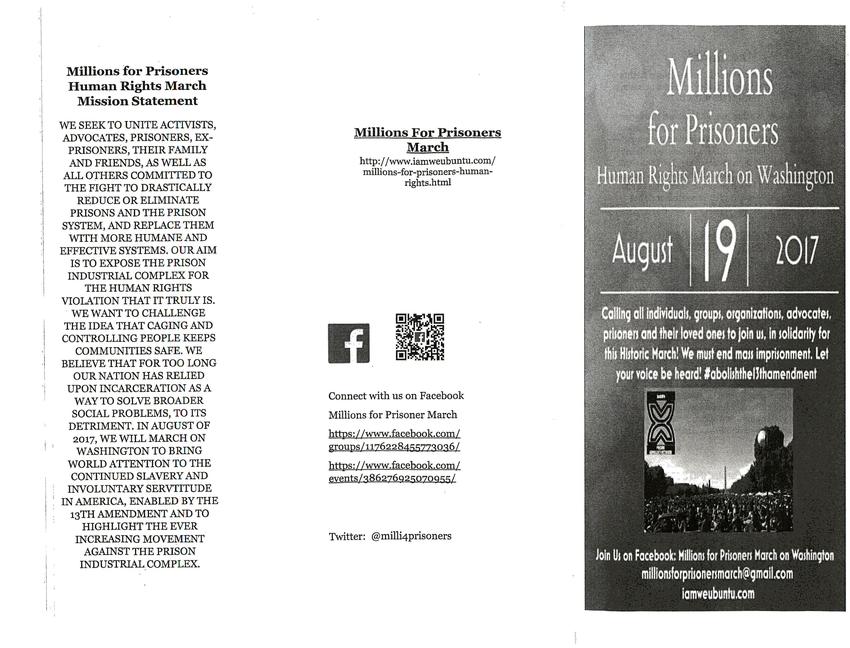 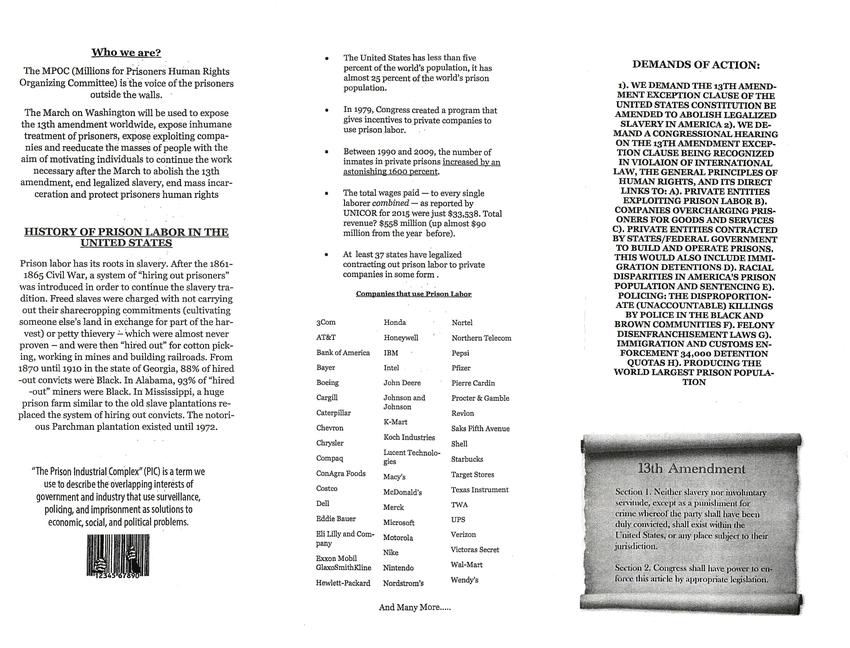 WE SEEK TO UNITE ACTIVISTS, ADVOCATES, PRISONERS, EX-PRISONERS, THEIR FAMILY AND FRIENDS, AS WELL AS ALL OTHERS COMMITTED TO THE FIGHT TO DRASTICALLY REDUCE OR ELIMINATE PRISONS AND THE PRISON SYSTEM, AND REPLACE THEM WITH MORE HUMANE AND EFFECTIVE SYSTEMS. OUR AIM IS TO EXPOSE THE PRISON INDUSTRIAL COMPLEX FOR THE HUMAN RIGHTS VIOLATION THAT IT TRULY IS. WE WANT TO CHALLENGE THE IDEA THAT CAGING AND CONTROLLING PEOPLE KEEPS COMMUNITIES SAFE. WE BELIEVE THAT FOR TOO LONG OUR NATION HAS RELIED UPON INCARCERATION AS A WAY TO SOLVE BROADER SOCIAL PROBLEMS, TO ITS DETRIMENT. IN AUGUST OF 2017, WE WILL MARCH ON WASHINGTON TO BRING WORLD ATTENTION TO THE CONTINUED SLAVERY AND INVOLUNTARY SERVTITUDE IN AMERICA, ENABLED BY THE 13TH AMENDMENT AND TO HIGHLIGHT THE EVER INCREASING MOVEMENT AGAINST THE PRISON INDUSTRIAL COMPLEX.

Calling on individuals, groups, organizations, advocates, prisoners and their loved ones to join us, in solidarity for this Historic March! We must end mass imprisonment. Let your voice be heard! #abolishthe13thamendment

Join Us on Facebook: Millions for Prisoners March on Washington
millionsforprisonersmarch@gmail.com
iamweubuntu.com

The MPOC (Millions for Prisoners Human Rights Organizing Committee) is the voice of the prisoners outside the walls.

The March on Washington will be used to expose the 13th amendment worldwide, expose inhumane treatment of prisoners, expose exploiting companies and re-educate the masses of people with the aim of motivating individuals to continue the work necessary after the March to abolish the 13th amendment, end legalized slavery, end mass incarceration and protect prisoners human rights

HISTORY OF PRISON LABOR IN THE UNITED STATES

Prison labor has its roots in slavery. After the 1861-1865 Civil War, a system of "hiring out prisoners" was introduced in order to continue the slavery tradition. Freed slaves were charged with not carrying out their sharecropping commitments (cultivating someone else's land in exchange for part of the harvest) or petty thievery - which were almost never proven - and were then "hired out" for cotton picking, working in mines and building railroads. From 1870 until 1910 in the state of Georgia, 88% of hired-out convicts were Black. In Alabama, 93% of "hired-out" miners were Black. In Mississippi, a huge prison farm similar to the old slave plantations replaced the system of hiring out convicts. The notorious Parchman plantation existed until 1972.

"The Prison Industrial Complex" (PIC) is a term we use to describe the overlapping interests of government and industry that use surveillance, policing, and imprisonment as solutions to economic, social, and political problems.

- In 1979, Congress created a program that gives incentives to private companies to use prison labor.

- Between 1990 and 2009, the number of inmates in private prisons increased by an astonishing 1600 percent.

- At least 37 states have legalized contracting out prison labor to private companies in some form.

Companies that use Prison Labor

1). WE DEMAND THE 13TH AMENDMENT EXCEPTION CLAUSE OF THE UNITED STATES CONSTITUTION BE AMENDED TO ABOLISH LEGALIZED SLAVERY IN AMERICA 2). WE DEMAND A CONGRESSIONAL HEARING ON THE 13TH AMENDMENT EXCEPTION CLAUSE BEING RECOGNIZED IN VIOLATION OF INTERNATIONAL LAW, THE GENERAL PRINCIPLES OF HUMAN RIGHTS, AND ITS DIRECT LINKS TO: A). PRIVATE ENTITIES EXPLOITING PRISON LABOR B). COMPANIES OVERCHARGING PRISONERS FOR GOODS AND SERVICES C). PRIVATE ENTITIES CONTRACTED BY STATES/FEDERAL GOVERNMENT TO BUILD AND OPERATE PRISONS. THIS WOULD ALSO INCLUDE IMMIGRATION DETENTIONS D). RACIAL DISPARITIES IN AMERICA'S PRISON POPULATION AND SENTENCING E). POLICING: THE DISPROPORTIONATE (UNACCOUNTABLE) KILLINGS BY POLICE IN THE BLACK AND BROWN COMMUNITIES F). FELONY DISENFRANCHISEMENT LAWS G). IMMIGRATION AND CUSTOMS ENFORCEMENT 34,000 DETENTION QUOTAS H). PRODUCING THE WORLD LARGEST PRISON POPULATION

Section 1. Neither slavery nor involuntary servitude, except as a punishment for crime whereof the party shall have been duly convicted, shall exist within the United States, or any place subject to their jurisdiction.

Section 2. Congress shall leave power to enforce this article by appropriate legislation.