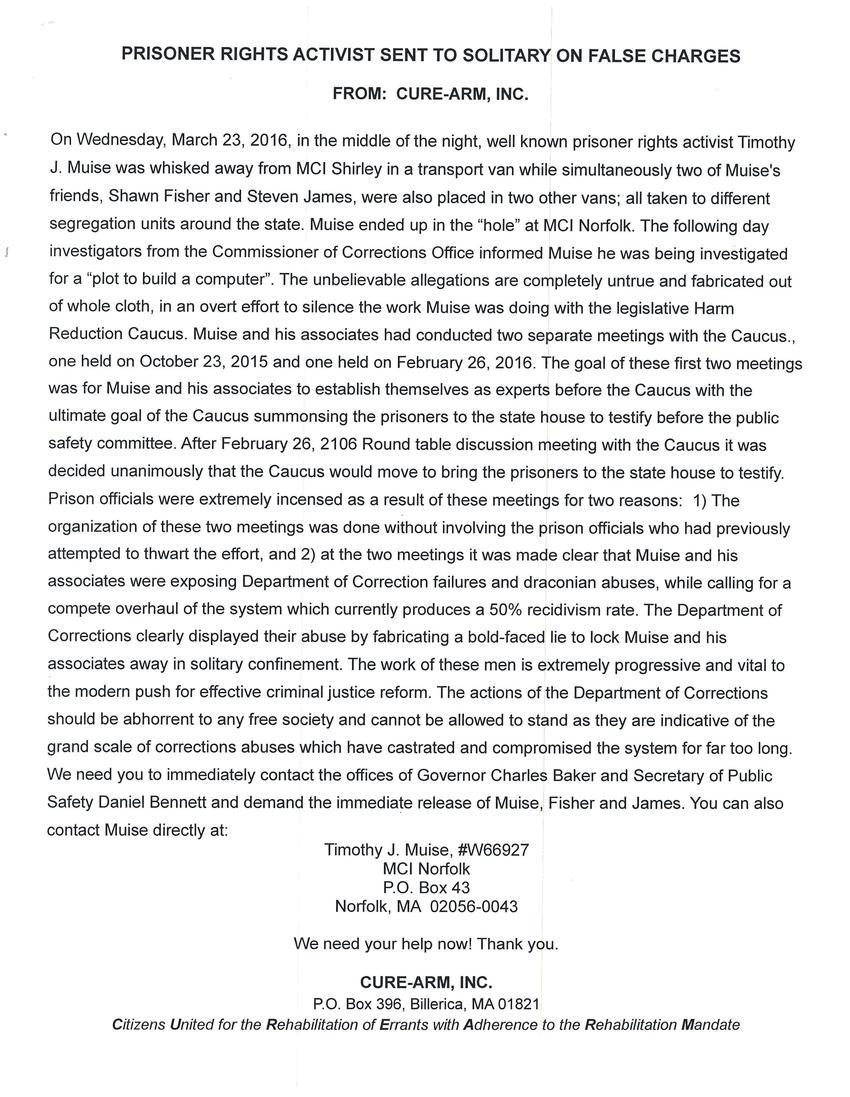 On Wednesday, March 23, 2016, in the middle of the night, well know prisoner rights activist Timothy J. Muise was whisked away from MCI Shirley in a transport van while simultaneously two of Muise's friends, Shawn Fisher and Steven James, were also placed in two other vans; all taken to different segregation units around the state. Muise ended up in the "hole" at MCI Norfolk. The following day investigators from the Commissioner of Corrections Office informed Muise he was being investigated for a "plot to build a computer". The unbelievable allegations are completely untrue and fabricated out of whole cloth, in an overt effort to silence the work Muise was doing with the legislative Harm Reduction Caucus. Muise and his associates had conducted two separate meetings with the Caucus., one held on October 23, 2015 and one held on February 26, 2016. The goal of these first two meetings was for Muise and his associates to establish themselves as experts before the Caucus it was decided unanimously that the Caucus would move to bring the prisons to the state house to testify. Prison officials were extremely incensed as a result of these meetings for two reasons: 1) The organization of these two meetings was done without involving the prison officials who had previously attempted to thwart the effort, and 2) at the two meetings it was made clear that Muise and his associates were exposing Department of Correction failures and draconian abuses, while calling for a complete overhaul of the system which currently produces a 50% recidivism rate. The Department of Corrections clearly displayed their abuse by fabricating a bold-faced lie to lock Muise and his associates away in solitary confinement. The work of these men is extremely progressive and vital to the modern push for effective criminal justice reform. The actions of the Department of Corrections should be abhorrent to any free society and cannot be allowed to stand as they are indicative of the grand scale of corrections abuses which have castrated and compromised the system for far too long. We need you to immediately contact the offices of Governor Charles Baker and Secretary of Public Safety Daniel Bennett and demand the immediate release of Muise, Fisher and James. You can also contact Muise directly at:

We need your help now! Thank you.