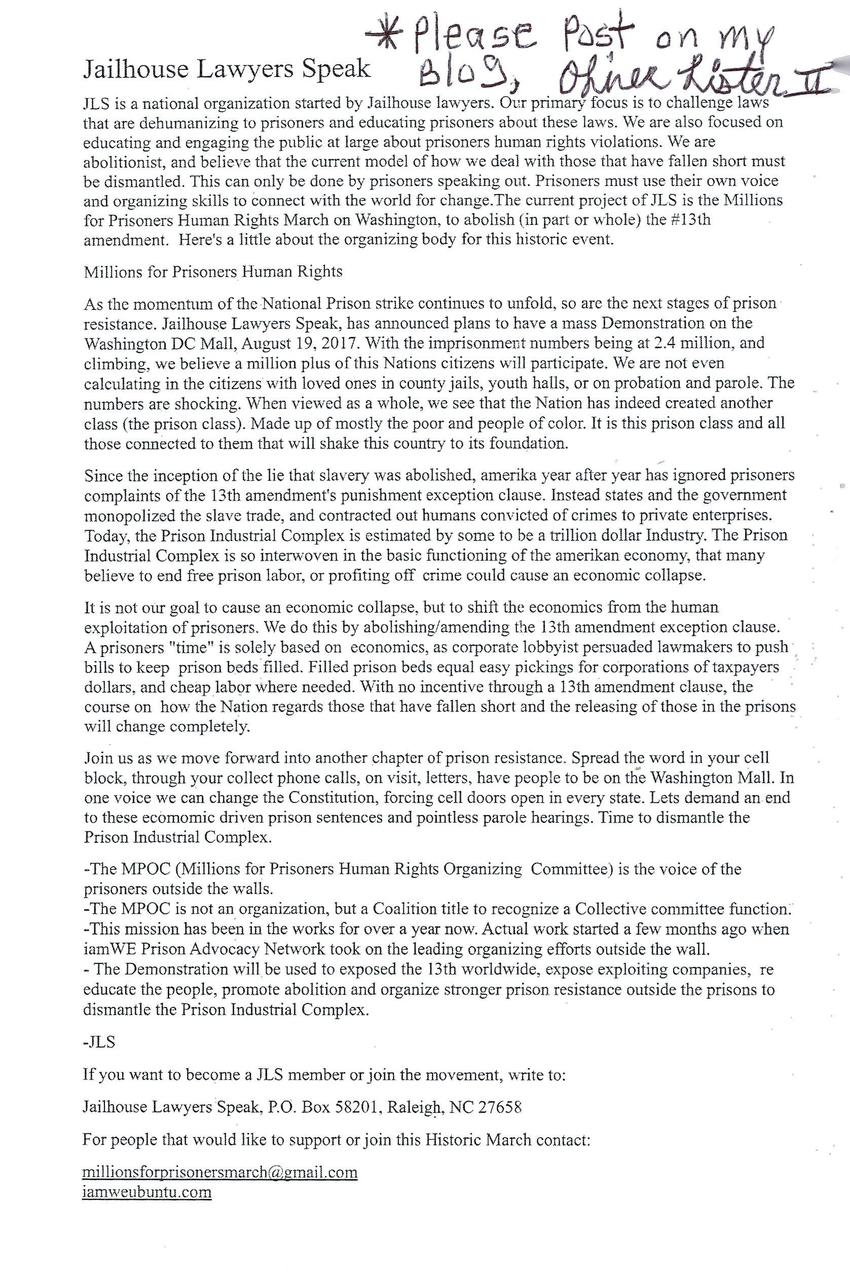 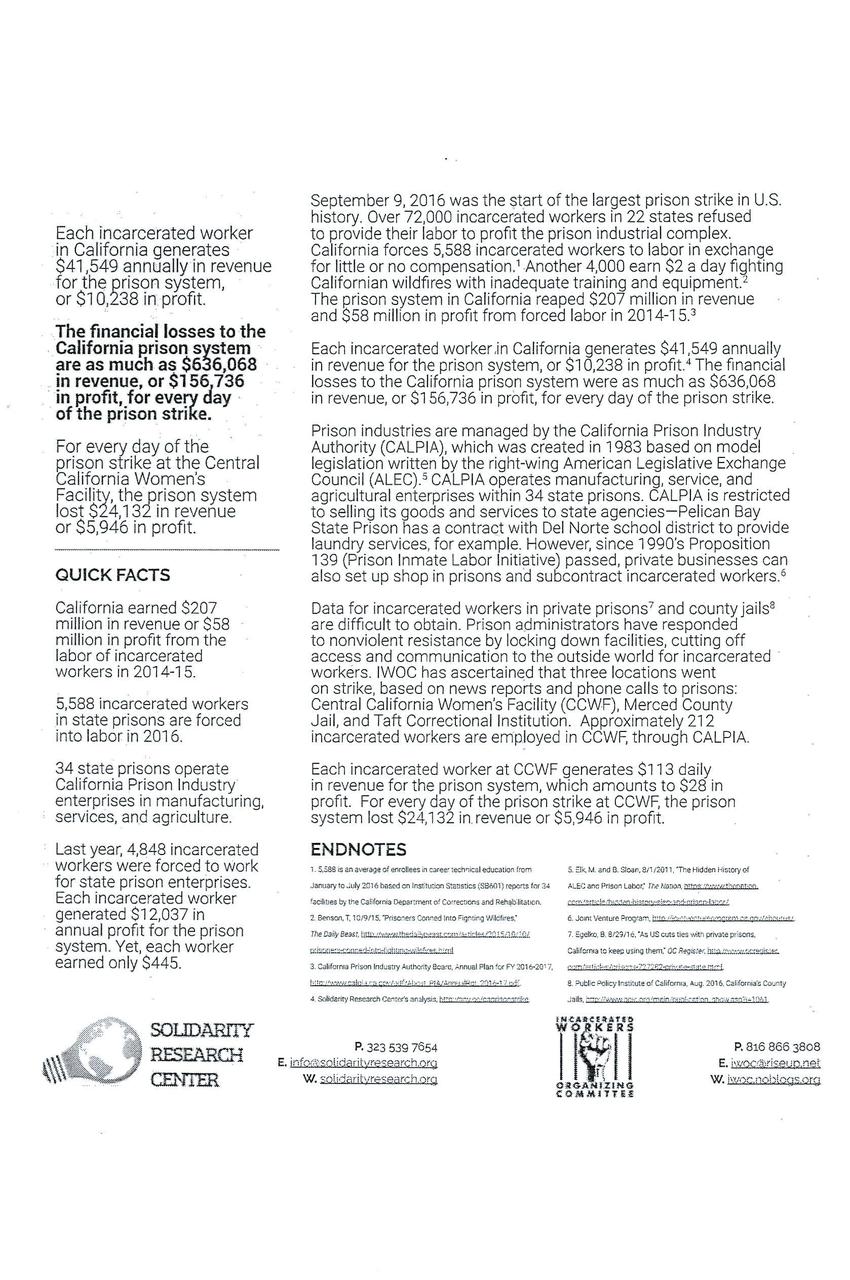 JLS is a national organization started by Jailhouse lawyers. Our primary focus is to challenge laws that are dehumanizing to prisoners and educating prisoners about these laws. We are also focused on educating and engaging the public at large about prisoners human rights violations. We are abolitionist, and believe that the current model of how we deal with those that have fallen short must be dismantled. This can only be done by prisoners speaking out. Prisoners must use their own voice and organizing skills to connect with the world for change. The current project of JLS is the Millions for Prisoners Human Rights March on Washington, to abolish (in part or whole) the #13th amendment. Here's a little about the organizing body for this historic event.

As the momentum of the National Prison strike continues to unfold, so are the next stages of prison resistance. Jailhouse Lawyers Speak, has announced plans to have a mass Demonstration on the Washington DC Mall, August 19, 2017. With the imprisonment numbers being at 2.4 million, and climbing, we believe a million plus of this Nations citizens will participate. We are not even calculating in the citizens with loved ones in county jails, youth halls, or on probation and parole. The numbers are shocking. When viewed as a whole, we see that the Nation has indeed created another class (the prison class). Made up of mostly the poor and people of color. It is this prison class and all those connected to them that will shake this country to its foundation.

Since the inception of the lie that slavery was abolished, amerika year after year has ignored prisoner complaints of the 13th amendment's punishment exception clause. Instead states and the government monopolized the slave trade, and contracted out humans convicted of crimes to private enterprises. Today, the Prison Industrial Complex is estimated by some to be a trillion dollar Industry. The Prison Industrial Complex is so interwoven in the basic functioning of the amerikan economy, that many believe to end free prison labor, or profiting off crime could cause an economic collapse.

It is not our goal to cause an economic collapse, but to shift the economics from the human exploitation of prisoners. We do this by abolishing/amending the 13th amendment exception clause. A prisoners "time" is solely based on economics, as corporate lobbyist persuaded lawmakers to push bills to keep prison beds filled. Filled prison beds equal easy pickings for corporations of taxpayers dollars, and cheap labor where needed. With no incentive through a 13th amendment clause, the course on how the Nation regards those that have fallen short and the releasing of those in the prisons will change completely.

Join us as we move forward into another chapter of prison resistance. Spread the word in your cell block, through your collect phone calls, on visit, letters, have people to be on the Washington Mall. In one voice we can change the Constitution, forcing cell doors open in every state. Lets demand an end to these economic driven prison sentences and pointless parole hearings. Time to dismantle the Prison Industrial Complex.

-The MPOC (Millions for Prisoners Human Rights Organizing Committee) is the voice of the prisoners outside the walls.
-The MPOC is not an organization, but a Coalition title to recognize a Collective committee function.
-This mission has been in the works for over a year now. Actual work started a few months ago when iamWE Prison Advocacy Network took on the leading organizing efforts outside the wall.
-The Demonstration will be used to expose the 13th worldwide, expose exploiting companies, re educate the people, promote abolition and organize stronger prison resistance outside the prisons to dismantle the Prison Industrial Complex.

If you want to become a JLS member or join the movement, write to:

Each incarcerated worker in California generates $41,549 annually in revenue for the prison system, or $10,238 in profit.

The financial losses to the California prison system are as much as $636,068 in revenue, or $156,736 in profit, for every day of the prison strike.

For every day of the prison strike at the Central California Women's Facility, the prison system lost $24,132 in revenue or $5,946 in profit.

California earned $207 million in revenue or $58 million in profit from the labor of incarcerated workers in 2014-15.

5,588 incarcerated workers in state prisons are forced into labor in 2016.

September 9, 2016 was the start of the largest prison strike in U.S. history. Over 72,000 incarcerated workers in 22 states refused to provide their labor to profit the prison industrial complex. California forced 5,588 incarcerated workers to labor in exchange for little or no compensation.^1 Another 4,000 earn $2 a day fighting Californian wildfires with inadequate training and equipment.^2 The prison system in California reaped $207 million in revenue and $58 million in profit from forced labor in 2014-15.^3

Prison industries are managed by the California Prison Industry Authority (CALPIA), which was created in 1983 based on model legislation written by the right-wing American Legislative Exchange Council (ALEC).^5 CALPIA operates manufacturing, service, and agricultural enterprises within 34 state prisons. CALPIA is restricted to selling its goods and services to state agencies - Pelican Bay State Prison has a contract with Del Norte school district to provide laundry services, for example. However, since 1990's Proposition 139 (Prison Inmate Labor Initiative) passed, private businesses can also set up shop in prisons and subcontract incarcerated workers.^6

Data for incarcerated workers in private prisons7 and county jails8 are difficult to obtain. Prison administrators have responded to nonviolent resistance by locking down facilities, cutting off access and communication to the outside world for incarcerated workers. IWOC has ascertained that three locations went on strike, based on news reports and phone calls to prisons: Central California Women’s Facility (CCWF), Merced County Jail, and Taft Correctional Institution. Approximately 212 incarcerated workers are employed in CCWF, through CALPIA.