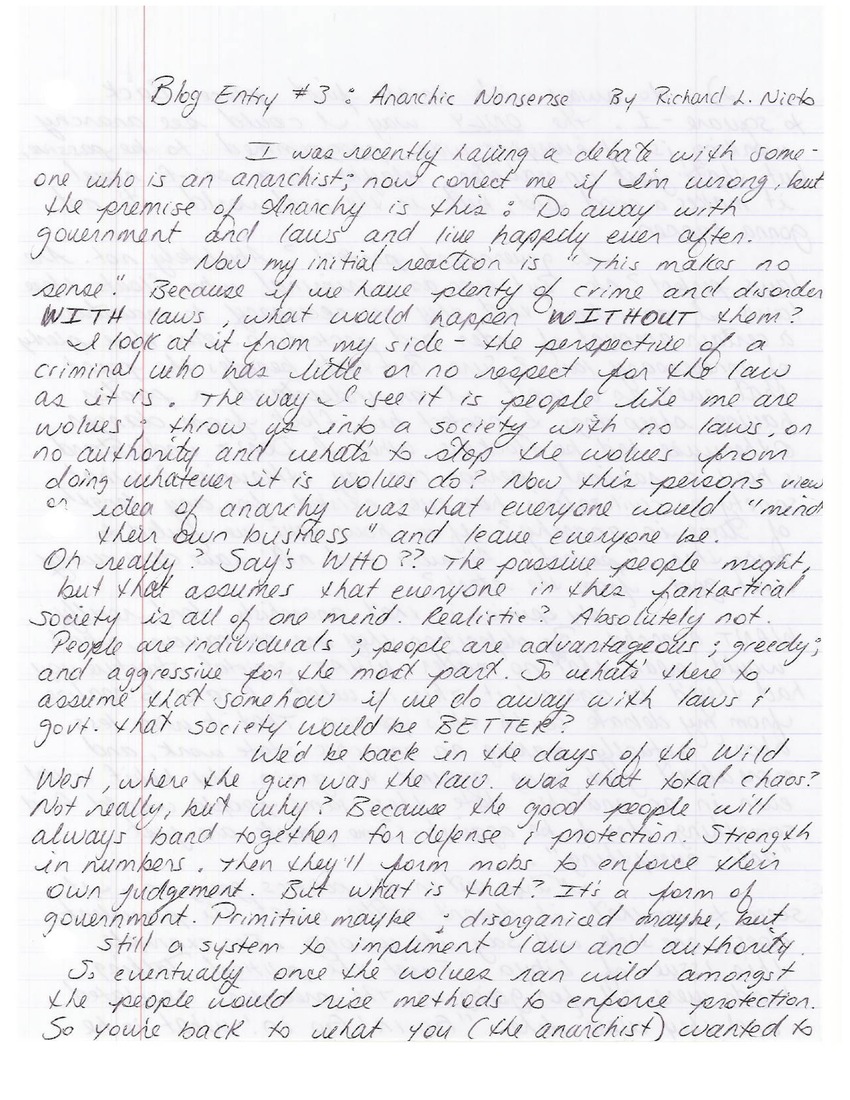 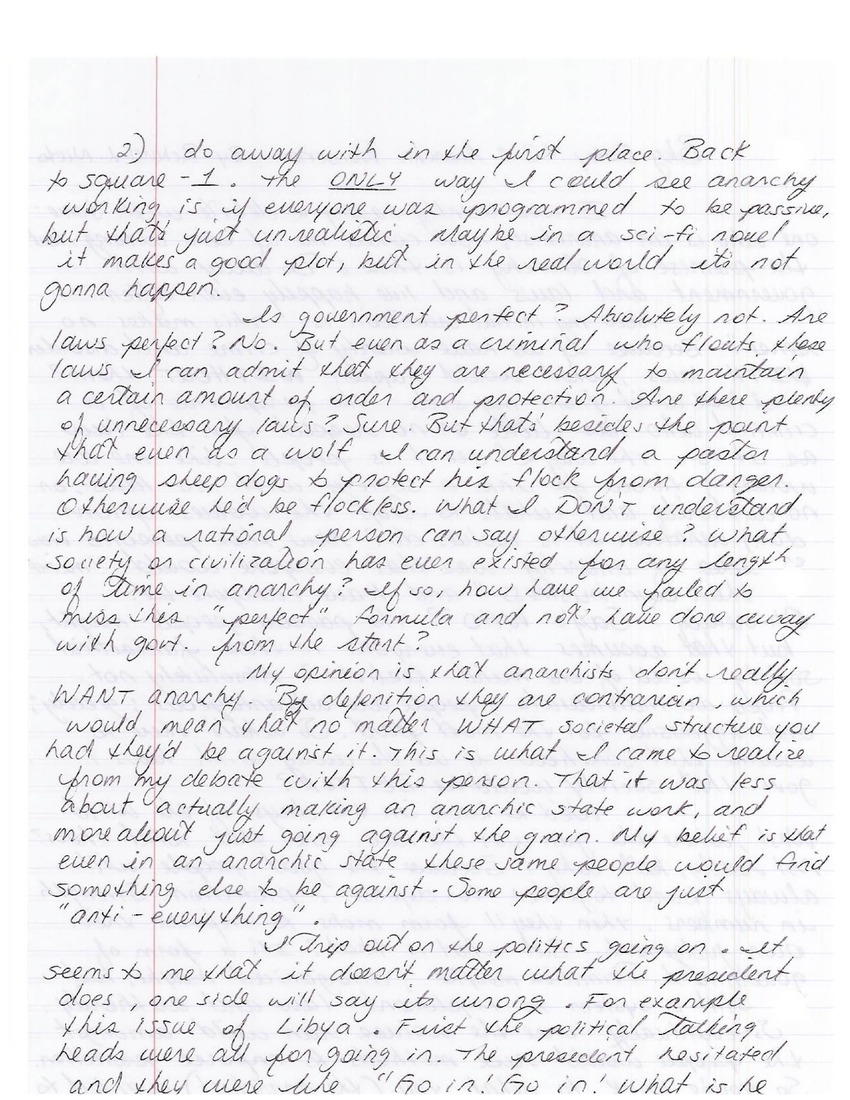 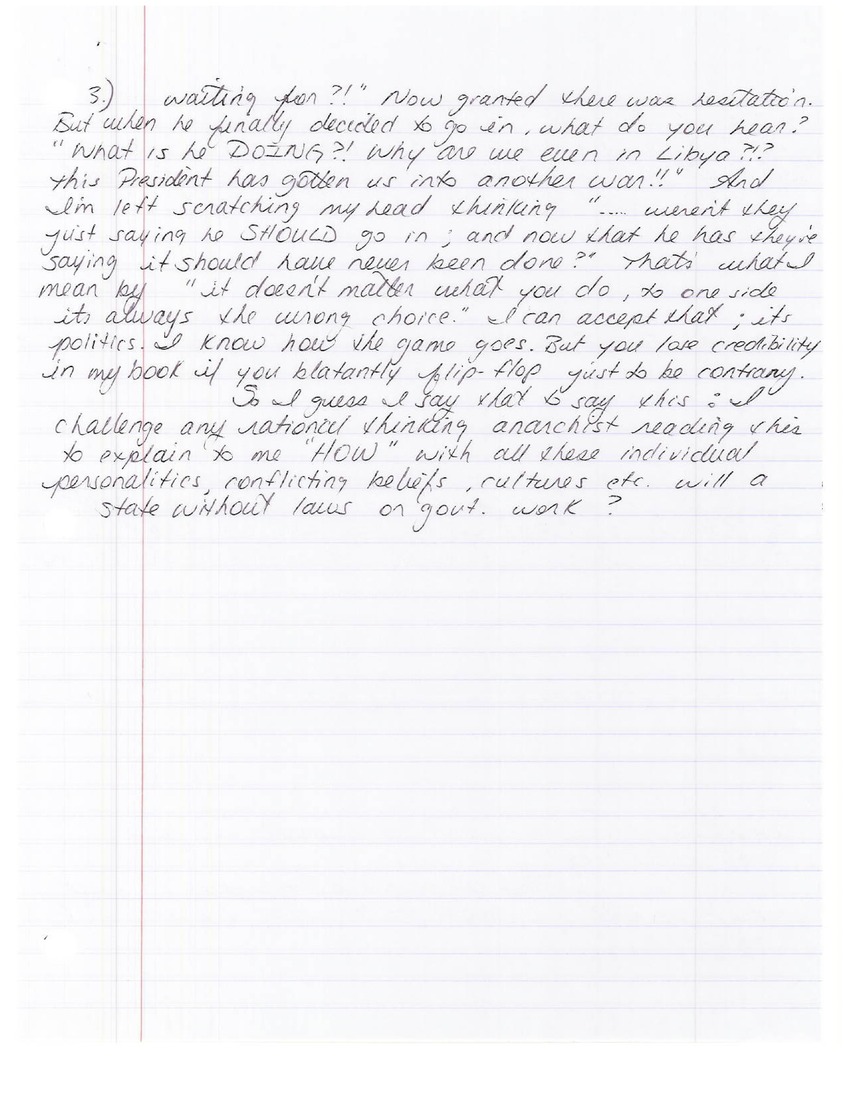 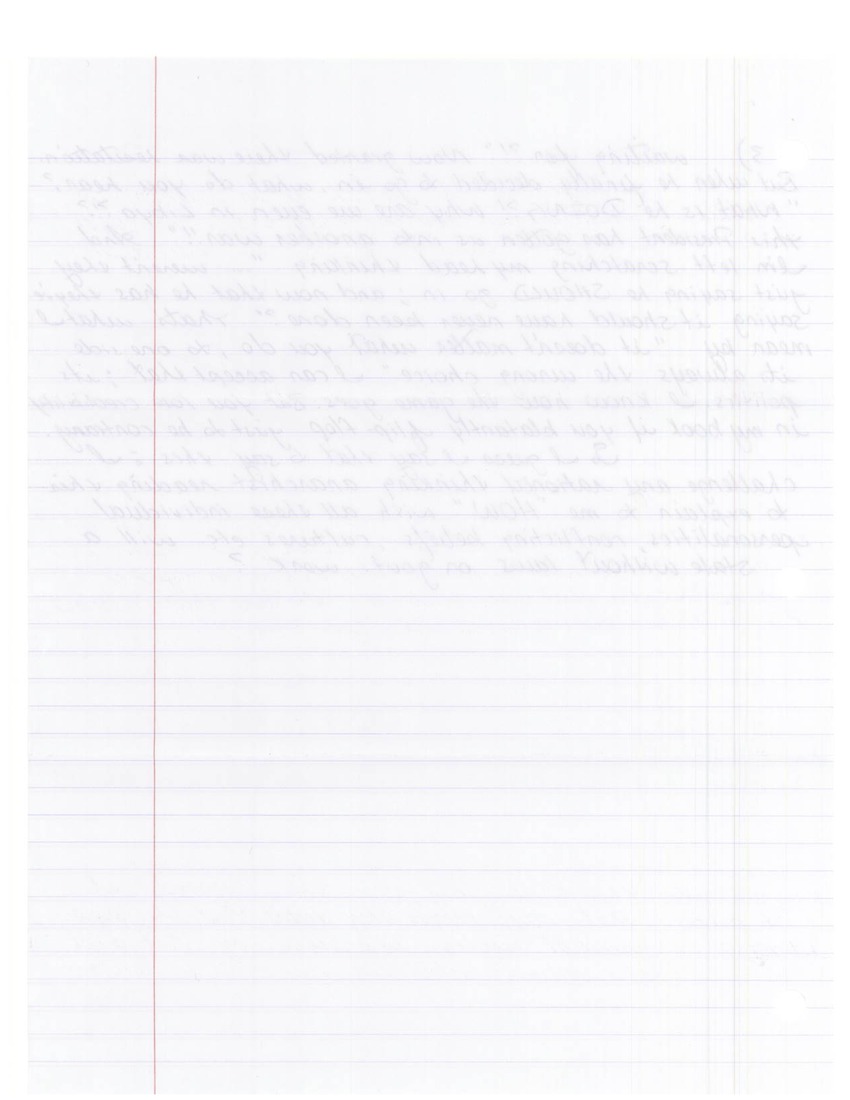 I was recently having a debate with someone who is an anarchist; now correct me if I'm wrong, but the premise if Anarchy is this: Do away with government and laws and live happily ever after.

Now my initial reaction is "This makes no sense." Because if we have plenty of crime and disorder WITH laws, what would happen WITHOUT them? I look at it from my side - the perspective of a criminal who has little or no respect for the law as it is. The way I see it is people like me are wolves; throw us into a society with no laws or no authority and what's to stop the wolves from doing whatever it is wolves do? Now this person's view of anarchy was that everyone would "mind their own business" and leave everyone be.

Oh really? Say's WHO?? The passive people might but that assumes that everyone is this fantastical society is all of one mind. Realistic? Absolutely not. People are individuals; people are advantageous; greedy; and aggressive for the most part. So what's there to assume that somehow if we do away with laws & government, that society would be BETTER?

We'd be back in the days of the Wild West, where the gun was the law. Was that total chaos? Not really, but why? Because the good people will always band together for defense & protection. Strength in numbers. Then they'll form mobs to enforce their own judgement. But what is that? It's a form of government. Primitive maybe; disorganised maybe, but still a system to implement law and authority.

So eventually once the wolves ran wild amongst the people would use methods to enforce protection. So you're back to what you (the anarchist) wanted to do away with in the first place. Back to square-1. The ONLY way I could see anarchy working is if everyone was programmed to be passive, but that's just unrealistic, maybe in a sci-fi novel it makes a good plot, but in the real world it's not gonna happen.

Is government perfect? Absolutely not. Are laws perfect? No. But even as a criminal who flouts these laws I can admit that they are necessary to maintain a certain amount of order and protection. Are there plenty of unnecessary laws? Sure. But that's besides the point that even a as a wolf I can understand a pastor having sheep dogs to protect his flock from danger. Otherwise he'd be flockless. What I DON'T understand is how a rational person can say otherwise? What society or civilization has even existed for any length of time in anarchy? If so, how have we failed to miss this "perfect" formula and not have done away with govt. from the start?

My opinion is that anarchists don't really WANT anarchy. By definition they are contrarian, which would mean that no matter WHAT societal structures you had they'd be against it. This is what I came to realise from my debate with this person. That is was less about actually making an anarchic state work and more about just going against the grain. My belief is that even in an anarchic state these same people would find something else to be against. Some people are just "anti-everything".

[illegible] out on the politics going on. It seems to me that it doesn't matter what the president does, one side will say it's wrong. For example this issue of Libya. First the political talking heads were all for going in. The president hesitated and they wer like "Go in, Go in, What is he waiting for?!" Now granted there was hesitation. But when he finally decided to go in, what do you hear? "What is he DOING?! Why are we even in Libya?!? this President has gotten us into another war!!" And I'm left scratching my head thinking "... weren't they just saying he SHOULD go in; and now that he has they're saying it should have never been done?" That's what I mean by "it doesn't matter what you do, to one side it's always the wrong choice." I can accept that; it's politics. I know how the game goes. But you lose credibility in my book if you blatantly flip-flop just to be the contrary.

So I guess I say that to say this: I challenge any rational thinking anarchist reading this to explain to me "HOW" with all these individual personalities, conflicting beliefs, cultures etc. will a state without laws or govt. work?