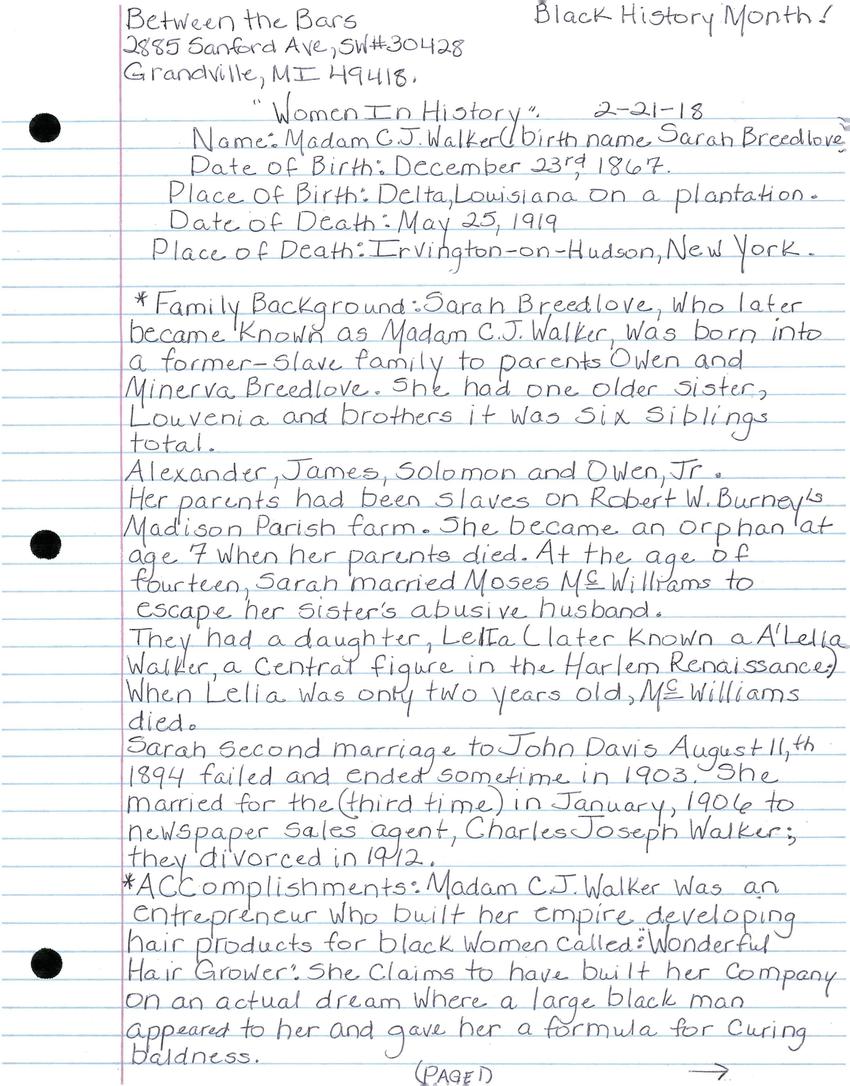 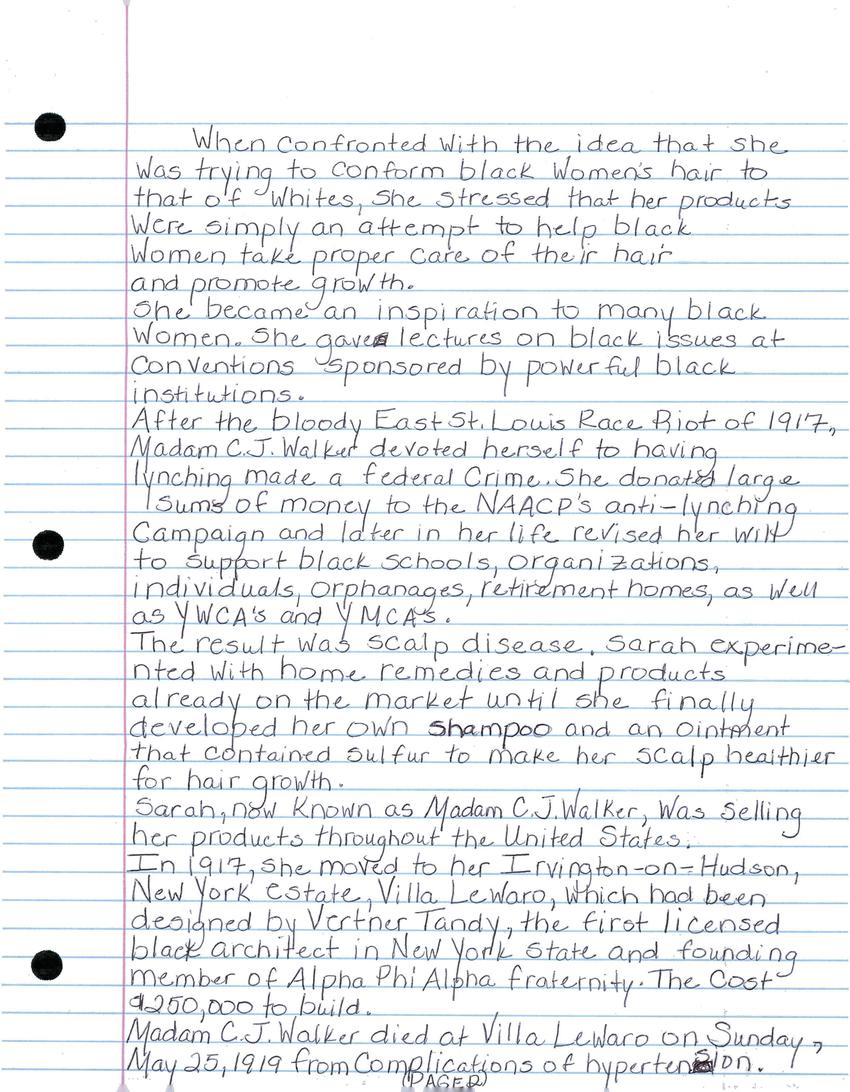 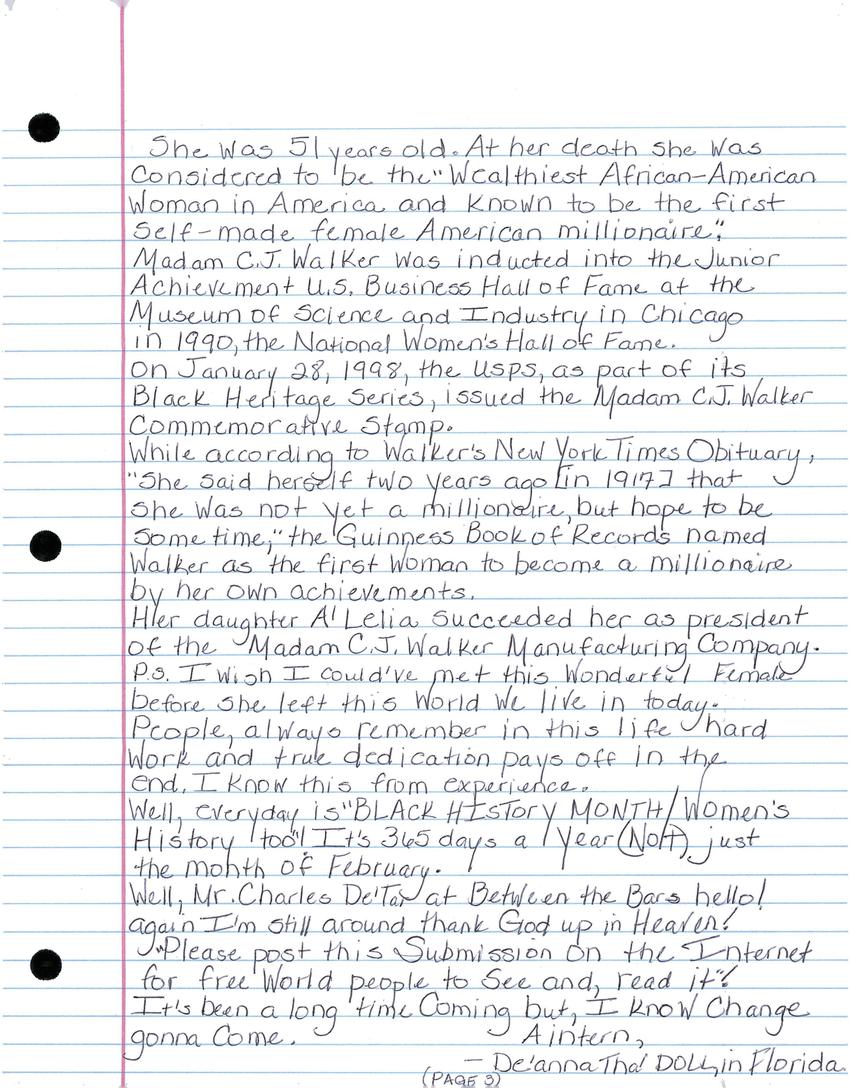 *Family Background: Sarah Breedlove, who later became known as Madam C.J. Walker, was born into a former-slave family to parents Owen and Minerva Breedlove. She had one older sister, Louvenia and brothers it was six siblings total.
Alexander, James, Solomon and Owen, Jr.
Her parents had been slaves on Robert w. Burney's Madison Parish farm. She became an orphan at age 7 when her parents died. At the age of fourteen, Sarah married Moses McWilliams to escape her abusive husband.
They had a daughter, Lelia (later known a A'Lelia Walker, a central figure in the Harlem Renaissance.) When Lelia was only two years old, McWilliams died.
Sarah second marriage to John Davis August 11th 1894 failed and ended sometime in 1903. She married for the (third time) in January, 1906 to newspaper sales agent, Charles Joseph Walker; they divorced in 1912.
*Accomplishments: Madam C.J. Walker was an entrepreneur who built her empire developing hair products for black women called: "Wonderful Hair Grower". She claims to have built her company on an actual dream where a large black man appeared to her and gave her a formula for curing baldness.

When confronted with the idea that she was trying to conform black women's hair to that of whites, she stressed that her products were simply an attempt to help black women take proper care of their hair and promote growth.
She became an inspiration to many black women. She gave lectures on black issues at conventions sponsored by powerful black institutions.
After the bloody East St. Louis Race Riot of 1917, Madam C.J. Walker devoted herself to having lynching made a federal crime. She donated large sums of money to the NAACP's anti-lunching campaign and later in her life revised her will to support black schools, organizations, individuals, orphanages, retirement homes, as well as YWCA's and YMCA's.
The result was scalp disease. Sarah experimented with home remedies and products already on the market until she finally developed her own shampoo and an ointment that contained sulphur to make her scalp healthier for hair growth.
Sarah, now known as Madam C.J. Walker, was selling her products throughout the United States.
In 1917, she moved to her Irvington-on-Hudson, New York estate, Villa Lewaro, which had been designed by Vertner Tandy, the first licensed black architect in New York state and founding member of Alpha Phi Alpha fraternity. The cost $250,000 to build.
Madam C.J. Walker died at Villa Lewaro on Sunday, May 25, 1919 from complications of hypertension.

She was 51 years old. At her death she was considered to be the "Wealthiest African-American woman in America and known to be the first self-made female American millionaire".
Madam C.J. Walker was inducted into the Junior Achievement U.S. Business Hall of Fame at the Museum of Science and Industry in Chicago in 1990, the National Women's Hall of Fame.
On January 28, 1998, the USPS, as part of its Black Heritage series, issued the Madam C.J. Walker Commemorative Stamp.
While according to Walker's New York Times Obituary, "she said herself two years ago [in 1917] that she was not yet a millionaire, but hope to be sometime," the Guinness Book of Records named Walker as the first woman to become a millionaire by her own achievements.
Her daughter A'Lelia succeeded her as president of the Madam C.J. Walker Manufacturing Company.
P.S. I wish I could've met this wonderful female before she left this world we live in today.
People, always remember in this life hard work and true dedication pays off in the end. I know this from experience.
Well, everyday is "BLACK HISTORY MONTH/WOMEN'S HISTORY too"! It's 365 days a year (NOT) just the month of February.
Well, Mr. Charles De'Tar at Between the Bars hello! again I'm still around thank God up in Heaven!
"Please post this submission on the internet for free world people to see and ready it"!
It's been a long time coming but, I know change gonna come.

Thanks for writing! I finished the transcription for your post.
I am a post-editor 4 the WRITE OR DIE ZINE Facebook page. Our Facebook page was started by California Death Row inmate authors such as yourself, and thier BtB (between the bars.org) group blog "Papyrus Collective" is the only group blog on BtB.

YOU are one of only a few Death Row inmates on the BtB website, and we're looking for those of you who would like 2 join our group of Death Row post-editors here on Facebook. Anything about you or your blog, you can share on the Facebook page. we can send out invites and have your people to follow your post on Facebook as well. Each post is linked back to your Blog post on BtB. Our prisoner support group also provide some Digital Media resources as well.

If you are interested send a REPLY to this post. Include your photo, icon, or Avatar you want to include with your Facebook post, as well as any other images or artwork. We will create a Facebook photo album for those images and either make it public or keep it private to use in your Facebook posts.

.Get at me if you have any questions. We look forward to hearing from you.