The Good, The Bad, and The Ugly 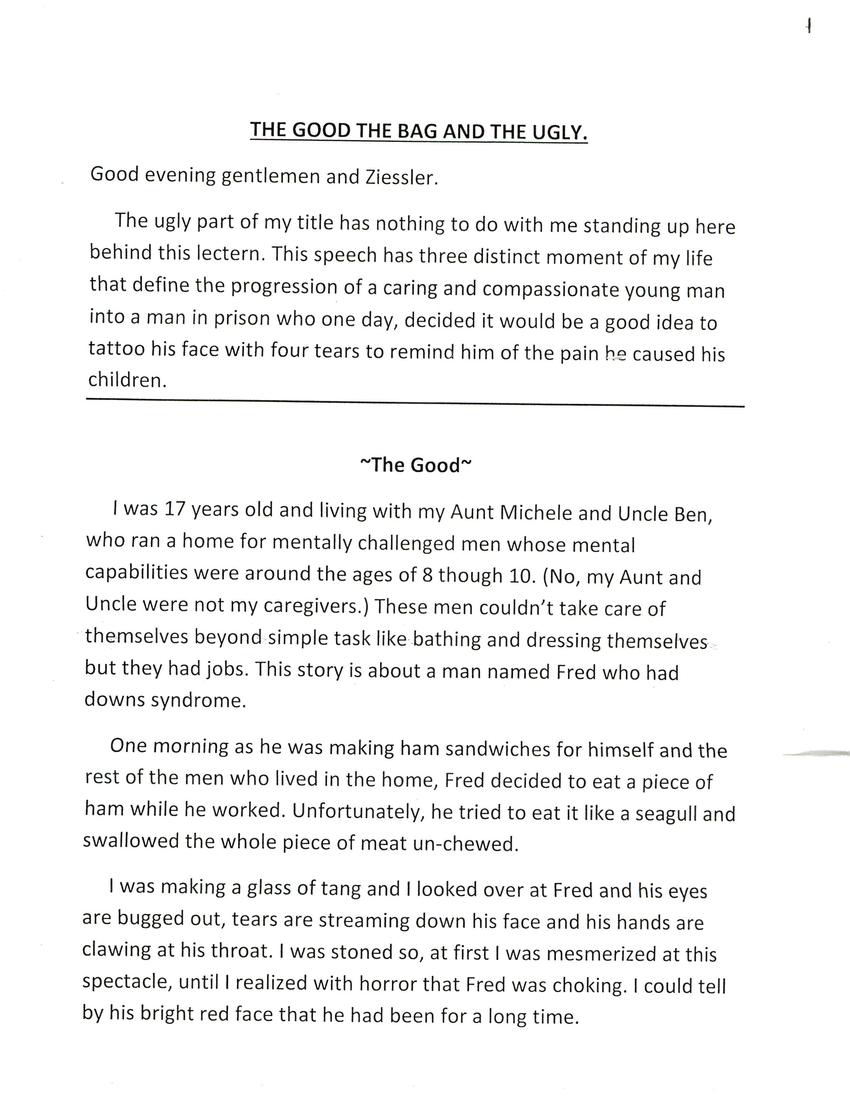 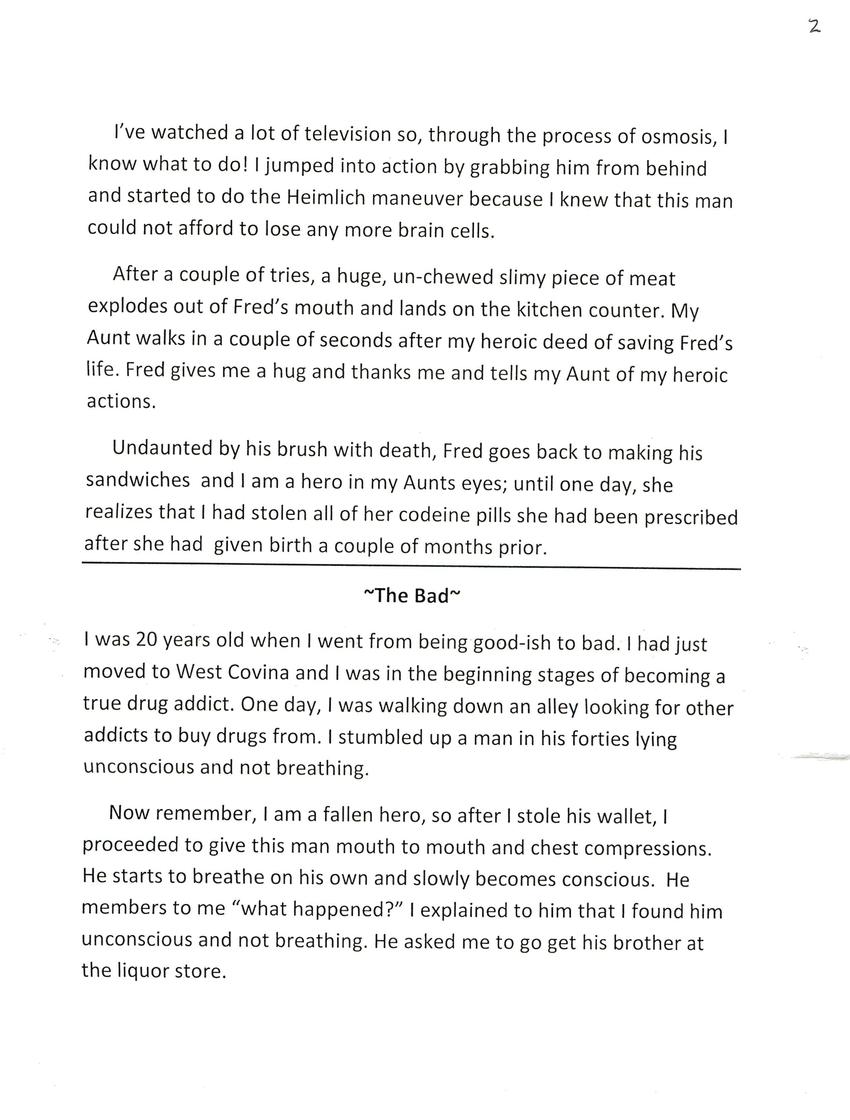 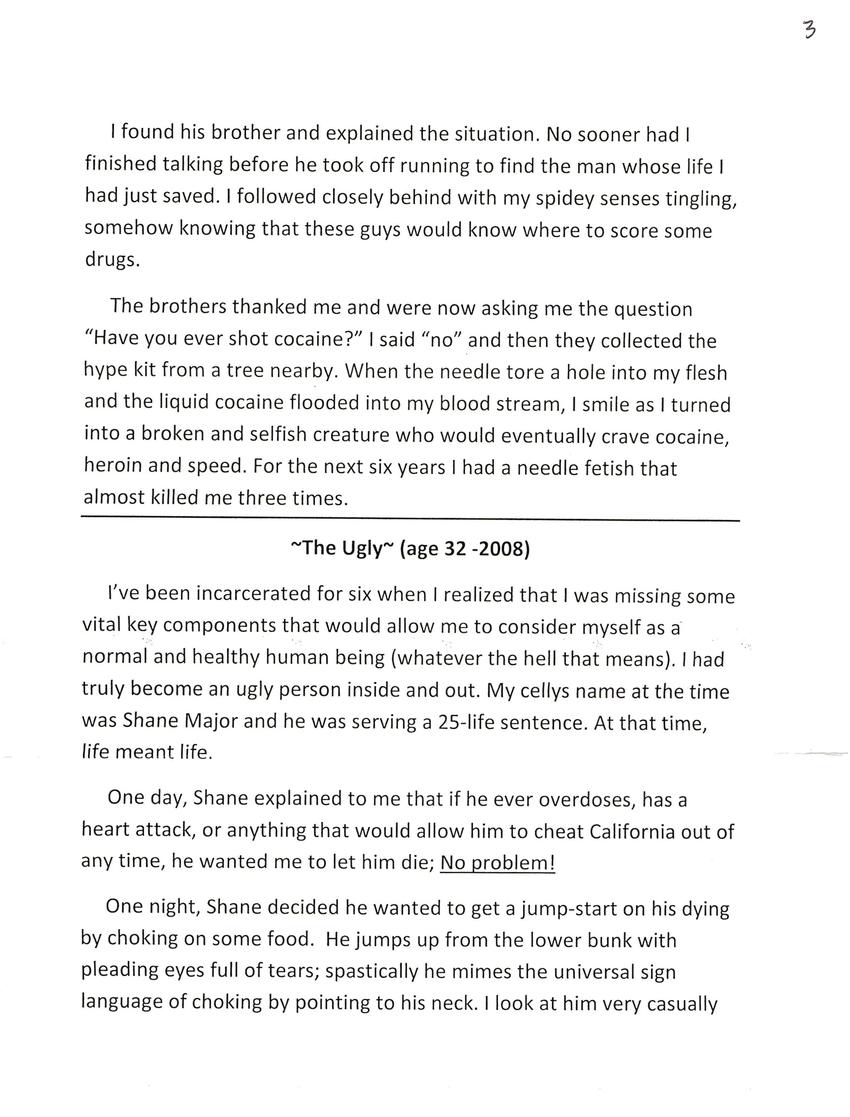 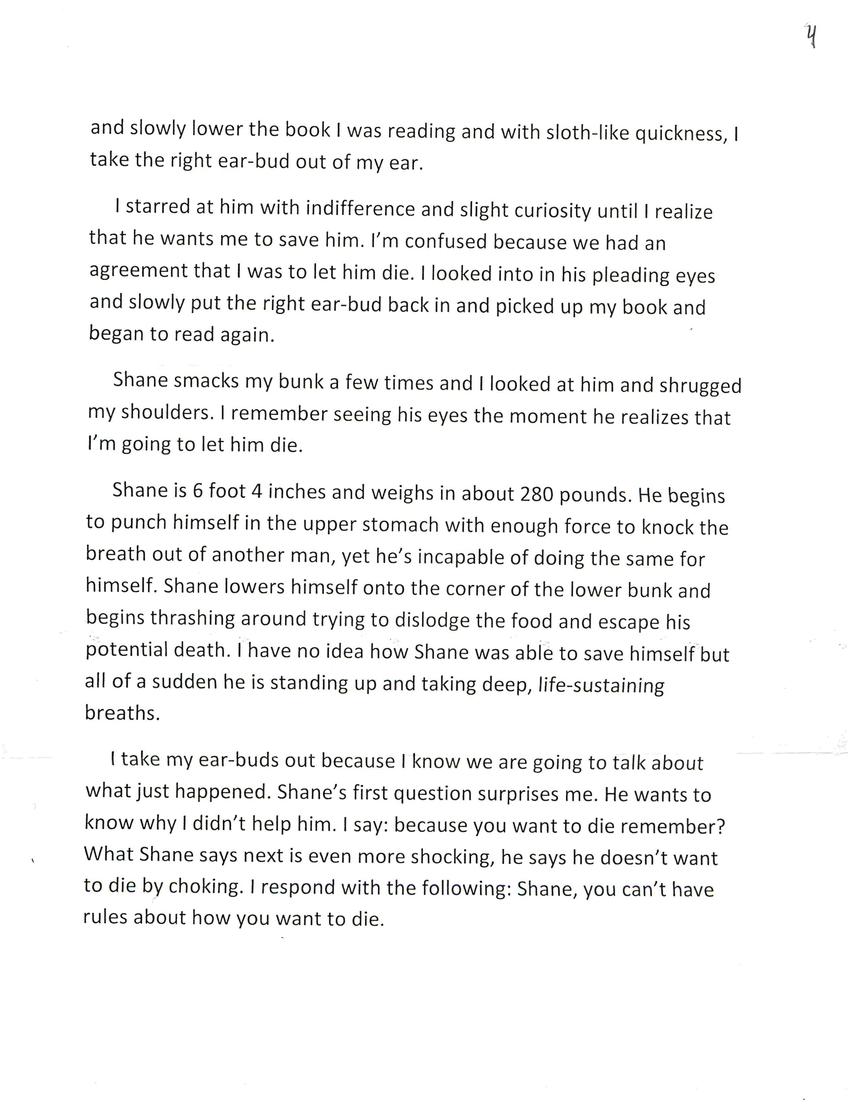 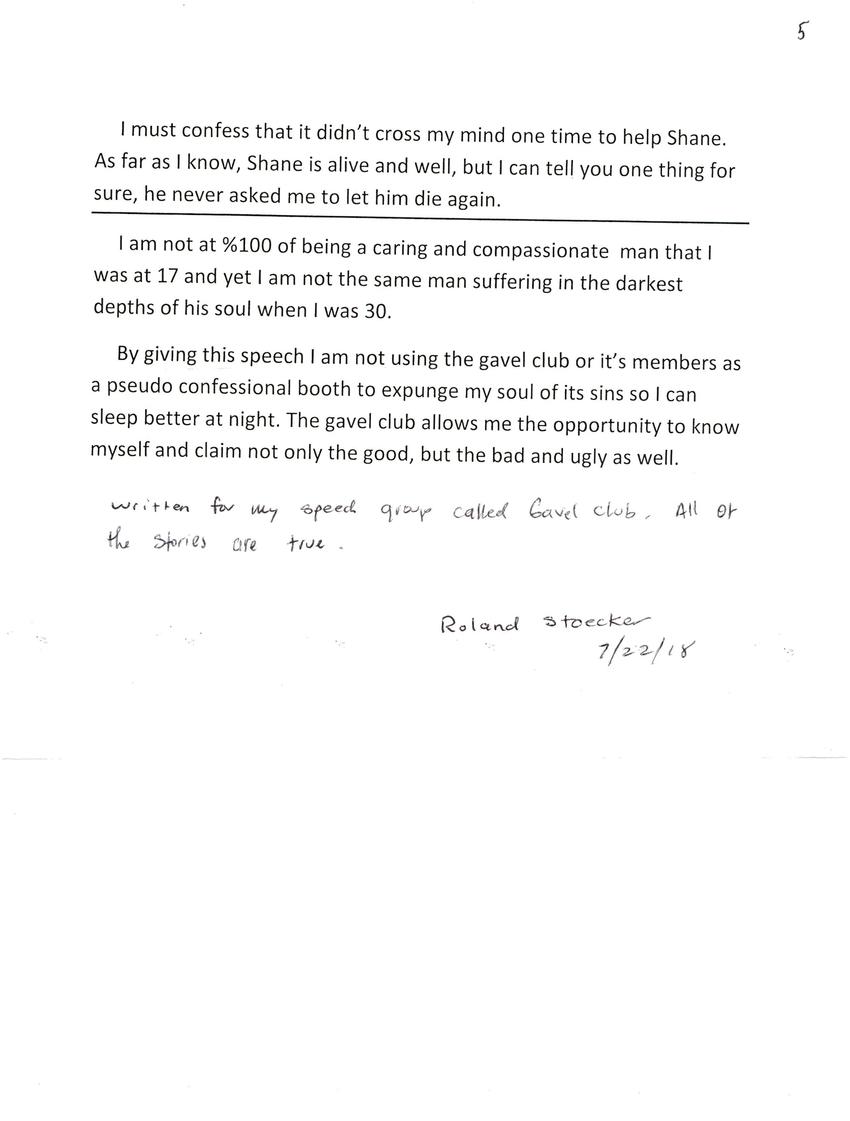 THE GOOD, THE BAD, AND THE UGLY

The ugly part of my title has nothing to do with me standing up behind this lectern. This speech has three distinct moments of my life that define the progression of a caring and compassionate young man into a man in prison who, one day, decided it would be a good idea to tattoo his face with four tears to remind him of the pain he caused his children.

~The Good~
I was 17 years old and living with my Aunt Michele and Uncle Ben who ran a home for mentally challenged men whose mental capabilities were around the ages of 8 through 20 (No, my aunt and uncle were not my caregivers). These men couldn't take care of themselves beyond simple tasks like bathing and dressing themselves, but they had jobs.

This story is about a man named Fred who had Down's syndrome. One morning, as he was making ham sandwiches for himself and the rest of the men who lived in the home, Fred decided to eat a piece of ham while he worked. Unfortunately, he tried to eat it like a seagull and swallowed the whole piece of meat unchewed.

I was making a glass of Tang and I looked over at Fred, and his eyes are bugged out, tears streaming down his face, and his hands are clawing at his throat. I was stoned so, at first, I was mesmerized at this spectacle until I realized with horror that Fred was choking. I could tell by his bright red face that he had been for a long time.

I've watched a lot of television so, through the process of osmosis, I knew what to do! I jumped into action by grabbing him from behind and doing the Heimlich maneuver because I knew this man could not afford to lose anymore brain cells. After a couple of tries, a huge, unchewed, slimy piece of meat explodes out of Fred's mouth and lands on the kitchen counter. My aunt walks in a couple of seconds after my heroic deed. Fred gives me a hug and thanks me before he tells my aunt what I did.

Undaunted by his brush with death, Fred goes back to making his sandwiches and I'm a hero in my aunt's eyes—until one day, she realizes that I had stolen all of her codeine pills she had been prescribed after she gave birth a couple of months prior.

~The Bad~
I was 20 years old when I went from being goodish to bad. I had just moved to West Covina and I was in the beginning stages of becoming a true drug addict. One day, I was walking down an alley looking for other addicts to buy drugs from. I stumbled on a man in his forties lying unconscious and not breathing.

Now remember, I am a fallen hero.

So after I stole his wallet, I proceeded to give this man mouth to mouth and chest compressions. He starts to breathe on his own and slowly becomes conscious. He mummers to me, "What happened?" I explained how I found him, and he asked me to get his brother at the liquor store. I found his brother and explained the situation. No sooner had I finished talking before he took off running to find the man whose life I just saved. I followed closely behind with my spidey sense tingling, somehow knowing that these guys would know where to score some drugs.

The brothers thanked me and were now asking me questions. "Have you ever shot cocaine?" "No." Then they collected the hype kit from a tree nearby. When the needle tore into my flesh and the liquid cocaine flooded my blood stream, I smiled and turned into a broken and selfish creature who would eventually crave cocaine, heroin, and speed. For the next six years, I had a needle fetish that almost killed me three times.

~The Ugly~
Age 32 (2008)
I've been incarcerated for six years when I realized that I was missing some vital components that would allow me to look at myself as a normal and healthy human being—whatever the hell that means. I had truly become an ugly person, inside and out.

My celly at the time was Shane Major, and he was serving a 25 to life sentence. At that time, life meant life. One day, Shane explained to me that if he ever overdoses, has a heart attack, or anything that would allow him to cheat California out of any time, he wanted me to let him die. No problem!

One night, Shane decided to get a jump-start on his dying by choking on some food. He jumps up from the lower bunk with pleading eyes full of tears. Spastically, he mines the universal language of choking by pointing to his neck. I look at him very casually and slowly lower the book I was read with sloth-like haste. I take the right earbud out of my ear. I stared at him with indifference and slight curiosity until I realize that he wants me to save him. I'm confused because we had ab agreement that I was to let him die. I looked into his pleading eyes and slowly put my right earbud in, picked up my book, and began to read again. Shane smacks my bunk a few times and I look at him with a shrug of my shoulders.

I remember seeing his eyes the moment he realized I was going to let him die.

Shane is 6'4" and weighs about 280 lbs. He starts punching himself in the upper stomach with enough force to knock the breath out of another man, yet he's incapable of doing the same for himself. Shame lowers himself on the corner of the lower bunk and trashes around trying to dislodge the food and escape his potential death. I have no idea how Shane was able to save himself but, all of a sudden, he is standing up and taking deep, life-sustaining breaths.

I take my earbuds out because I know we are going to talk about what happened. Shane's first question surprises me: why didn't I help him? I say, "Because you wanted to die, remember?" What Shane says next is even more shocking, "I don't want to die by choking." I respond, "Shane, you can't have rules about how you want to die."

I must confess that it didn't cross my mind to help Shane. As far as I know, Shane is alive and well. I can tell you thing for sure, he never asked me to let him die again.

I am not a 100% caring and compassionate man that I was at 17, and yet I am not the same man suffering in the darkest depths when I was 30.

By giving this speech I am not using the Gavel Club or its members as a pseudo confessional booth to expunge my soul of its sins so I can sleep better at night. The Gavel Club allows me the opportunity to know myself and claim not only the good, but the bad and ugly as well.

Written for my speech group called Gavel Club. All of the stories are true.

I love you and am proud you are working on yourself.. 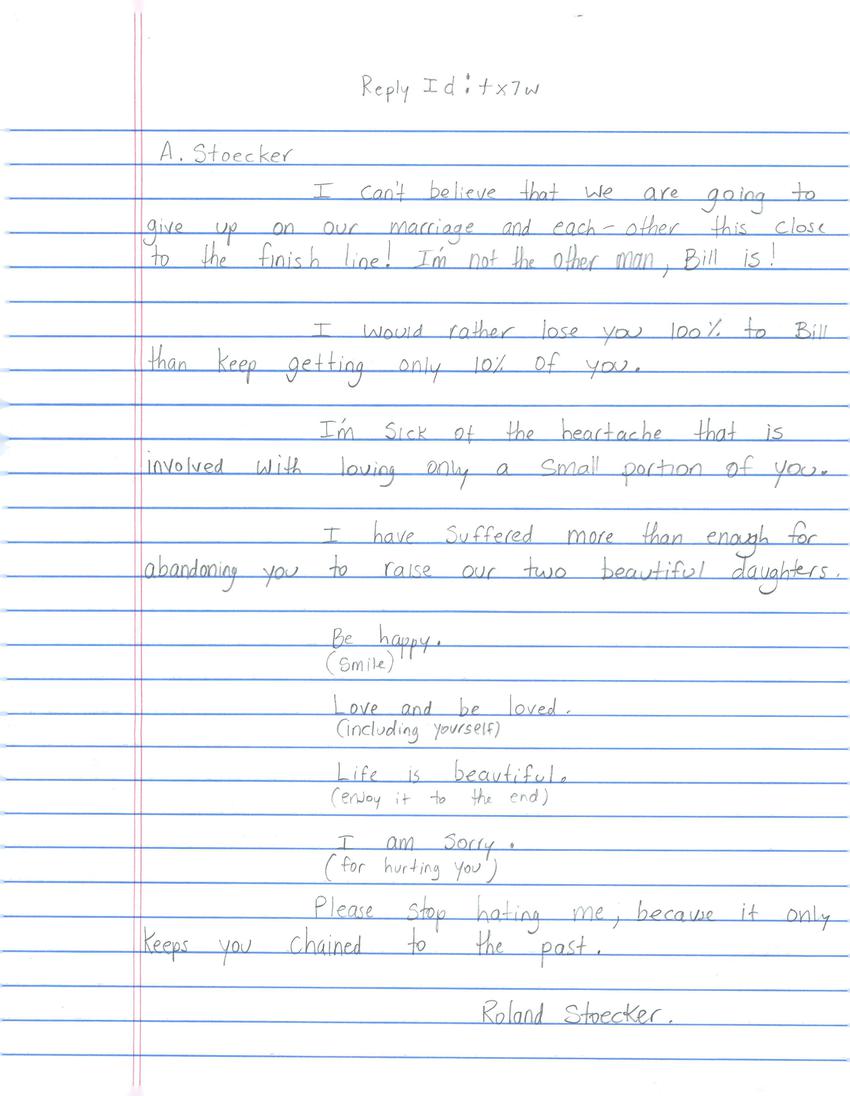 I am your wife and always will be we traveled a rough road apart but somehow have managed to forgive forget and find our way back together through the darkness. I enjoyed our time together recently and I am looking forward to many more until you are home again. See you soon my love.

I love you and we are all very proud of how far you’ve come and support you.

Love
Your family
I love you and miss you 💕