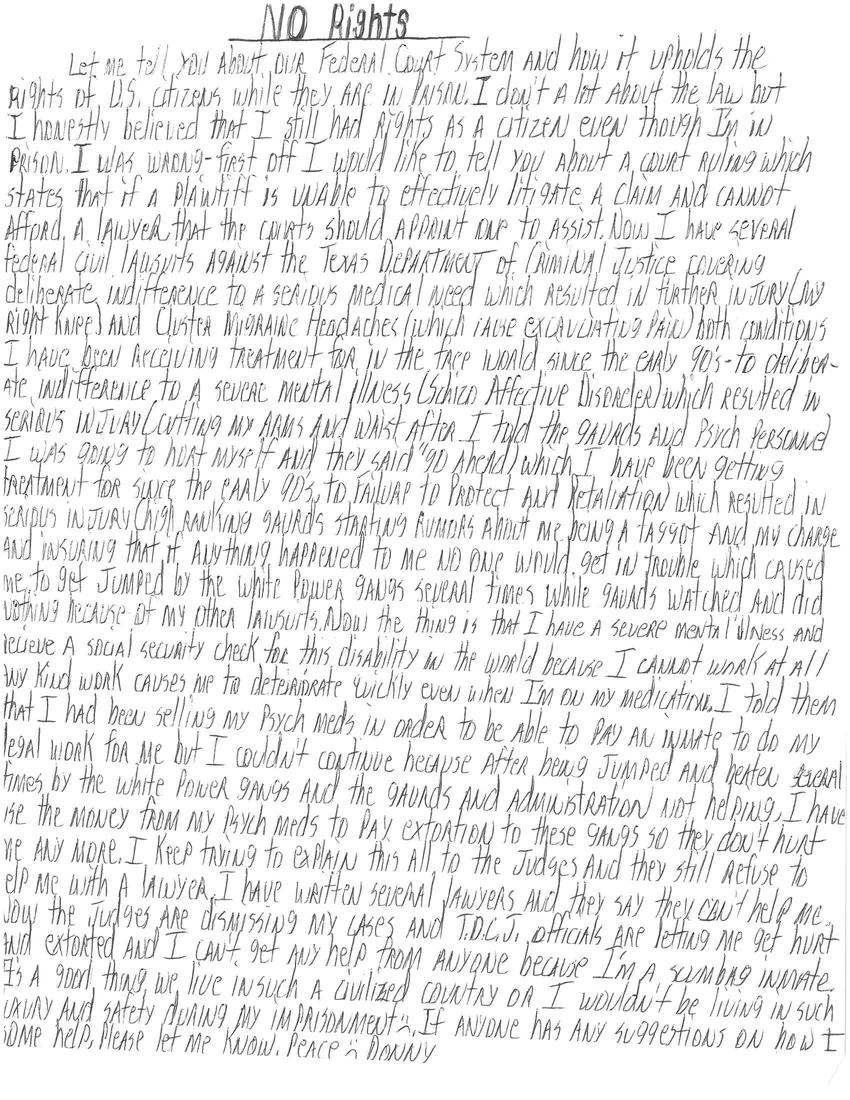 Let me tell you about our federal court system and how it upholds the rights of U.S. citizens while they are in prison.

I don't know a lot about the law, but I honestly believed that I still had rights as a citizen, even though I'm in prison. I was wrong. First off, I would like to tell you about a court ruling which states that if a plaintiff is unable to effectively litigate a claim and cannot afford a lawyer, that the courts should appoint one to assist.

Now, I have seen several federal civil lawsuits against the Texas Department of Criminal Justice covering deliberate indifference to a serious medical need which resulted in further injury (my right knee) and cluster migraine headaches (which caused excruciating pain). Both conditions I have been receiving treatment for in the free world since the early '90s. To deliberate indifference to a severe mental illness (schizo affective disorder) which resulted in serious injury (cutting my arms and waist after I told the guards and psych personnel I was going to hurt myself and they said, "Go ahead.") which I have been getting treatment for since the early '90s. To failure to protect and retaliation which resulted in serious injury (high-ranking guards starting rumors about me being a faggot and my charge and insuring that anything happened to me, no one would get in trouble, which caused me to get jumped by the white power gangs several times while guards watched and did nothing because of my other lawsuits).

Now the thing is that I have a severe mental illness and received a social security check for this disability in the world because I cannot work at all. Any kind of work causes me to deteriorate quickly, even when I'm on my medication. I told them that I had been selling my psych meds in order to be able to pay an inmate to do my legal work for me, but I couldn't continue because, after being jumped and beaten several times by the white power gangs and the guards and the administration not helping, I have to raise the money for my psych meds to pay extortion to these gangs so they don't hurt me anymore. I keep trying to explain this all to the judges, and they still refuse to help me with a lawyer.

I have written several lawsuits, and they say they can't help me. Now the judges are dismissing my cases and T.D.C.J. officers are letting me get hurt and extorted. I can't get any help from anyone because I'm a scumbag inmate.

It's a good thing we live in such a civilized country or I wouldn't be living in such luxury and safety during my imprisonment. :(

If anyone has any suggestions on how I can get some help, please let me know.

Please try and keep your chin up. Suffering from depression and anxiety myself, I know what it is like when you don't get your meds and things start caving in on you. I suffer from panic attacks when things are at their worst and it feels like I'm going insane (apparently a common symptom of panic attacks) and it's scary as hell so I sympathise there!

I understand why you were selling your meds but I really do not think that it is a good idea noting the tone of this letter! You are clearly having a bad time and missing your meds is NOT going to help things.

I am not going to pretend to know how to deal with gangs as I have no experience of prison myself so would not want to advise you as to how to deal with it, except to tell you to stay strong. I can't imagine how tough it must be for you, but you WILL get through it if you stay strong. Easier said then done I am sure but there will probably be people in there you can talk to (even if it is no-one official, but perhaps another inmate friend?)

Start taking your meds again and stay strong, Donny. The mind is a powerful tool in getting through the toughest of situations, if you use it to your advantage! Get those meds and start making use of the most powerful tool in your tool box to cope.

In the famous words of many a person, "Don't let the bastards grind you down". 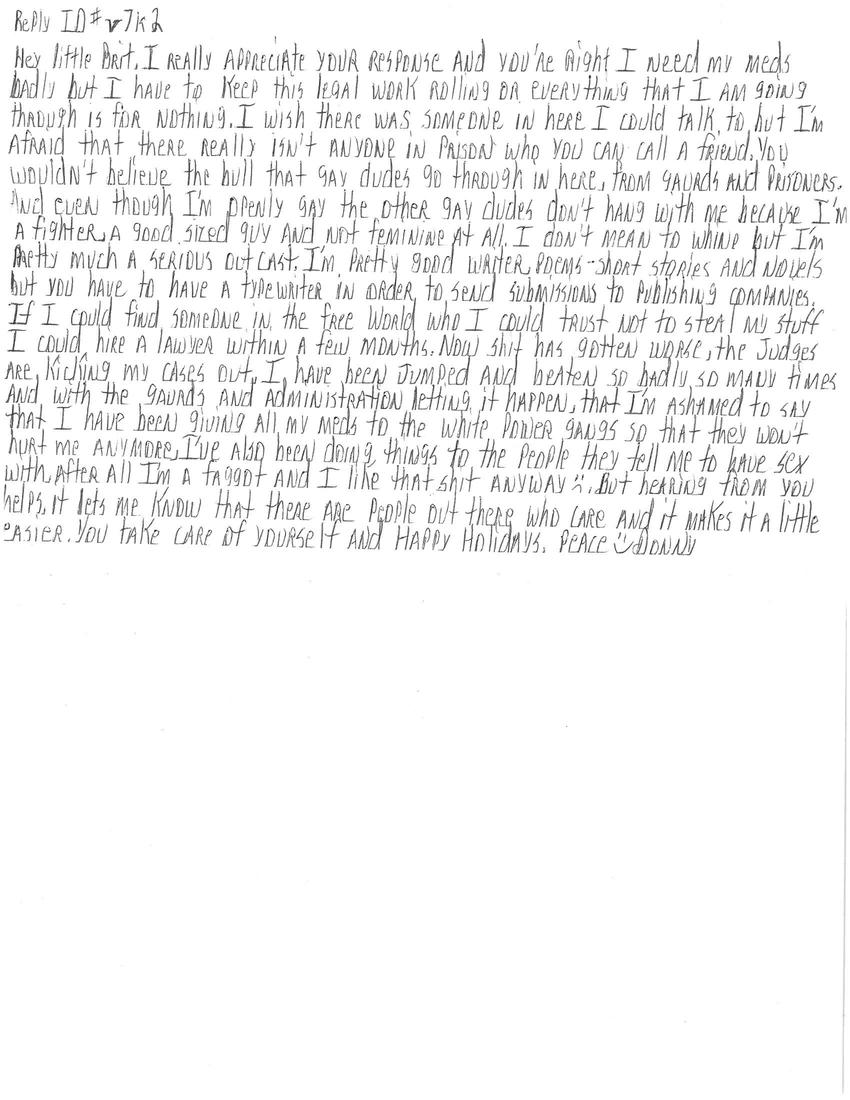