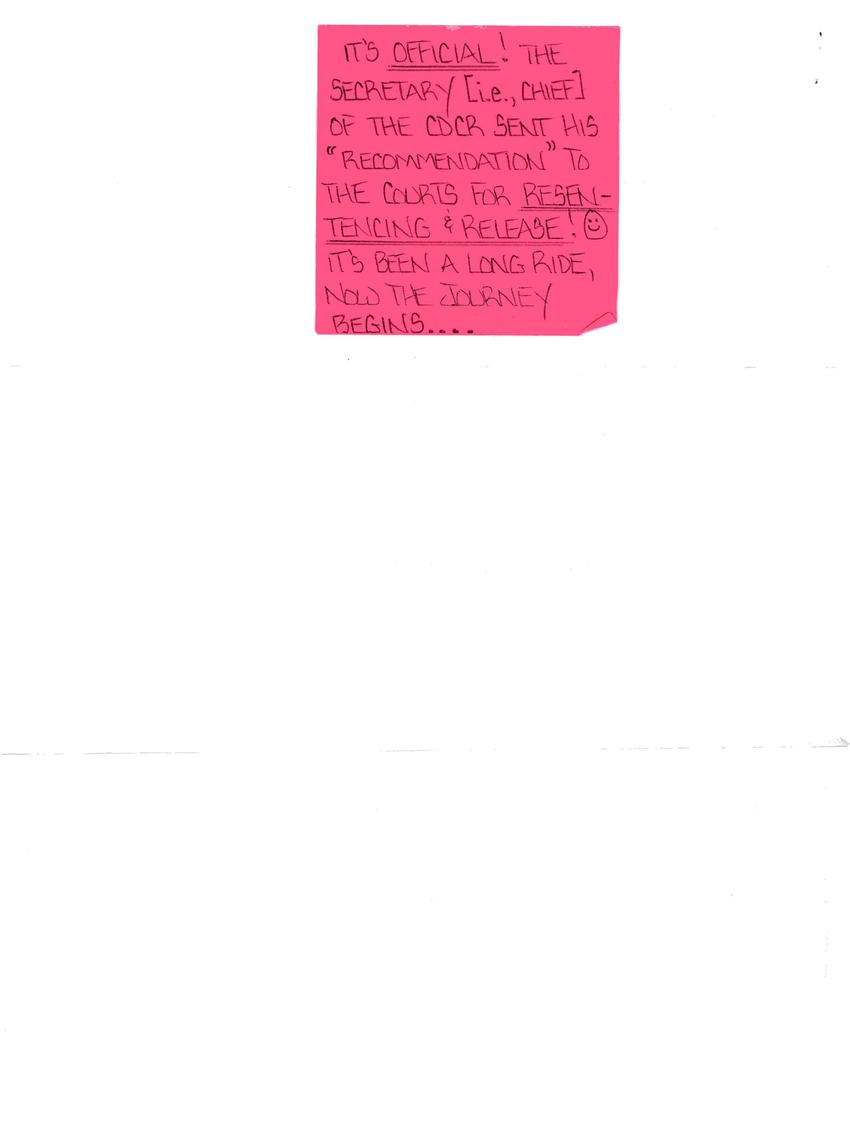 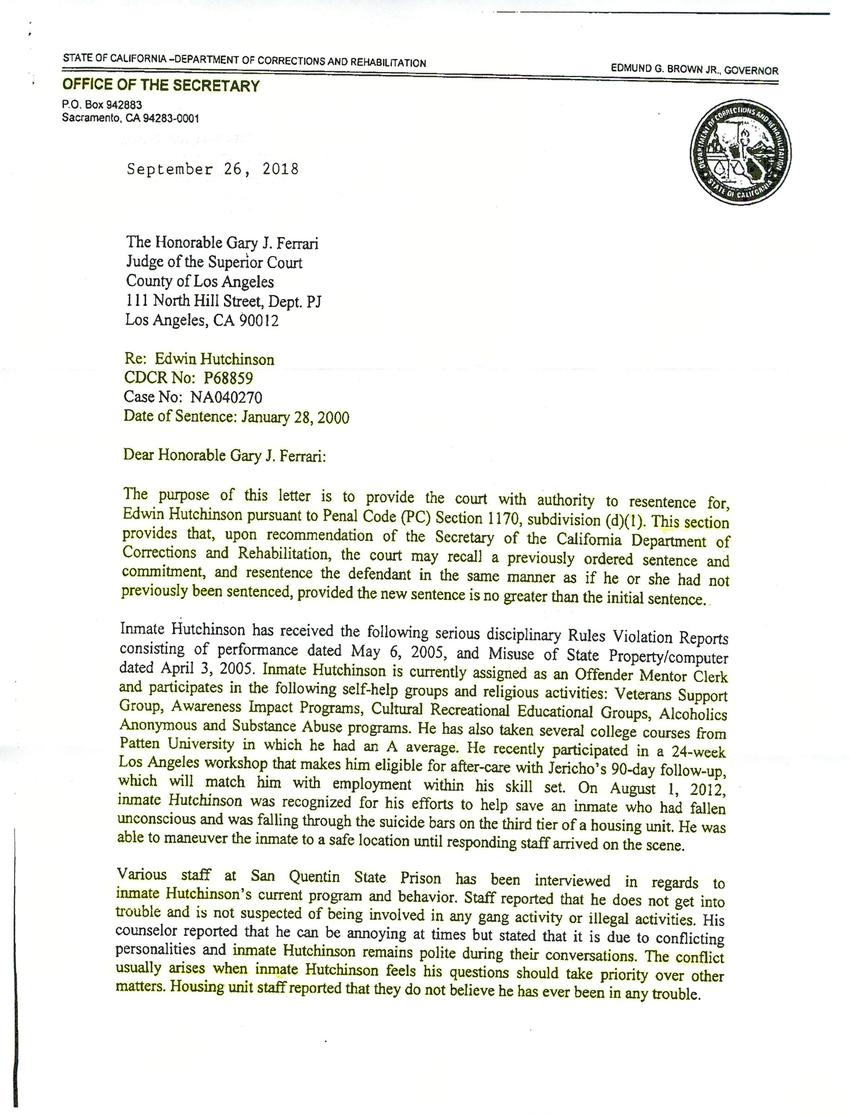 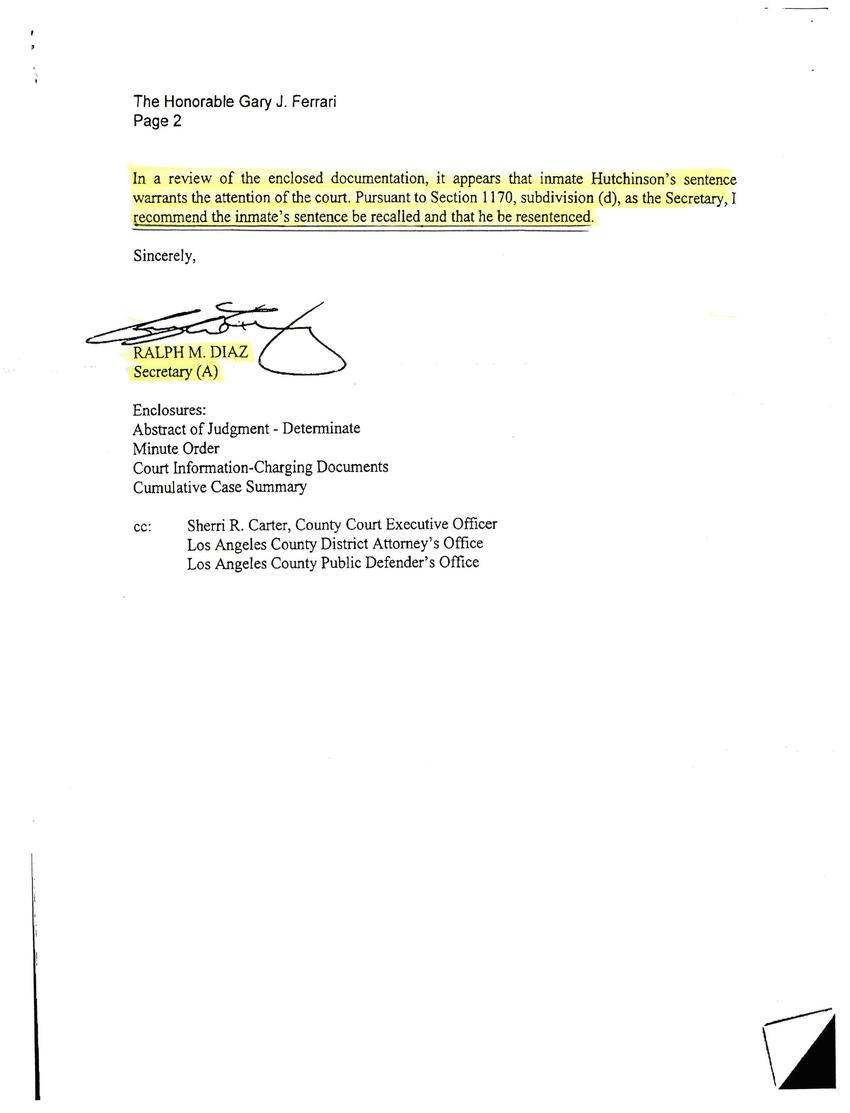 It's official! The secretary (i.e. chief) of CDCR sent his recommendation to the courts for resentencing and release! :) It's been a long ride. Now the journey begins...

The purpose of this letter is to provide the court with authority to resentence for Edwin Hutchinson pursuant to Penal Code (PC) Section 1170, subdivision (d)(1). This section provides that, upon recommendation of the Secretary of California Department of Corrections and Rehabilitation, the court may recall a previously ordered sentence and commitment, and resentence the defendant in the same manner as if he or she had not previously been sentenced, provided the new sentence is no greater than the initial sentence.

Inmate Hutchinson has received the following serious disciplinary Rules Violation Reports consisting of performance dated May 6, 2005, and Misuse of State Property/computer dated April 3, 2005. Inmate Hutchinson is currently assigned as an Offender Mentor Clerk and participates in the following self-help groups and religious activities: Veterans Support Group, Awareness Impact Programs, Cultural Recreational Educational Groups, Alcoholics Anonymous and Substance Abuse programs. He has also taken several college courses from Patten University in which he had an A average. He recently participated in a 24-week Los Angeles workshop that makes him eligible for after-care with Jericho's 90-day follow-up, which will match him with employment within his skill set. On August 1, 2012, inmate Hutchinson was recognized for his efforts to help save an inmate who had fallen unconscious and was falling through the suicide bars on the third tier of a housing unit. He was able to maneuver the inmate to a safe location until responding staff arrived on the scene.

Various staff at San Quentin State Prison has been interviewed in regards to inmate Hutchinson's current program and behavior. Staff reported that he does not get into trouble and is not suspected of being involved in any gang activity or illegal activities. His counselor reported that he can be annoying at times, but stated that it is due to conflicting personalities. Inmate Hutchinson remains polite during their conversations. The conflict usually arises when inmate Hutchinson feels his questions should take priority over other matters. Housing unit staff reported that they do not believe he has ever been in trouble.

In review of the enclosed documentation, it appears that inmate Hutchinson's sentence warrants the attention of the court. Pursuant to Section 1170, subdivision (d), as the Secretary, I recommend the inmate's sentence be recalled and that he be resentenced.

That's great news! Here's hoping that everything pans out. I'm hoping that this resentencing is fair for you.