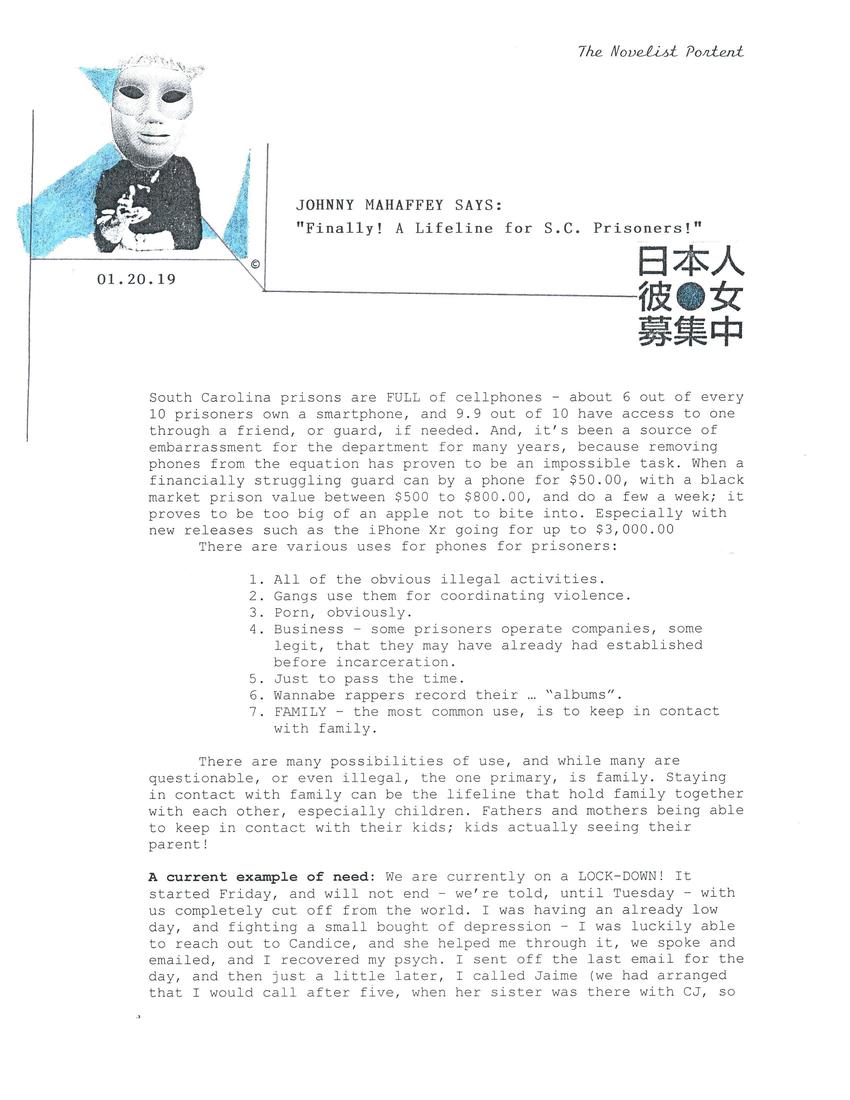 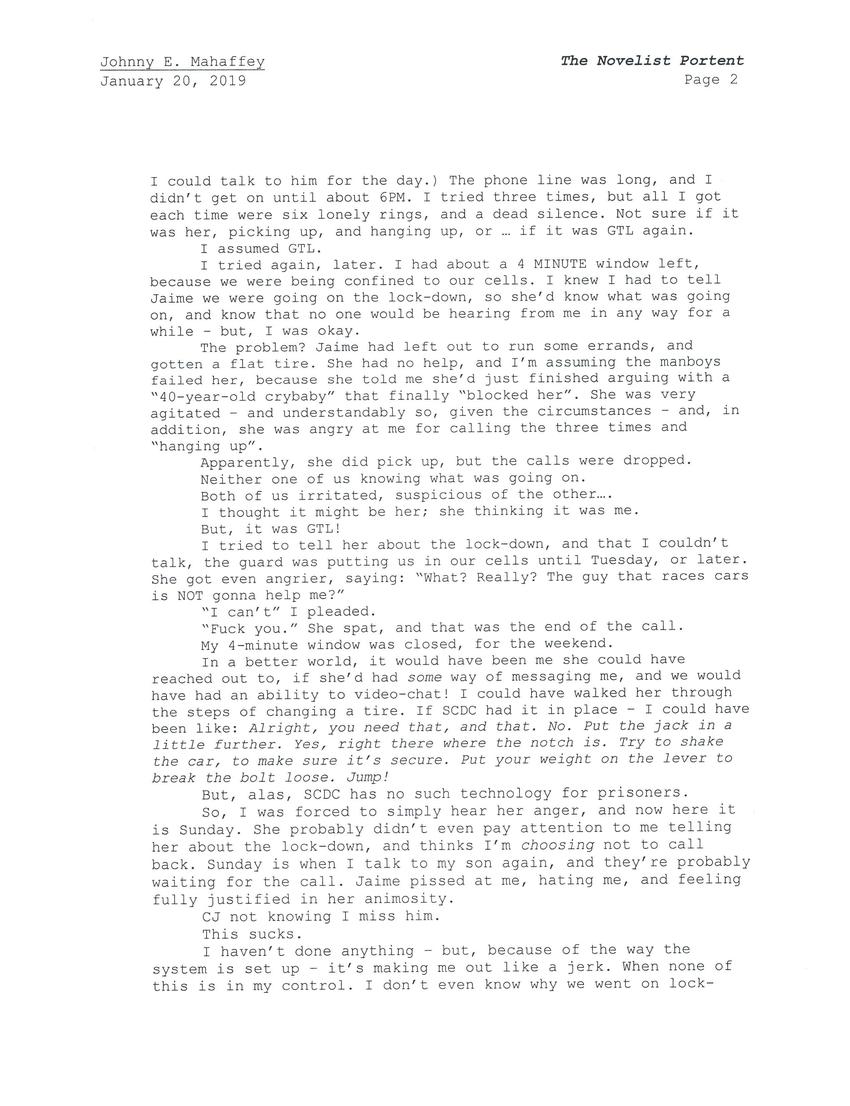 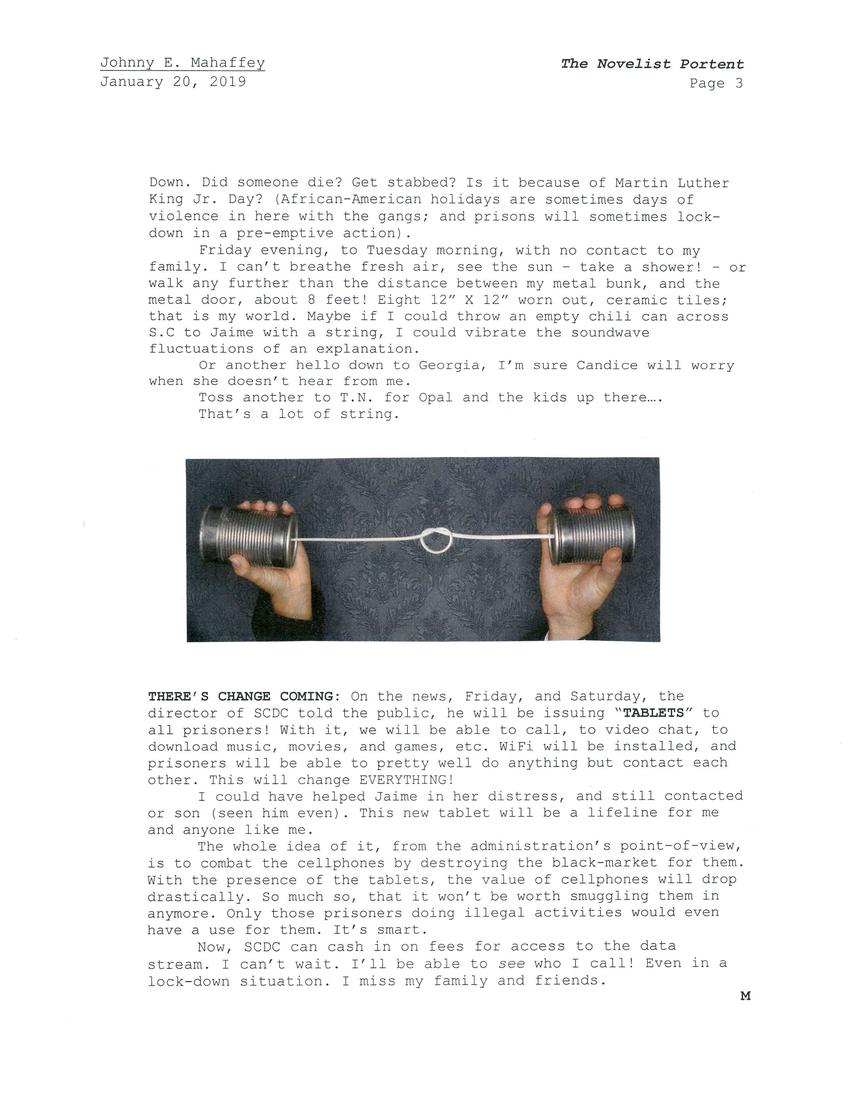 South Carolina prisons are FULL of cellphones - about 6 out of every 10 prisoners own a smartphone, and 9.9 out of 10 have access to one through a friend, or guard, if needed. And, it's been a source of embarrassment for the department for many years, because removing phones from the equation has proven to be an impossible task. When a financially struggling guard can by a phone for $50.00, with a black market prison value between $500 to $800.00, and do a few a week; it proves to be too big of an apple not to bite into. Especially with new releases such as the iPhone Xr going for up to $3,000.00

There are various uses for phones for prisoners:

There are many possibilities of use, and while many are questionable, or even illegal, the one primary, is family. Staying in contact with family can be the lifeline that hold family together with each other, especially children. Fathers and mothers being able to keep in contact with their kids; kids actually seeing their parent!

A current example of need: We are currently on a LOCK-DOWN! It started Friday, and will not end - we're told, until Tuesday - with us completely cut off from the world. I was having an already low day, and fighting a small bought of depression - I was luckily able to reach out to Candice, and she helped me through it, we spoke and emailed, and I recovered my psych. I sent off the last email for the day, and then just a little later, I called Jaime (we had arranged that I would call after five, when her sister was there with CJ, so I could talk to him for the day.) The phone line was long, and I didn't get on until about 6PM. I tried three times, but all I got each time were six lonely rings, and a dead silence. Not sure if it was here, picking up, and hanging up, or ... if it was GTL again.

I tried again, later. I had about a 4 MINUTE window left, because we were being confined to our cells. I knew I had to tell Jaime we were going on the lock-down, so she'd know what was going on, and know that no one would be hearing from me in any way for a while - but, I was okay.

The problem? Jaime had left out to run some errands, and gotten a flat tire. She had no help, and I'm assuming the manboys failed her, because she told me she'd just finished arguing with a "40-year-old crybaby" that finally "blocked her". She was very agitated - and understandably so, given the circumstances - and, in addition, she was angry at me for calling the three times and "hanging up".

Apparently, she did pick up, but the calls were dropped.

Neither one of us knowing what was going on.

Both of us irritated, suspicious of the other...

I thought it might be her; she thinking it was me.

I tried to tell her about the lock-down, and that I couldn't talk, the guard was putting us in our cells until Tuesday, or later. She got even angrier, saying: "What? Really? The guy that races cars is NOT gonna help me?"

"Fuck you." She spat, and that was the end of the call.

My 4-minute window was closed, for the weekend.

In a better world, it would have been me she could have reached out to, if she'd had SOME way of messaging me, and we could have had an ability to video-chat! I could have walked her through the steps of changing a tire. If SCDC had it in place - I could have been like: Alright, you need that, and that. No. Put the jack in a little further. Yes, right there where the notch is. Try to shake the car, to make sure it's secure. Put your weight on the lever to break the bolt loose. Jump!

But, alas, SCDC has no such technology for prisoners.

So, I was forced to simply hear her anger, and now here it is Sunday. She probably didn't even pay attention to me telling her about the lock-down, and thinks I'm CHOOSING not to call back. Sunday is when I talk to my son again, and they're probably waiting for the call. Jaime pissed at me, hating me, and feeling fully justified in her animosity.

CJ not knowing I miss him.

I haven't done anything - but, because of the way the system is set up - it's making me out like a jerk. When none of this is in my control. I don't even know why we went on lock-Down. Did someone die? Get stabbed? Is it because of Martin Luther King Jr. Day? (African-American holidays are sometimes days of violence in here with the gangs; and prisons will sometimes lock-down in a pre-emptive action.

Friday evening, to Tuesday morning, with no contact to my family. I can't breathe fresh air, see the sun - take a shower! - or walk any further than the distance between my metal bunk, and the metal door, about 8 feet! Eight 12" x 12" worn out, ceramic tiles; that is my world. Maybe if I could throw an empty chili can across S.C. to Jaime with a string, I could vibrate the soundwave fluctuations of an explanation.

Or another hello down to Georgia, I'm sure Candice will worry when she doesn't hear from me.

Toss another to T.N. for Opal and the kids up there...

That's a lot of string.

THERE'S CHANGE COMING: On the news, Friday, and Saturday, the director of SCDC told the public, he will be issuing "TABLETS" to all prisoners! With it, we will be able to call, to video chat, to download music, movies, and games, etc. WiFi will be installed, and prisoners will be able to pretty well do anything but contact each other. This will change EVERYTHING!

I could have helped Jaime in her distress, and still contacted or son (seen him even). This new tablet will be a lifeline for me and anyone like me.

The whole idea of it, from the administration's point-of-view, is to combat the cellphones by destroying the black-market for them. With the presence of the tablets, the value of cellphones will drop drastically. So much so, that it won't be worth smuggling them in anymore. Only those prisoners doing illegal activities would even have a use for them. It's smart.

Now, SCDC can cash in on fees for access to the data stream. I can't wait. I'll be able to SEE who I call! Even in a lock-down situation. I miss my family and friends.

The kanji you used for the top of this post (日本人彼女募集中) says "Seeking a Japanese girlfriend," which I'm not sure if you are or not. Just a friendly reminder that the Asian-looking gibberish actually means something. Ciao!
What happened to not airing our business on here? Everything I say is off the damn record. Remember?
Johnny knows his kanji, we correspond in Japanese. He put that there on purpose to see if anyone caught on to it. It's from a t-shirt Johnny designed years ago that is still worn by some today. Sort of a joke. Single guys would wear them. He is single afterall ... But i know that right now his heart is in turmoil. He has been set aside by one he trusted. He won't talk to me anymore ... I am in Osaka, his type for sure, but his heart and soul belong to another right now. Maybe a good girl will come along one day and realize he is worth saving. The biggest improvement that i have seen in him was when Candice returned into his life, i have never seen him with so much self esteem. She has been a good presence in his life.