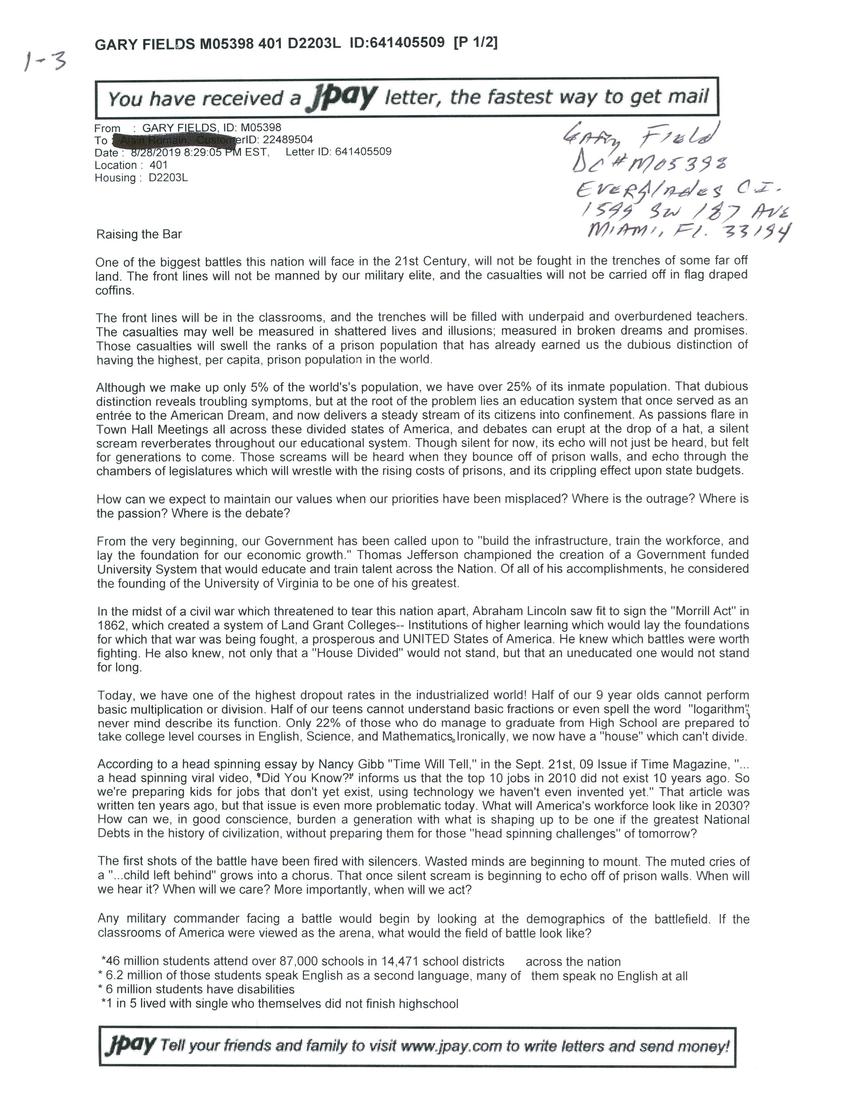 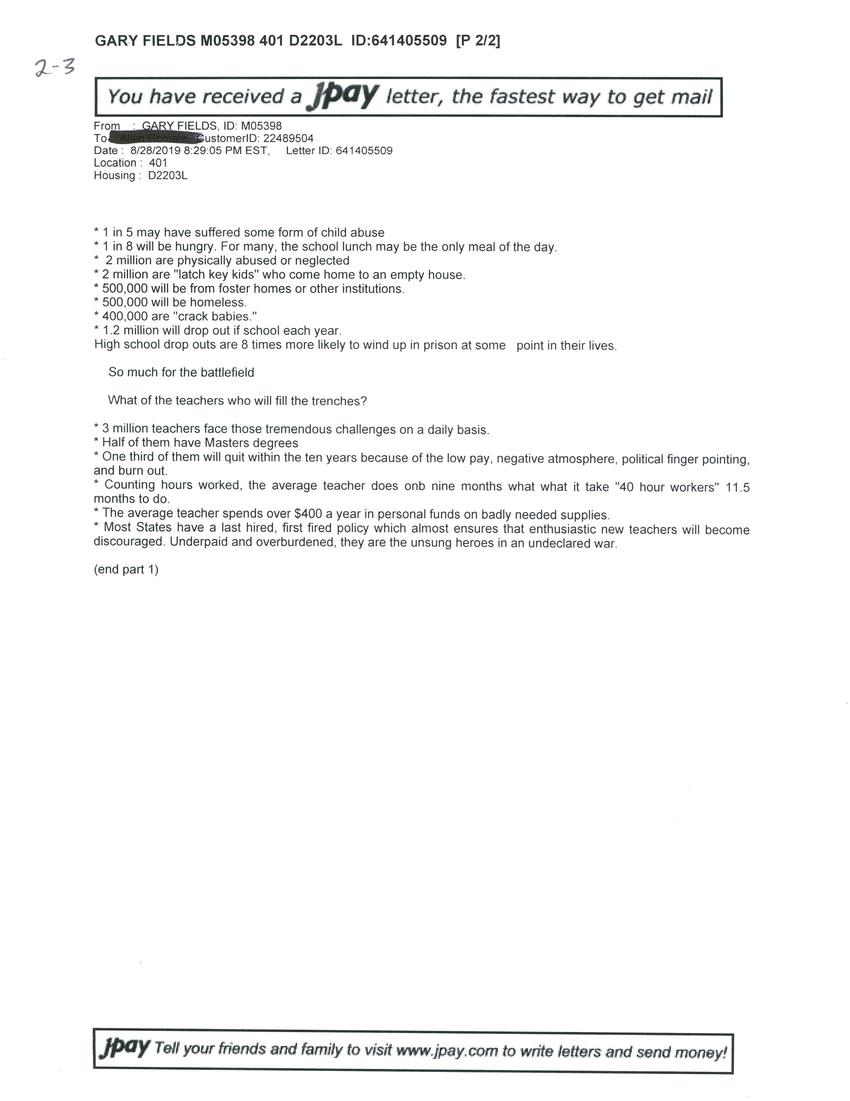 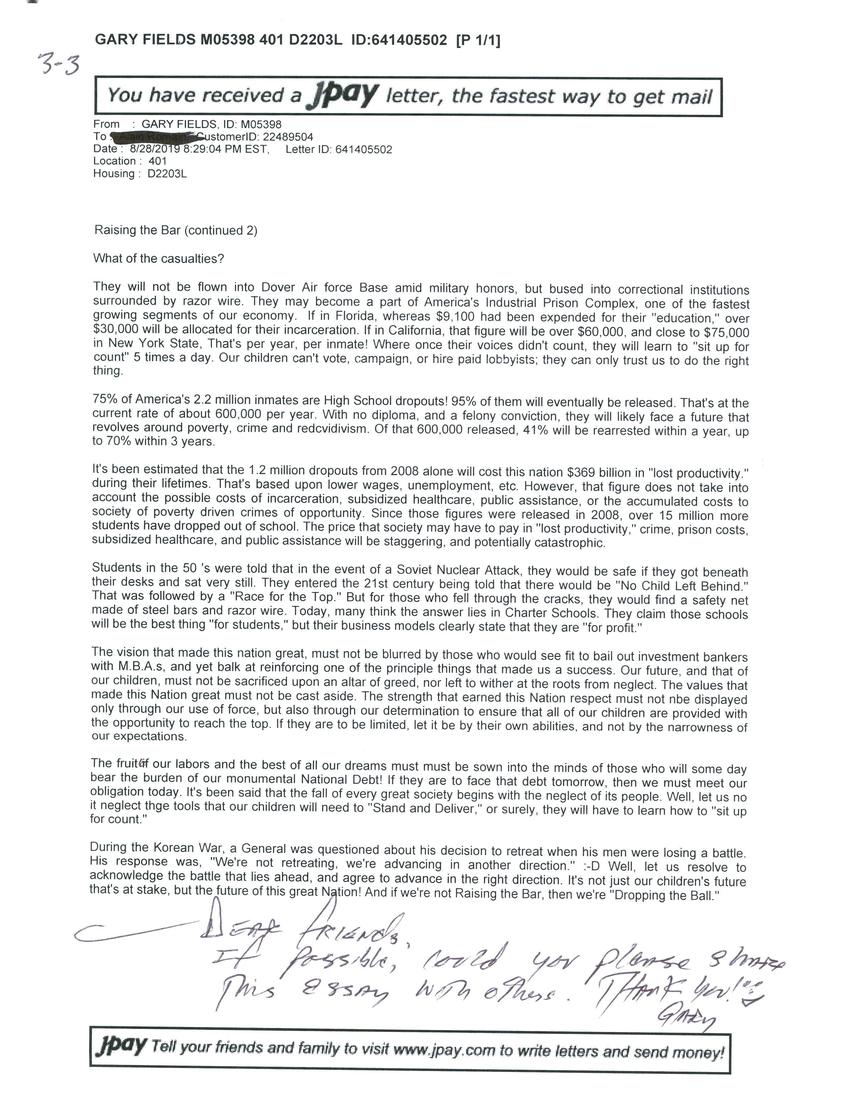 You have received a Jpay letter, the fastest way to get mail

One of the biggest battles this nation will face in the 21st Century, will not be fought in the trenches of some far off land. The front lines will not be manned by our military elite, and the casualties will not be carried off in flag draped coffins.

The front lines will be in the classrooms, and the trenches will be filled with underpaid and overburdened teachers. The casualties may well be measured in shattered lives and illusions, measured in broken dreams and promises, Those casualties will swell the ranks of a prison population that has already earned us the dubious distinction of having the highest per capita, prison population in the world.

Although we make up only 5% of the world's's population, we have over 25% of its inmate population. That dubious distinction reveals troubling symptoms, but at the root of the problem lies an education system that once served as an entrée to the American Dream, and now delivers a steady stream of its citizens into confinement. As passions flare in Town Hall Meetings all across these divided states of America, and debates can erupt at the drop of a hat, a silent scream reverberates throughout our educational system. Though silent for now, its echo will not just be heard, but felt for generations to come. Those screams will be heard when they bounce off of prison walls, and echo through the chambers of legislatures which will wrestle with the rising costs of prisons, and its crippling effect upon state budgets.

From the very beginning, our Government has been called upon to "build the infrastructure, train the workforce, and lay the foundation for our economic growth." Thomas Jefferson championed the creation of a Government funded University System that would educate and train talent across the Nation. Of all of his accomplishments, he considered the founding of the University of Virginia to be one of his greatest.

In the midst of a civil war which threatened to tear this nation apart, Abraham Lincoln saw fit to sign the "Morrill Act" in 1862 which created a system of Land Grant Colleges - Institutions of higher learning which would lay the founda for which that war was being fought, a prosperous and UNITED States of America. He knew which battles were worth fighting. He also knew, not only that a "House Divided" would not stand, but that an uneducated one would not stand for long.

Today, we have one of the highest dropout rates in the industrialized world! Half of our 9 year olds cannot perform basic multiplication or division. Half of our teens cannot understand basic fractions or even spell the word "logarithm never mind describe its function. Only 22% of those who do manage to graduate from High School are prepared to take college level courses in English, Science, and Mathematics, Ironically, we now have a "house" which can't divide.

According to a head spinning essay by Nancy Gibb "Time Will Tell," in the Sept. 21st, 09 Issue if Time Magazine, "... a head spinning viral video, "Did You Know?' informs us that the top 10 jobs in 2010 did not exist 10 years ago. So we're preparing kids for jobs that don't yet exist, using technology we haven't even invented yet." That article was written ten years ago, but that issue is even more problematic today. What will America's workforce look like in 2030? How can we, in good conscience, burden a generation with what is shaping up to be one if the greatest National Debts in the history of civilization, without preparing them for those "head spinning challenges" of tomorrow?

The first shots of the battle have been fired with silencers. Wasted minds ar ning to mount. The muted cries of a "...child left behind" grows into a chorus. That once silent scream is beginning to echo off of prison walls. When will we hear it? When will we care? More importantly, when will we act?

Any military commander facing a battle would begin by looking at the demographics of the battlefield. If the classrooms of America were viewed as the arena, what would the field of battle look like?

*46 million students attend over 87,000 schools in 14,471 school districts across the nation
*6.2 million of those students speak English as a second language, many of them speak no English at all
*6 million students have disabilities
*1 in 5 lived with single who themselves did not finish highschool

Jpay Tell your friends and family to visit www.jpay.com to write letters and send money!

So much for the battlefield

What of the teachers who will fill the trenches?

*3 million teachers face those tremendous challenges on a daily basis.
*Half of them have Masters degrees
* One third of them will quit within the ten years because of the low pay, negative atmosphere, political finger pointing. and burn out.
* Counting hours worked, the average teacher does onb nine months what what it take "40 hour workers" 11.5 months to do.
*The average teacher spends over $400 a year in personal funds on badly needed supplies.
*Most States have a last hired, first fired policy which almost ensures that enthusiastic new teachers will become discouraged. Underpaid and overburdened, they are the unsung heroes in an undeclared war.

What of the casualties?

They will not be flown into Dover Air force Base amid military honors, but bused into correctional institutions surrounded by razor wire. They may become a part of America's Industrial Prison Complex, one of the fastest growing segments of our economy. If in Florida, whereas $9.100 had been expended for their "education," over $30,000 will be allocated for their incarceration. If in California, that figure will be over $60.000, and close to $75,000 in New York State. That's per year, per inmate! Where once their voices didn't count, they will learn to "sit up for count" 5 times a day. Our children can't vote, campaign, or hire paid lobbyists; they can only trust us to do the right thing.

75% of America's 2.2 million inmates are High School dropouts! 95% of them will eventually be released. That's at the current rate of about 600,000 per year. With no diploma, and a felony conviction, they will likely face a future that revolves around poverty, crime and redcvidivism. Of that 600.000 released, 41% will be rearrested within a year, up to 70% within 3 years.

It's been estimated that the 1.2 million dropouts from 2008 alone will cost this nation $369 billion in "lost productivity." during their lifetimes. That's based upon lower wages, unemployment, etc. However, that figure does not take into account the possible costs of incarceration, subsidized healthcare, public assistance, or the accumulated costs to society of poverty driven crimes of opportunity. Since those figures were released in 2008, over 15 million more students have dropped out of school. The price that society may have to pay in "lost productivity." crime, prison costs. subsidized healthcare, and public assistance will be staggering, and potentially catastrophic.

Students in the 50 's were told that in the event of a Soviet Nuclear Attack, they would be safe if they got beneath their desks and sat very still. They entered the 21st century being told that there would be "No Child Left Behind." That was followed by a "Race for the Top." But for those who fell through the cracks, they would find a safety net made of steel bars and razor wire. Today, many think the answer lies in Charter Schools. They claim those schools will be the best thing "for students," but their business models clearly state that they are "for profit."

The vision that made this nation great, must not be blurred by those who would see fit to bail out investment bankers with M.B.A.s, and yet balk at reinforcing one of the principle things that made us a success. Our future, and that of our children, must not be sacrificed upon an altar of greed, nor left to wither at the roots from neglect. The values that made this Nation great must not be cast aside. The strength that earned this Nation respect must not be displayed only through our use of force, but also through our determination to ensure that all of our children are provided with the opportunity to reach the top. If they are to be limited, let it be by their own abilities, and not by the narrowness of our expectations.

The fruit Gf our labors and the best of all our dreams must must be sown into the minds of those who will some day bear the burden of our monumental National Debt! If they are to face that debt tomorrow, then we must meet our obligation today. It's been said that the fall of every great society begins with the neglect of its people. Well, let us no it neglect thge tools that our children will need to "Stand and Deliver." or surely, they will have to learn how to "sit up for count."

During the Korean War, a General was questioned about his decision to retreat when his men were losing a battle, His response was, "We're not retreating, we're advancing in another direction." :-D Well, let us resolve to acknowledge the battle that lies ahead, and agree to advance in the right direction. It's not just our children's future that's at stake, but the future of this great Nation! And if we're not Raising the Bar, then we're "Dropping the Ball."

Dear friends,
If possible, could you please share this essay with others. Thank you! :)
Gary

Jpay Tell your friends and family to visit www.jpay.com to write letters and send money!