The Meaning of Life: The Case for Abolishing Life Sentences 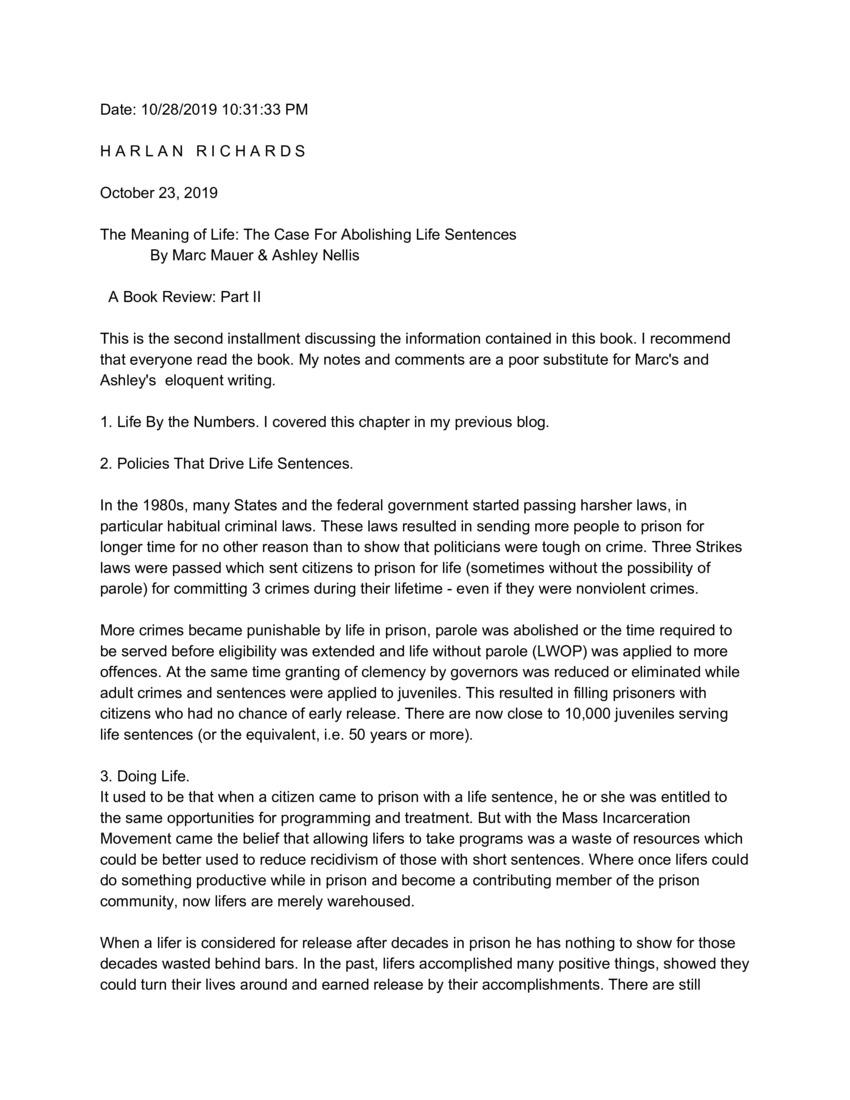 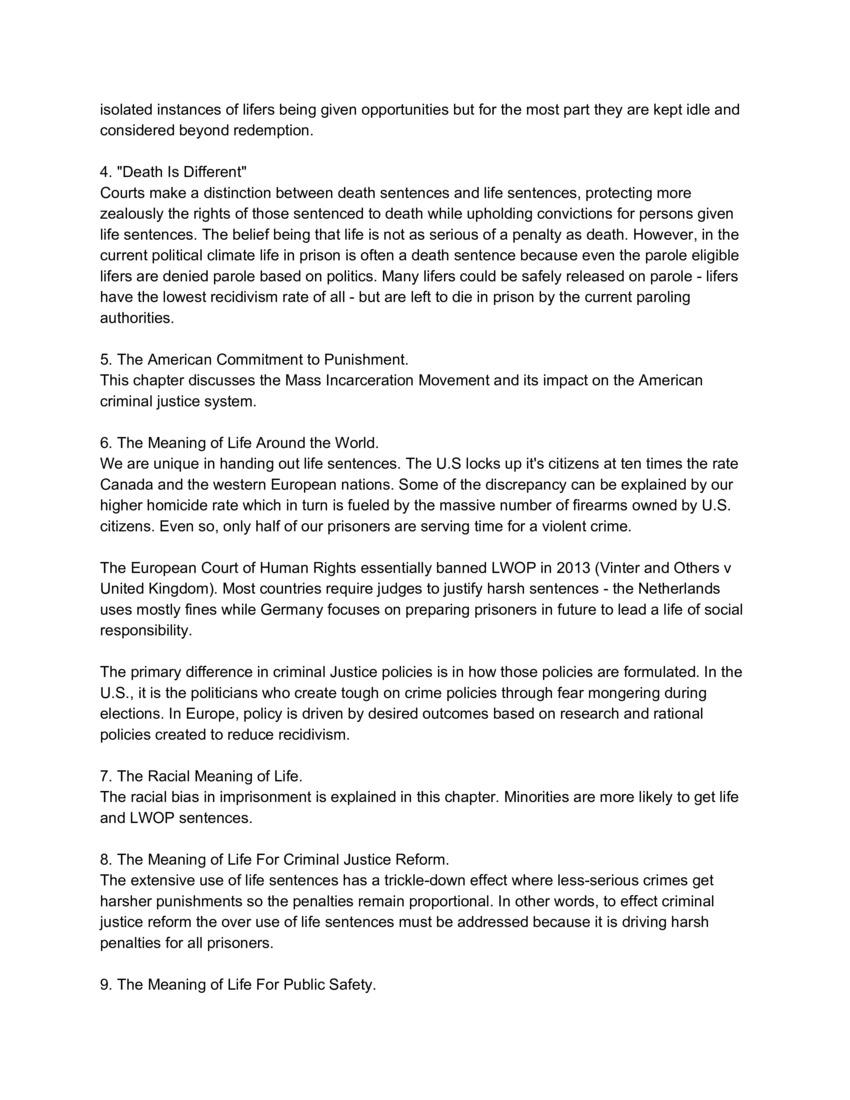 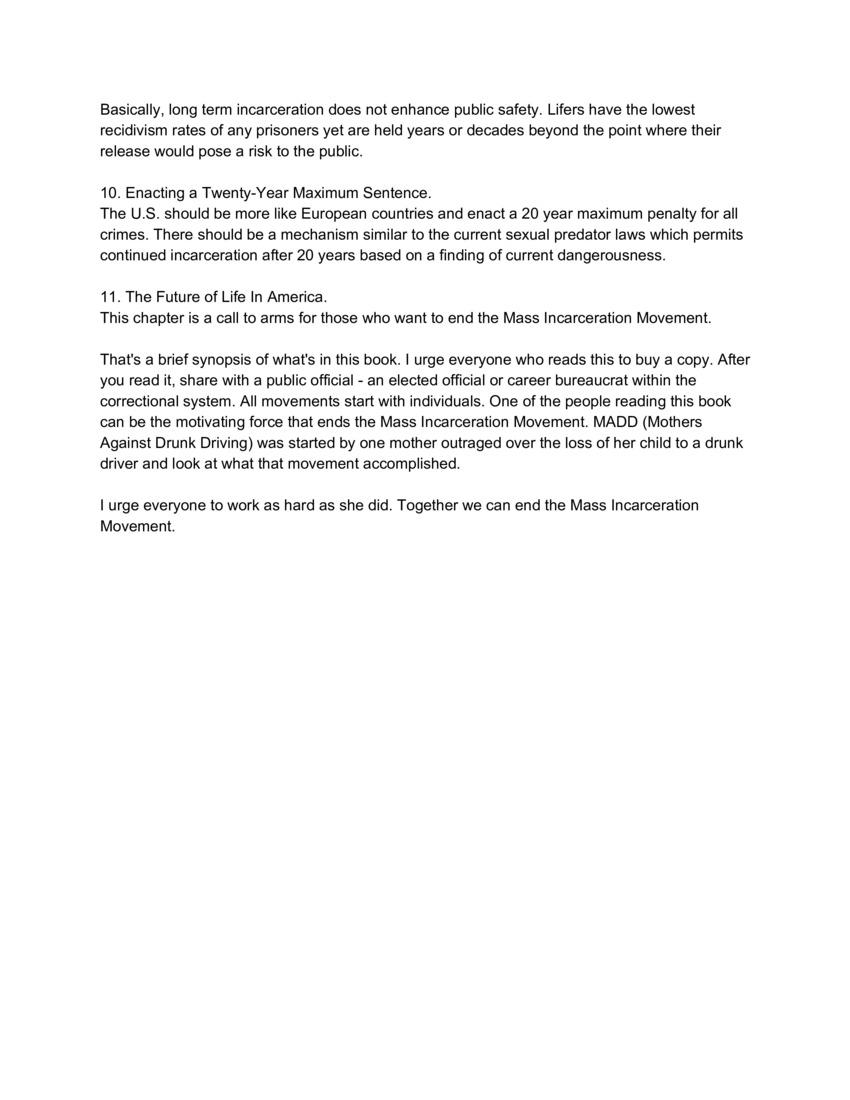 The Meaning of Life: The Case For Abolishing Life Sentences
By Marc Mauer & Ashley Nellis

This is the second installment discussing the information contained in this book. I recommend that everyone read the book. My notes and comments are a poor substitute for Marc's and Ashley's eloquent writing.

1. Life By the Numbers. I covered this chapter in my previous blog.

In the 1980s, many States and the federal government started passing harsher laws, in in particular habitual criminal laws. These laws resulted in sending more people to prison for longer time for no other reason than to show that politicians were tough on crime. Three Strikes laws were passed which sent citizens to prison for life (sometimes without the possibility of parole) for committing 3 crimes during their lifetime - even if they were nonviolent crimes.

More crimes became punishable by life in prison, parole was abolished or the time required to be served before eligibility was extended and life without parole (LWOP) was applied to more offences. At the same time granting of clemency by governors was reduced or eliminated while adult crimes and sentences were applied to juveniles. This resulted in prisoners with citizens who had no chance of early release. There are now close to 10,000 juveniles serving life sentences (or the equivalent, i.e. 50 years or more).

3. Doing Life.
It used to be when a citizen came to prison with a life sentence, he or she was entitled to the same opportunities for programming and treatment. But with the Mass Incarceration Movement came the belief that allowing lifers to take programs was a waste of resources which could be better used to reduce recidivism of those with short sentences. Where once lifers could do something productive while in prison and become a contributing member of the prison community, now lifers are merely warehoused.

When a lifer is considered for release after decades in prison he has nothing to show for those decades wasted behind bars. In the past, lifers accomplished many positive things, showed they could turn their lives around and earned release by their accomplishments. There are still isolated instances of lifers being given opportunities but for the most part they are kept idle and considered beyond redemption.

4. "Death Is Different"
Courts make a distinction between death sentences and life sentences, protecting more zealously the rights of those sentenced to death while upholding convictions for persons given life sentences. The belief being that life in prison is often a death sentence because even the parole eligible lifers are denied parole based on politics. Many lifers could be safely released on parole - lifers have the lowest recidivism rate of all - but are left to die in prison by the current paroling authorities.

5. The American Commitment to Punishment.
This chapter discusses the Mass Incarceration Movement and its impact on the American criminal justice system.

6. The Meaning of Life Around the World.
We are unique in handing out life sentences. The U.S. locks up its citizens at ten times the rate Canada and the western European nations. Some of the discrepancy can be explained by our higher homicide rate which in turn is fueled by the massive number of firearms owned by U.S. citizens. Even so, only half of our prisoners are serving time for a violent crime.

The European Court of Human Rights essentially banned LWOP in 2013 (Vinter and Others v United Kingdom). Most countries require judges to justify harsh sentences - the Netherlands uses mostly fines while Germany focuses on preparing pensioners in future to lead a life of social responsibility.

The primary difference in criminal Justice policies is in how those policies are formulated. In the U.S., it is the politicians who create tough on crime policies through fear mongering during elections. In Europe, policy is driven by desired outcomes based on research and rational policies created to reduce recidivism.

7. The Racial Meaning of Life.
The racial bias in imprisonment is explained in this chapter. Minorities are more likely to get life and LWOP sentences.

8. The Meaning of Life For Criminal Justice Reform.
The extensive use of life sentences has a trickle-down effect where less-serious crimes get harsher punishments so the penalties remain proportional. In other words, to effect criminal justice reform the over use of life sentences must be addressed because it is driving harsh penalties for all prisoners/

9. The Meaning of Life For Public Safety.
Basically, long term incarceration does not enhance public safety. Lifers have the lowest recidivism rates of any prisoners yet are held years or decades beyond the point where their release would pose a risk to the public.

10. Enacting a Twenty-Year Maximum Sentence.
The U.S. should be more like European countries and enact a 20 year maximum penalty for all crimes. There should be a mechanism similar to the current sexual predator laws which permits continued incarceration after 20 years based on a finding or current dangerousness.

11. The Future of Life In America.
This chapter is a call to arms for those who want to end the Mass Incarceration Movement.

That's a brief synopsis of what's in this book. I urge everyone who reads this to buy a copy. After you read it, share with a public official - an elected official or career bureaucrat within the correctional system. All movements start with individuals. One of the people reading this book can be the motivating force that ends the Mass Incarceration Movement. MADD (Mothers Against Drunk Driving) was started by one mother outraged over the loss of her child to a drunk driver and look at what that movement accomplished.

I urge everyone to work as hard as she did. Together we can end the Mass Incarceration Movement.