The Hidden Cost of Incarceration 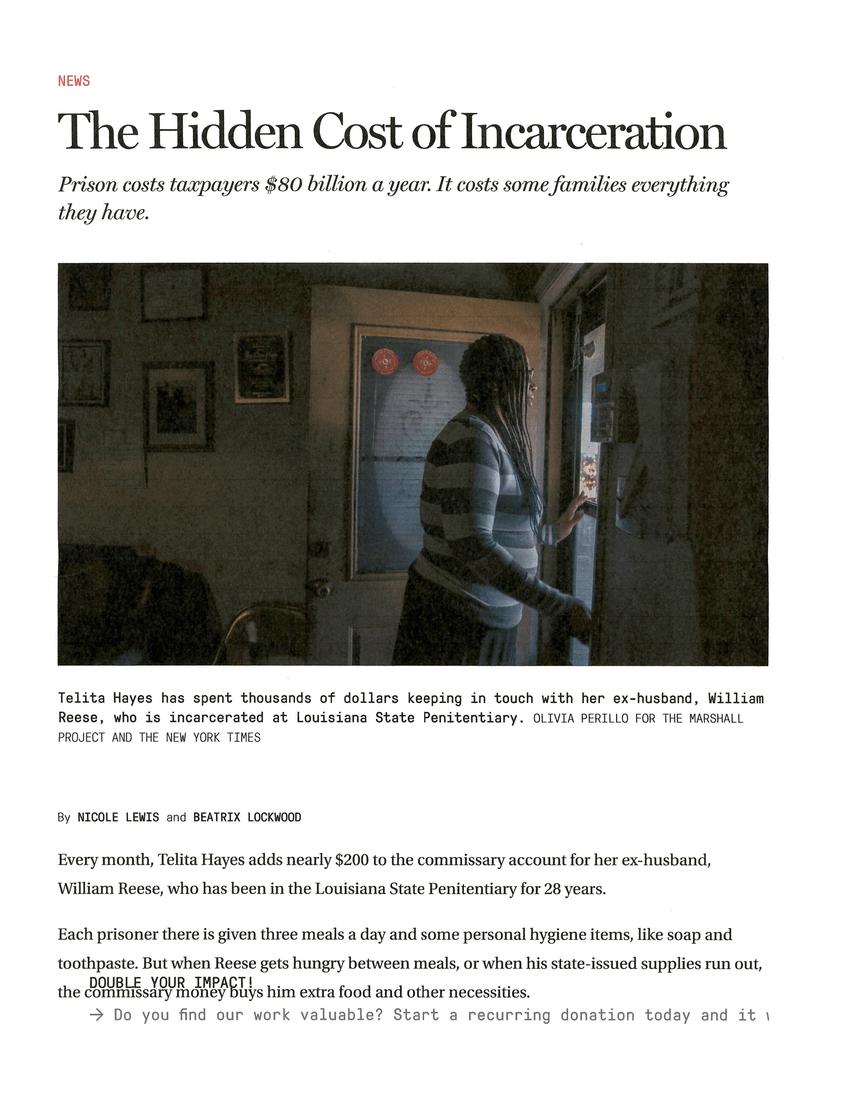 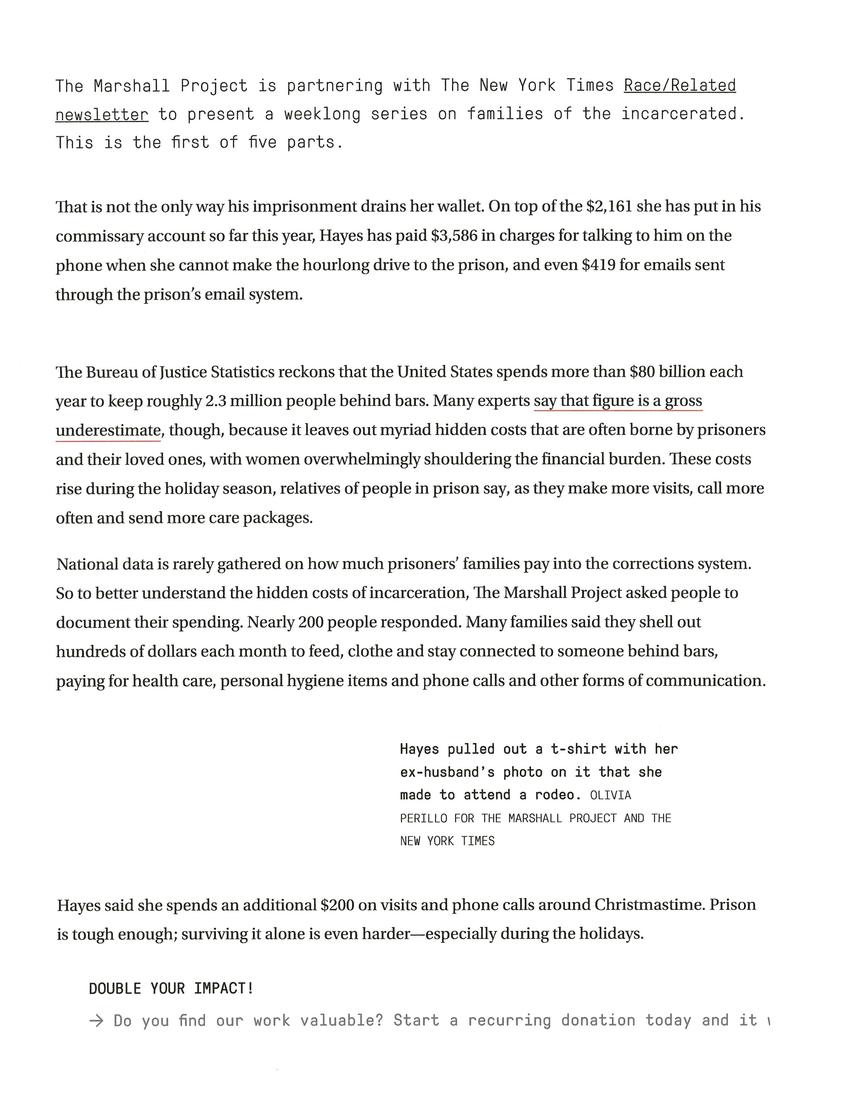 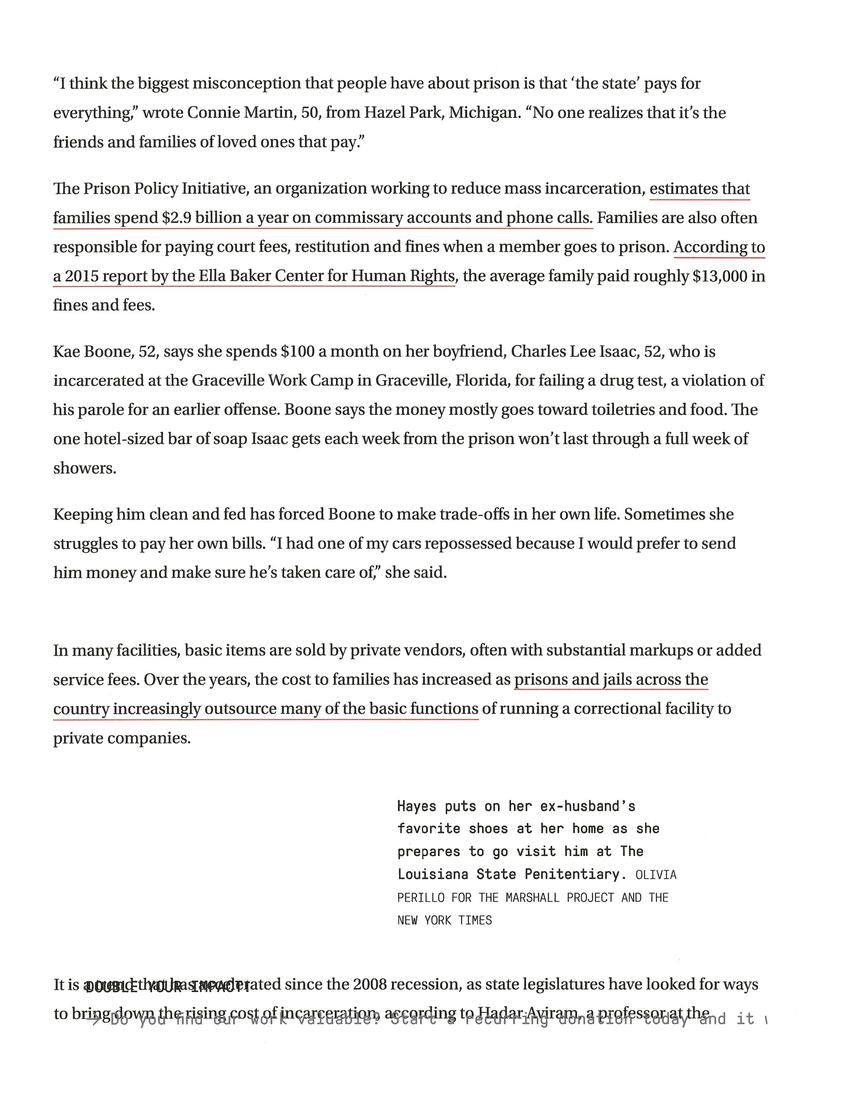 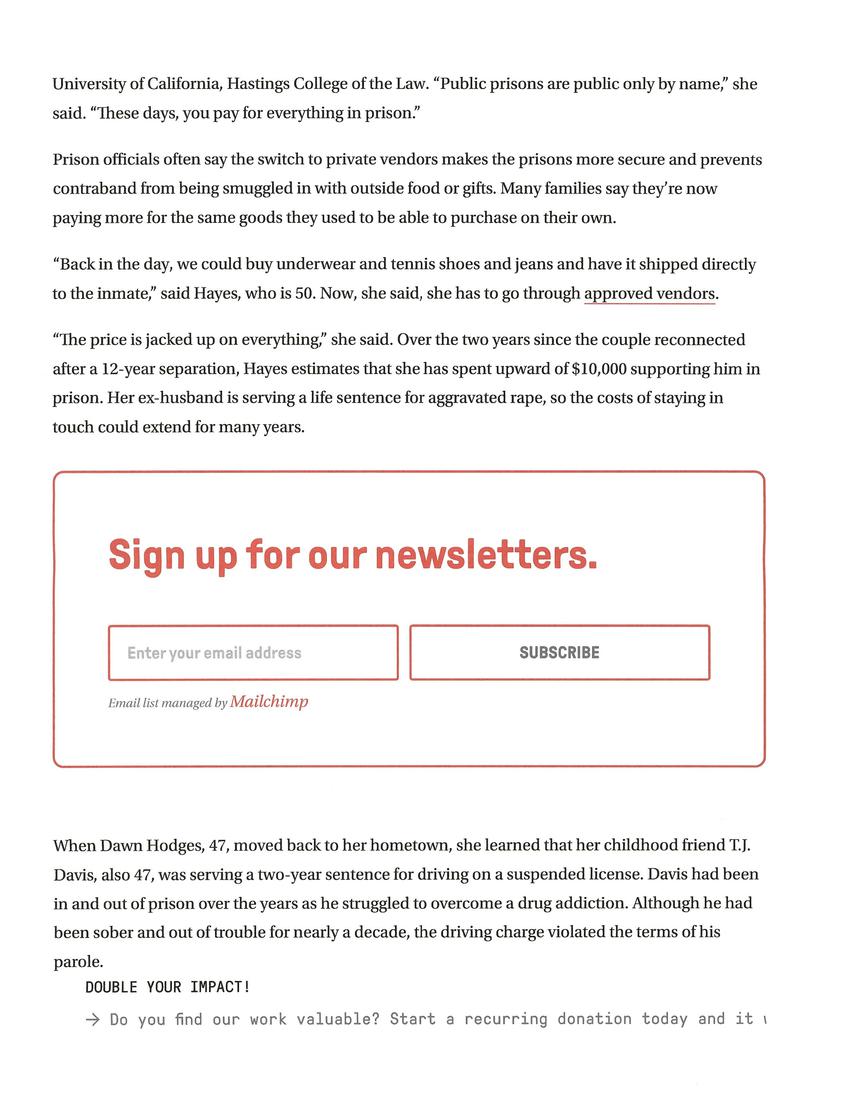 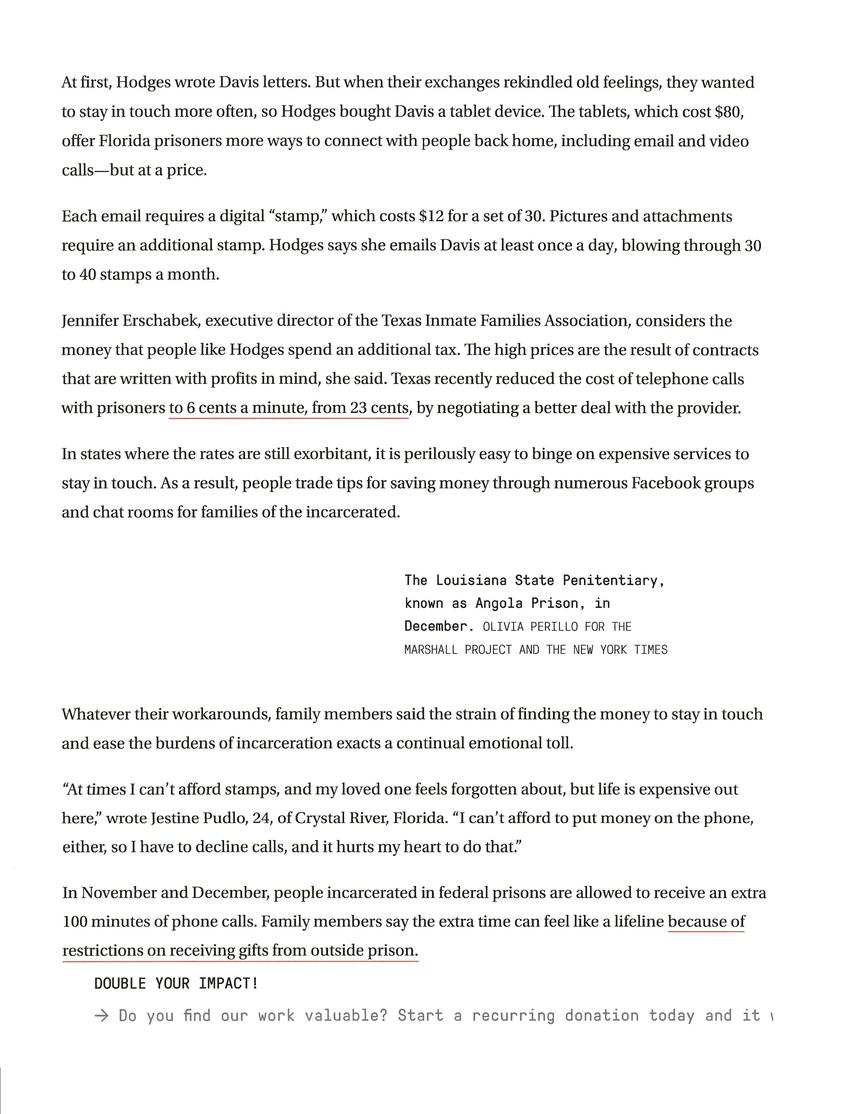 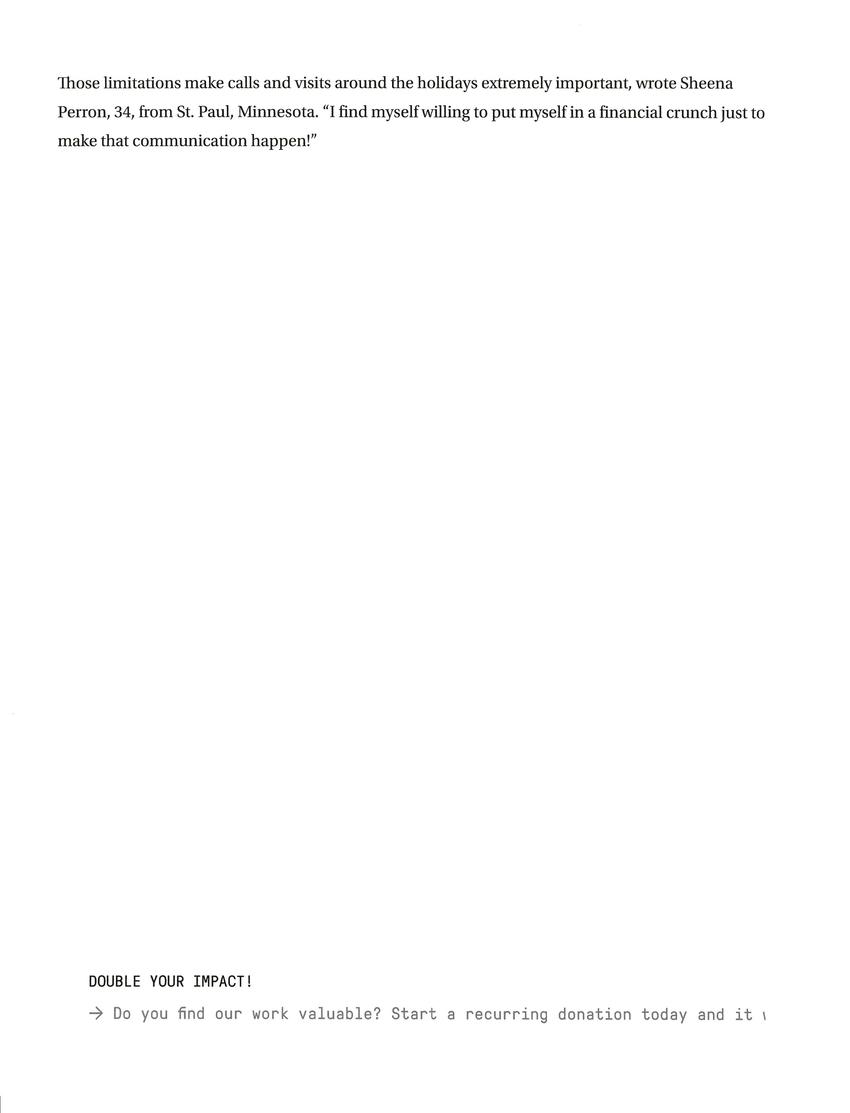 FILED 5:00 a.m.
12.17.2019
NEWS
The Hidden Cost of Incarceration
Prison costs taxpayers $80 billion a year. It costs some families everything they have.

Telita Hayes has spent thousands of dollars keeping in touch with her ex-husband, William Reese, who is incarcerated at Louisiana State Penitentiary. OLIVIA PERILLO FOR THE MARSHALL PROJECT AND THE NEW YORK TIMES
By NICOLE LEWIS and BEATRIX LOCKWOOD

The Marshall Project is partnering with The New York Times Race/Related newsletter to present a weeklong series on families of the incarcerated. This is the first of five parts.

Every month, Telita Hayes adds nearly $200 to the commissary account for her ex-husband, William Reese, who has been in the Louisiana State Penitentiary for 28 years.

Each prisoner there is given three meals a day and some personal hygiene items, like soap and toothpaste. But when Reese gets hungry between meals, or when his state-issued supplies run out, the commissary money buys him extra food and other necessities.

That is not the only way his imprisonment drains her wallet. On top of the $2,161 she has put in his commissary account so far this year, Hayes has paid $3,586 in charges for talking to him on the phone when she cannot make the hourlong drive to the prison, and even $419 for emails sent through the prison’s email system.

The Bureau of Justice Statistics reckons that the United States spends more than $80 billion each year to keep roughly 2.3 million people behind bars. Many experts say that figure is a gross underestimate, though, because it leaves out myriad hidden costs that are often borne by prisoners and their loved ones, with women overwhelmingly shouldering the financial burden. These costs rise during the holiday season, relatives of people in prison say, as they make more visits, call more often and send more care packages.

National data is rarely gathered on how much prisoners’ families pay into the corrections system. So to better understand the hidden costs of incarceration, The Marshall Project asked people to document their spending. Nearly 200 people responded. Many families said they shell out hundreds of dollars each month to feed, clothe and stay connected to someone behind bars, paying for health care, personal hygiene items and phone calls and other forms of communication.

Hayes pulled out a t-shirt with her ex-husband's photo on it that she made to attend a rodeo. OLIVIA PERILLO FOR THE MARSHALL PROJECT AND THE NEW YORK TIMES

Hayes said she spends an additional $200 on visits and phone calls around Christmastime. Prison is tough enough; surviving it alone is even harder—especially during the holidays.

“I think the biggest misconception that people have about prison is that ‘the state’ pays for everything,” wrote Connie Martin, 50, from Hazel Park, Michigan. “No one realizes that it’s the friends and families of loved ones that pay.”

The Prison Policy Initiative, an organization working to reduce mass incarceration, estimates that families spend $2.9 billion a year on commissary accounts and phone calls. Families are also often responsible for paying court fees, restitution and fines when a member goes to prison. According to a 2015 report by the Ella Baker Center for Human Rights, Forward Together, and Research Action Design, the average family paid roughly $13,000 in fines and fees.

Kae Boone, 52, says she spends $100 a month on her boyfriend, Charles Lee Isaac, 52, who is incarcerated at the Graceville Work Camp in Graceville, Florida, for failing a drug test, a violation of his parole for an earlier offense. Boone says the money mostly goes toward toiletries and food. The one hotel-sized bar of soap Isaac gets each week from the prison won’t last through a full week of showers.

Keeping him clean and fed has forced Boone to make trade-offs in her own life. Sometimes she struggles to pay her own bills. “I had one of my cars repossessed because I would prefer to send him money and make sure he’s taken care of,” she said.

In many facilities, basic items are sold by private vendors, often with substantial markups or added service fees. Over the years, the cost to families has increased as prisons and jails across the country increasingly outsource many of the basic functions of running a correctional facility to private companies.

Hayes puts on her ex-husband's favorite shoes at her home as she prepares to go visit him at The Louisiana State Penitentiary. OLIVIA PERILLO FOR THE MARSHALL PROJECT AND THE NEW YORK TIMES

It is a trend that has accelerated since the 2008 recession, as state legislatures have looked for ways to bring down the rising cost of incarceration, according to Hadar Aviram, a professor at the University of California, Hastings College of the Law. “Public prisons are public only by name,” she said. “These days, you pay for everything in prison.”

Prison officials often say the switch to private vendors makes the prisons more secure and prevents contraband from being smuggled in with outside food or gifts. Many families say they’re now paying more for the same goods they used to be able to purchase on their own.

“Back in the day, we could buy underwear and tennis shoes and jeans and have it shipped directly to the inmate,” said Hayes, who is 50. Now, she said, she has to go through approved vendors.

“The price is jacked up on everything,” she said. Over the two years since the couple reconnected after a 12-year separation, Hayes estimates that she has spent upward of $10,000 supporting him in prison. Her ex-husband is serving a life sentence for aggravated rape, so the costs of staying in touch could extend for many years.

When Dawn Hodges, 47, moved back to her hometown, she learned that her childhood friend T.J. Davis, also 47, was serving a two-year sentence for driving on a suspended license. Davis had been in and out of prison over the years as he struggled to overcome a drug addiction. Although he had been sober and out of trouble for nearly a decade, the driving charge violated the terms of his parole.

At first, Hodges wrote Davis letters. But when their exchanges rekindled old feelings, they wanted to stay in touch more often, so Hodges bought Davis a tablet device. The tablets, which cost $80, offer Florida prisoners more ways to connect with people back home, including email and video calls—but at a price.

Each email requires a digital “stamp,” which costs $12 for a set of 30. Pictures and attachments require an additional stamp. Hodges says she emails Davis at least once a day, blowing through 30 to 40 stamps a month.

Jennifer Erschabek, executive director of the Texas Inmate Families Association, considers the money that people like Hodges spend an additional tax. The high prices are the result of contracts that are written with profits in mind, she said. Texas recently reduced the cost of telephone calls with prisoners to 6 cents a minute, from 23 cents, by negotiating a better deal with the provider.

In states where the rates are still exorbitant, it is perilously easy to binge on expensive services to stay in touch. As a result, people trade tips for saving money through numerous Facebook groups and chat rooms for families of the incarcerated.

The Louisiana State Penitentiary, known as Angola Prison, in December. OLIVIA PERILLO FOR THE MARSHALL PROJECT AND THE NEW YORK TIMES

Whatever their workarounds, family members said the strain of finding the money to stay in touch and ease the burdens of incarceration exacts a continual emotional toll.

“At times I can’t afford stamps, and my loved one feels forgotten about, but life is expensive out here,” wrote Jestine Pudlo, 24, of Crystal River, Florida. “I can’t afford to put money on the phone, either, so I have to decline calls, and it hurts my heart to do that.”

In November and December, people incarcerated in federal prisons are allowed to receive an extra 100 minutes of phone calls. Family members say the extra time can feel like a lifeline because of restrictions on receiving gifts from outside prison.

Those limitations make calls and visits around the holidays extremely important, wrote Sheena Perron, 34, from St. Paul, Minnesota. “I find myself willing to put myself in a financial crunch just to make that communication happen!”

Nicole Lewis is a staff writer reporting on voting rights, technology and the privatization of services in prisons and jails. She previously wrote for The Fact Checker at The Washington Post. In 2016, she won an Education Writers Association award as part of a series on school desegregation in Mississippi.

Beatrix Lockwood has reported on criminal justice issues including families of the incarcerated, prison food, and electronic monitoring. She uses social media and engagement reporting to include more community voices in stories. 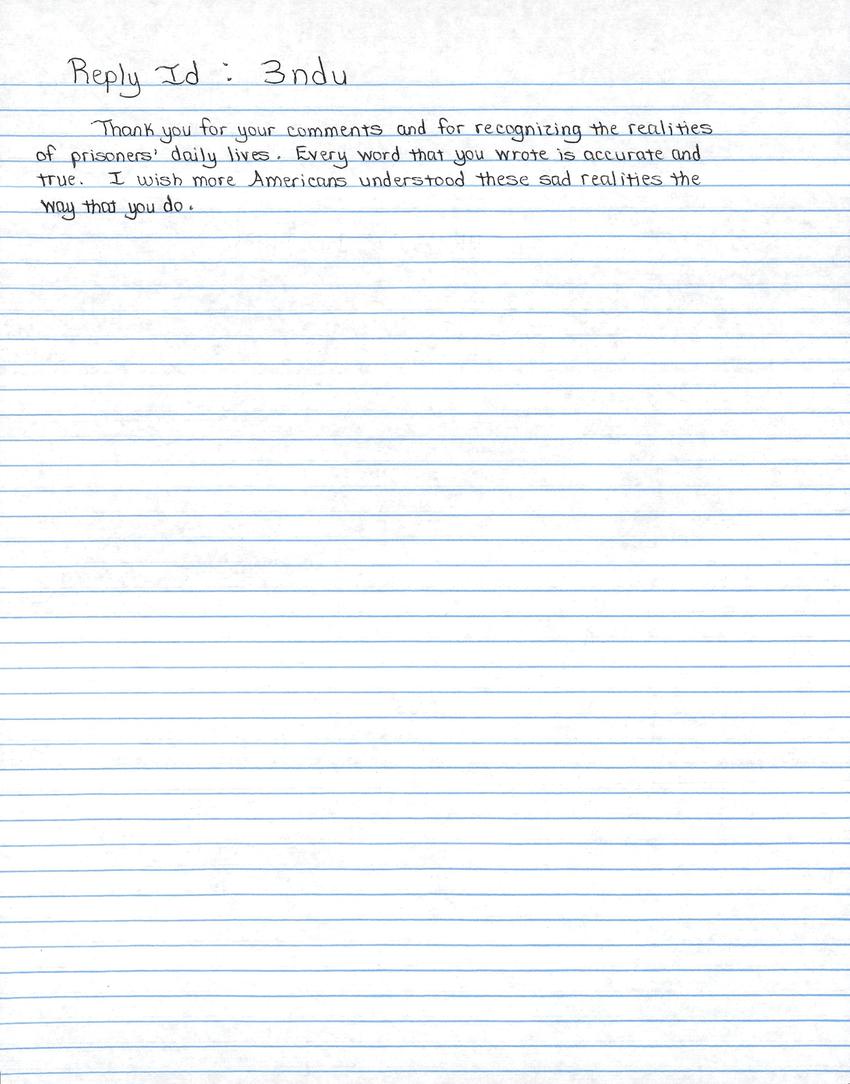 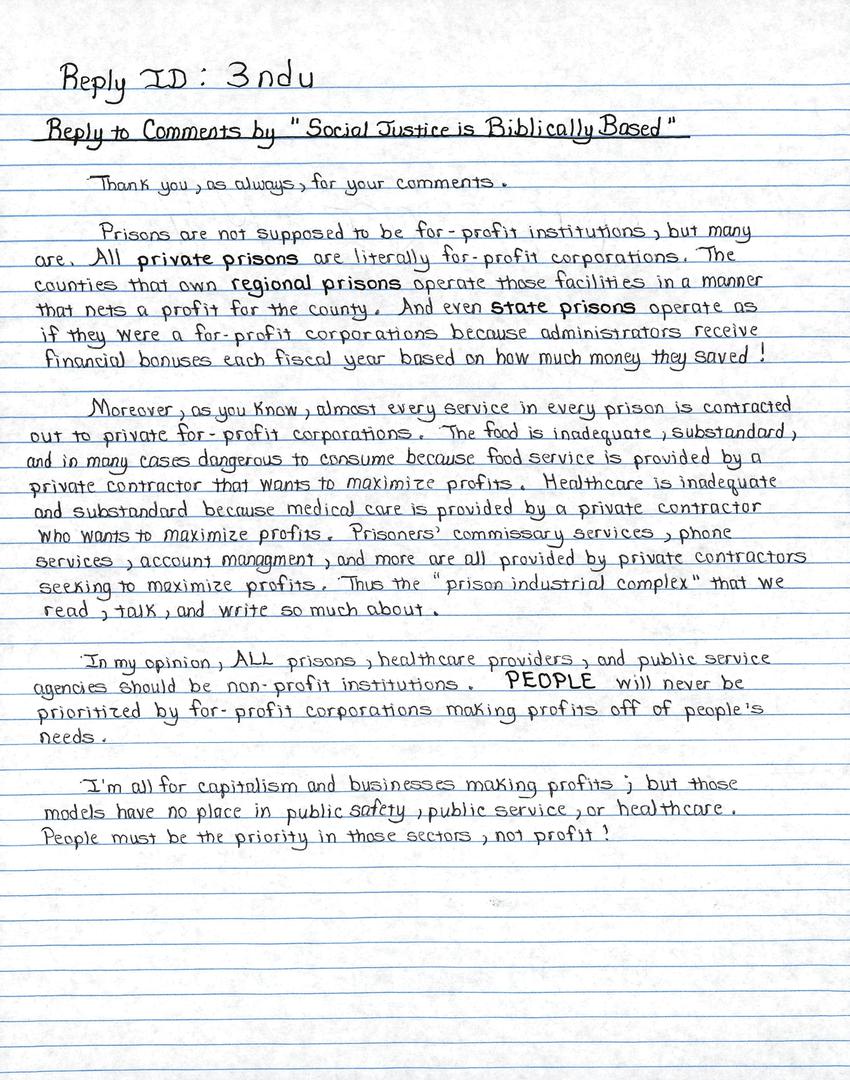 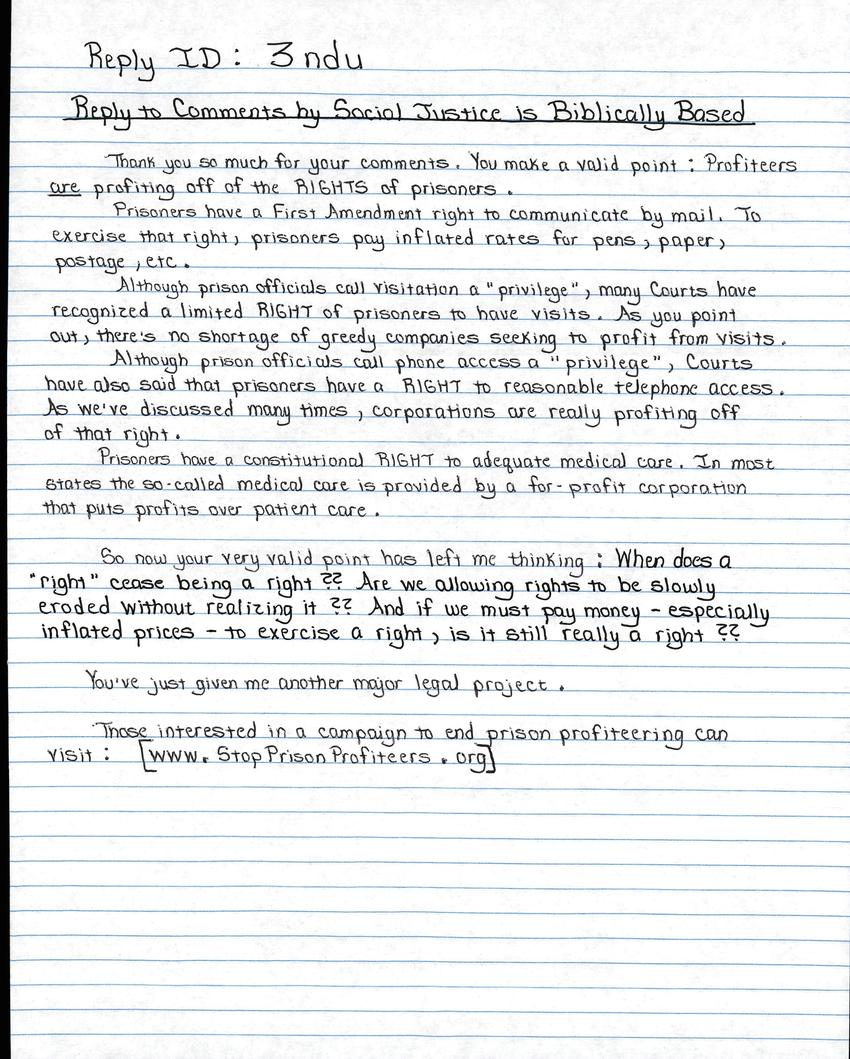