Cause Of Death: Undetermined 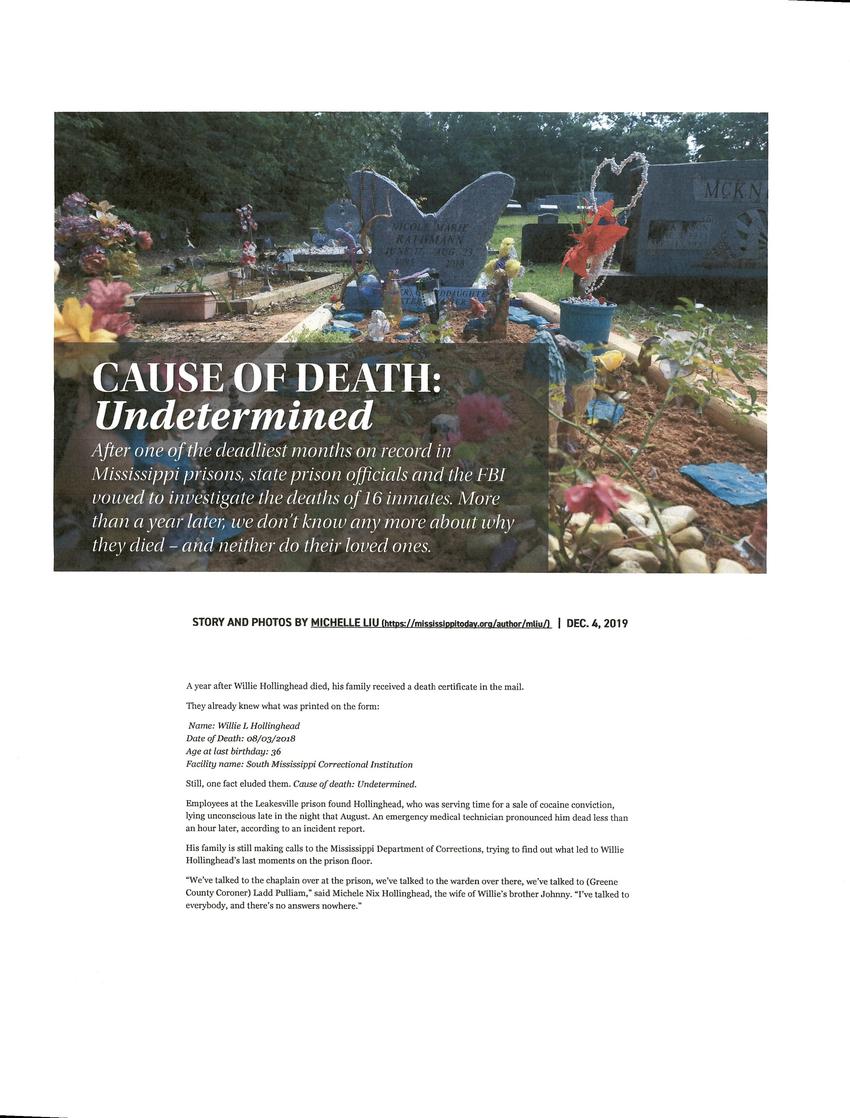 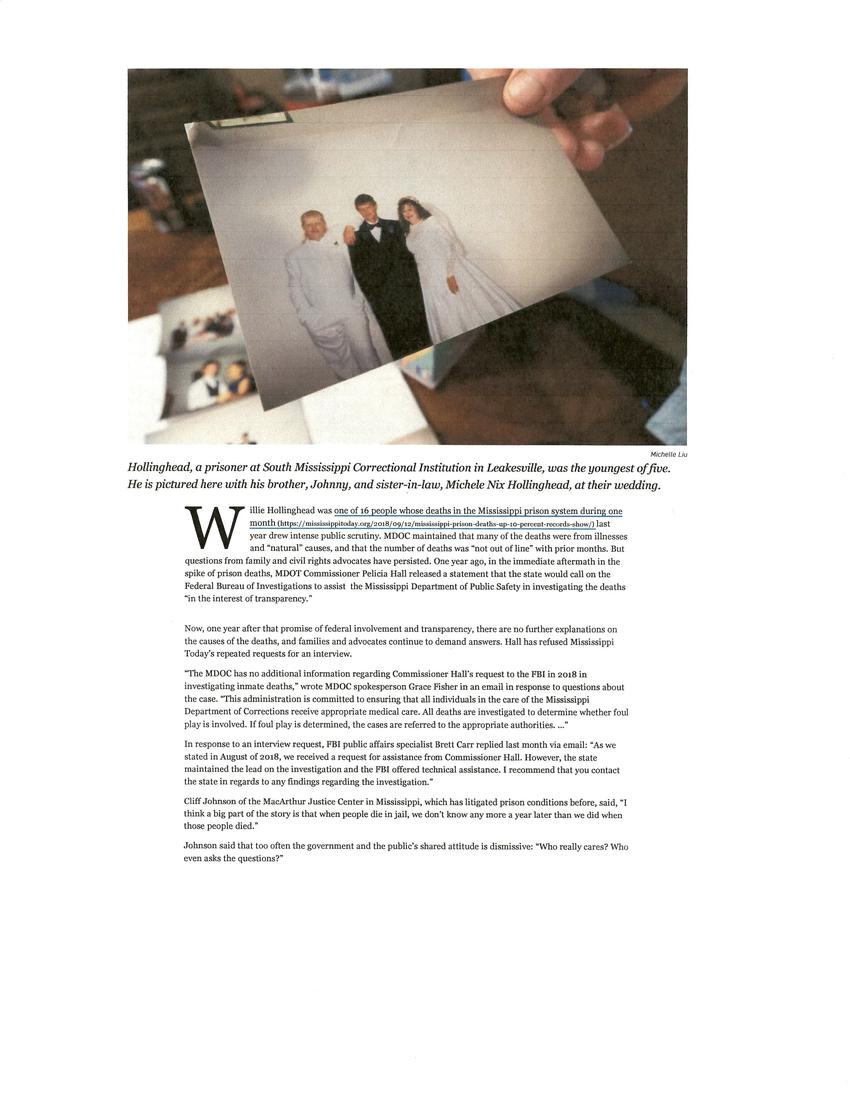 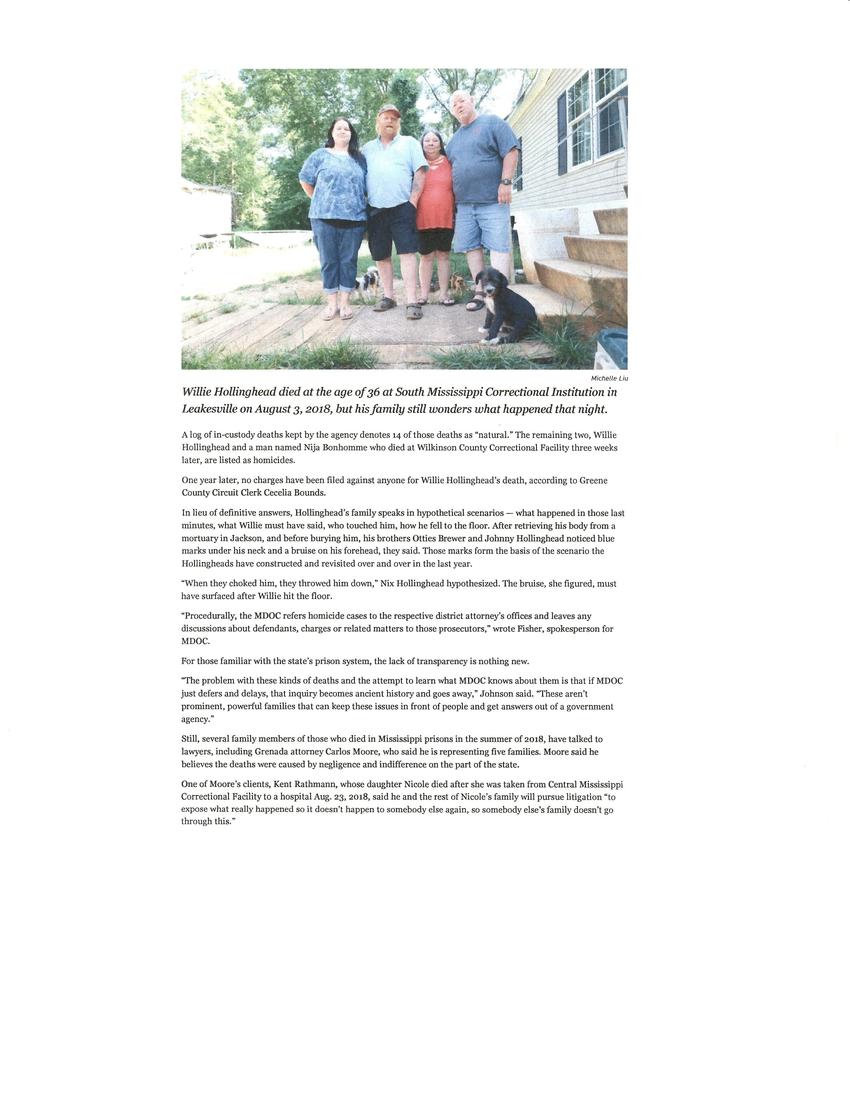 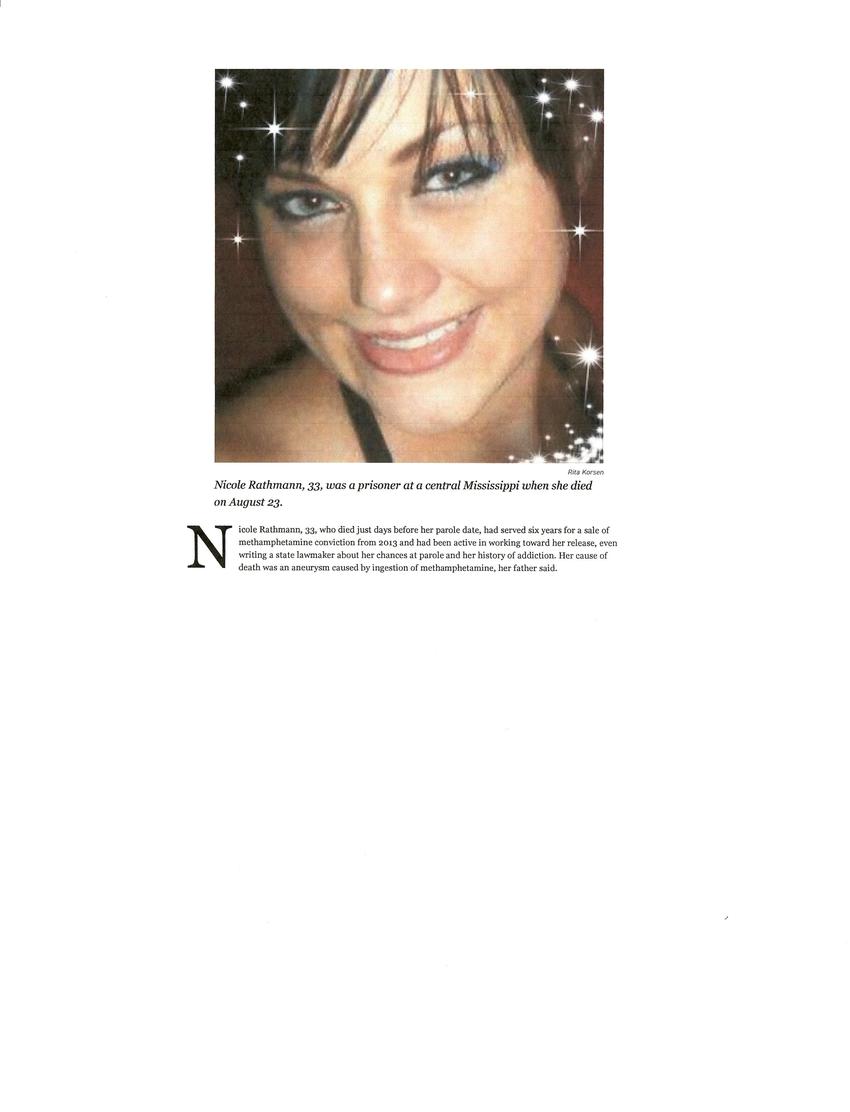 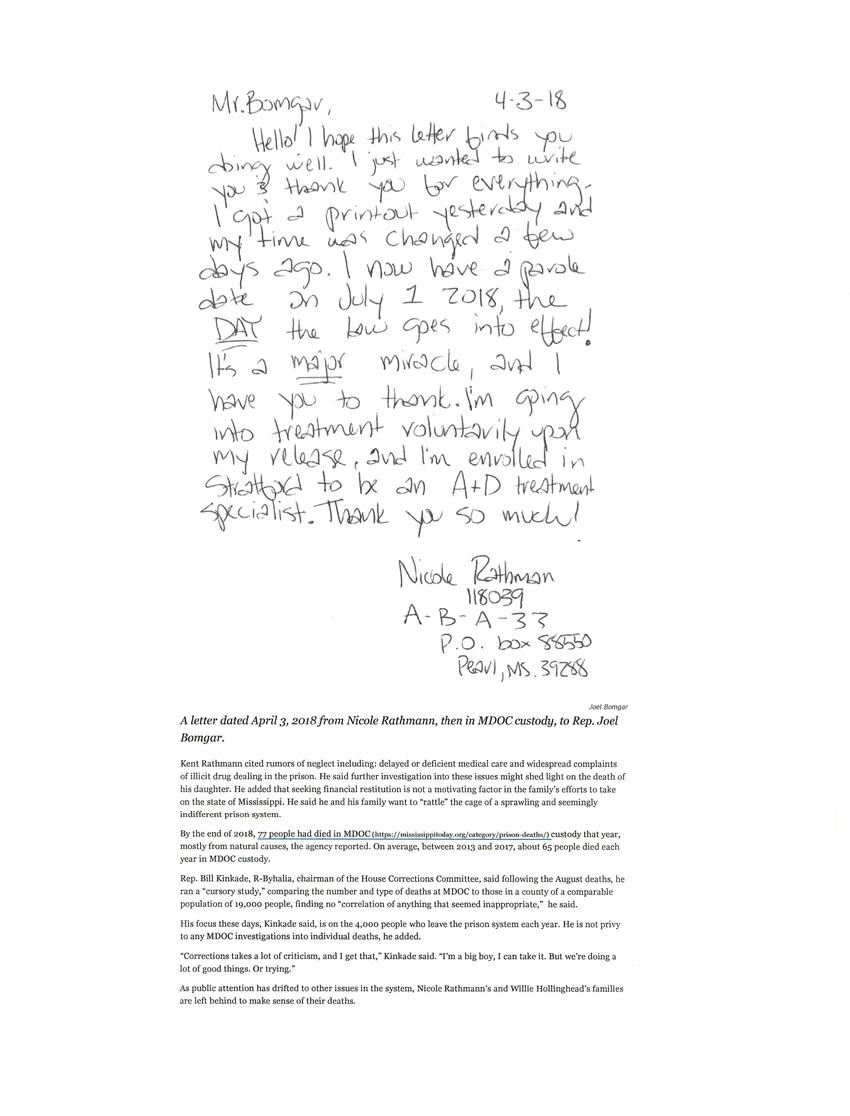 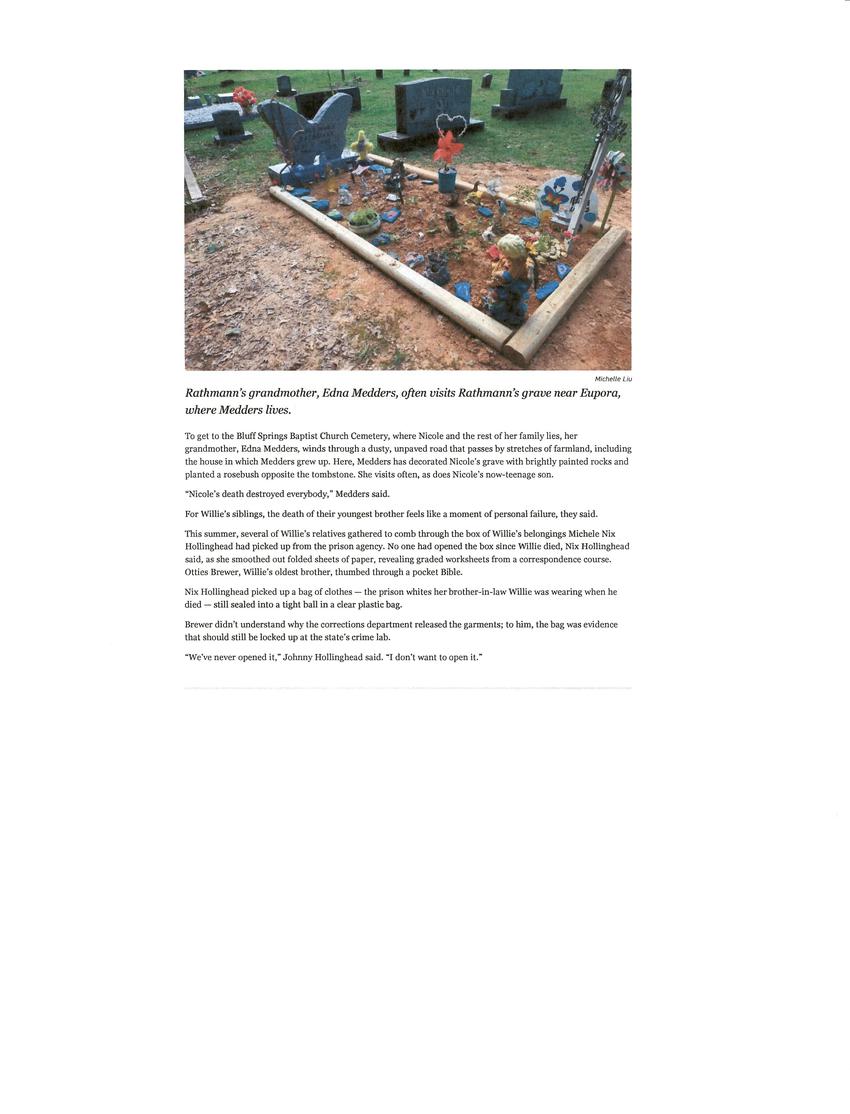 Cause of death: Undetermined
After one of the deadliest months on record in Mississippi prisons, state prison officials and the FBI vowed to investigate the deaths of 16 inmates. More than a year later, we don't know any more about why they died - and neither do their loved ones.

A year after Willie Hollinghead died, his family received a death certificate in the mail.

They already knew what was printed on the form:

Still, one fact eluded them. Cause of death: Undetermined.

Employees at the Leakesville prison found Hollinghead, who was serving time for a sale of cocaine conviction, lying unconscious late in the night that August. An emergency medical technician pronounced him dead less than an hour later, according to an incident report.

His family is still making calls to the Mississippi Department of Corrections, trying to find out what led to Willie Hollinghead’s last moments on the prison floor.

Michelle Liu
Hollinghead, a prisoner at South Mississippi Correctional Institution in Leakesville, was the youngest of five. He is pictured here with his brother, Johnny, and sister-in-law, Michele Nix Hollinghead, at their wedding.

Willie Hollinghead was one of 16 people whose deaths in the Mississippi prison system during one month last year drew intense public scrutiny. MDOC maintained that many of the deaths were from illnesses and “natural” causes, and that the number of deaths was “not out of line” with prior months. But questions from family and civil rights advocates have persisted. One year ago, in the immediate aftermath in the spike of prison deaths, MDOT Commissioner Pelicia Hall released a statement that the state would call on the Federal Bureau of Investigations to assist the Mississippi Department of Public Safety in investigating the deaths “in the interest of transparency.”

Now, one year after that promise of federal involvement and transparency, there are no further explanations on the causes of the deaths, and families and advocates continue to demand answers. Hall has refused Mississippi Today’s repeated requests for an interview.

“The MDOC has no additional information regarding Commissioner Hall’s request to the FBI in 2018 in investigating inmate deaths,” wrote MDOC spokesperson Grace Fisher in an email in response to questions about the case. “This administration is committed to ensuring that all individuals in the care of the Mississippi Department of Corrections receive appropriate medical care. All deaths are investigated to determine whether foul play is involved. If foul play is determined, the cases are referred to the appropriate authorities. …”

In response to an interview request, FBI public affairs specialist Brett Carr replied last month via email: “As we stated in August of 2018, we received a request for assistance from Commissioner Hall. However, the state maintained the lead on the investigation and the FBI offered technical assistance. I recommend that you contact the state in regards to any findings regarding the investigation.”

Cliff Johnson of the MacArthur Justice Center in Mississippi, which has litigated prison conditions before, said, “I think a big part of the story is that when people die in jail, we don’t know any more a year later than we did when those people died.”

Johnson said that too often the government and the public’s shared attitude is dismissive: “Who really cares? Who even asks the questions?”

Michelle Liu
Willie Hollinghead died at the age of 36 at South Mississippi Correctional Institution in Leakesville on August 3, 2018, but his family still wonders what happened that night.

A log of in-custody deaths kept by the agency denotes 14 of those deaths as “natural.” The remaining two, Willie Hollinghead and a man named Nija Bonhomme who died at Wilkinson County Correctional Facility three weeks later, are listed as homicides.

One year later, no charges have been filed against anyone for Willie Hollinghead’s death, according to Greene County Circuit Clerk Cecelia Bounds.

In lieu of definitive answers, Hollinghead’s family speaks in hypothetical scenarios — what happened in those last minutes, what Willie must have said, who touched him, how he fell to the floor. After retrieving his body from a mortuary in Jackson, and before burying him, his brothers Otties Brewer and Johnny Hollinghead noticed blue marks under his neck and a bruise on his forehead, they said. Those marks form the basis of the scenario the Hollingheads have constructed and revisited over and over in the last year.

“When they choked him, they throwed him down,” Nix Hollinghead hypothesized. The bruise, she figured, must have surfaced after Willie hit the floor.

“Procedurally, the MDOC refers homicide cases to the respective district attorney’s offices and leaves any discussions about defendants, charges or related matters to those prosecutors,” wrote Fisher, spokesperson for MDOC.

For those familiar with the state’s prison system, the lack of transparency is nothing new.

“The problem with these kinds of deaths and the attempt to learn what MDOC knows about them is that if MDOC just defers and delays, that inquiry becomes ancient history and goes away,” Johnson said. “These aren’t prominent, powerful families that can keep these issues in front of people and get answers out of a government agency.”

Still, several family members of those who died in Mississippi prisons in the summer of 2018, have talked to lawyers, including Grenada attorney Carlos Moore, who said he is representing five families. Moore said he believes the deaths were caused by negligence and indifference on the part of the state.

One of Moore’s clients, Kent Rathmann, whose daughter Nicole died after she was taken from Central Mississippi Correctional Facility to a hospital Aug. 23, 2018, said he and the rest of Nicole’s family will pursue litigation “to expose what really happened so it doesn’t happen to somebody else again, so somebody else’s family doesn’t go through this.”

Rita Korsen
Nicole Rathmann, 33, was a prisoner at a central Mississippi when she died on August 23.

Nicole Rathmann, 33, who died just days before her parole date, had served six years for a sale of methamphetamine conviction from 2013 and had been active in working toward her release, even writing a state lawmaker about her chances at parole and her history of addiction. Her cause of death was an aneurysm caused by ingestion of methamphetamine, her father said.

Kent Rathmann cited rumors of neglect including: delayed or deficient medical care and widespread complaints of illicit drug dealing in the prison. He said further investigation into these issues might shed light on the death of his daughter. He added that seeking financial restitution is not a motivating factor in the family’s efforts to take on the state of Mississippi. He said he and his family want to “rattle” the cage of a sprawling and seemingly indifferent prison system.

By the end of 2018, 77 people had died in MDOC custody that year, mostly from natural causes, the agency reported. On average, between 2013 and 2017, about 65 people died each year in MDOC custody.

Rep. Bill Kinkade, R-Byhalia, chairman of the House Corrections Committee, said following the August deaths, he ran a “cursory study,” comparing the number and type of deaths at MDOC to those in a county of a comparable population of 19,000 people, finding no “correlation of anything that seemed inappropriate,” he said.

His focus these days, Kinkade said, is on the 4,000 people who leave the prison system each year. He is not privy to any MDOC investigations into individual deaths, he added.

“Corrections takes a lot of criticism, and I get that,” Kinkade said. “I’m a big boy, I can take it. But we’re doing a lot of good things. Or trying.”

As public attention has drifted to other issues in the system, Nicole Rathmann’s and Willie Hollinghead’s families are left behind to make sense of their deaths.

To get to the Bluff Springs Baptist Church Cemetery, where Nicole and the rest of her family lies, her grandmother, Edna Medders, winds through a dusty, unpaved road that passes by stretches of farmland, including the house in which Medders grew up. Here, Medders has decorated Nicole’s grave with brightly painted rocks and planted a rosebush opposite the tombstone. She visits often, as does Nicole’s now-teenage son.

For Willie’s siblings, the death of their youngest brother feels like a moment of personal failure, they said.

This summer, several of Willie’s relatives gathered to comb through the box of Willie’s belongings Michele Nix Hollinghead had picked up from the prison agency. No one had opened the box since Willie died, Nix Hollinghead said, as she smoothed out folded sheets of paper, revealing graded worksheets from a correspondence course. Otties Brewer, Willie’s oldest brother, thumbed through a pocket Bible.

Nix Hollinghead picked up a bag of clothes — the prison whites her brother-in-law Willie was wearing when he died — still sealed into a tight ball in a clear plastic bag.

Brewer didn’t understand why the corrections department released the garments; to him, the bag was evidence that should still be locked up at the state’s crime lab.

“We’ve never opened it,” Johnny Hollinghead said. “I don’t want to open it.”

Michelle Liu is a 2018 corps member for Report for America, a national service program that places talented journalists in local newsrooms. She has covered criminal justice issues across the state since joining our team June 2018. Her work has appeared in the New Haven Independent.

Transparency is demanded in Church, civic organizations, school administration, public officials, and high-level corporate management. Why does the American public allow inmates to be stripped of all rights...including the right of human dignity, value, and worth. Being in custody means being in the care of...so why hide behind the bulwark of institutional life is not a constitutional life? I am not so naive to believe that this lack of humanity extends only to staff...associations on the in also believe in the silence that is lack of transparency. Until humans treat all humans as human...with all the rights and obligations thereof...inequity will result. Know that every state has the same problems, although I understand that Texas, Arkansas, Tennessee, Georgia, and Florida are particularly harmful and uncaring to the human rights of the incarcerated. 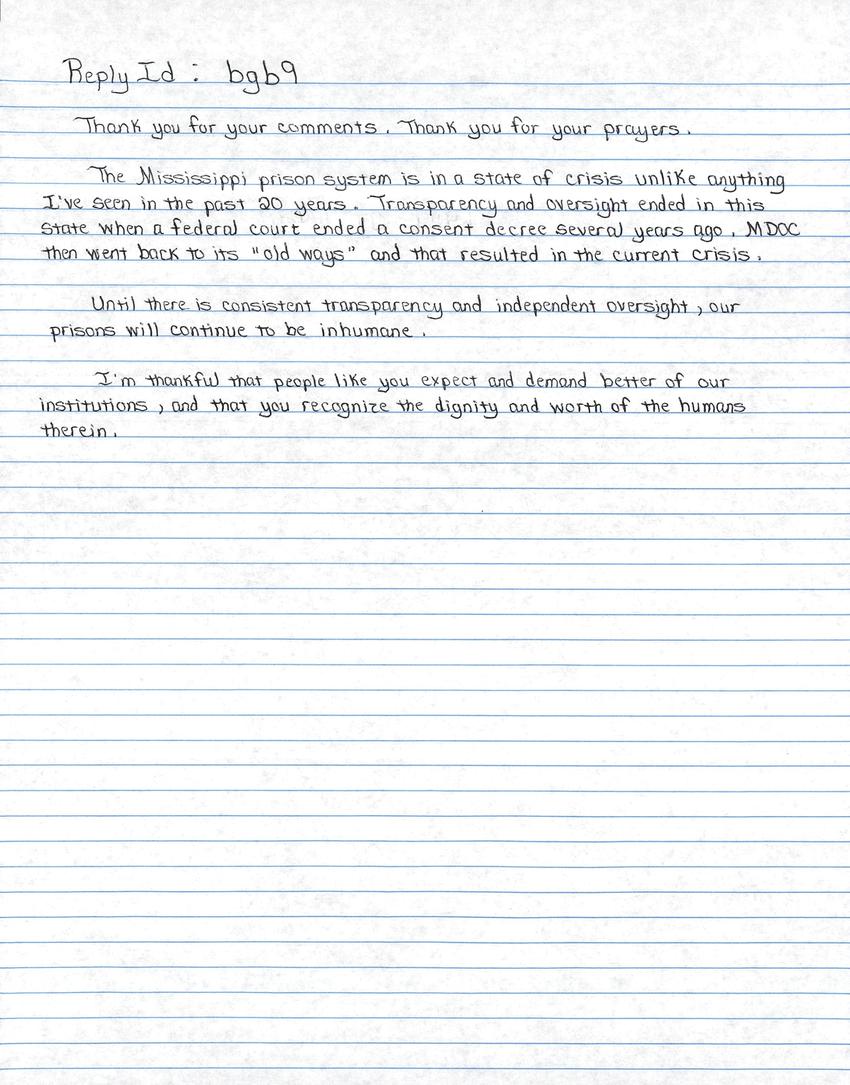