Karen Daniel, Champion Of The Wrongly Convicted, Lived A Life In Full 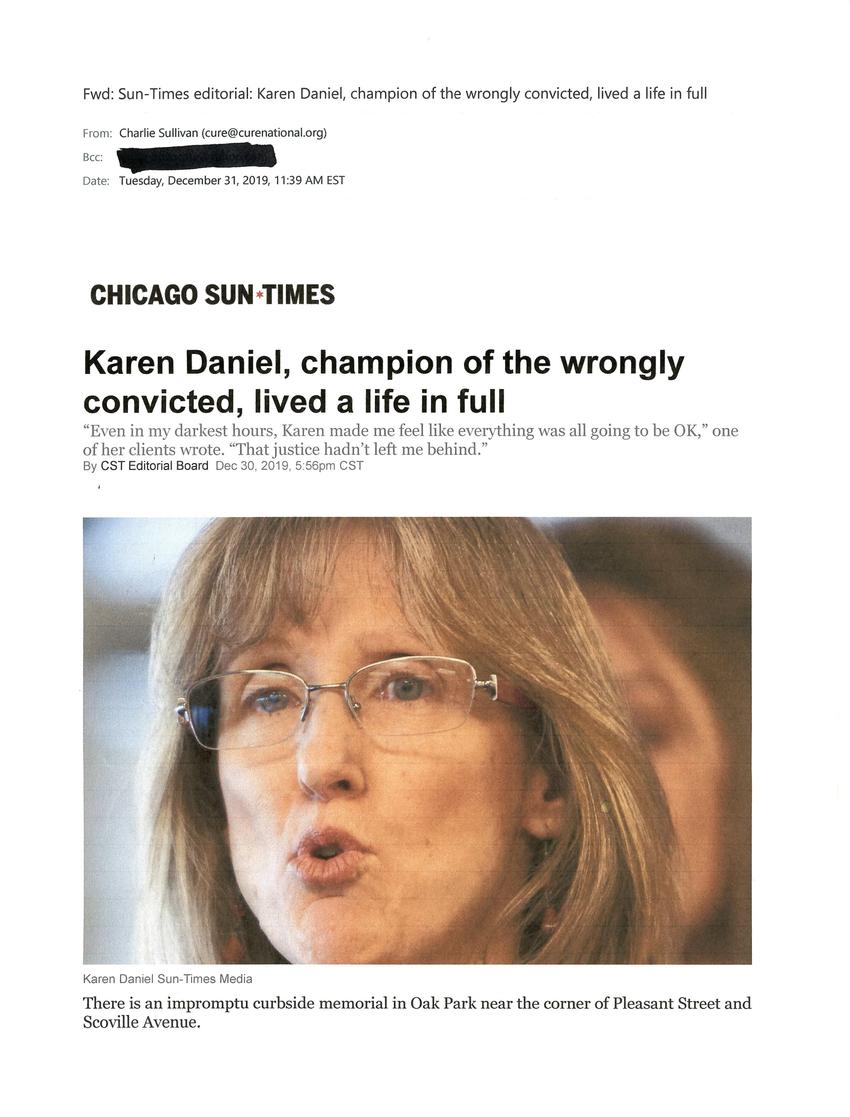 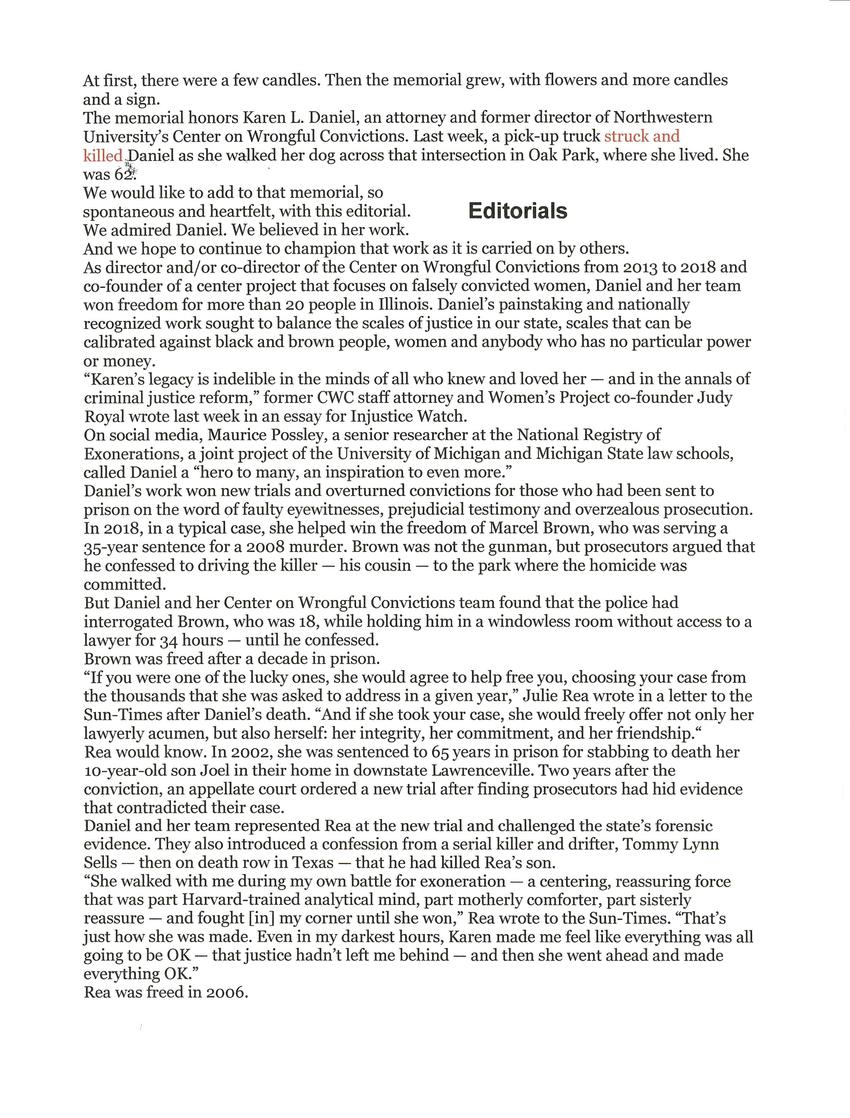 Karen Daniel, champion of the wrongly convicted, lived a life in full

“Even in my darkest hours, Karen made me feel like everything was all going to be OK,” one of her clients wrote. “That justice hadn’t left me behind.”
By CST Editorial Board Dec 30, 2019, 5:56pm CST
Share this story

There is an impromptu curbside memorial in Oak Park near the corner of Pleasant Street and Scoville Avenue.

At first, there were a few candles. Then the memorial grew, with flowers and more candles and a sign.

The memorial honors Karen L. Daniel, an attorney and former director of Northwestern University’s Center on Wrongful Convictions. Last week, a pick-up truck struck and killed Daniel as she walked her dog across that intersection in Oak Park, where she lived. She was 62.
Editorials

We would like to add to that memorial, so spontaneous and heartfelt, with this editorial. We admired Daniel. We believed in her work. And we hope to continue to champion that work as it is carried on by others.

As director and/or co-director of the Center on Wrongful Convictions from 2013 to 2018 and co-founder of a center project that focuses on falsely convicted women, Daniel and her team won freedom for more than 20 people in Illinois. Daniel’s painstaking and nationally recognized work sought to balance the scales of justice in our state, scales that can be calibrated against black and brown people, women and anybody who has no particular power or money.

“Karen’s legacy is indelible in the minds of all who knew and loved her — and in the annals of criminal justice reform,” former CWC staff attorney and Women’s Project co-founder Judy Royal wrote last week in an essay for Injustice Watch.

On social media, Maurice Possley, a senior researcher at the National Registry of Exonerations, a joint project of the University of Michigan and Michigan State law schools, called Daniel a “hero to many, an inspiration to even more.”

Daniel’s work won new trials and overturned convictions for those who had been sent to prison on the word of faulty eyewitnesses, prejudicial testimony and overzealous prosecution.

In 2018, in a typical case, she helped win the freedom of Marcel Brown, who was serving a 35-year sentence for a 2008 murder. Brown was not the gunman, but prosecutors argued that he confessed to driving the killer — his cousin — to the park where the homicide was committed.

But Daniel and her Center on Wrongful Convictions team found that the police had interrogated Brown, who was 18, while holding him in a windowless room without access to a lawyer for 34 hours — until he confessed.

Brown was freed after a decade in prison.

“If you were one of the lucky ones, she would agree to help free you, choosing your case from the thousands that she was asked to address in a given year,” Julie Rea wrote in a letter to the Sun-Times after Daniel’s death. “And if she took your case, she would freely offer not only her lawyerly acumen, but also herself: her integrity, her commitment, and her friendship.“

Rea would know. In 2002, she was sentenced to 65 years in prison for stabbing to death her 10-year-old son Joel in their home in downstate Lawrenceville. Two years after the conviction, an appellate court ordered a new trial after finding prosecutors had hid evidence that contradicted their case.

Daniel and her team represented Rea at the new trial and challenged the state’s forensic evidence. They also introduced a confession from a serial killer and drifter, Tommy Lynn Sells — then on death row in Texas — that he had killed Rea’s son.

“She walked with me during my own battle for exoneration — a centering, reassuring force that was part Harvard-trained analytical mind, part motherly comforter, part sisterly reassure — and fought [in] my corner until she won,” Rea wrote to the Sun-Times. “That’s just how she was made. Even in my darkest hours, Karen made me feel like everything was all going to be OK — that justice hadn’t left me behind — and then she went ahead and made everything OK.”

“Karen was articulate, wise, masterful in a courtroom,” Rea wrote. “But beyond the awards and accomplishments, she was a deeply human being. Perhaps that’s what made her the lawyer she was.”

If the best measure of a life is the good we do for others, Karen Daniel lived a life in full.