How To Fix Our Prisons? Let The Public Inside 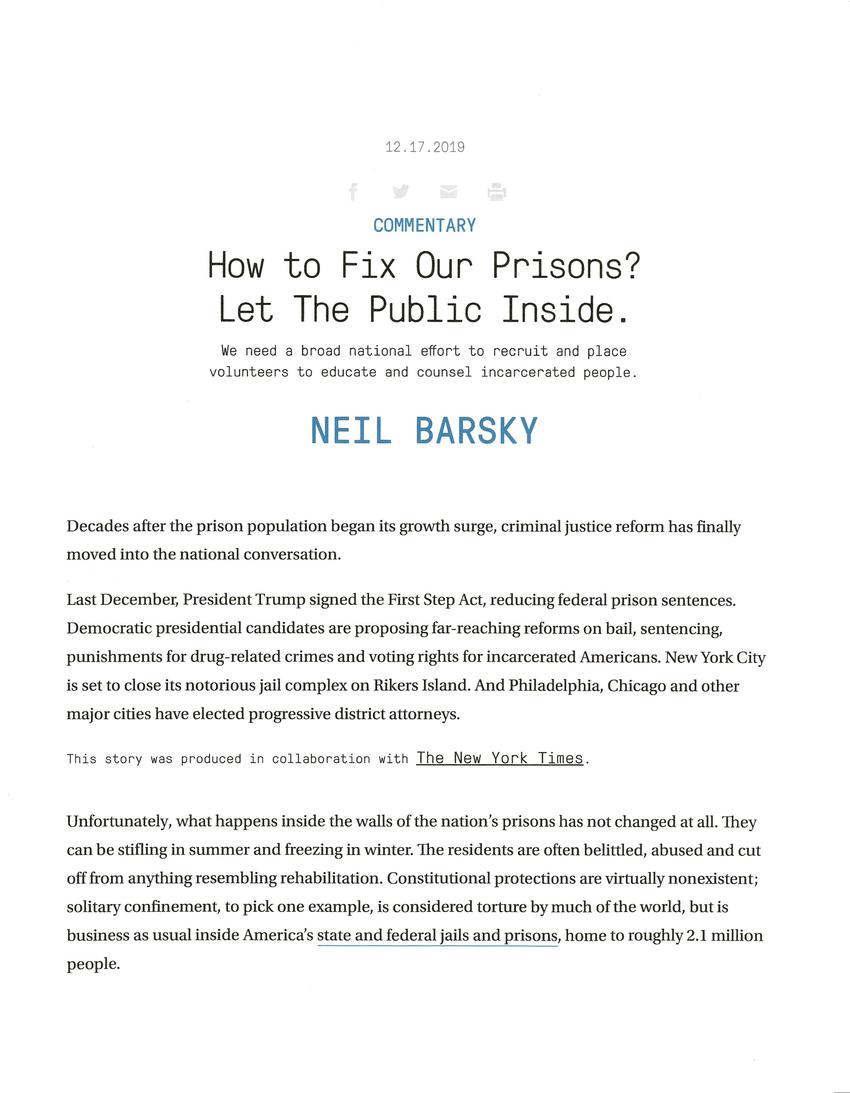 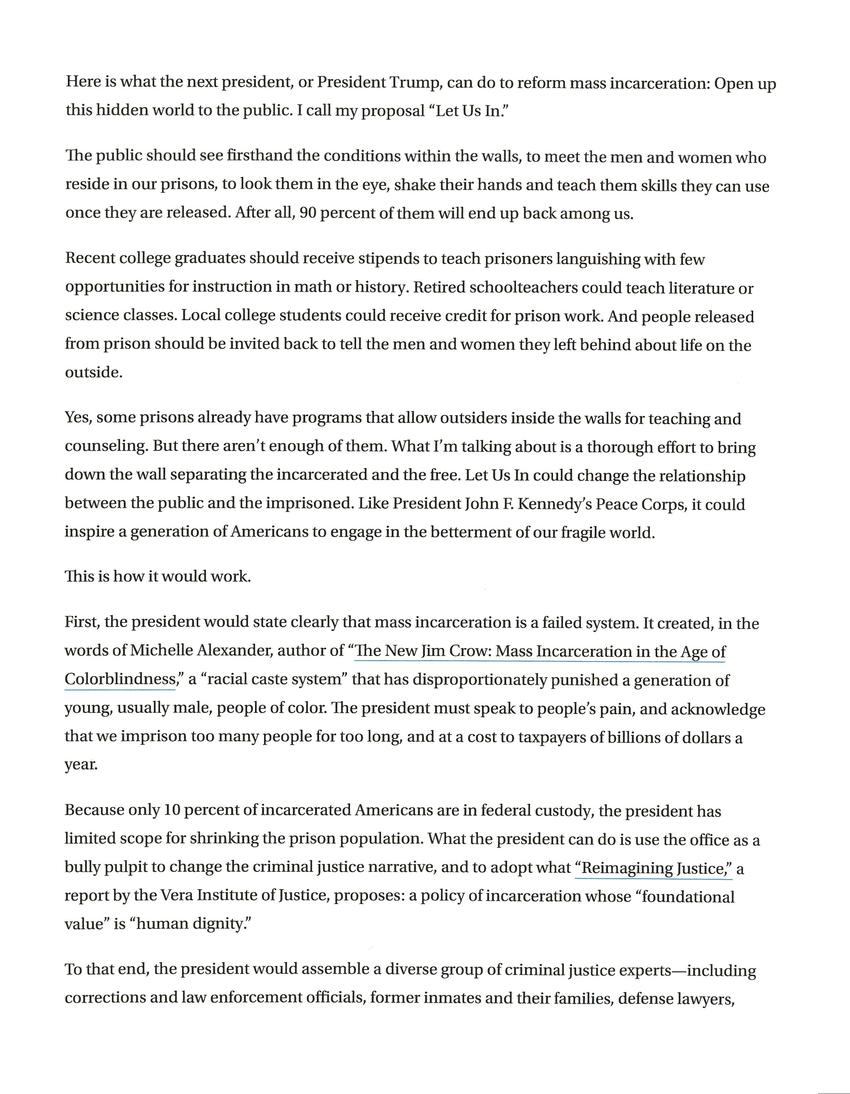 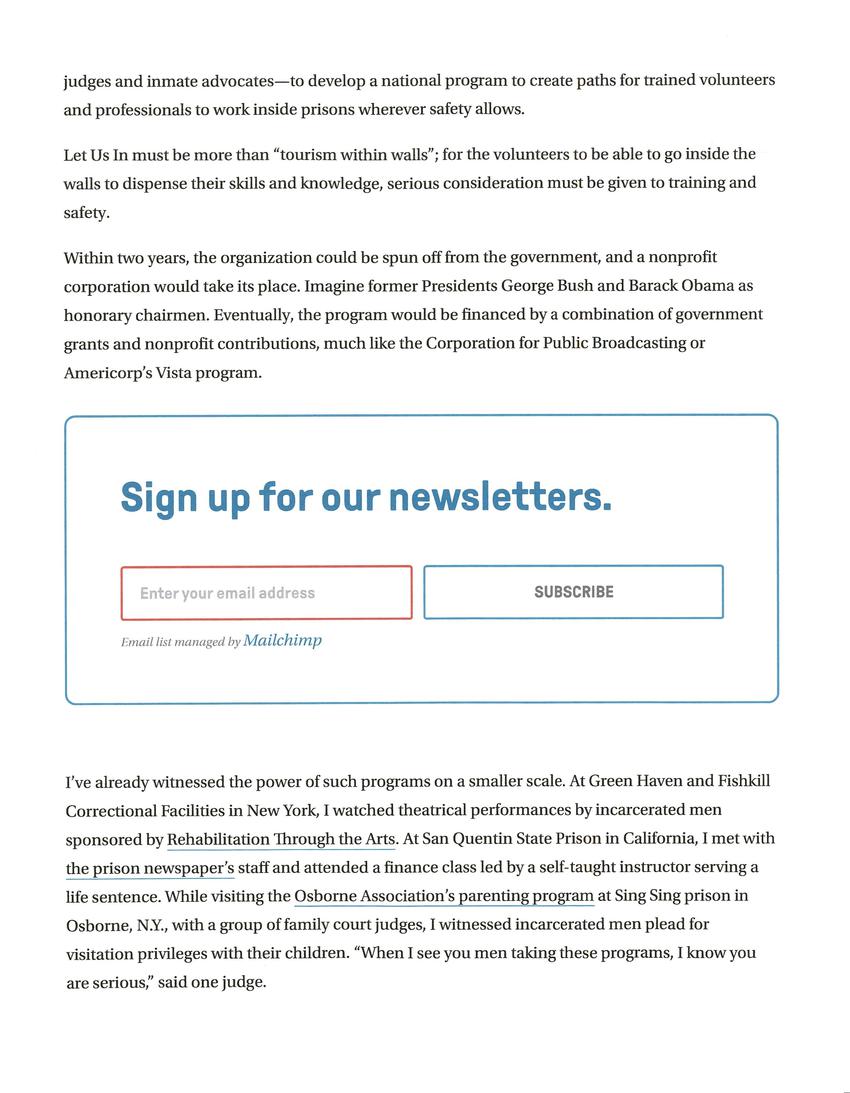 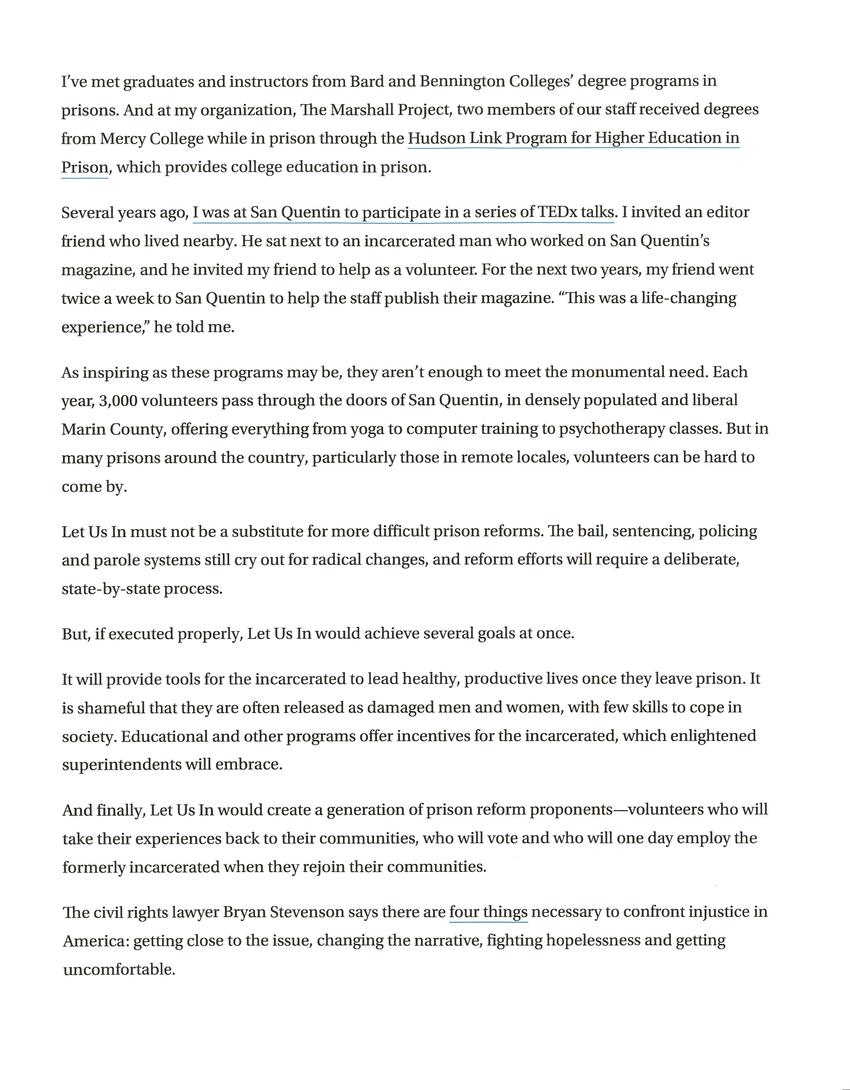 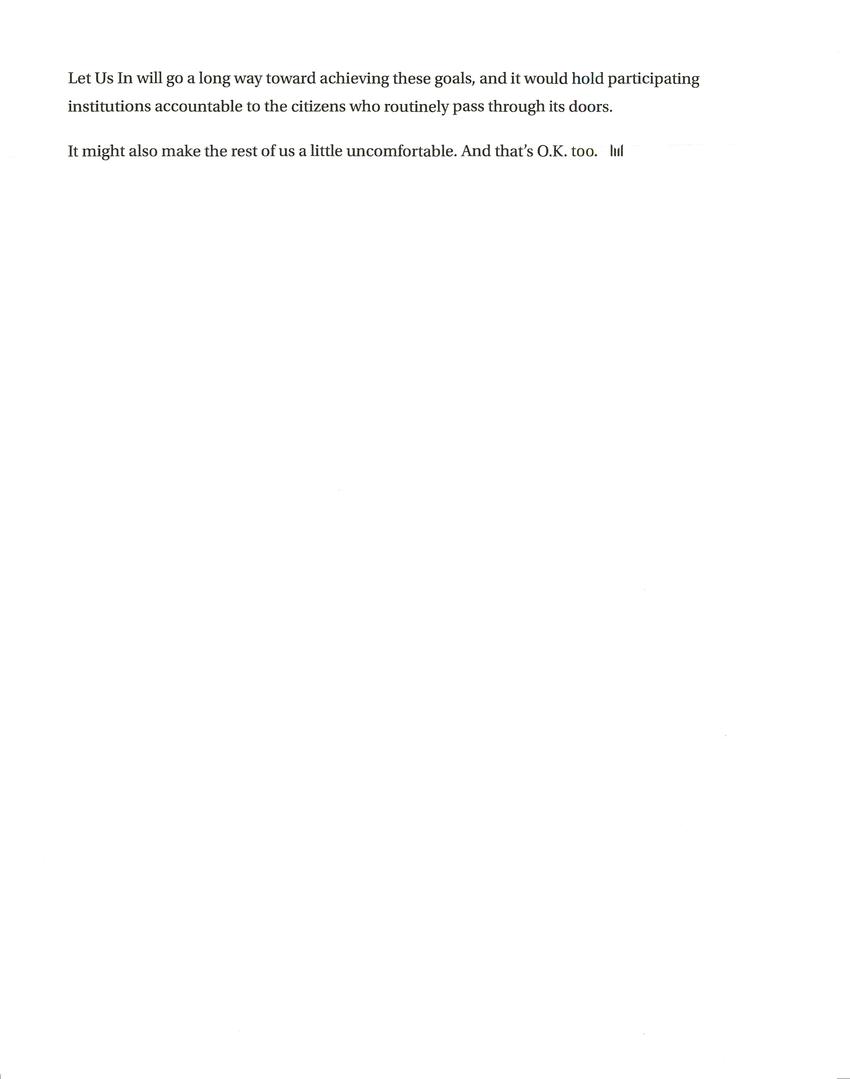 How to Fix Our Prisons?
Let The Public Inside.
We need a broad national effort to recruit and place volunteers to educate and counsel incarcerated people.

Decades after the prison population began its growth surge, criminal justice reform has finally moved into the national conversation.

[This story was produced in collaboration with The New York Times]

Unfortunately, what happens inside the walls of the nation’s prisons has not changed at all. They can be stifling in summer and freezing in winter. The residents are often belittled, abused and cut off from anything resembling rehabilitation. Constitutional protections are virtually nonexistent; solitary confinement, to pick one example, is considered torture by much of the world, but is business as usual inside America’s state and federal jails and prisons, home to roughly 2.1 million people.

Here is what the next president, or President Trump, can do to reform mass incarceration: Open up this hidden world to the public. I call my proposal “Let Us In.”

The public should see firsthand the conditions within the walls, meet the men and women who reside in our prisons, look them in the eye, shake their hands and teach them skills they can use once they are released. After all, 90 percent of them will end up back among us.

Recent college graduates should receive stipends to teach prisoners languishing with few opportunities for instruction in math or history. Retired schoolteachers could teach literature or science classes. Local college students could receive credit for prison work. And people released from prison should be invited back to tell the men and women they left behind about life on the outside.

Yes, some prisons already have programs that allow outsiders inside the walls for teaching and counseling. But there aren’t enough of them. What I’m talking about is a thorough effort to bring down the wall separating the incarcerated and the free. Let Us In could change the relationship between the public and the imprisoned. Like President John F. Kennedy’s Peace Corps, it could inspire a generation of Americans to engage in the betterment of our fragile world.

This is how it would work.

First, the president would state clearly that mass incarceration is a failed system. It created, in the words of Michelle Alexander, author of “The New Jim Crow: Mass Incarceration in the Age of Colorblindness,” a “racial caste system” that has disproportionately punished a generation of young, usually male, people of color. The president must speak to people’s pain, and acknowledge that we imprison too many people for too long, and at a cost to taxpayers of billions of dollars a year.

Because only 10 percent of incarcerated Americans are in federal custody, the president has limited scope for shrinking the prison population. What the president can do is use the office as a bully pulpit to change the criminal justice narrative, and to adopt what “Reimagining Justice,” a report by the Vera Institute of Justice, proposes: a policy of incarceration whose “foundational value” is “human dignity.”

To that end, the president would assemble a diverse group of criminal justice experts — including corrections and law enforcement officials, former inmates and their families, defense lawyers, judges and inmate advocates — to develop a national program to create paths for trained volunteers and professionals to work inside prisons wherever safety allows.

Let Us In must be more than “tourism within walls”; for the volunteers to be able to go inside the walls to dispense their skills and knowledge, serious consideration must be given to training and safety.

Within two years, the organization could be spun off from the government, and a nonprofit corporation would take its place. Imagine former Presidents George Bush and Barack Obama as honorary chairmen. Eventually, the program would be financed by a combination of government grants and nonprofit contributions, much like the Corporation for Public Broadcasting or Americorp’s Vista program.

I’ve already witnessed the power of such programs on a smaller scale. At Green Haven and Fishkill Correctional Facilities in New York, I watched theatrical performances by incarcerated men sponsored by Rehabilitation Through the Arts. At San Quentin State Prison in California, I met with the prison newspaper’s staff and attended a finance class led by a self-taught instructor serving a life sentence. While visiting the Osborne Association’s parenting program at Sing Sing prison in Ossining, N.Y., with a group of family court judges, I witnessed incarcerated men plead for visitation privileges with their children. “When I see you men taking these programs, I know you are serious,” said one judge.

I’ve met graduates and instructors from Bard and Bennington Colleges’ degree programs in prisons. And at my organization, The Marshall Project, two members of our staff received degrees from Mercy College while in prison through the Hudson Link Program for Higher Education in Prison, which provides college education in prison.

Several years ago, I was at San Quentin to participate in a series of TEDx talks. I invited an editor friend who lived nearby. He sat next to an incarcerated man who worked on San Quentin’s magazine, and he invited my friend to help as a volunteer. For the next two years, my friend went twice a week to San Quentin to help the staff publish their magazine. “This was a life-changing experience,” he told me.

As inspiring as these programs may be, they aren’t enough to meet the monumental need. Each year, 3,000 volunteers pass through the doors of San Quentin, in densely populated and liberal Marin County, offering everything from yoga to computer training to psychotherapy classes. But in many prisons around the country, particularly those in remote locales, volunteers can be hard to come by.

Let Us In must not be a substitute for more difficult prison reforms. The bail, sentencing, policing and parole systems still cry out for radical changes, and reform efforts will require a deliberate, state-by-state process.

But, if executed properly, Let Us In would achieve several goals at once.

It will provide tools for the incarcerated to lead healthy, productive lives once they leave prison. It is shameful that they are often released as damaged men and women, with few skills to cope in society. Educational and other programs offer incentives for the incarcerated, which enlightened superintendents will embrace.

And finally, Let Us In would create a generation of prison reform proponents — volunteers who will take their experiences back to their communities, who will vote and who will one day employ the formerly incarcerated when they rejoin their communities.

The civil rights lawyer Bryan Stevenson says there are four things necessary to confront injustice in America: getting close to the issue, changing the narrative, fighting hopelessness and getting uncomfortable.

Let Us In will go a long way toward achieving these goals, and it would hold participating institutions accountable to the citizens who routinely pass through its doors.

It might also make the rest of us a little uncomfortable. And that’s O.K. too.

I hope you remain safe and well, and keep writing and researching!