Statement of Principles Regarding the Trial Penalty 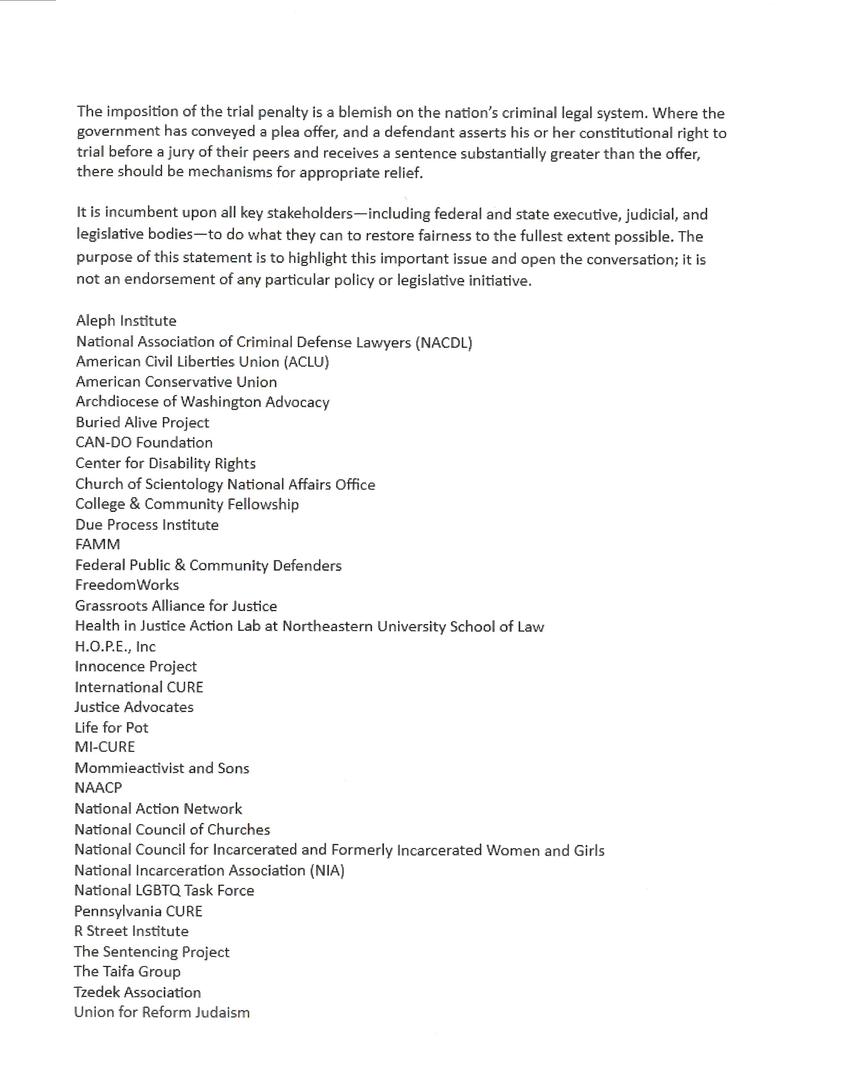 Statement of Principles Regarding the Trial Penalty

The undersigned organizations are concerned about injustices stemming from the prevalence of the "trial penalty" as it relates to criminal cases. As the criminal justice system has exploded in size and scope over the last four decades, the effects of coercive plea bargaining-and its ugly partner, the trial penalty-have led to alarming results. Instead of merely conferring a reasonable benefit on people who accept responsibility and plead guilty, the current system often applies vastly inflated sentences to people who assert their constitutional presumption of innocence and force the government to meet its burden at trial.

The trial penalty is the threat of vastly increased penalties that routinely induce individuals to waive not only the right to trial, but many other fundamental rights as well, such as the right to obtain discovery, time to conduct a thorough investigation, the right to challenge unlawfully obtained evidence, the right to testify and present defense witnesses, and even the right to appeal. In federal courts, the accused face geometrically greater sentences simply for contesting the charges. National Association of Criminal Defense Lawyers, The Trial Penalty: The Sixth Amendment Right to Trial on the verge of Extinction and How to Save It (2018). Unfortunately, this often results in the least culpable defendant receiving the harshest penalty.
Not infrequently, the significant leverage given to prosecutors under the current system causes innocent people to give up their constitutional rights, rather than risk draconian sentences by going to trial. As explained by federal judge Jed Rakoff in his ground-breaking article, Why Innocent People Plead Guilty, it makes perfect sense for someone who has committed no crime whatsoever to accept a government plea offer when presented with an explicit or implicit threat that, if they assert their right to a trial, the charges will be vastly increased and they will be subjected to the risk of a decades-long sentence. Jed S. Rakoff, The New York Review of Books (Nov. 20, 2014).

The trial penalty problem is prevalent at both the state and federal levels. A range of actions is available to redress the injustice of the trial penalty, including legislative reform, prosecutorial practices reform, executive clemency, guidance from the U.S. Sentencing Commission or other state or federal agencies, and judicial reforms to minimize the trial penalty.

The impact of coercive plea practices cannot be overstated. Roughly three percent of criminal cases go to trial today, in contrast to prior periods where roughly twenty percent of criminal cases went to trial by jury. "The vast majority of felony convictions are now the result of plea bargains-some 94 percent at the state level, and some 97 percent at the federal level. Estimates for misdemeanor convictions run even higher." (Emily Yoffe, "Innocence Is Irrelevant: This is the age of the plea bargain-and millions of Americans are suffering the consequences," The Atlantic, September 2017.) The late William J. Stuntz discussed the problem in his 2011 bookThe Collapse of American Criminal Justice, noting that "those who are punished most severely are often those who made the worst deals, not those who committed the worst crimes."

The imposition of the trial penalty is a blemish on the nation's criminal legal system. Where the government has conveyed a plea offer, and a defendant asserts his or her constitutional right to trial before a jury of their peers and receives a sentence substantially greater than the offer, there should be mechanisms for appropriate relief.

It is incumbent upon all key stakeholders including federal and state executive, judicial, and legislative bodies-to do what they can to restore fairness to the fullest extent possible. The purpose of this statement is to highlight this important issue and open the conversation; it is not an endorsement of any particular policy or legislative initiative.

Thanks for writing! I finished the transcription for your post. I am so glad to see you fighting this fight. Plea bargains and trial penalty are stains on this country. I hope that your strong words can make a difference. Too many people have been harmed by this. Good luck.
(scanned reply – view as blog post)
uploaded Jan. 18, 2021.  Original (PDF) 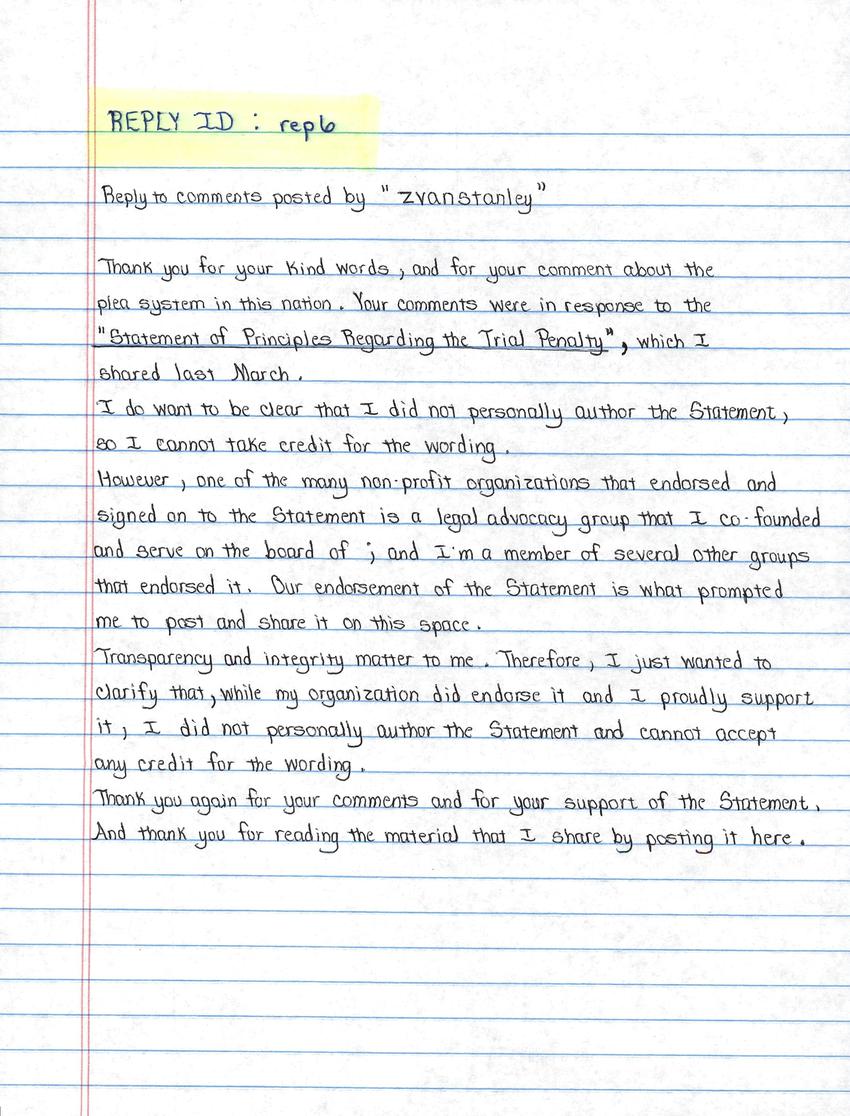