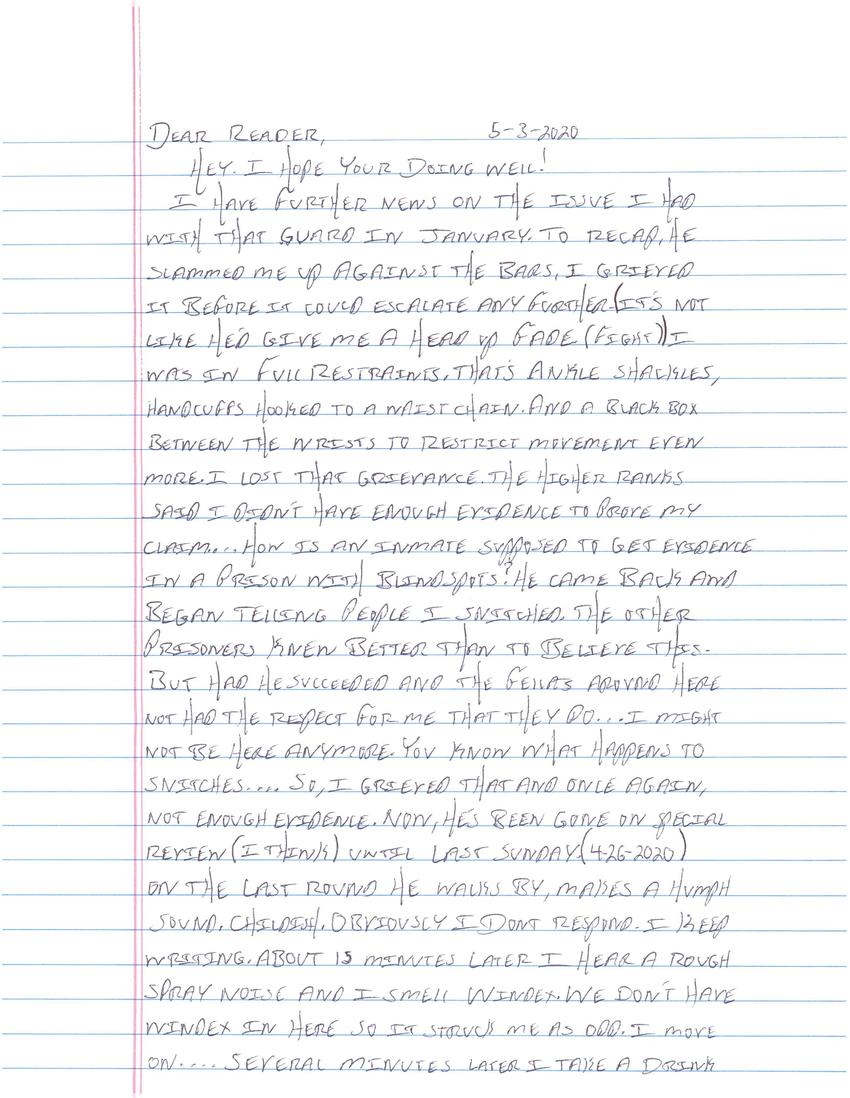 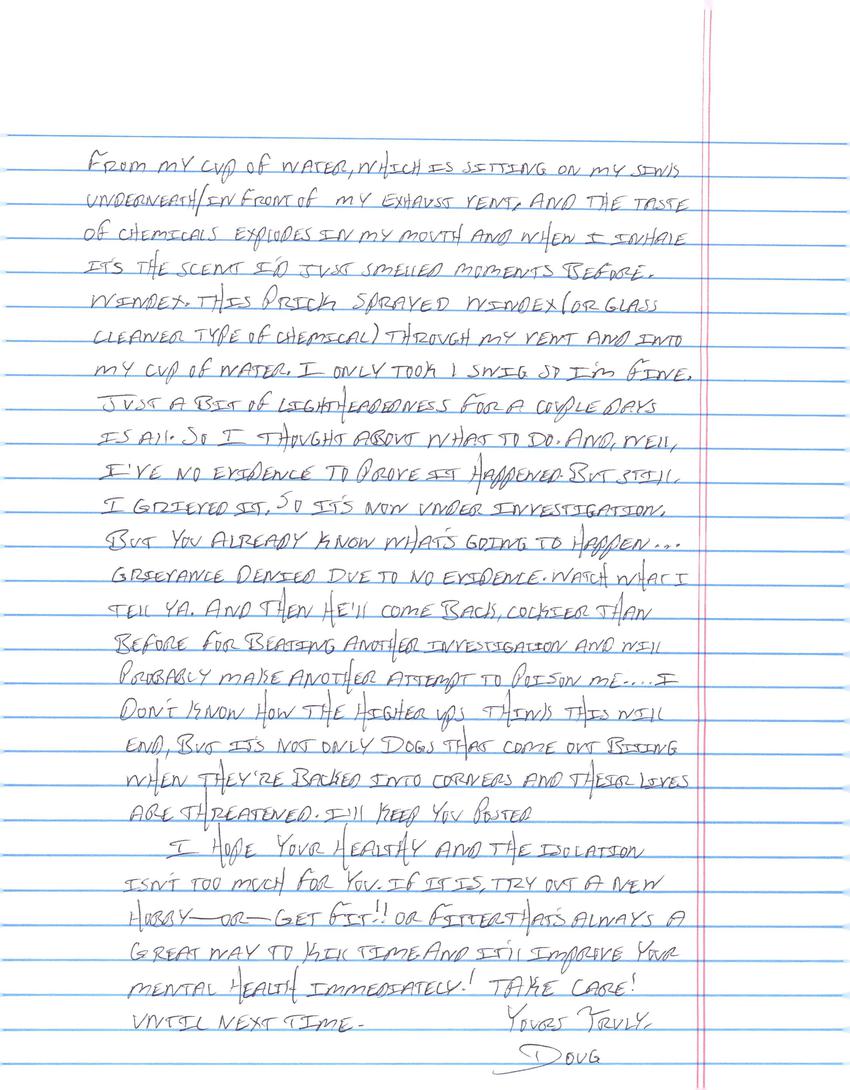 Dear Reader,
Hey. I hope your doing well!
I have further news on the issue I had with that guard in January. To recap, he slammed me up against the bars. I grieved it before it could escalate any further. (It's not like he'd give me a head up fade (fight)) I was in full restraints. That's ankle shackles, handcuffs hooked to a waist chain, and a black box between the wrists to restrict movement even more. I lost that grievance. The higher ranks said I didn't have enough evidence to prove my claim... how is an inmate supposed to get evidence in a prison with blindspots? He came back and began telling people I snitched. The other prisoners knew better than to believe this. But had he succeeded and the fellas around here not had the respect for me that they do... I might not be here anymore. You know what happens to snitches... So, I grieved that once again, not enough evidence. Now, he's been gone on special review (I think) until last Sunday (4-26-2020). On the last round he walks by, made a humph sound. Childish. Obviously I don't respond. I keep writing. About 15 minutes later I hear a rough index in here so it struck me as odd. I move on... several minutes later I take a drink from my cup of water, which is sitting on my sink underneath/in front of my exhaust vent. And the taste of chemicals explodes in my mouth and when I inhale it's the scent I'd just smelled moments before. Windex. This prick sprayed index (or glass cleaner type of chemical) through my vent and into my cup of water. I only took a swig so I'm fine. Just a bit of lightheadedness for a couple of days is all. So I thought about what to do. And, well, I've no evidence to prove it happened. But still, I grieved it. So it's now under investigation. But you already know what's going to happen... grievance denied due to no evidence. What what I tell ya. And then he'll come back, cockier than before for beating another investigation and will probably make another attempt to poison me... I don't know how the higher ups think this will end, but it's not only dogs that come out biting when they're backed into corners and their lives are threatened. I'll keep you posted.

I hope your healthy and the isolation isn't too much for you. If it is, try a new hobby- or- get fit!! Or fitter! That's always a great way to kick time and it'll improve your mental health immediately! Take care! Until next time.

Hi Doug! Thank you for writing, I hope you are well too. I am so sorry that the guard is being immature and rude to you. It shows on your character the way in which you react to his petty attempts. I don't know about you, but I believe in karma- he will learn his lesson when the day comes. Until then, I'm glad that you are keeping healthy and are still writing. I myself have been reading a lot more during quarantine, and sketching. Hoping to teach myself a new language too! Anyway, just wanted you to know that someone is reading your letters and sees your talent in writing. Until next time. (May 10, 2020)
(scanned reply – view as blog post)
uploaded June 11, 2020.  Original (PDF) 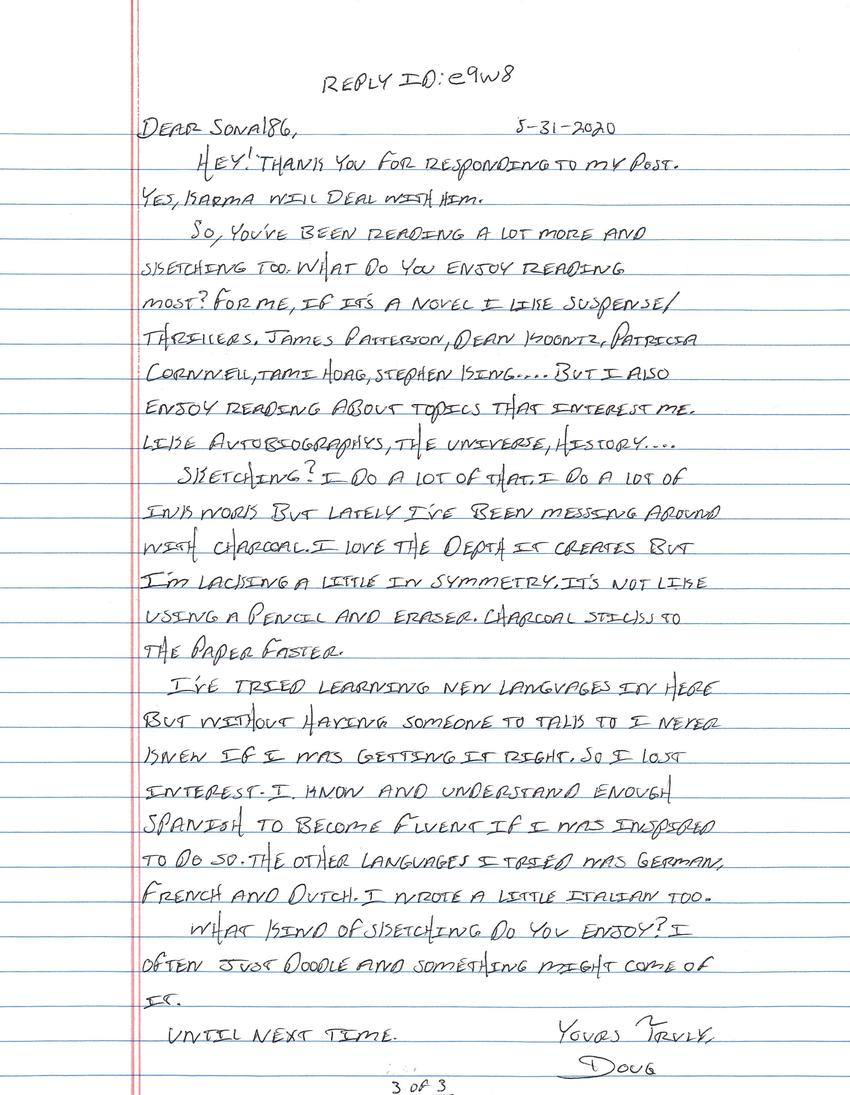 I hope this finds you well. Right now, I'm finishing Cosmicomics by Italo Calvino. I find it hard to focus when I read so it has taken me a while to finish it. But it's a wonderful book consisting of short stories following the journey of a molecule through the history of the world. The writing is absolutely beautiful. I love Calvino, and I've been reading Dickinson and a bit of Poe too! Most of my reading is online, lots of articles and short stories about current events and politics.

That is so cool! I have to admit, I'm not super good at sketching, most of what I do is in pen in my journal. But I love doodling different types of flowers and designs around that.

I've always wanted to learn another language, I took Latin in high school but I wish I took Spanish or French instead, both are much more applicable.

What kind of sketching do you do? I also like to doodle around words and quotes, I find it to be a fun way to release my thoughts on paper. 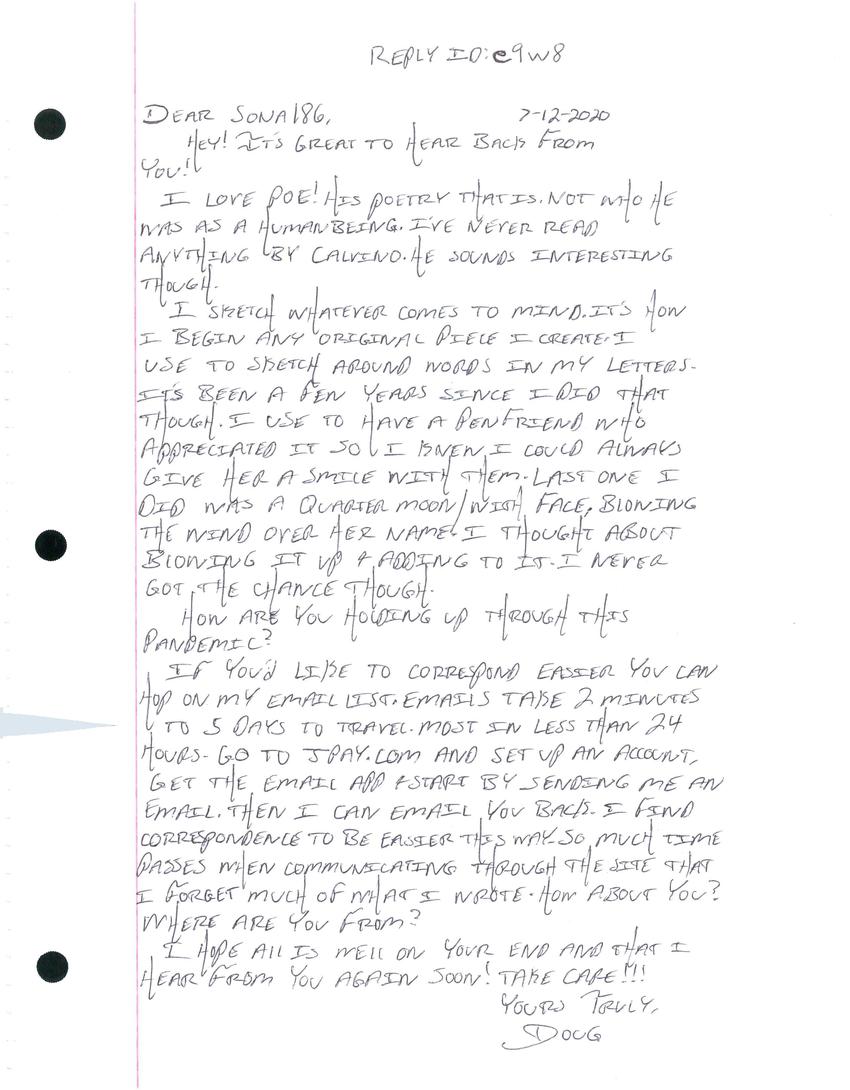