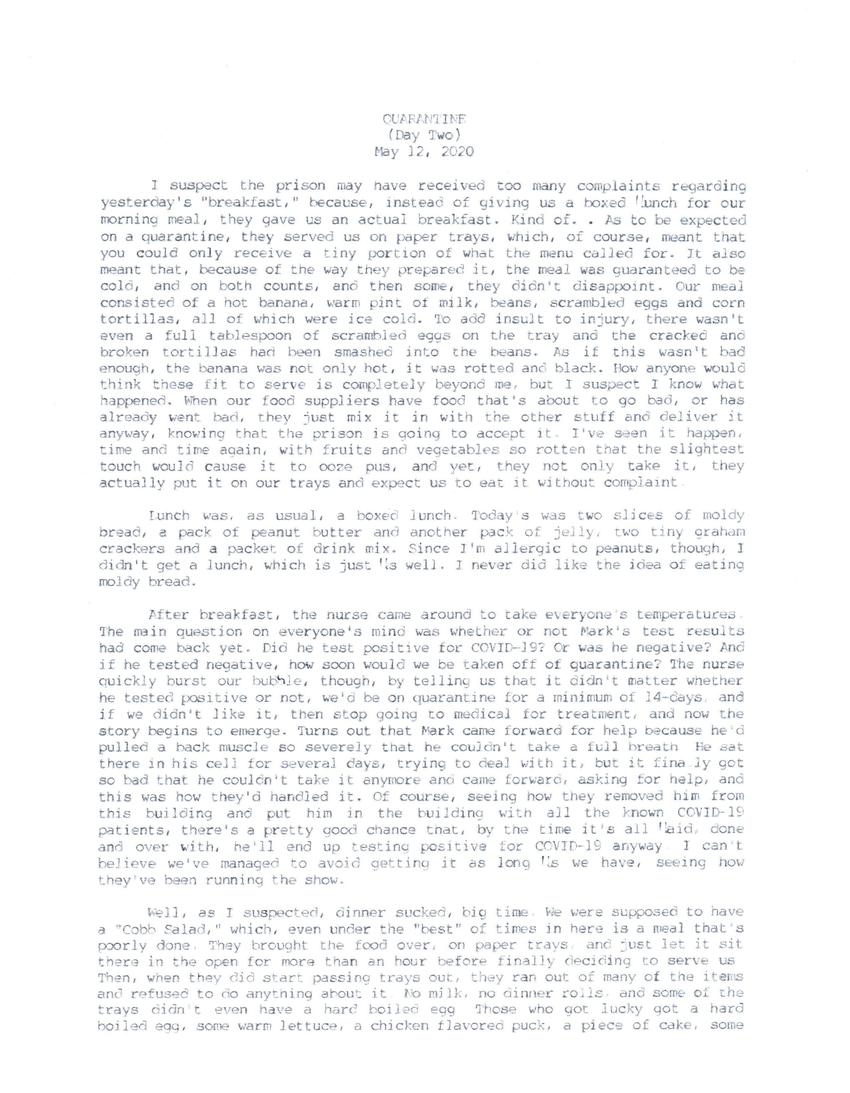 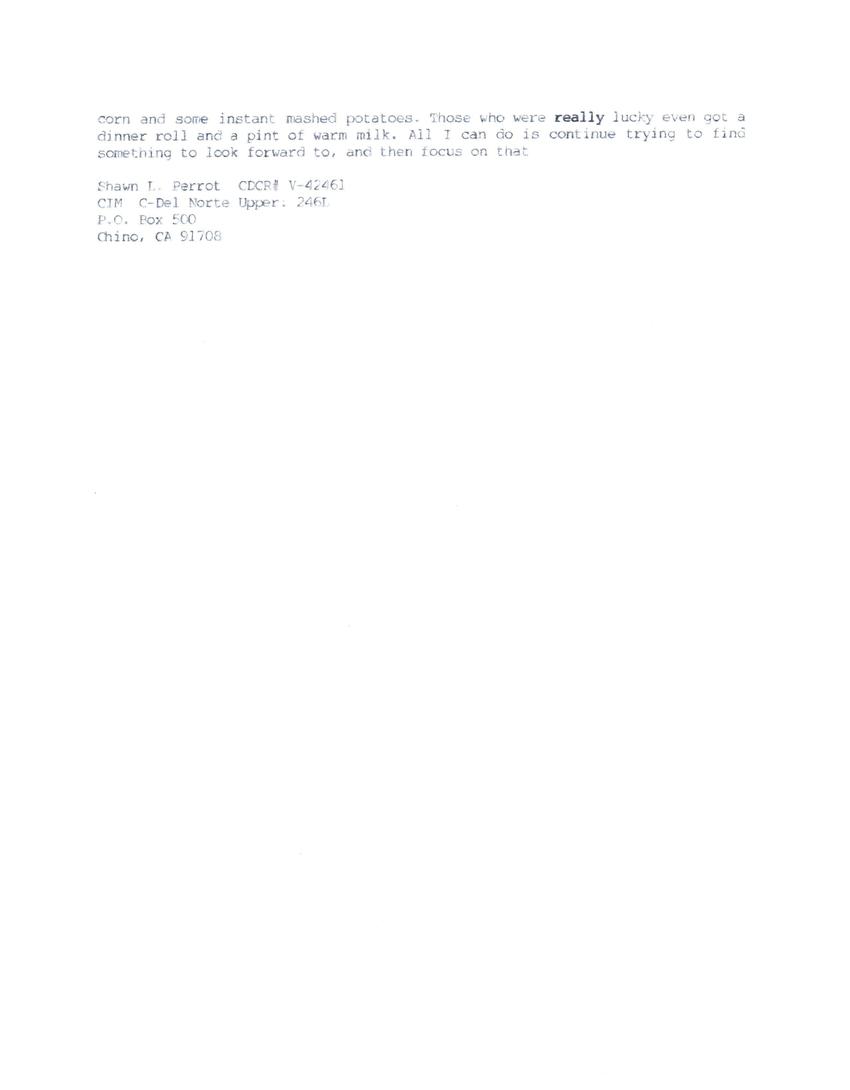 QUARANTINE
(Day Two)
May 12, 2020
I suspect the prison may have received too many complaints regarding yesterday's "breakfast," because, instead of giving us a boxed lunch for our morning meal, they gave us an actual breakfast. Kind of . . As to be expected on a quarantine, they served us on paper trays, which, of course, meant that you could only receive a tiny portion of what the menu called for. It also meant that, because of the way they prepared it, the meal was guaranteed to be cold, and on both counts, and then some, they didn't disappoint. Our meal consisted of a hot banana, warm pint of milk, beans, scrambled eggs, and corn tortillas, all of which were ice cold. To add insult to the injury, there wasn't even a full tablespoon of scrambled eggs on the tray and the cracked and broken tortillas had been smashed into the beans. As if this wasn't bad enough, the banana was not only hot, it was rotted and black. How anyone would think theses fit to serve is completely beyond me, but I suspect I know what happened. When our food suppliers have food that's about to go bad, or has already went bad they just mix it in with the other stuff and deliver it anyway, knowing that the prison is going to accept it. I've seen it happen, time and time again, with fruits and vegetables so rotten that the slightest touch would cause it to ooze pus, and yet, they not only take it, they actually put it on our trays and expect us to eat it without complaint.
Lunch was, as usual, a boxed lunch. Today's was two slices of moldy bread, a pack of peanut butter and another pack of jelly, two tiny graham crackers and a packet of drink mix. Since I'm allergic to peanuts, though, I didn't get a lunch, which is just as well. I never did like the idea of eating moldy bread.
After breakfast, the nurse came around to take everyone's temperature. The main question on everyone's mind was whether or not Mark's test results had came back yet. Did he test positive for COVID-19? Or was he negative? And if he tested negative, how soon would we be taken off of quarantine? The nurse quickly burst our bubble, though, by telling us that it didn't matter whether he tested positive of not, we'd be on quarantine for a minimum of 14-days, and if we didn't like it, then stop going to medical for treatment, and now the story begins to emerge. Turns out that Mark came forward for help because he'd pulled a back muscle so severely that he couldn't take a full breath. He sat there in his cell for several days, trying to deal with it, but it finally got so bad that he couldn't take it anymore and came forward, asking for help, and this was how they'd handle it. Of course, seeing how they removed him from this building and put him in the building with all the known COVID-19 patients, there's a pretty good change that, by the time it's all said, done and over with, he'll end up testing positive for COVID-19 anyway. I can't believe we've managed to avoid getting it as long as we have, seeing how they've been running the show.
Well, as I suspected, dinner sucked, big time. We were supposed to have a "Cobb Salad," which, even under the "best" of times in here is a meal that's poorly done. They brought the food over, on paper trays and just let it sit there in the open for more than an hour before finally decided to serve us. Then, when they did start passing trays out, they ran out of many of the items and refused to do anything about it. No milk, no dinner rolls and some of the trays didn't even have a hard boiled egg. Those who got lucky got a hard boiled egg, some warm lettuce, a chicken flavored puck, a piece of cake, some corn and some instant mashed potatoes. Those who were really lucky even got a dinner roll and a pint of warm milk. All I can do is continue trying to find something to look forward to, and then focuses on that.
Shawn L. Perrot CDCR # V-42461
CIM C-Del Norte Upper 246L
P.O. Boc 500
Chino, CA 91708