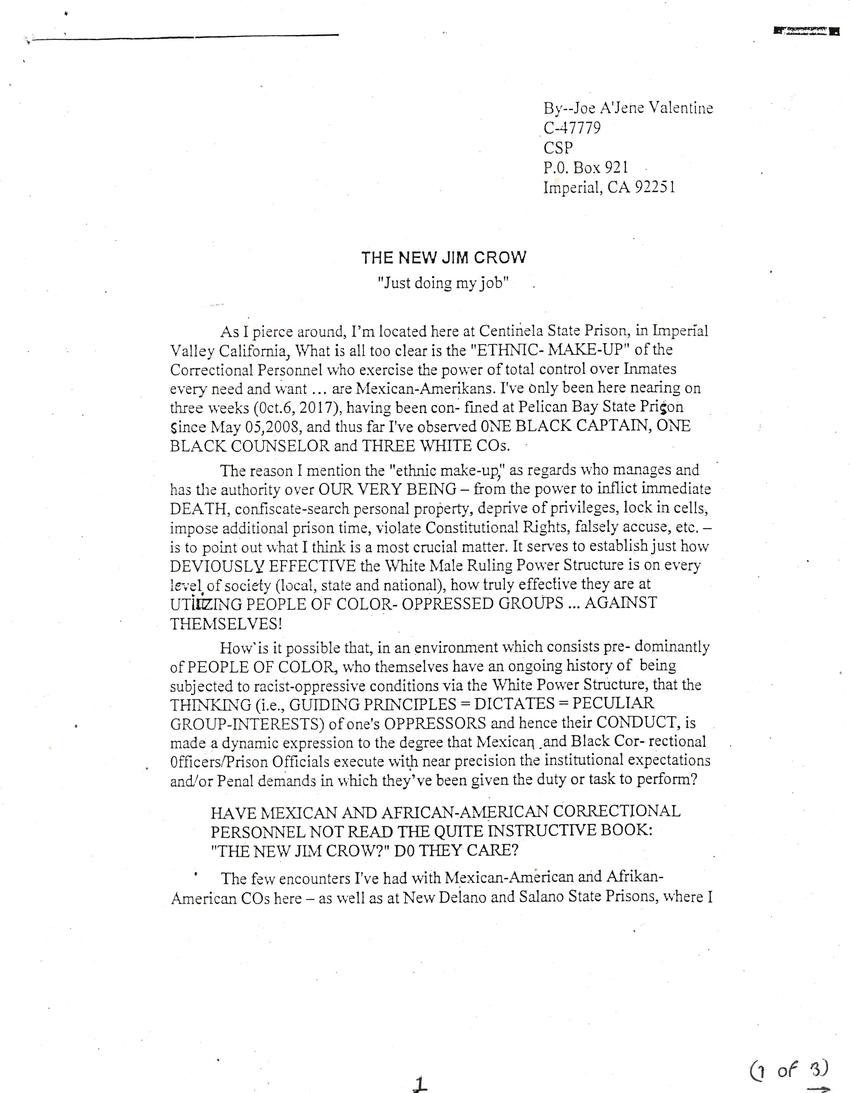 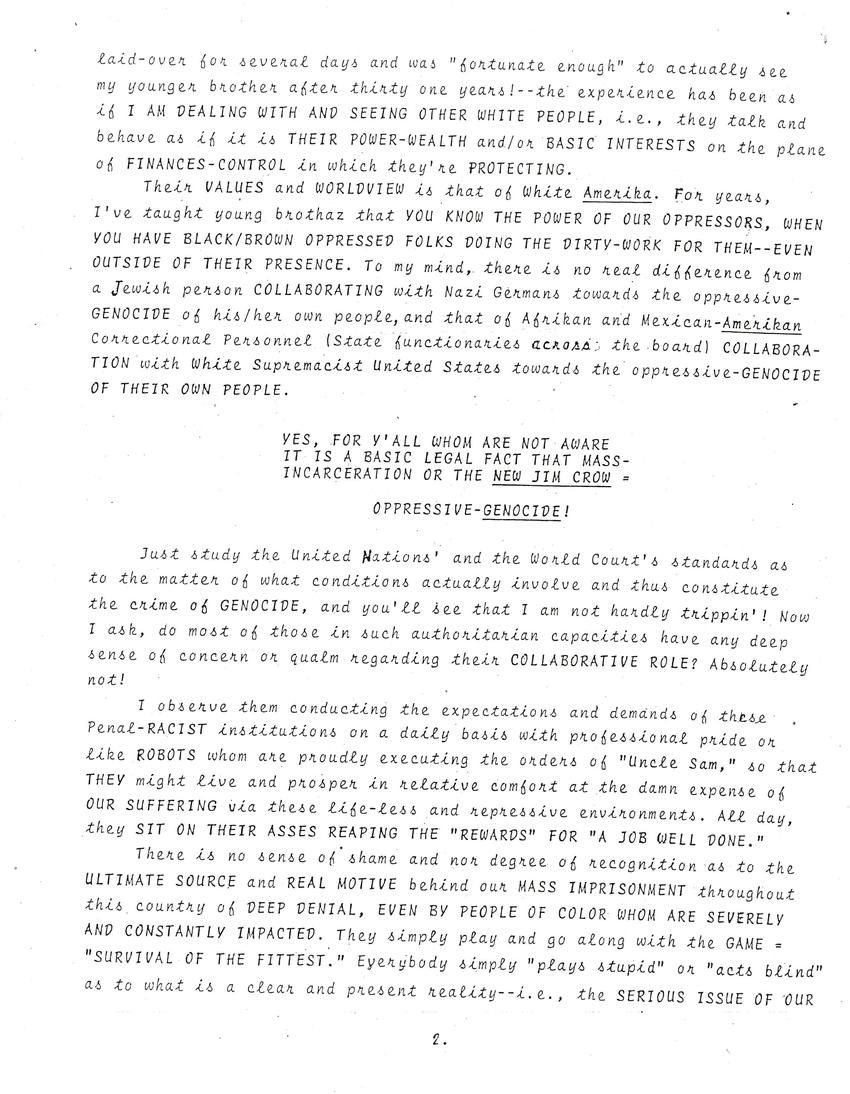 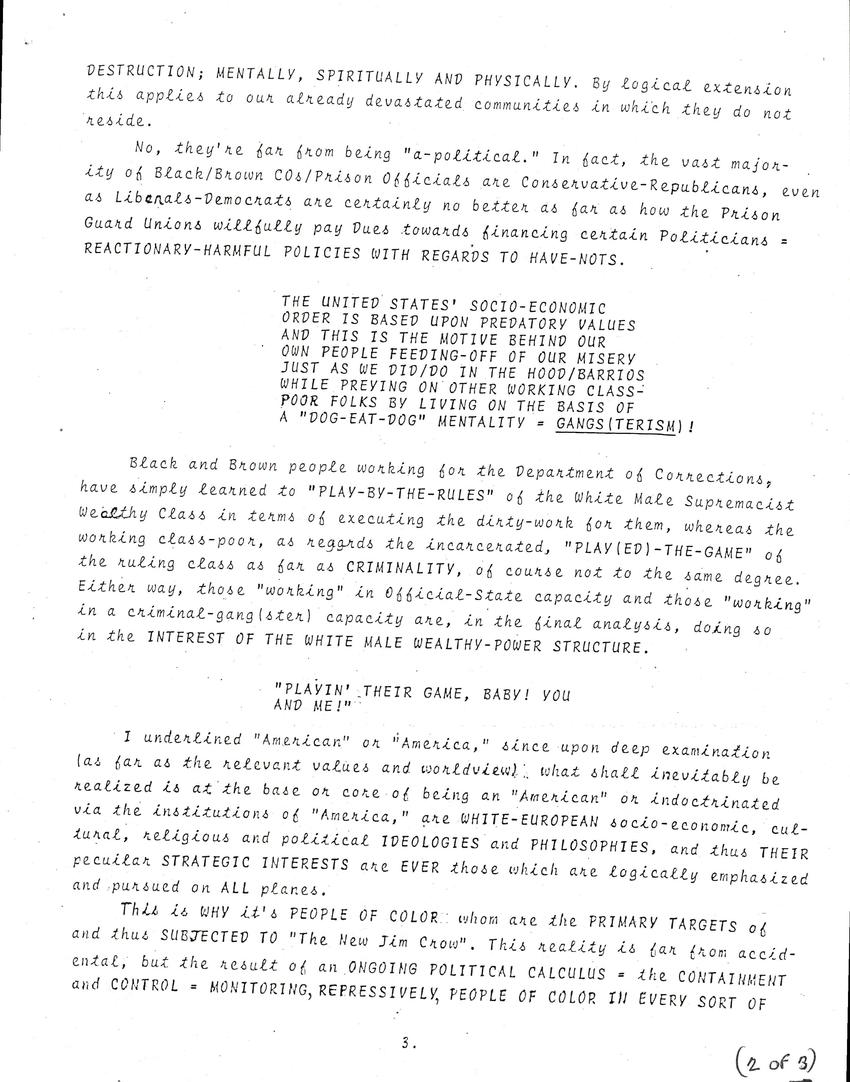 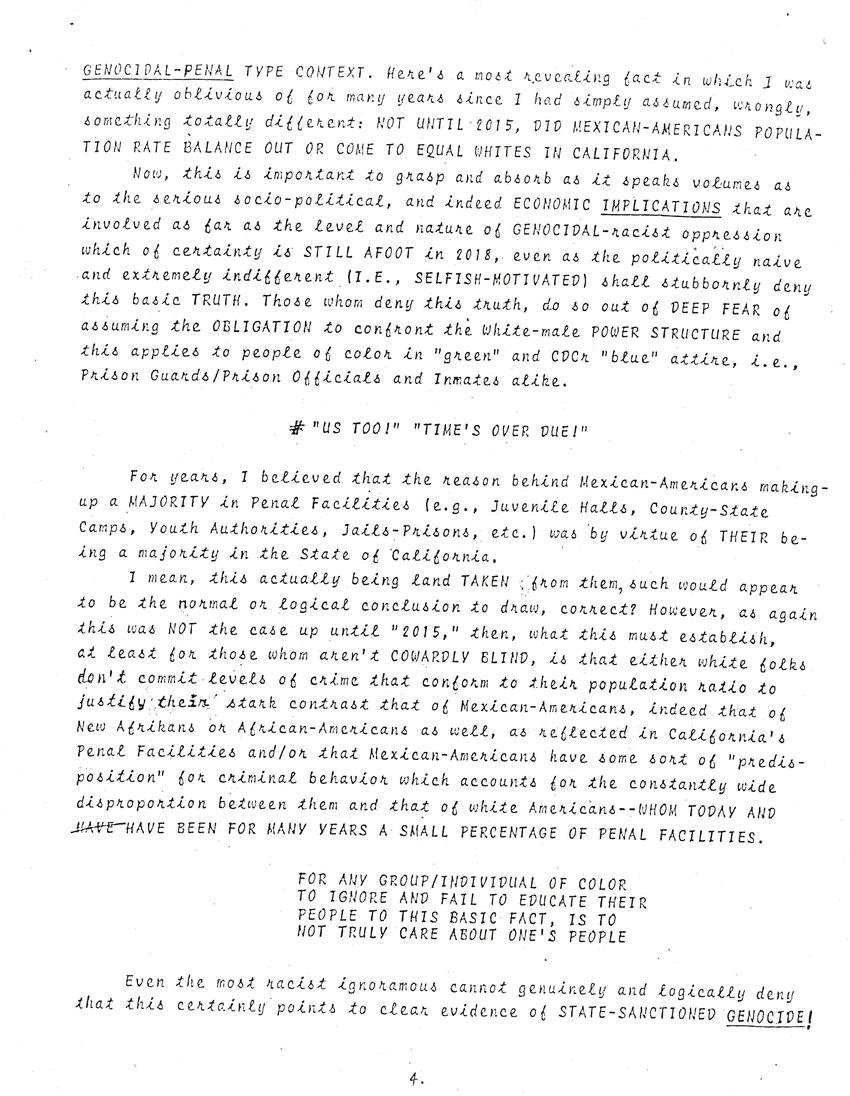 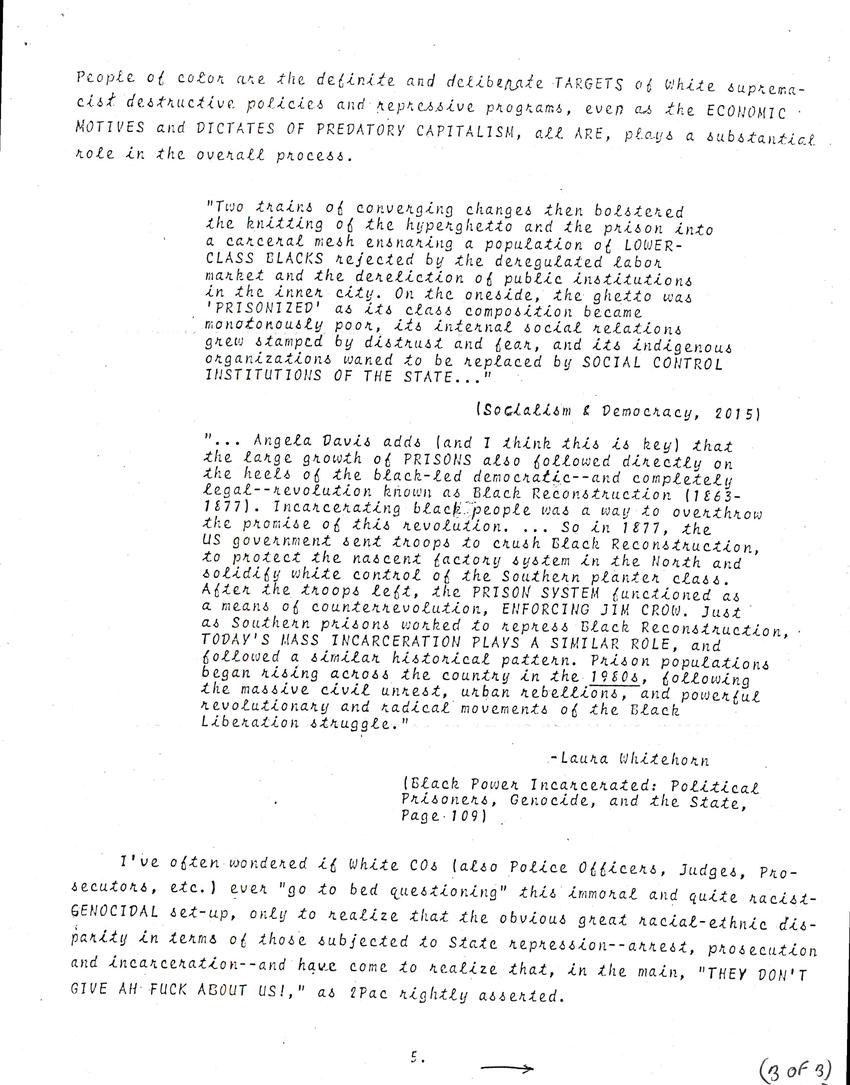 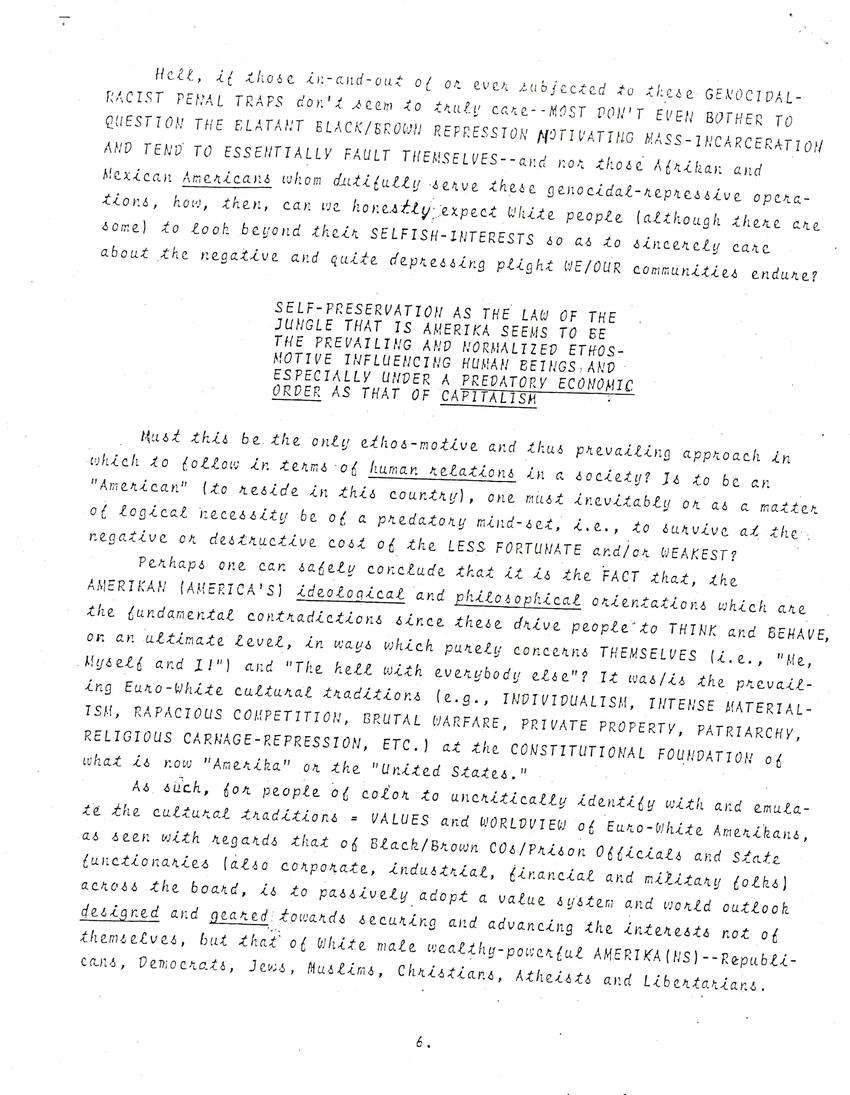 As I pierce around, I'm located here in Centinela State Prison, in Imperial Valley California, What is all too clear is the "ETHNIC- MAKE-UP" of the Correctional Personnel who exercise the power of total control over Inmates every need and want ... are Mexican-Americans. I've only been here nearing on three weeks (Oct.6,2017), having been confined at Pelican Bay State Prison since May 05, 2008, and thus far I've observed ONE BLACK CAPTAIN, ONE BLACK COUNSELOR, and THREE WHITE COs.

The reason I mention the "ethnic make-up," as regards who manages and has the authority over OUR VERY BEING -- from the power to inflict immediate DEATH, confiscate-search personal property, deprive of privileges, lock in cells, impose additional prison time, violate Constitutional Rights, falsely accuse, etc. -- is to point out what I think is a most crucial matter. It serves to establish just how DEVIOUSLY EFFECTIVE the White Male Ruling Power Structure is on every level of society (local, state, and national), how truly effective they are at UTILIZING PEOPLE OF COLOR- OPPRESSED GROUPS ... AGAINST THEMSELVES!

How is it possible that, in an environment which consists predominantly of PEOPLE OF COLOR, who themselves have an ongoing history of being subjected to racist-oppressive conditions via the White Power Structure, that the THINKING (i.e., GUIDING PRINCIPLES = DICTATES = PECULIAR GROUP-INTERESTS) of one's OPPRESSORS and hence their CONDUCT, is made a dynamic expression to the degree that Mexican and Black Correctional Officers/Prison Officials execute with near precision the institutional expectations and/or Penal demands in which they've been given the duty or task to perform?

HAVE MEXICAN AND AFRICAN-AMERICAN CORRECTIONAL PERSONNEL NOT READ THE QUITE INSTRUCTIVE BOOK: "THE NEW JIM CROW?" DO THEY CARE?

The few encounters I've had with Mexican-American and Afrikan-American COs here -- as well as at New Delano and Salano State Prisons, where I laid over for several days and was "fortunate" enough" to actually see my younger brother after thirty-one years!--the experience has been as if I AM DEALING WITH AND SEEING OTHER WHITE PEOPLE, i.e. they talk and behave as if it is THEIR POWER-WEALTH and/or BASIC INTERESTS on the place of FINANCES-CONTROL in which they're PROTECTING.

Their VALUES and WORLDVIEW is that of WHite Amerika. For years, I've taught young brothaz that YOU KNOW THE POWER OF OUR OPPRESSORS, WHEN YOU HAVE BLACK/BROWN OPPRESSED FOLKS DOING THE DIRTY-WORK FOR THEM--EVEN OUTSIDE OF THEIR PRESENCE. To my mind, there is no real difference from a Jewish person COLLABORATING with Nazi Germans towards the oppressive-GENOCIDE of his/her own people, and that of Afrikan and Mexican-Amerikan Correctional Personnel (State functionaries across the board) COLLABORATION with White Supremacist United States towards the oppressive-GENOCIDE OF THEIR OWN PEOPLE.

YES, FOR Y'ALL WHOM ARE NOT AWARE IT IS A BASIC LEGAL FACT THAT MASS-INCARCERATION OR THE NEW JIM CROW = OPPRESIVE-GENOCIDE!

Just study the United Nations' and the World Court's standards as to the matter of what conditions actually involve and thus constitute the crime of GENOCIDE, and you'll see that I am hardly trippin'! Now I ask, do most of those in such authoritarian capacities have any deep sense of concern or qualm regarding their COLLABORATIVE ROLE? Absolutely not!

I observe them conducting the expectations and demands of these Penal-RACIST institutions on a daily basis with professional pride or like ROBOTS who are proudly executing the orders of "Uncle Sam," so that THEY might live and prosper in relative comfort at the damn expense of OUR SUFFERING via these life-less and repressive environments. All-day, they SIT ON THEIR ASSES REAPING THE "REWARDS" FOR "A JOB WELL DONE."

There is no sense of shame and nor the degree of recognition as to the ULTIMATE SOURCE and REAL MOTIVE behind our MASS IMPRISONMENT throughout this country of DEEP DENIAL, EVEN BY PEOPLE OF COLOR WHOM ARE SEVERELY AND CONSTANTLY IMPACTED. They simply play and go along with the GAME = "SURVIVAL OF THE FITTEST." Everybody simply "plays stupid" or "acts blind" as to what is a clear and present reality--i.e., the SERIOUS ISSUE OF OUR DESTRUCTION; MENTALLY, SPIRITUALLY AND PHYSICALLY. By logical extension, this applies to our already devastated communities in which they do not reside.

No, they're far from being "a-political." In fact, the vast majority of Black/Brown COs/Prison Officials are Conservative-Republicans, even as Liberal-Democrats are certainly no better as far as how the Prison Unions willfully pay Dues towards financing certain Politicians = REACTIONARY-HARMFUL POLICIES WITH REGARDS TO HAVE-NOTS.

THE UNITED STATES' SOCIO-ECONOMIC ORDER IS BASED UPON PREDATORY VALUES AND THIS IS THE MOTIVE BEHIND OUR OWN PEOPLE FEEDING-OFF OF OUR MISERY JUST AS WE DID/DO IN THE HOOD/BARRIOS WHILE PREYING ON OTHER WORKING CLASS-POOR FOLKS BY LIVING ON THE BASIS OF A "DOG-EAT-DOG" MENTALITY = GANGS(TERISM)!

Black and Brown people working for the Department of Corrections, have simply learned to "PLAY-BY-THE-RULES" of the White Male Supremacist Wealthy Class in terms of executing the dirty-work for them, whereas the working class-poor, as regards the incarcerated, "PLAY(ED)-THE-GAME" of the ruling class as far as CRIMINALITY, of course not to the same degree. Either way, those "working" in Official-State capacity and those "working" in a criminal-gang(ster) capacity are, in the final analysis, doing so in the INTEREST OF THE WHITE MALE WEALTHY-POWER STRUCTURE.

I underlined "American" or "America," since upon deep examination (as far as the relevant values and worldview) what shall inevitably be realized is at the base or core of being an "American" or indoctrinated via the institutions of "America." are WHITE-EUROPEAN socio-economic, cultural, religious, and political IDEOLOGIES and PHILOSOPHIES, and thus THEIR peculiar STRATEGIC INTERESTS are EVER those which are logically emphasized and pursued on ALL planes.
This is HWY it's PEOPLE OF COLOR whom are the PRIMARY TARGETS of and thus SUBJECTED TO "The New Jim Crow". This reality is far from accidental, but the result of an ONGOING POLITICAL CALCULUS. the CONTAINMENT and CONTROL = MONITORING, REPRESSIVELY, PEOPLE OF COLOR IN EVERY SORT OF GENOCIDAL-PENAL TYPE CONTEXT. Here's a most revealing fact in which I was actually oblivious of for many years since I had simply assumed, wrongly, something totally different: NOT UNTIL 2015, DID MEXICAN-AMERICANS POPULATION RATE BALANCE OUT OR COME TO EQUAL WHITES IN CALIFORNIA.
Now, this is important to grasp and absorb as it speaks volumes as to the serious socio-political, and indeed ECONOMIC IMPLICATIONS that are involved as far as the level and nature of GENOCIDAL-racist oppression which of certain is STILL AFOOT in 2018, even as the politically naive and extremely indifferent (I.E., SELFISH-MOTIVATED) shall stubbornly deny this basic TRUTH. Those whom deny this truth, do so out of DEEP FEAR of assuming the OBLIGATION to confront the White-male POWER STRUCTURE and this applies to people of color in "green" and CDC "blue" attire. i.e, Prison Guards/Prison Officials and Inmates alike.

For years, I believed that the reason behind Mexican-Americans making up a MAJORITY in Penal Facilities (e.g., Juvenile Halls, County-State Camps, Youth Authorities, Jail-Prisons, etc.) was by virtue of THEIR being a majority in the State of California
I mean, this actually being land TAKEN from them, such would appear to be the normal or logical conclusion to draw, correct? However, as again this was NOT the case up until "2015," then, what this must establish at least for those whom aren't COWARDLY BLIND, is that either white folks don't commit levels of crime that conform to their population ratio to justify their stark contrast that of Mexican-Americans, indeed that of New Afrikans on African-Americans as well, as reflected in California's Penal Facilities and/or that Mexican-Americans have some sort of "predisposition" for criminal behavior which accounts for the constantly wide disproportion between them and that of white Americans--WHOM TODAY AND HAVE BEEN FOR MANY YEARS A SMALL PERCENTAGE OF PENAL FACILITIES.

FOR ANY GROUP/INDIVIDUAL OF COLOR TO IGNORE AND FAIL TO EDUCATE THEIR PEOPLE TO THIS BASIC FACT, IS TO NOT TRULY CARE ABOUT ONE'S PEOPLE

Even the most racist ignoramus cannot genuinely and logically deny that this certainly points to clean evidence of STATE-SANCTIONED GENOCIDE!

People of color are the definite and deliberate TARGETS of White supremacist destructive policies and repressive programs, even as the ECONOMIC MOTIVES and DICTATES OF PREDATORY CAPITALISM all ARE, plays a substantial role in the overall process.

"Two trains of converging changes then bolstered the knitting of the hyperghetto and the prison into a carceral mesh of ensnaring a population of LOWER CLASS BLACKS rejected by the deregulated labor market and the dereliction of public institutions in the inner city. On the inside, the ghetto was 'PRISONIZED' as its class composition became monotonously poor, its internal social relations grew stamped by distrust and fear, and its indigenous organizations waned to be replaced by SOCIAL CONTROL INSTITUTIONS OF THE STATE..."
(Socialism & Democracy 2015)

"...Angela Davis adds (and I think this is key) that the large growth of PRISONS also followed directly on the heels of the black-led democratic--and completely legal--revolution known as Black Reconstruction (1863-1877). Incarcerating black people was a way to overthrow the promise of this revolution. ... So in 1877, the US government sent troops to crush Black Reconstruction, to protect the nascent factory system in the North and solidify white control of the Southern planter class. After the troops left, the PRISON SYSTEM, functioned as a means of counterrevolution, ENFORCING JIM CROW. Just as Southern prisons worked to repress Black Reconstruction, TODAY'S MASS INCARCERATION PLAYS A SIMILAR ROLE, and followed a similar historical pattern. Prison populations began rising across the country in the 1980s, following the massive civil unrest, urban rebellions, and powerful revolutionary and radical movements of the Black Liberation struggle."
-Laura Whitehorn

I've often wondered if White COs (also Police Officers, Judges, Prosecutors, etc.) even "go to bed questioning" this immoral and quite racist GENOCIDAL set-up, only to realize that the obvious great racial-ethnic disparity in terms of those subjected to state repression--arrest, prosecution and incarceration--and have come to realize that in the main, "THEY DON'T GIVE AH FUCK ABOUT US!," as 2Pac nightly asserted.
Hell, if those in-and-out of or even subjected to these GENOCIDAL-RACIST PENAL TRAPS don't seem to truly care--MOST DON;T EVEN BOTHER TO QUESTION THE BLATANT BLACK/BROWN REPRESSION MOTIVATING MASS-INCARCERATION AND TEND TO ESSENTIALLY CAULT THEMSELVES00 and nor those Afrikan and Mexican Americans whom dutifully serve these genocidal-repressive operations, how, then, can we honestly expect White people (although there are some) to look beyond their SELFISH-INTERESTS so as to sincerely care about the negative and quite depressing plight WE/OUR communities endure?

Must this be the only ethos-motive and thus prevailing approach in which to follow in terms of human relations in a society? Is to be an "American" (to reside in this country), one must inevitably on as a matter of logical necessity be of a predatory mind-set, i.e., to survive at the negative on destructive cost of the LESS FORTUNATE and/or WEAKEST?
Perhaps one can safely conclude that it is the FACT that, the AMERIKAN (AMERICA'S) ideological and philosophical orientations which are the fundamental contradictions since these drive people to THINK and BEHAVE, on an ultimate level, in ways which purely concerns THEMSELVES (i.e., "Me, Myself and I!") and "The hell with everybody else"? It was/is the prevailing Euro-White cultural traditions (e.g., INDIVIDUALISM, INTENSE MATERIALISM, RAPACIOUS COMPETITION, BRUTAL WARFARE, PRIVATE PROPERTY, PATRIARCHY, RELIGIOUS CARNAGE-REPRESSION, ETC.) at the CONSTITUTIONAL FOUNDATION of what is now "Amerika" or the "United States."
As such, for people of color to uncritically identify with and emulate the cultural traditions = VALUES and WORLDVIEW of Euro-Whtie Amerikans, as seen with regards that of Black/Brown COs/Prison Officials and State functionaries (also corporate industrial, financial and military folks) across the board, is to passively adopt a value system and world outlook designed and geared towards securing and advancing the interests not of themselves, but that of White male wealthy-powerful AMERIK(NS) --Republicans, Democrats, Jews, Muslims, Christians, Atheists and Libertarians.