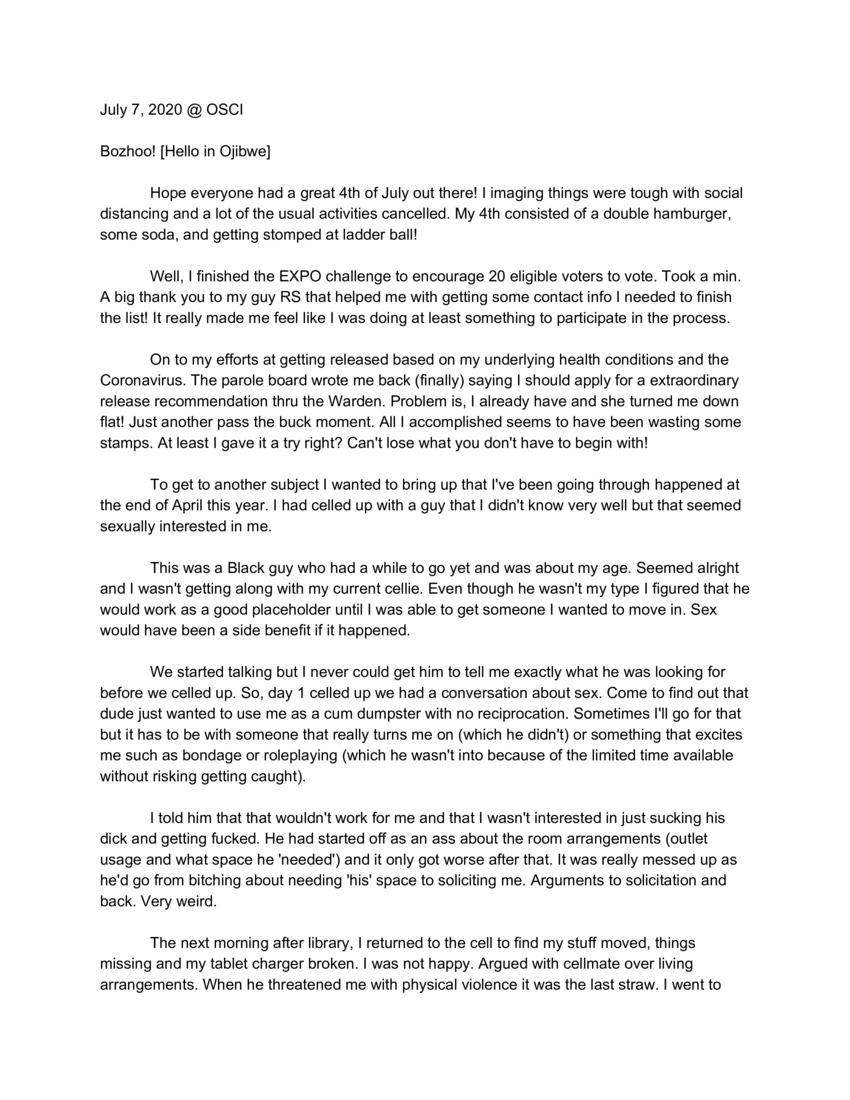 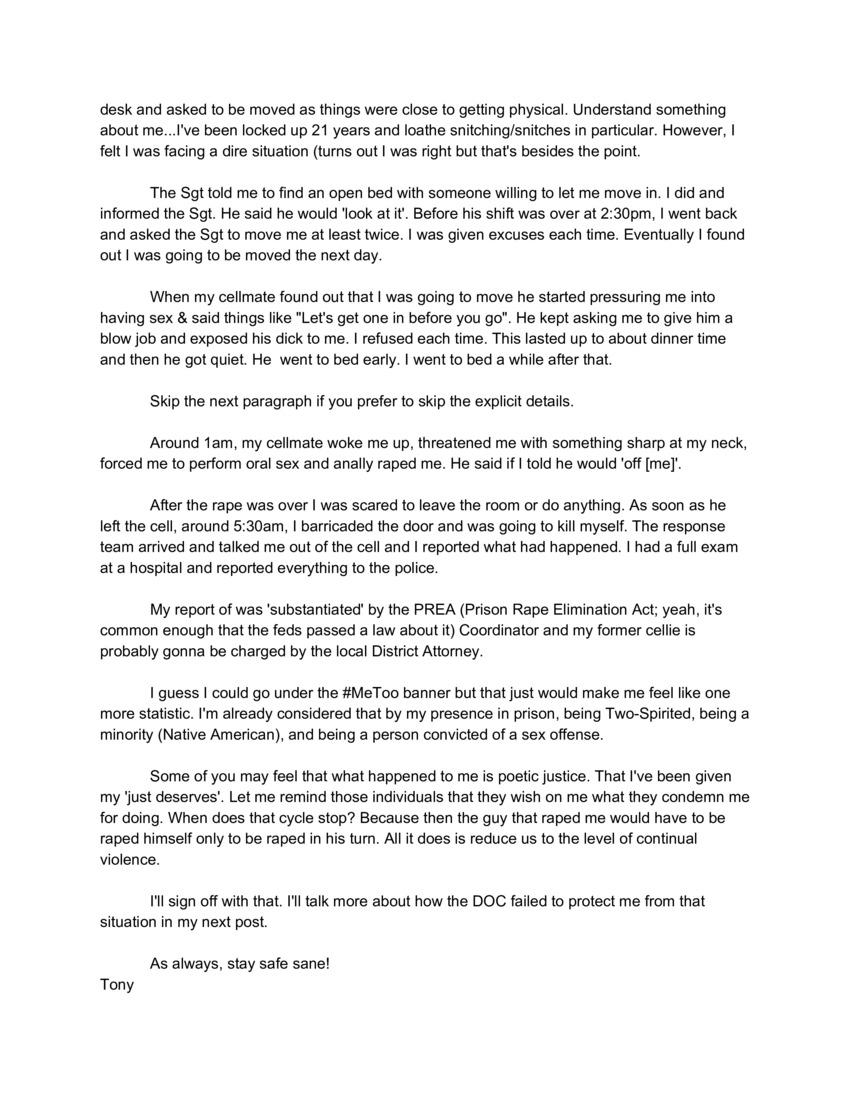 Hope everyone had a great 4th of July out there! I imaging things were tough with social distancing and a lot of the usual activities cancelled. My 4th consisted of a double hamburger, some soda, and getting stomped at ladder ball!

Well, I finished the EXPO challenge to encourage 20 eligible voters to vote. Took a min. A big thank you to my guy RS that helped me with getting some contact info I needed to finish the list! It really made me feel like I was doing at least something to participate in the process.

On to my efforts at getting released based on my underlying health conditions and the Coronavirus. The parole board wrote me back (finally) saying I should apply for an extraordinary release recommendation thru the Warden. Problem is, I already have and she turned me down flat! Just another pass the buck moment. All I accomplished seems to have been wasting some stamps. At least I gave it a try, right? Can't lose what you don't have to begin with!

To get to another subject, I wanted to bring up that I've been going through happened at the end of April this year. I had celled up with a guy that I didn't know very well, but that seemed sexually interested in me.

This was a Black guy who had a while to go yet and was about my age. Seemed alright and I wasn't getting along with my current cellie. Even though he wasn't my type, I figured that he would work as a good placeholder until I was able to get someone I wanted to move in. Sex would have been a side benefit if it happened.

I told him that that wouldn't work for me and that I wasn't interested in just sucking his dick and getting fucked. He had started off as an ass about the room arrangements (outlet usage and what space he 'needed') and it only got worse after that. It was really messed up as he'd go from bitching about needing 'his' space to soliciting me. Arguments to solicitation and back. Very weird.

The next morning after library, I returned to the cell to find my stuff moved, things missing and my tablet charger broken. I was not happy. Argued with cellmate over living arrangements. When he threatened me with physical violence, it was the last straw. I went to desk and asked to be moved as things were close to getting physical. Understand something about me...I've been locked up 21 years and loathe snitching/snitches in particular. However, I felt I was facing a dire situation (turns out I was right, but that's besides the point.)

The Sgt. told me to find an open bed with someone willing to let me move in. I did and informed the Sgt. He said he would 'look at it'. Before his shift was over at 2:30 pm, I went back and asked the Sgt. to move me at least twice. I was given excuses each time. Eventually, I found out I was going to be moved the next day.

When my cellmate found out that I was going to move, he started pressuring me into having sex & said things like, "Let's get one in before you go". He kept asking me to give him a blow job and exposed his dick to me. I refused each time. This lasted up to about dinner time and then he got quiet. He went to bed early. I went to bed a while after that.

Skip the next paragraph if you prefer to skip the explicit details.

Around 1 am, my cellmate woke me up, threatened me with something sharp at my neck, forced me to perform oral sex, and anally raped me. He said if I told, he would 'off [me]'.

After the rape was over, I was scared to leave the room or do anything. As soon as he left the cell, around 5:30 am, I barricaded the door and was going to kill myself. The response team arrived and talked me out of the cell and I reported what had happened. I had a full exam at a hospital and reported everything to the police.

My report of was 'substantiated' by the PREA (Prison Rape Elimination Act; yeah, it's common enough that the feds passed a law about it) Coordinator and my former cellie is probably gonna be charged by the local District Attorney.

I guess I could go under the #MeToo banner, but that just would make me feel like one more statistic. I'm already considered that by my presence in prison, being Two-Spirited, being a minority (Native American), and being a person convicted of a sex offense.

Some of you may feel that what happened to me was poetic justice. That I've been given my 'just deserves'. Let me remind those individuals that they wish on me what they condemn me for doing. When does that cycle stop? Because then the guy that raped me would have to be raped himself only to be raped in his turn. All it does is reduce us to the level of continual violence.

I'll sign off with that. I'll talk more about how the DOC failed to protect me from that situation in my next post.

Hello Tony.
Why would a Native American celebrate Independence Day? Am I missing something here? I’m not a yank myself, so I’m not up to speed on your customs. But I would have thought that Native Americans would have dismissed. The forth of July, on the grounds you were invaded and the invaders tried to wipe you all out?
I’m sorry to read what happened to you. This bullshit that people use to silence others, the whole snitching thing is bogus. You may as well say that every single person on the planet who stands up in court to give evidence is, by virtue of speaking their truth, ‘snitching’. People who label others snitches, have just found a very useful vehicle for masking their own transgressions and crimes. I’ve considered in the past, that perhaps being gay in prison might have some advantages, in that you might encounter another person to have a relationship with. But I was clearly wrong. It makes you vunerable and in a way other male inmates clearly are not. It’s almost reversed sexism, like myself being a female and being vunerable to male attack, or unwanted attention at the very least. There’s no way on earth you should have had to put up with this particular cellie, the prison staff who failed to act should be sued. Hopefully this ex cell mate of yours will be kept away from other vunerable prisoners and you can congratulate yourself for potentially preventing the assaults of other prisoners in the future. Someone needed to speak up. Silence is deadly.
All the best.
T
Thanks for writing! I finished the transcription for your post. 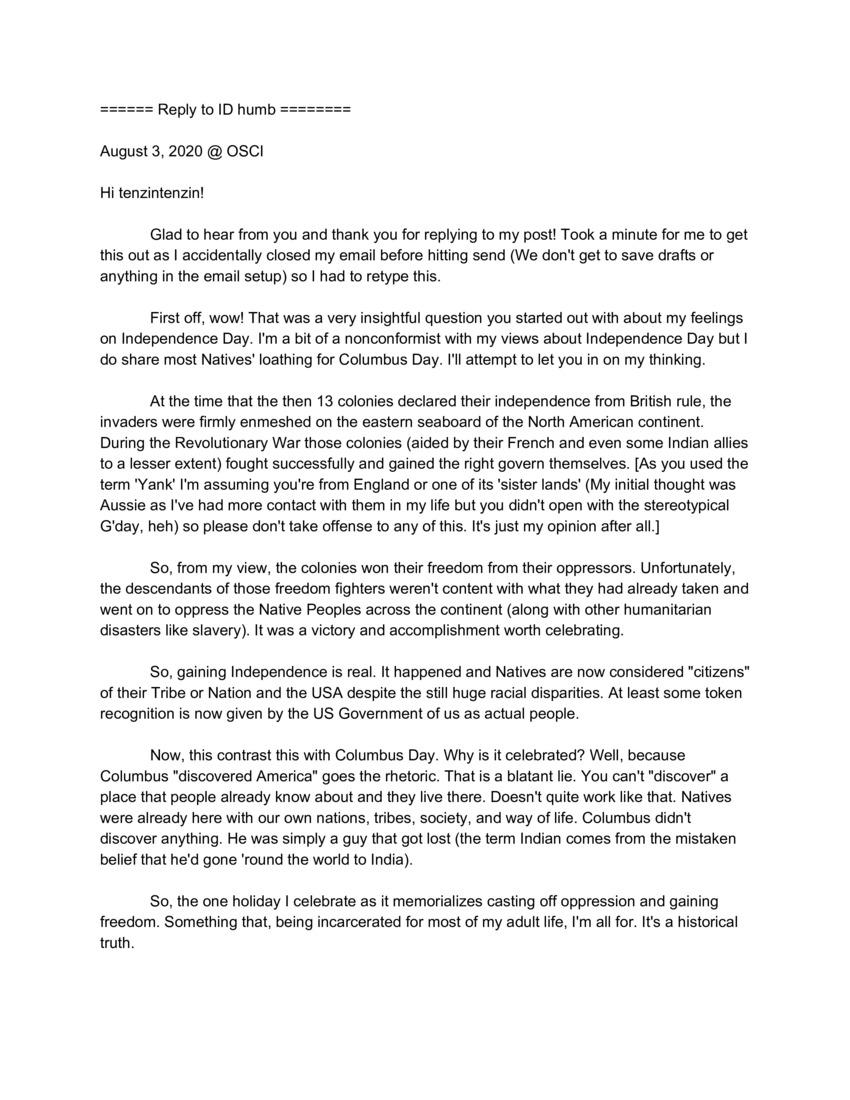 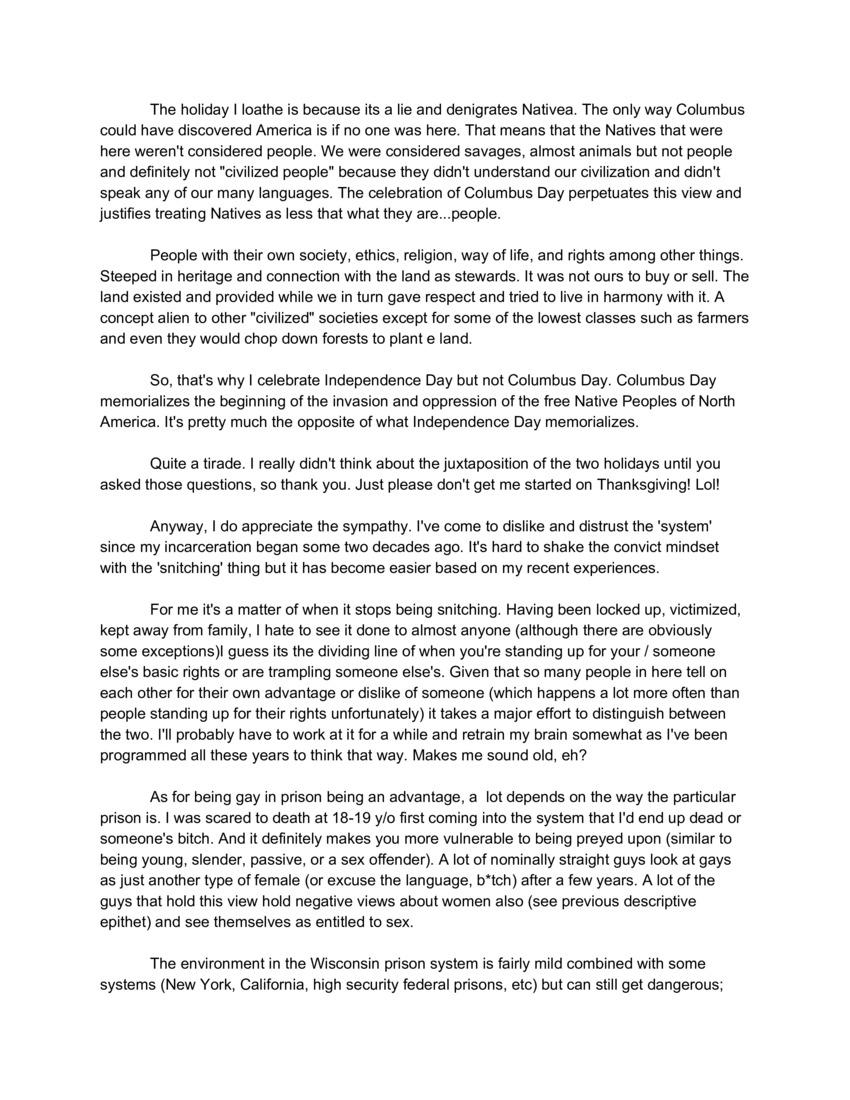 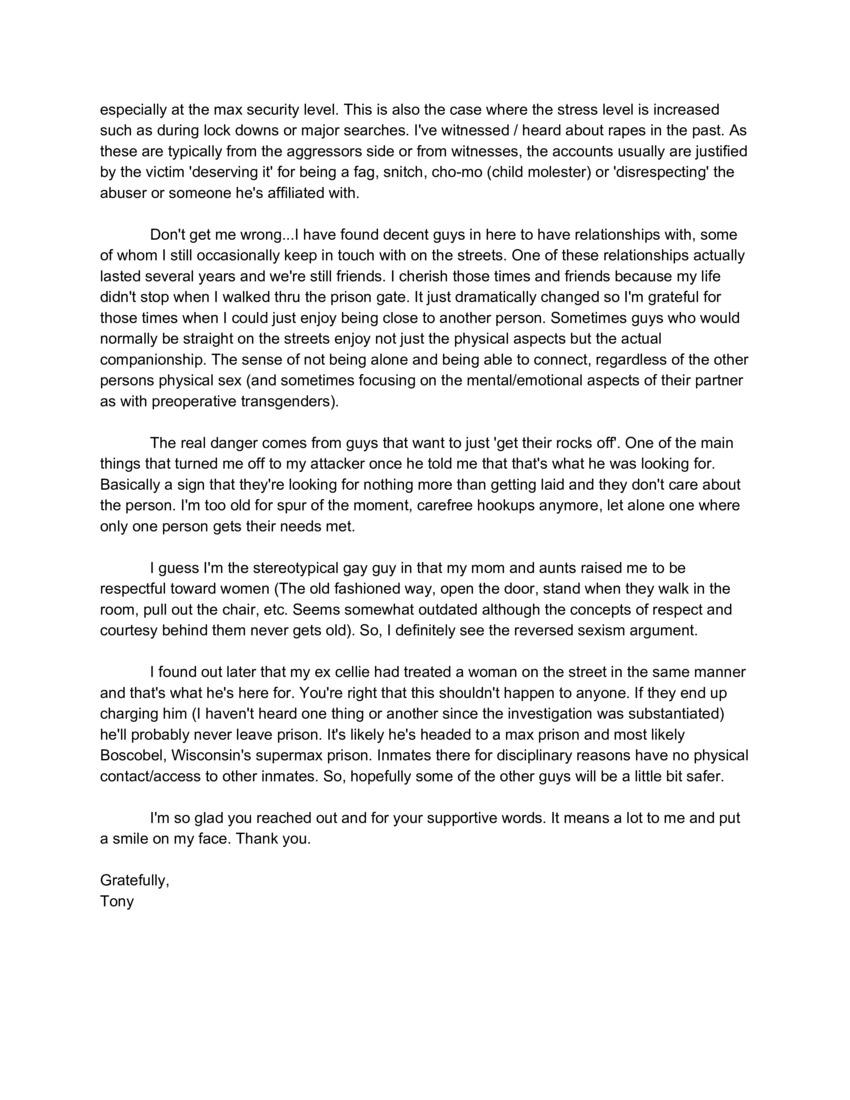 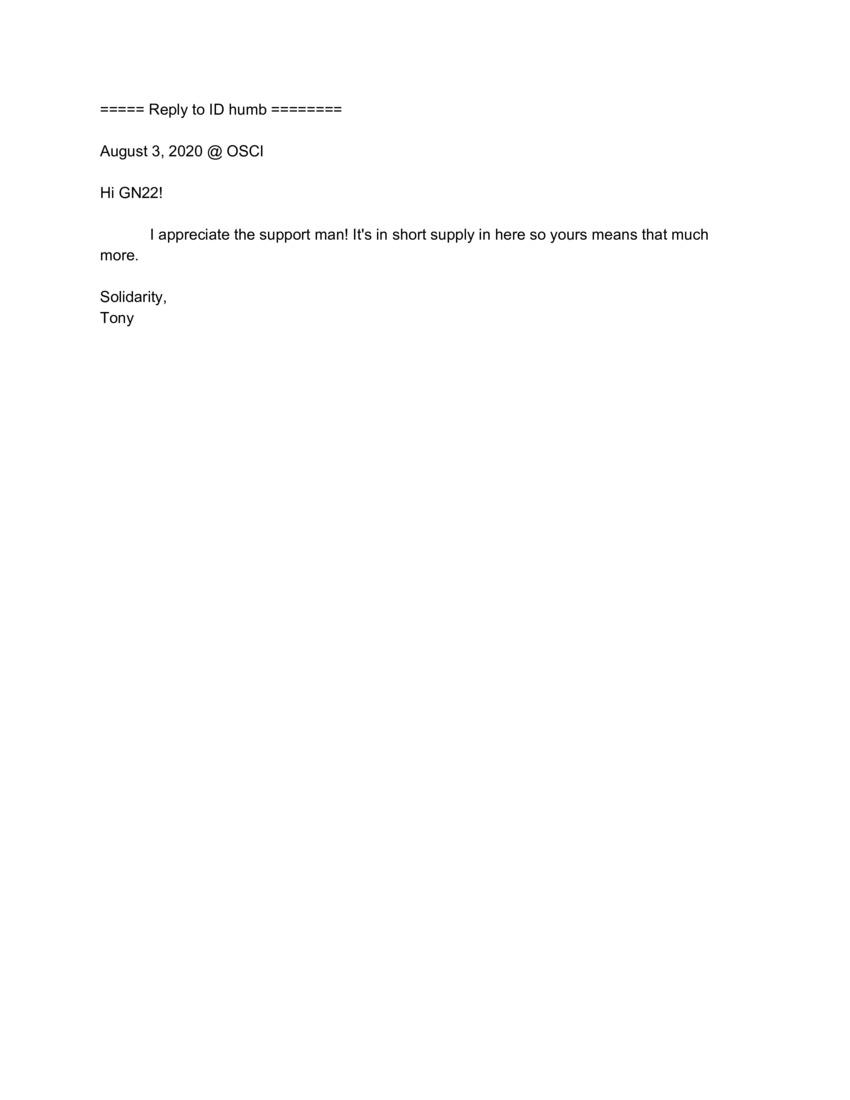