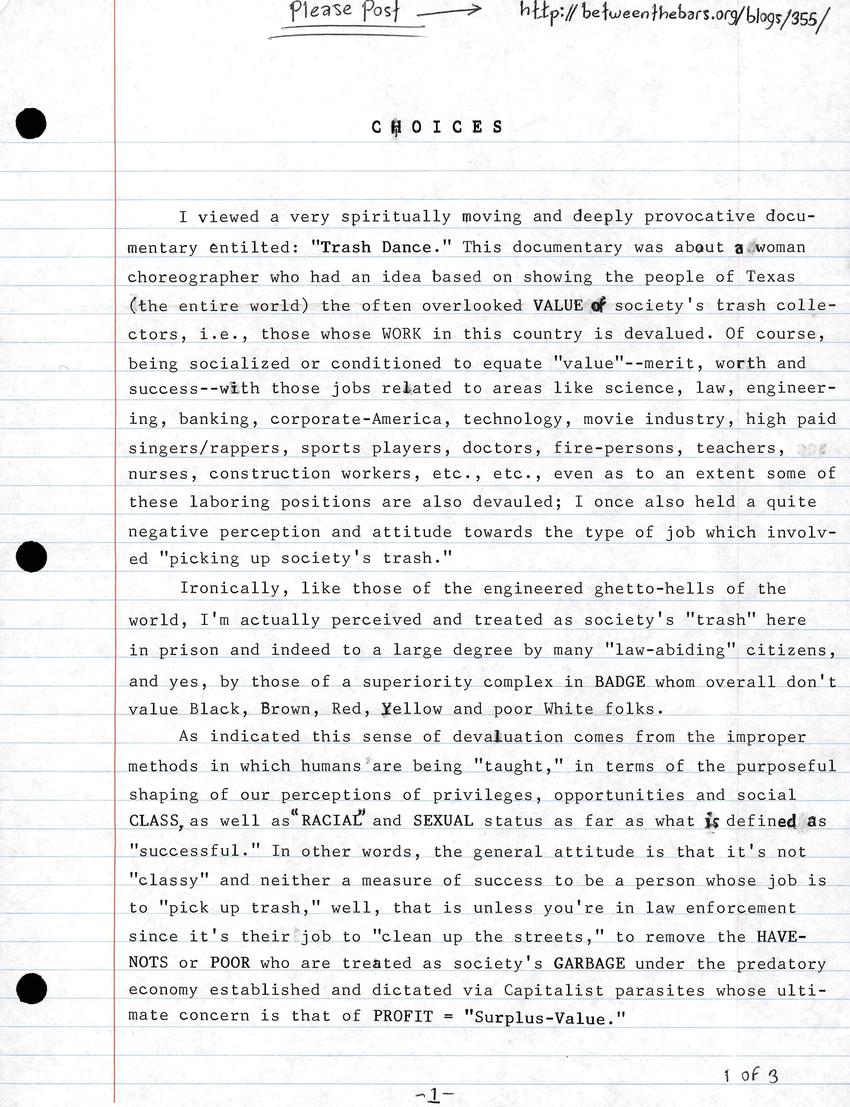 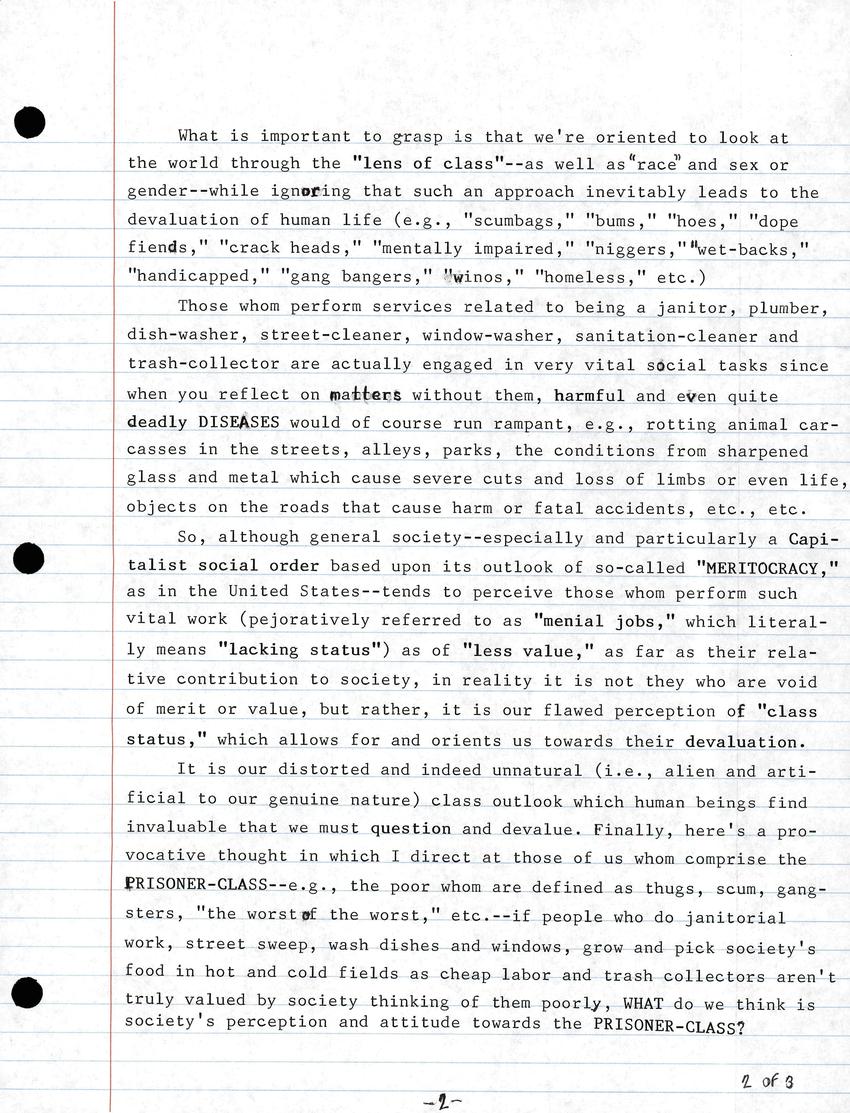 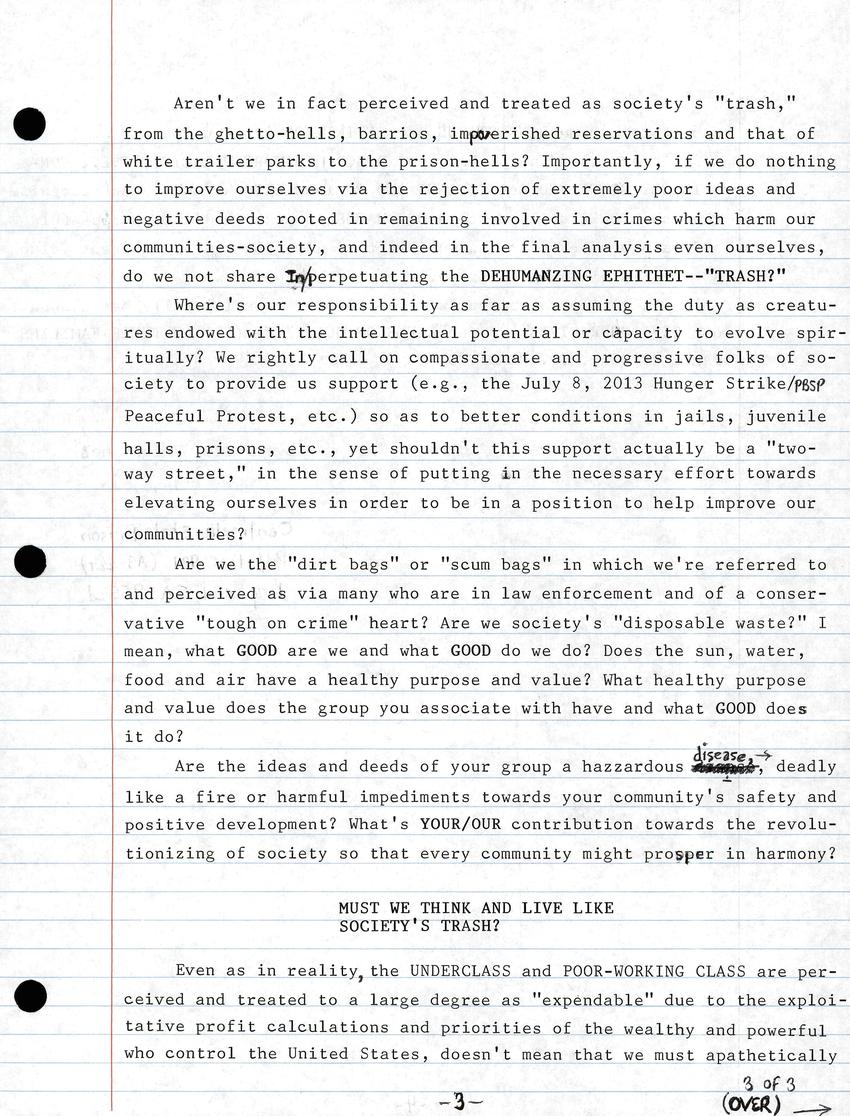 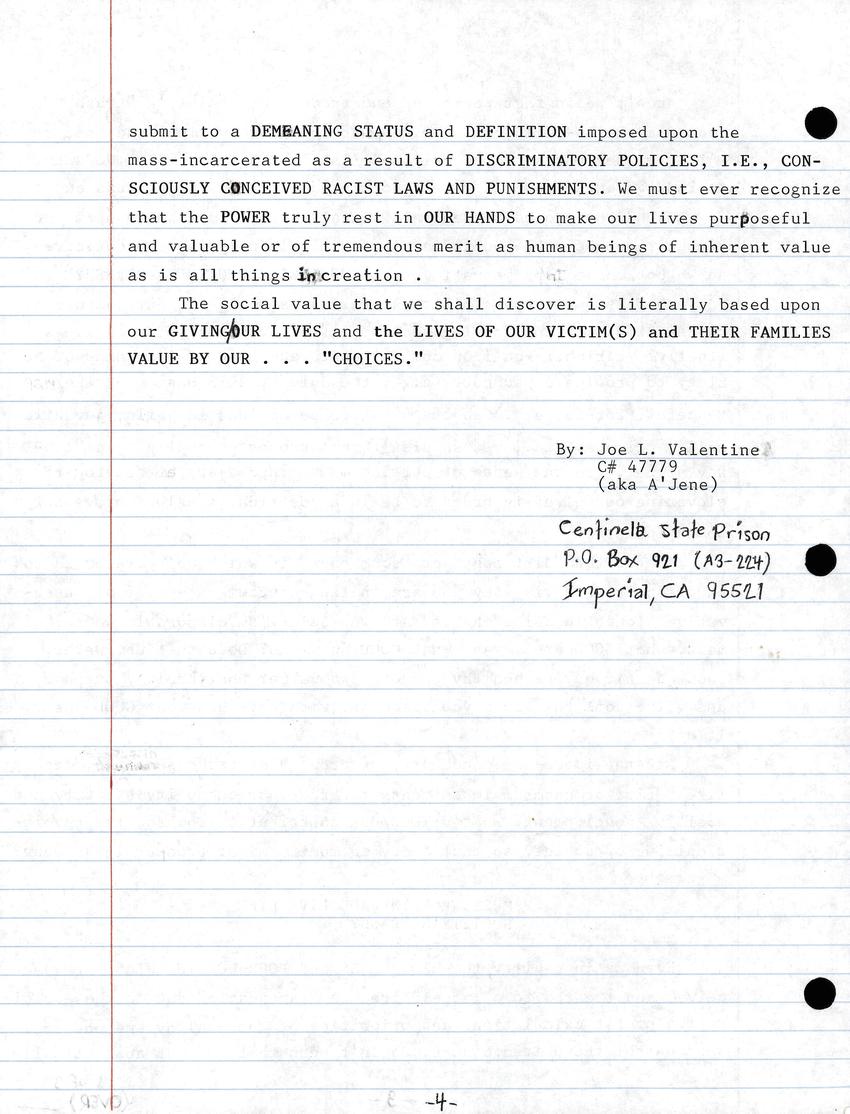 I viewed a very spiritually moving and deeply provocative documentary entitled: "Trash Dance." This documentary was about a woman choreographer who had an idea based on showing the people of Texas (the entire world) the often overlooked VALUE of society's trash collectors, i.e., those whose WORK in this country are devalued. Of course, being socialized or conditioned to equate "value"--merit, worth and success--with those jobs related to areas like science, law, engineering, banking, corporate-America, technology, movie industry, high paid singers/rappers, sports players, doctors, fire-persons, teachers, nurses, construction workers, etc., etc., even as to an extent some of these laboring positions are also devalued; I once also held quite negative perception and attitude towards the type of job which involved "picking up society's trash."

Ironically, Like those of the engineered ghetto-hells of the world, I'm actually perceived and treated as society's "trash" here in prison and indeed to a large degree by many "law abiding" citizens, and yes, by those of superiority complex in BADGE whom overall don't value Black, Brown, Red, Yellow and poor White folks.

As indicated this sense of devaluation comes from the improper methods in which humans are being "taught," in terms of the purposeful shaping of our perceptions of privileges, opportunities and social CLASS, as well as "RACIAL" and SEXUAL status as far as what is defined as "successful." In other words, the general attitude is that it's not "classy" and neither is a measure of success to be a person whose job is to "pick up trash," well, that is unless you're in law enforcement since it's their job to "clean up the streets," to remove the HAVE-NOTS or POOR who are treated as society's GARBAGE under the predatory economy established and dictated via Capitalist parasites whose ultimate concern is that of PROFIT = "Surplus-Value."

What is important to grasp is that we're oriented to look at the world through the "lens of class"--as well as "race" and sex or gender--while ignoring that such an approach inevitably leads to the devaluation of human life (e.g.. "scumbags," "bums," "hoes," "dope friends," "crack heads," "mentally impared," "niggers," "wet-blacks," "handicapped," "gang bangers," "winos," "homeless," etc.)

Those whom perform services related to being a janitor, plumber, dish-washer, street-cleaner, window-washer, sanitation-cleaner and trash-collector are actually engaged in very vital social tasks since when you reflect on matters without them, harmful and even quite deadly DISEASES would of course run rapant, e.g., rotting animal carcasses in the streets, alleys, parks, the conditions from sharpened glass and metal which cause severe cuts and loss of limbs or even life, objects on the roads that cause harm or fatal accidents, etc., etc.

So, although general society--especially and particularly a Capiralist social order based upon its outlook of so-called "MERITOCRACY," as in the United States--tends to perceive those whom perform such vital work (pejoratively referred to as "menial jobs," which literally means "lacking status") as of "less value," as far as their relative contribution to society, in reality it is not who they are void of merit or value, but rather, it is our flawed perception of "class status," which allows for and orients us towards their devaluation.

It is our distorted and indeed unnatural (i.e., alien and artificial to our genuine nature) class outlook which human beings find invaluable that we must question and devalue. Finally, here's a provocative thought in which I direct at those of us whom comprise the PRISONER-CLASS--e.g., the poor whom are defined as things, scum, gangsters, "the worst of the worst," etc.--if people who do janitorial work, street sweep, wash dishes and windows, grow and pick society's food in hot and cold fields as cheap labor and trash collectors aren't truly valued by society thinking of them poorly, WHAT do we think is society's perception and attitude towards the PRISONER-CLASS?

Aren't we all fact perceived and treated as society's "trash," from the ghetto-hells, barrios, impoverished reservations and that of white trailer parks to the prison-hells? Importantly, if we do nothing to improve ourselves via the rejection of extremely poor ideas and negative deeds rooted in remaining involved in crimes which harm our communities-society, and indeed in the final analysis even ourselves, do we not share Inperpetuating the DEMUMANIZING EPITHET--"TRASH?"

Where's our responsibility as far as assuming the duty as creatures endowed with the intellectual potential or capacity to evolve spiritually? We rightly call on compassionate and progressive folks so society to provide us support (e.g., the July 8, 2013 Hunger Strike/PBSP Peaceful Protest, etc.) so as to better conditions in jails, juvenile halls, prisons, etc., yet shouldn't this support actually be a "two-way street," in the sense of putting in the necessary effort towards elevating ourselves in order to be in a position to help improve our communities?

Are we the "dirt bags" or "scum bags" in which we're referred to and perceived as via many who are in law enforcement and of conservative "tough and crime" heart? Are we society's "disposable waste?" I mean what GOOD are we and what GOOD do we do? Does the sun, water, food and air have a healthy purpose and value? What healthy purpose and value does the group you associate with have and what GOOD does it do?

Are the ideas and deeds of your group a hazardous disease, deadly like a fire or harmful impediments towards your community's safety and positive development? What's YOUR/OUR contribution towards the revolutionizing of society so that every community might prosper in harmony?

Even as in reality, the UNDERCLASS and POOR-WORKING CLASS are perceived and treated to a large degree as 'expendable" due to the exploitative profit calculations and priorities of the wealthy and powerful who control the United States, doesn't mean that we must pathetically submit to a DEMEANING STATUS and DEFINITION imposed upon the mass-incarcerated as a result of a DISCRIMINATORY POLICIES, I.E., CONSCIOUSLY CONCEIVED RACIST LAWS AND PUNISHMENTS. We must ever recognize that the POWER truly rest in OUR HANDS to make our lives purposeful and valuable or of tremendous merit as human beings of inherent value as is all things in creation.

The social value that we shall discover is literally based upon our GIVING OUR LIVES and the LIVES OF OUR VICTIM(S) and THEIR FAMILIES VALUE BY OUR . . . "CHOICES."