Following the Money of Mass Incarceration 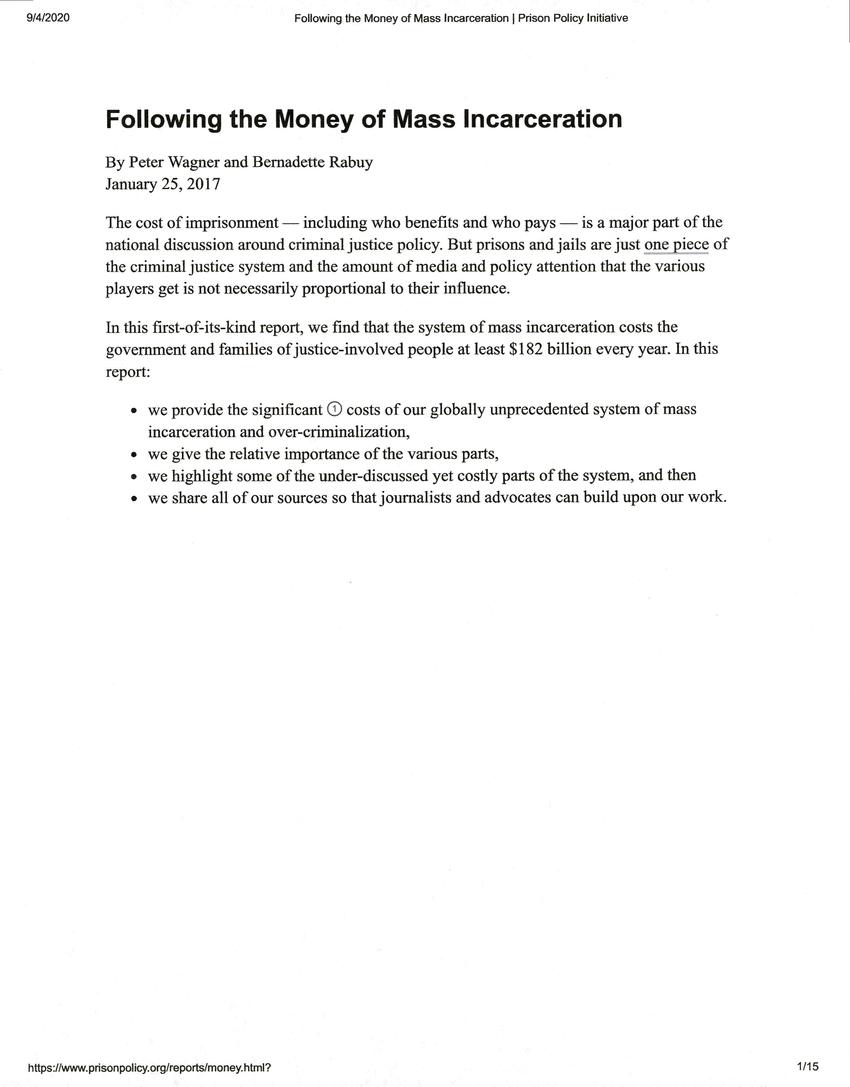 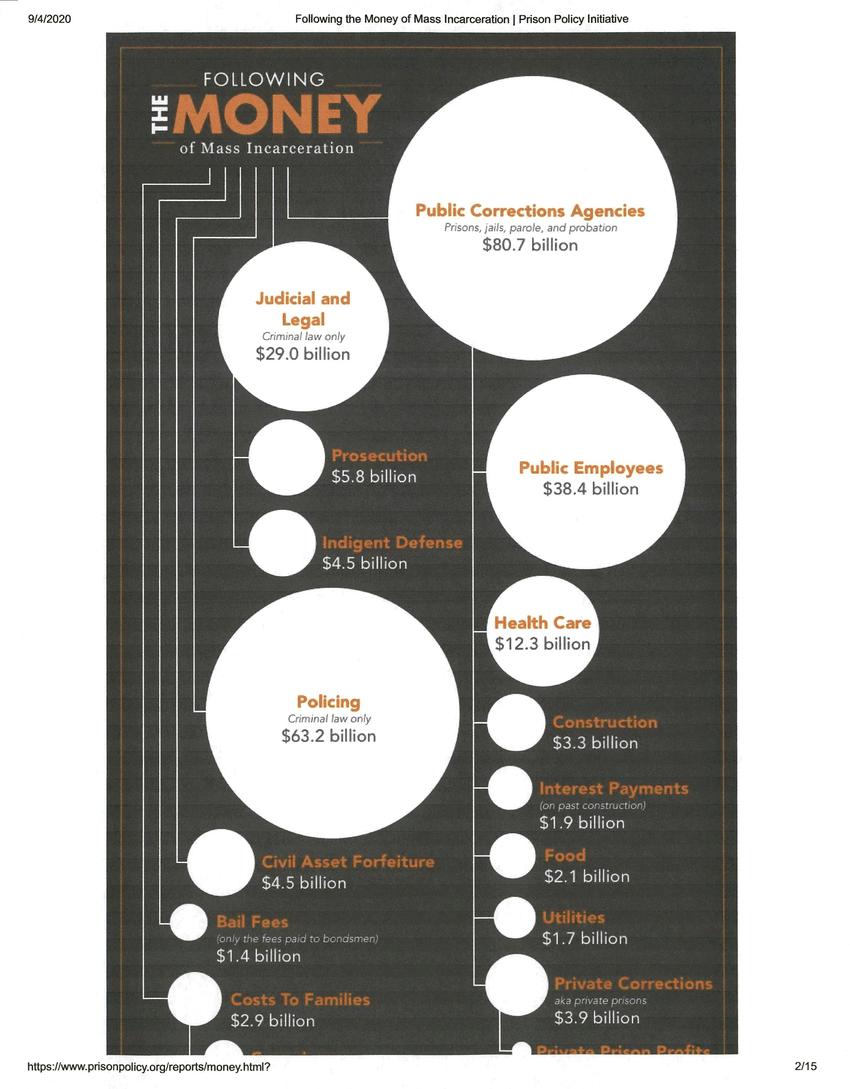 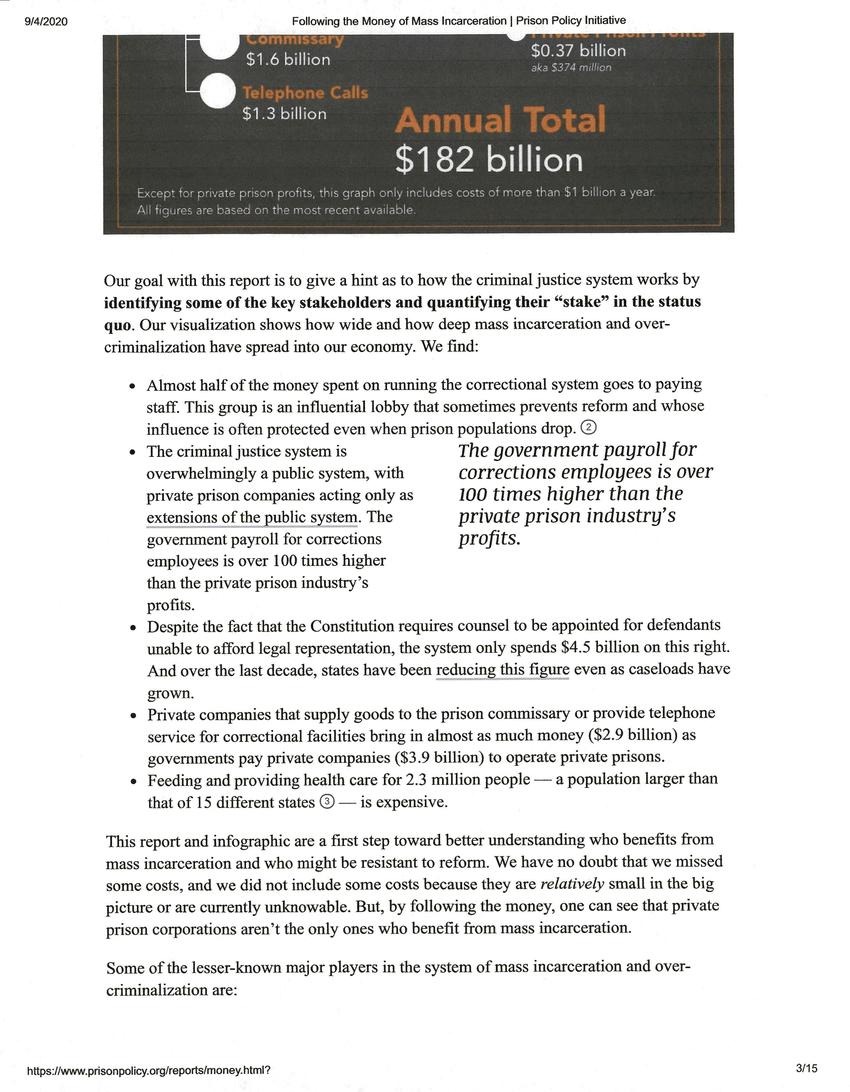 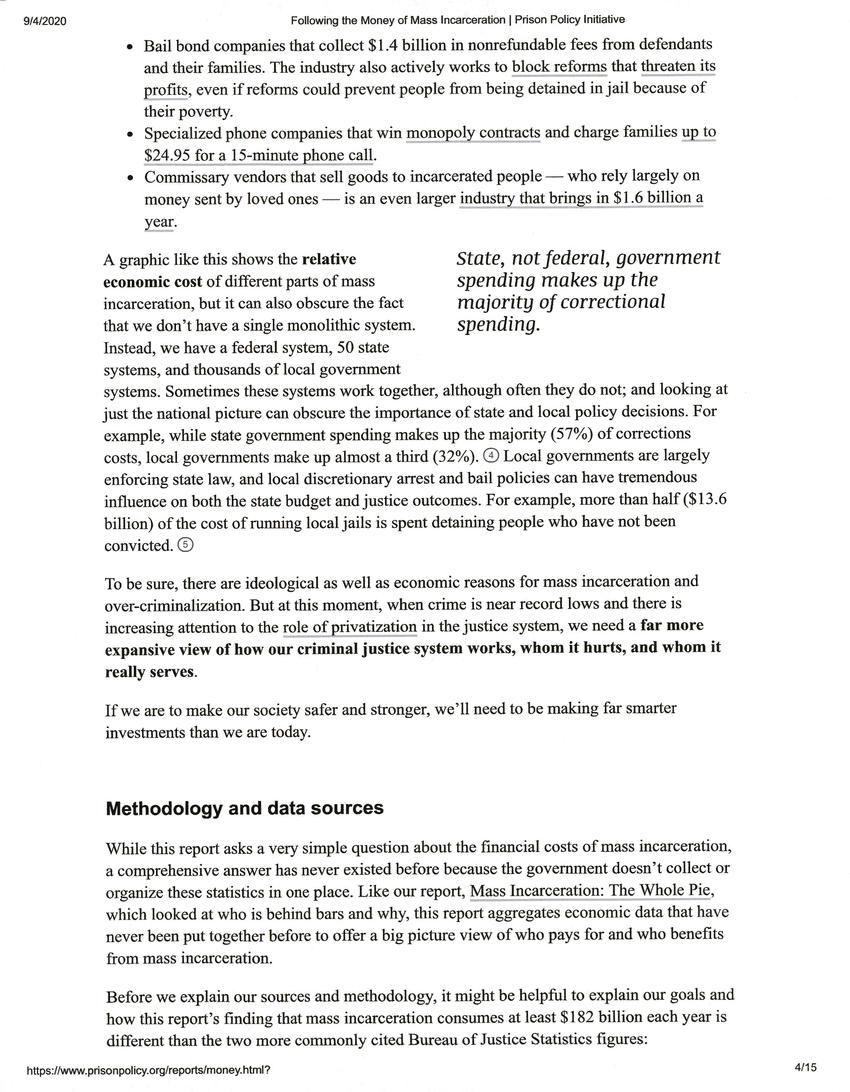 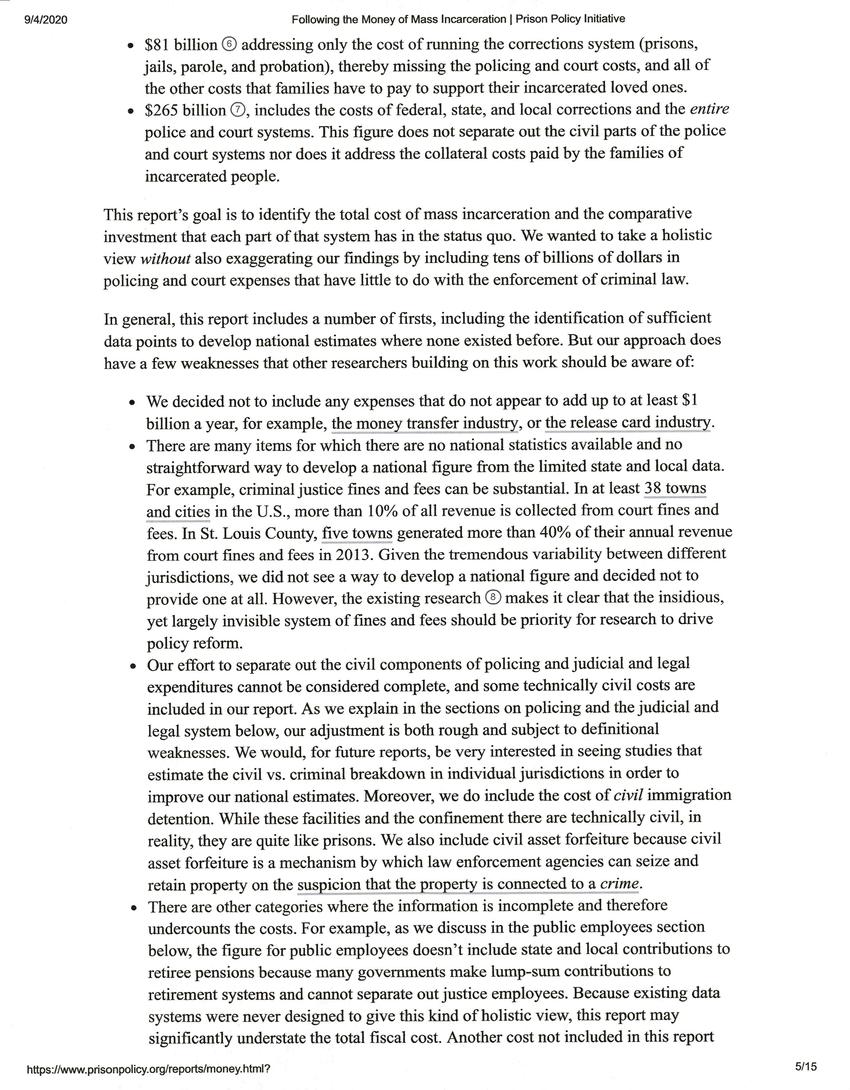 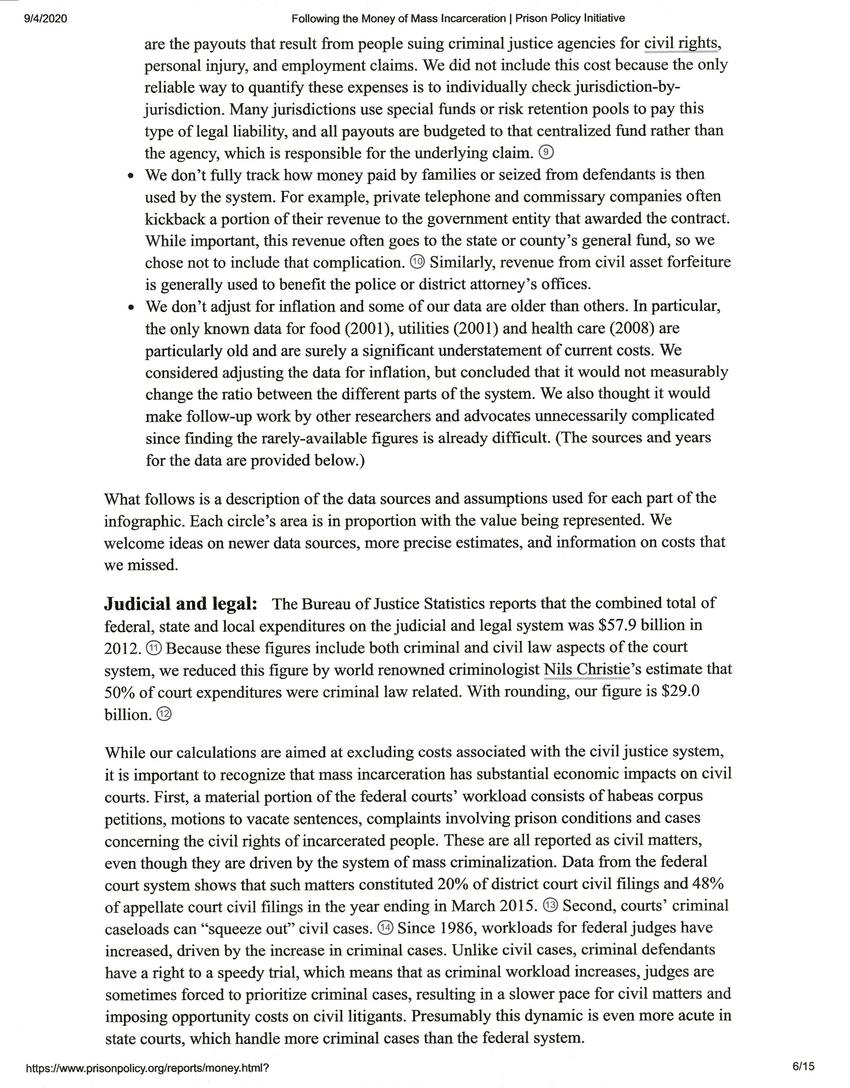 Following the Money of Mass Incarceration

The cost of imprisonment -- including who benefits and who pays -- is a major part of the
national discussion around criminal justice policy. But prisons and jails are just one piece of
the criminal justice system and the amount of media and policy attention that the various
players get is not necessarily proportional to their influence.

In this first-of-its-kind report, we find that the system of mass incarceration costs the
government and families of justice-involved people at least $182 billion every year. In this
report:

* we provide the significant (1) costs of our globally unprecedented system of mass
incarceration and over-criminalization,
* we give the relative importance of the various parts,
* we highlight some of the under-discussed yet costly parts of the system, and then
* we share all of our sources so that journalists and advocates can build upon our work.

[Top part of infographic about fees associated with mass incarceration]

9/4/2020 Following the Money of Mass Incarceration

[Bottom part of infographic about fees associated with mass incarceration]

Our goal with this report is to give a hint as to how the criminal justice system works by
identifying some of the key stakeholders and quantifying their "stake" in the status
quo. Our visualization shows how wide and how deep mass incarceration and over-
criminalization have spread into our economy. We find:

* Almost half of the money spent on running the correctional system goes to paying
staff. This group is an influential lobby that sometimes prevents reform and whose
influence is often protected even when prison populations drop. (2)
* The criminal justice system is The government payroll for
overwhelmingly a public system, with corrections employees is over
private prison companies acting only as 100 times higher than the
extensions of the public system. The private prison industry's
government payroll for corrections profits.
employees is over 100 times higher
than the private prison industry's
profits.
* Despite the fact the Constitution requires counsel to be appointed for defendants
unable to afford legal representation, the system only spends $4.5 billion on this right.
And over the last decade, states have been reducing this figure even as caseloads have
grown.
* Private companies that supply goods to the prison commissary or provide telephone
service for correctional facilities bring in almost as much money ($2.9 billion) as
governments pay private companies ($3.9 billion) to operate private prisons.
* Feeding and providing health care for 2.3 million people -- a population larger than
that of 15 different states (3) -- is expensive.

This report and infographic are a first step toward better understanding who benefits from
mass incarceration and who might be resistant to reform. We have no doubt that we missed
some costs, and we did not include some costs because they are relatively small in the big
picture or are currently unknowable. But, by following the money, one can see that private
prison corporations aren't the only ones who benefit from mass incarceration.

Some of the lesser-known major players in the system of mass incarceration and over-
criminalization are:

* Bail bond companies that collect $1.4 billion in nonrefundable fees from defendants
and their families. The industry also actively works to block reforms that threaten its
profits, even if reforms could prevent people from being detained in jail because of
their poverty.
* Specialized phone companies that win monopoly contracts and charge families up to
$24.95 for a 15-minute phone call.
* Commissary vendors that sell goods to incarcerated people -- who rely largely on
money sent by loved ones -- is an even larger industry that brings in $1.6 billion a
year.

A graphic like this shows the relative State, not federal, government
economic cost of different parts of mass spending makes up the
incarceration, but it can also obscure the fact majority of correctional
that we don't have a single monolithic system. spending.
Instead, we have a federal system, 50 state
systems, and thousands of local government
systems. Sometimes these systems work together, although often they do not; and looking at
just the national picture can obscure the importance of state and local policy decisions. For
example, while state government spending makes up a majority (57%) of corrections
costs, local governments make up almost a third (32%). (4) Local governments are largely
enforcing state law, and local discretionary arrest and bail policies can have tremendous
influence on both the state budget and justice outcomes. For example, more than half ($13.6
billion) of the cost of running local jails is spent detaining people who have not been
convicted. (5)

To be sure, there are ideological as well as economic reasons for mass incarceration and
over-criminalization. But at this moment, when crime is near record lows and there is
increasing attention to the role of privatization in the justice system, we need a far more
expansive view of how our criminal justice system works, whom it hurts, and whom it
really serves.

If we are to make our society safer and stronger, we'll need to be making far smarter
investments than we are today.