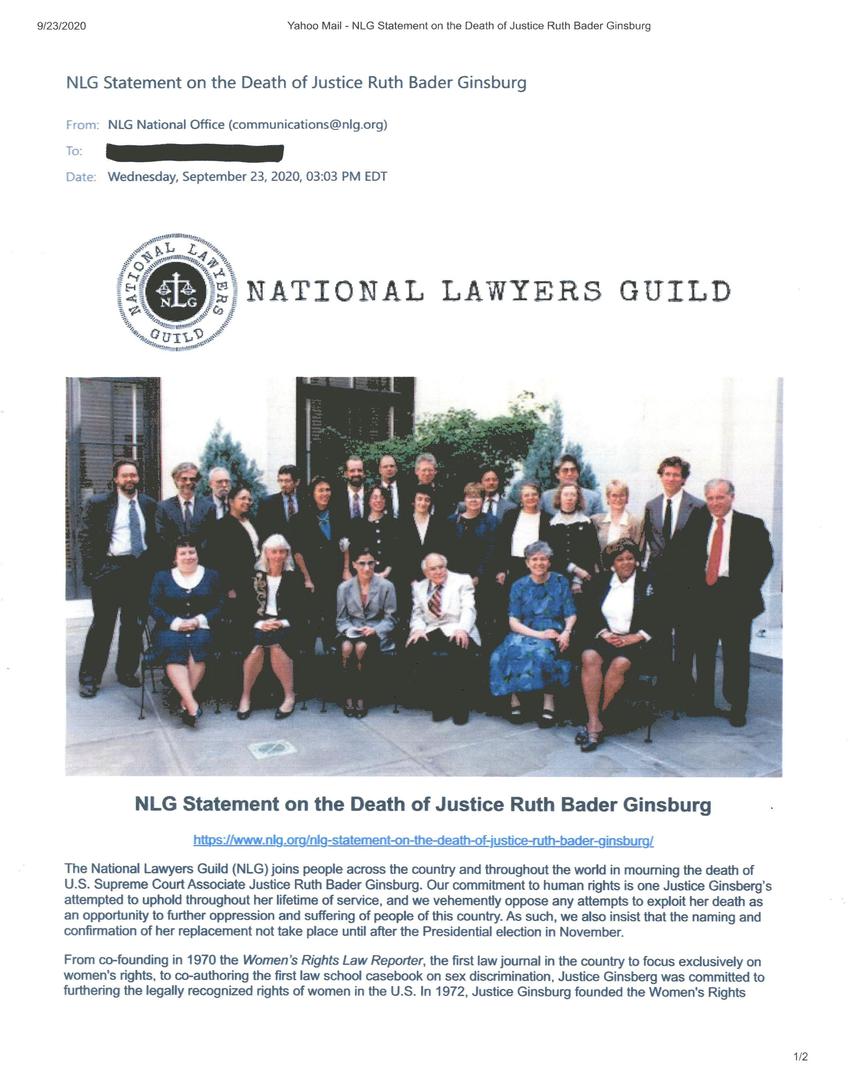 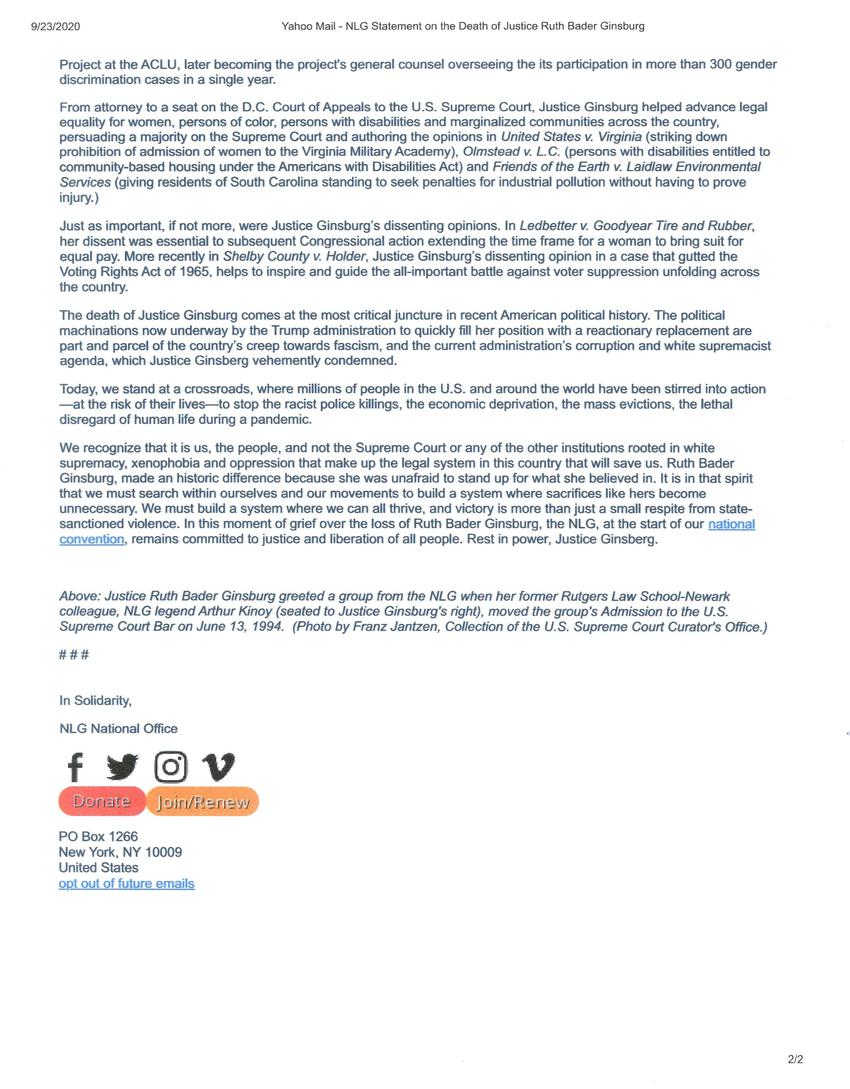 The National Lawyers Guild (NLG) joins the people across the country and throughout the world in mourning the death of
U.S. Supreme Court Associate Justice Ruth Bader Ginsburg. Our commitment to human rights is one Justice Ginsberg's
attempted to uphold throughout her lifetime of service, and we vehemently oppose any attempts to exploit her death as
an opportunity to further oppression and suffering of people of this country. As such, we also insist that the naming and
confirmation of her replacement not take place until after the Presidential Election in Novenmber.

From co-founding in 1970 the Women's Rights Law Reporter, the first journal in the country fo focus exclusively on
women's rights, to co-authoring the first law school casebook on sex discrimination, Justice Ginsberg was committed to
furthering the legally recognized rights of women in the U.S. In 1972, Justice Ginsburg founded the Women's Rights
Project at the ACLU, later becoming the project's general counsel overseeing the its participation in more than 300 gender
discrimination cases in a single year.

From attorney to a seat on the D.C. Court of Appeals to the U.S. Supreme Court, Justice Ginsburg helped advance legal
equality for women, persons of color, persons with disabilities and marginalized communities across the country,
persuading a majority on the Supreme Court and authoring the opinions in United States v. Virginia (striking down
prohibition of admission of women to the Virginia Military Academy), Olmstead v. L.C. (persons with disabilities entitled to
community-based housing under the Americans with Disabilities Act) and Friends of the Earth v. Laidlaw Environmental
Services (giving residents of South Carolina standing to seek penalties for industrial pollution without having to prove
injury).

Just as important, if not more, were Justice Ginsburg's dissenting opinions. In Ledbetter v. Goodyear Tire and Rubber,
her dissent was essential to subsequent Congressional action extending the time frame for a woman to bring suit for
equal pay. More recently in Shelby County v. Holder, Justice Ginsburg's dissension opinion in a case that gutted the
Voting Rights Act of 1965, helps to inspire and guide the all-important battle against voter suppression unfolding across
the country.

The death of Justice Ginsburg comes at the most critical juncture in recent American political history. The political
machinations now underway by the Trump administration to quickly fill her position with a reactionary replacement are
part and parcel of the country's creep towards racism, and the current administration's corruption and white supremacist
agenda, which Justice Ginsburg vehemently condemned.

Today, we stand at a crossroads, where millions of people in the U.S. and around the world have been stirred into the action
-at the risk of their lives-to stop the racist police killings, the economic deprivation, the mass evictions, the lethal
disregard of human life during a pandemic.

We recognize that it is us, the people, and not the Supreme Court or any of the other institutions rooted in white
supremacy, xenophobia and oppression that make up the legal system in this country that will save us. Ruth Bader
Ginsburg, mad an historic difference because she was unafraid to stand up for what she believed in. It is in that spirit
that we must search within ourselves and our movements to build a system where sacrifices like hers become
unnecessary. We must build a system where we can all thrive, and victory is more than just a small respite from state-
sanctioned violence. In this moment of grief over the loss of Ruth Bader Ginsburg, the NLG, at the start of our national
convention, remains committed to justice and liberation of all people. Rest in power, Justice Ginsberg.