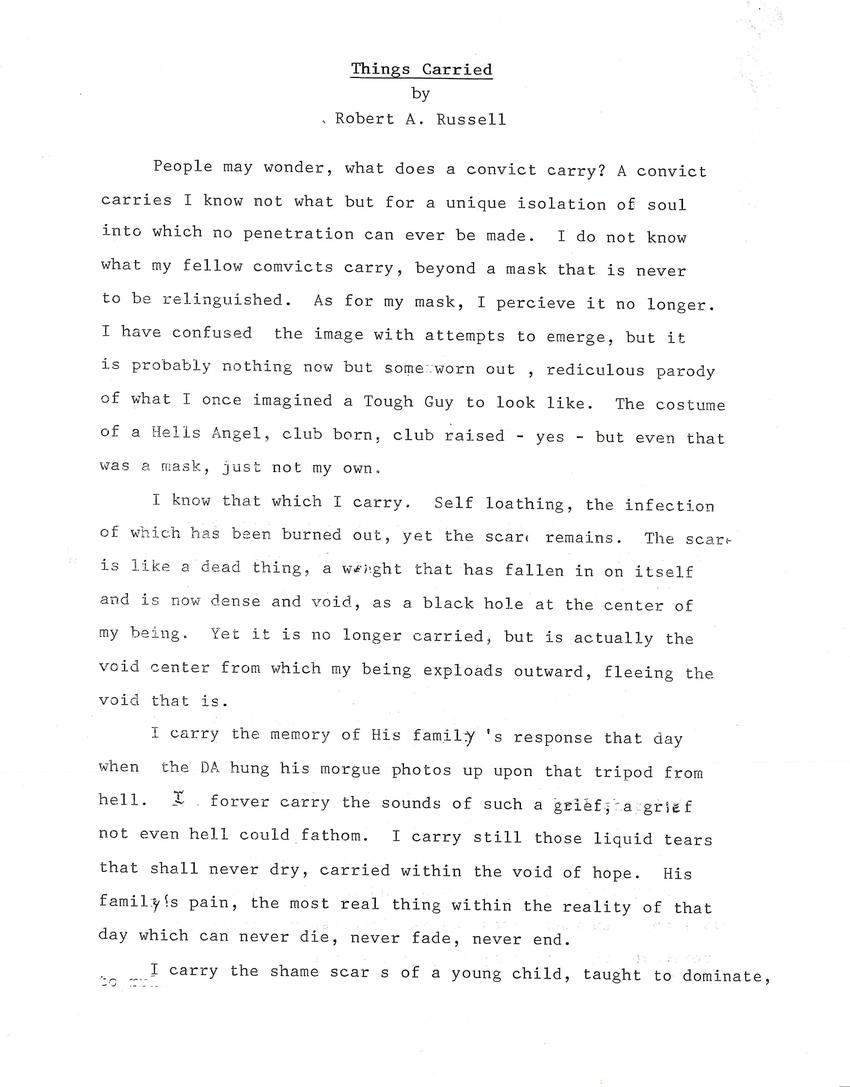 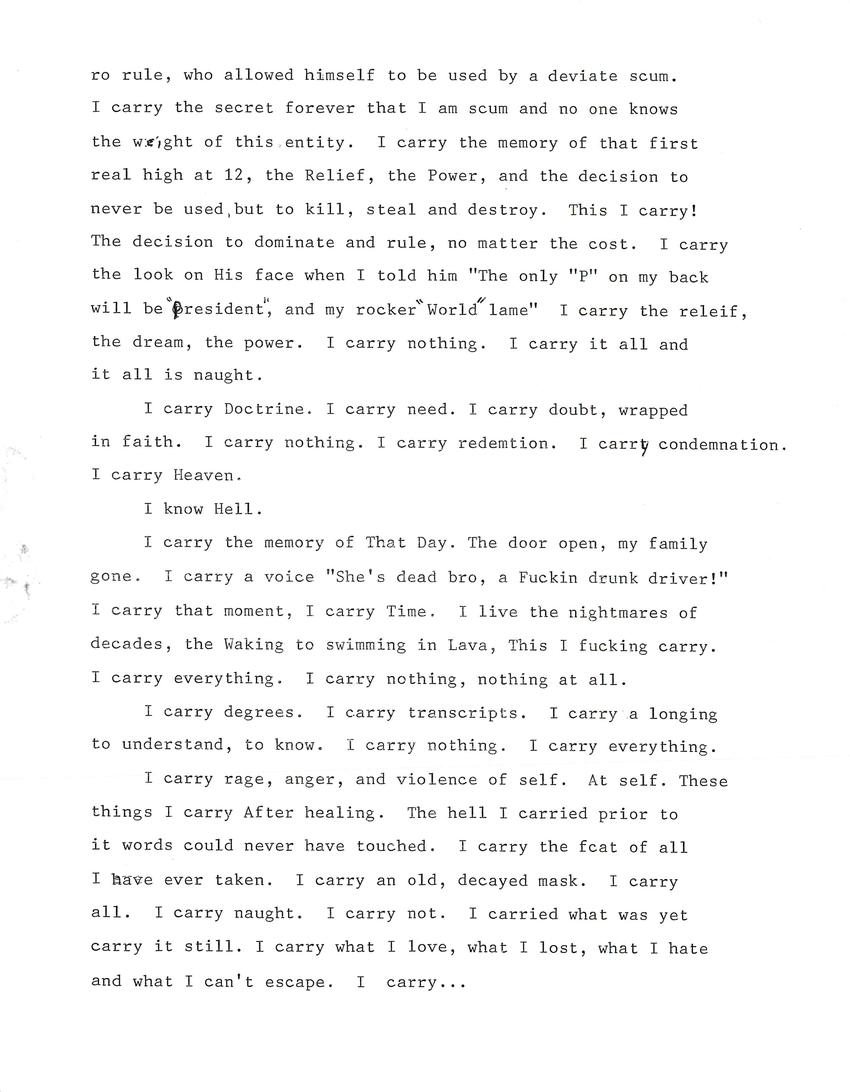 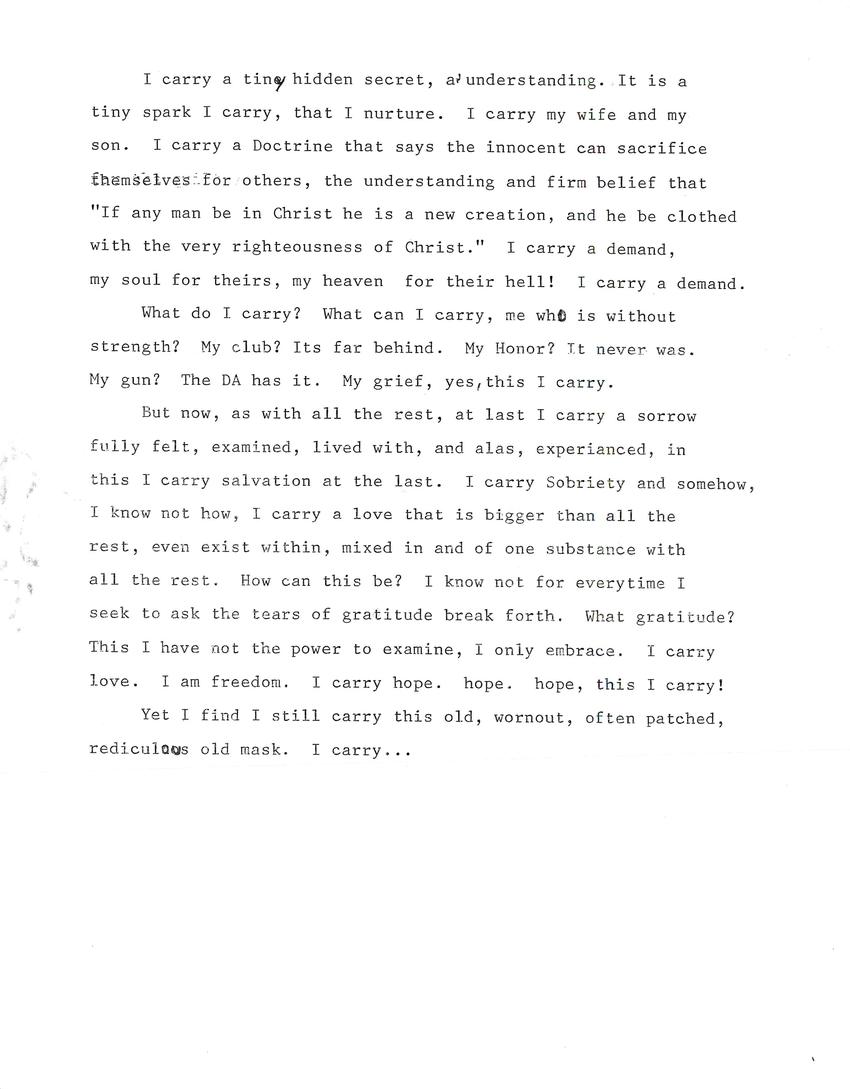 Things Carried
by
Robert A. Russell

People may wonder, what does a convict carry? A convict carries I know not what but for a unique isolation of soul into which penetration can ever be made. I do not know what my fellow convicts carry, beyond a mask that is never to be relinquished. As for my mask, I perceive it no longer. I have confused the image with attempts to emerge, but it is probably nothing now but some worn out, ridiculous parody of what I once imagined a Tough Guy to look like. The costume of a Hells Angel, club born, club raised - yes - but even that was a mask, just not my own.
I know that which I carry. Self loathing, the infection of which has been burned out, yet the scar remains. The scar is like a dead thing, a weight that has fallen in on itself and is now dense and void, as a black hole at the center of my being. Yet it is no longer carried, but is actually the void center from which my being explodes outward, fleeing the void that is.
I carry the memory of His family's response that day when the DA hung his morgue photos up upon that tripod from hell. I forever carry the sounds of such a grief, a grief not even hell could fathom. I carry still those liquid tears that shall never dry, carried within the void of hope. His family's pain, the most real thing within the reality of that day which can never die, never fade, never end.
I carry the shame scars of a young child, taught to dominate, to rule, who allowed himself to be used by a deviate scum. I carry the secret forever that I am scum and no one knows the weight of this entity. I carry the memory of that first real high at 12, the Relief, the Power, and the decision to never be used, but to kill, steal and destroy. This I carry! The decision to dominate and rule, no matter the cost. I carry the look on His face when I told him "The only "P" on my back will be "President", and my rocker "World" lame" I carry the relief, the dream, the power. I carry nothing. I carry it all and it all is naught.
I carry Doctrine. I carry need. I carry doubt, wrapped in faith. I carry nothing. I carry redemption. I carry condemnation. I carry Heaven.
I know Hell.
I carry the memory of That Day. The door open, my family gone. I carry a voice "She's dead bro, a Fuckin drunk driver!" I carry that moment, I carry Time. I live the nightmares of decades, the Waking to swimming in Lava, This I fucking carry. I carry everything. I carry nothing, nothing at all.
I carry degrees. I carry transcripts. I carry a longing to understand, to know. I carry nothing. I carry everything.
I carry rage, anger, and violence to self. At self. These things I carry After healing. The hell I carried prior to it words could never have touched. I carry the fcat of all I have ever taken. I carry an old, decayed mask. I carry all. I carry naught. I carry not. I carried what was yet carry it still. I carry what I love, what I lost, what I hate and what I can't escape. I carry...
I carry a tiny hidden secret, an understanding. It is a tiny spark I carry, that I nurture. I carry my wife and my son. I carry a Doctrine that says the innocent can sacrifice themselves for others, the understanding and firm belief that "If any man be in Christ he is a new creation, and he be clothed with the very righteousness of Christ." I carry a demand, my soul for theirs, my heaven for their hell! I carry a demand.
What do I carry? What can I carry, me who is without strength? My club? Its far behind. My Honor? It never was. My gun? The DA has it. My grief, yes, this I carry.
But now, as with all the rest, at last I carry a sorrow fully felt, examined, lived with, and alas, experienced, in this I carry salvation at the last. I carry Sobriety and somehow, I know not how, I carry a love that is bigger than all the rest. How can this be? I know not for everytime I seek to ask the tears of gratitude break forth. What gratitude? This I have not the power to examine, I only embrace. I carry love. I am freedom. I carry hope. hope. hope, this I carry!
Yet I find I still carry this old, wornout, often patched, ridiculous old mask. I carry...

Robert, this a brilliant work. It is raw. It is real. We all carry these things. It defines our humanity. It is cathartic. Pfister