Call to Action: Push to Repeal the PLRA 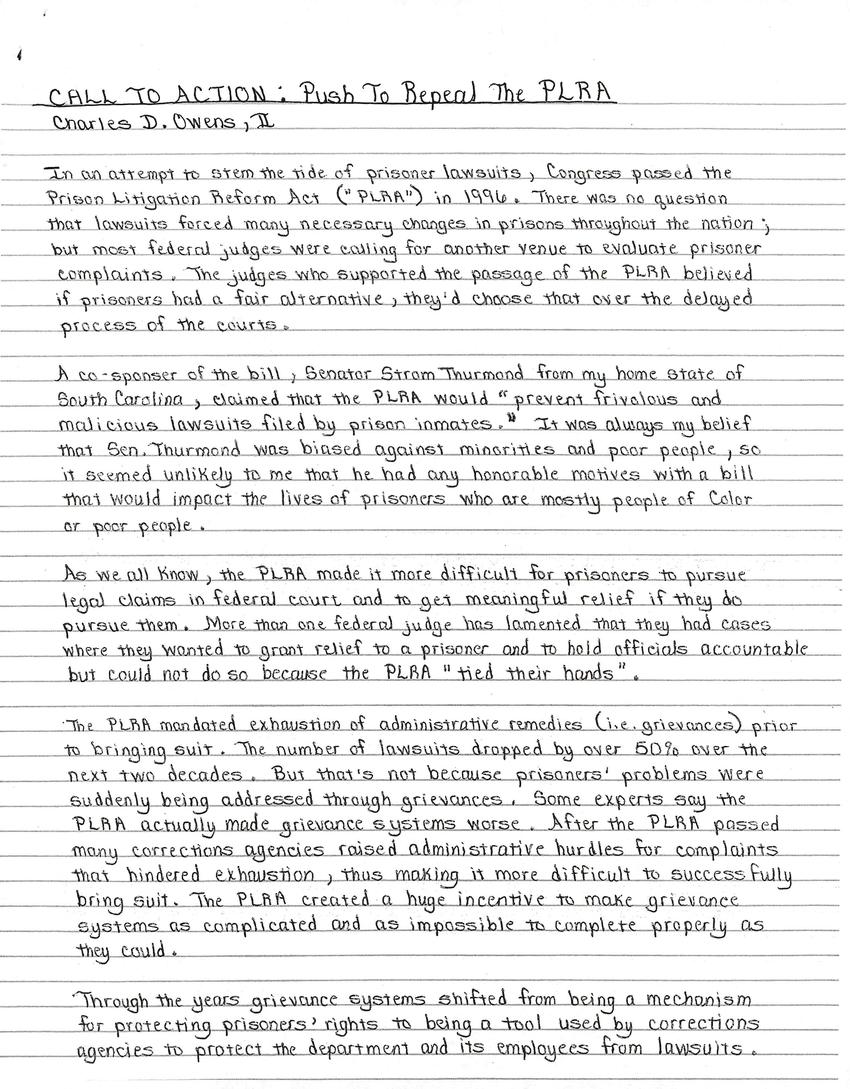 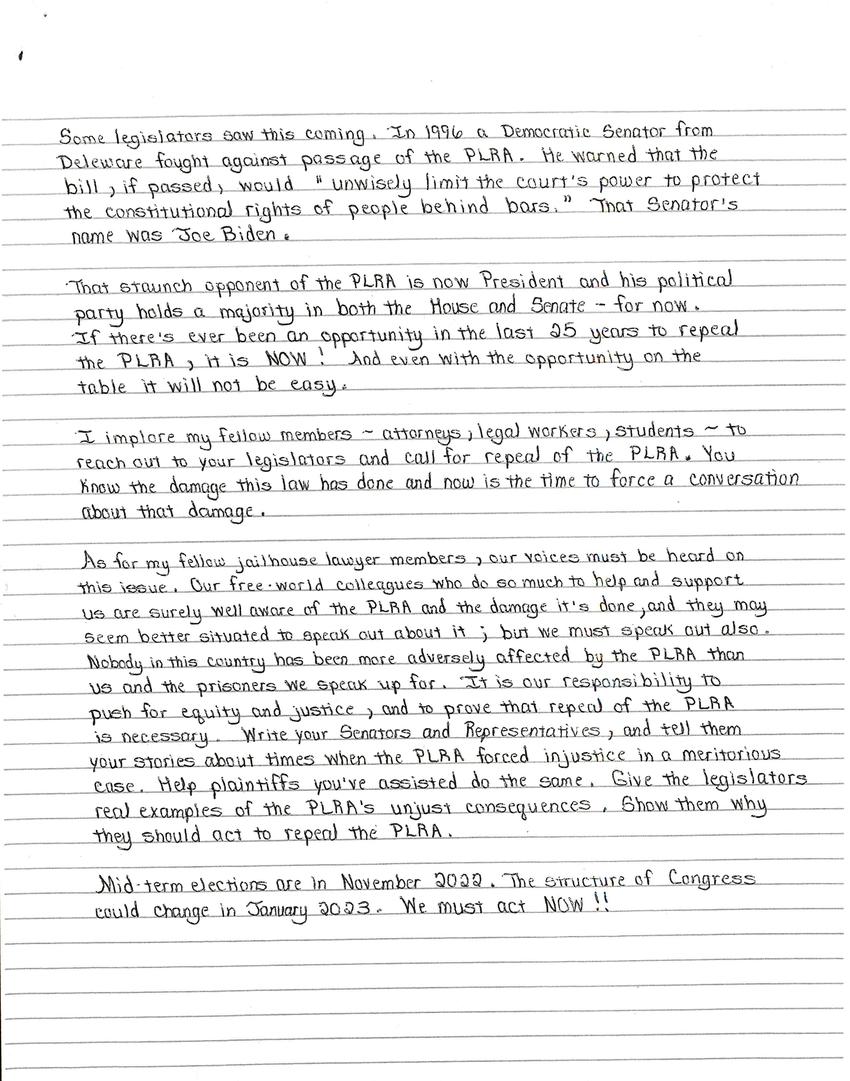 In an attempt to stem the tide of prisoner lawsuits, Congress passed the Prison Litigation Reform Act ("PLRA") in 1996. There was no question that lawsuits forced many necessary changes in prisons through the nation; but most federal judges were calling for another venue to evaluate prisoner complaints. The judges who supported the passage of the passage of the PLRA believed if prisoners had a fair alternative, they'd choose that over the delayed process of the courts.

A co-sponser of the bill, Senator Straw Thurmond from my home state of South Carolina, claimed that PLRA would "prevent frivolous and malicious lawsuits filed by prison inmates." It was always my belief that Sen. Thurmond was biased against minorities and poor people, so it seemed unlikely to me that he had any honorable motives with a bill that would impact the lives of prisoners who are mostly people of Color or poor people.

As we all know, the PLRA made it more difficult for prisoners to pursue legal claims in federal court and to get meaningful relief if they do pursue them. More than one federal judge has lamented that they had cases where they wanted to grant relief to a prisoner and to hold officials accountable but could not do so because the PLRA "tied their hands".

The PLRA mandated exhaustion of administrative remedies (i.e grievances) prior to bringing suit. The number of lawsuits dropped y over 50% the next two decades. But that's not because prisoners' problems were suddenly being addressed through grievances. Some experts say the PLRA actually made grievance systems worse. After the PLRA passed many corrections agencies raised administrative hurdles for complaints that hindered exhaustion, thus making it more difficult to make grievance systems as complicated and as impossible to complete properly as they could.

Through the years grievance systems shifted from being a mechanism for protecting prisoners' rights to being a tool used by corrections agencies to protect the department and its employees from lawsuits.

Some legislators saw this coming. In 1996 a Democratic Senator from Deleware fought against passage of the PLRA. He warned that the bill, if passed, would "unwisely limit the court's power to protect the constitutional rights of people behind bars." That Senator's name was Joe Biden.

That staunch opponent of the PLRA is now President and his political party holds a majority in both the House and Senate - for now. If there's ever been an opportunity in the last 25 years to repeal the PLRA, it is NOW! And even with the opportunity on the table it will not be easy.

I implore my fellow members - attorneys, legal workers, students - to reach out to your legislators and call for repeal of the PLRA. You know the damage this law has done and now is the time to force a conversation about that damage.

As for my fellow jailhouse lawyer members, our voices must be heard on this issue. Our free world colleagues who do so much to help and support us a surely well aware of the PLRA and the damage it's done, and they may seem better situated to speak out about it; but we must speak out also. Nobody in this country has been more adversely affected by the PLRA than us and the prisoners we speak up for. It is our responsibility to push for equity and justice, and to prove that repeal of the PLRA is necessary. Write your Senators and Representatives, and tell them your stories about times when the PLRA forced injustice in a meritorious case. Help plaintiffs you've assisted to the same. Give the legislators real examples of the PLRA's unjust consequences. Show them why they should act to repeal the PLRA.

Mid-term elections are in November 2022. The structure of Congress could change in January 2023. We must act NOW!!

I love your handwriting. You've probably heard people comment on it before, but I really admire it, since my own handwriting is very messy and I struggle to keep it as uniform as you did.