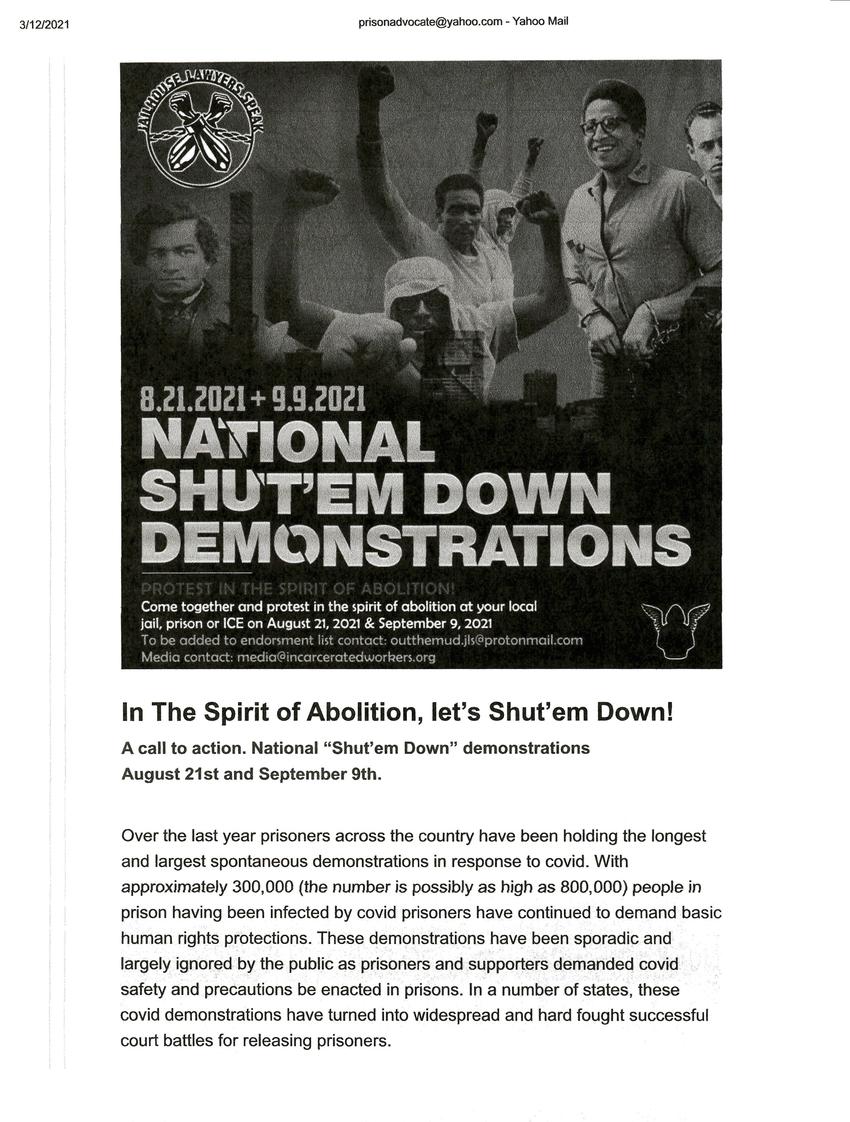 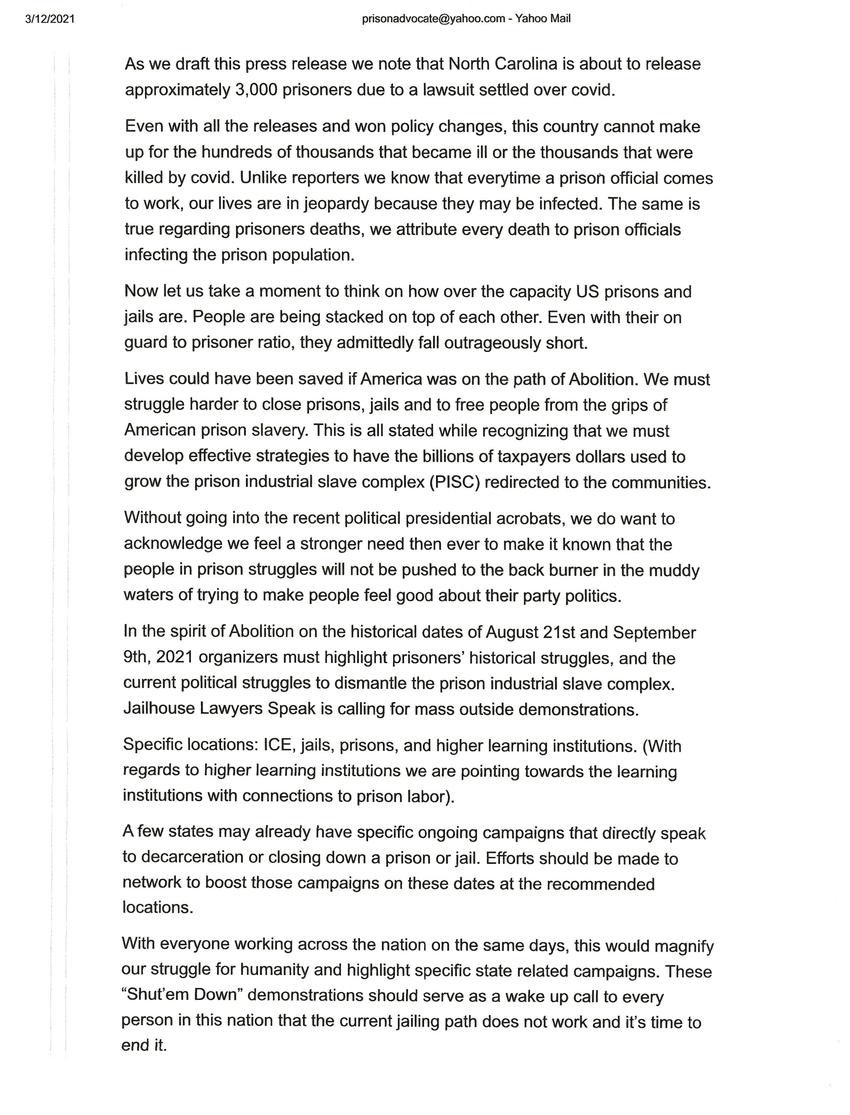 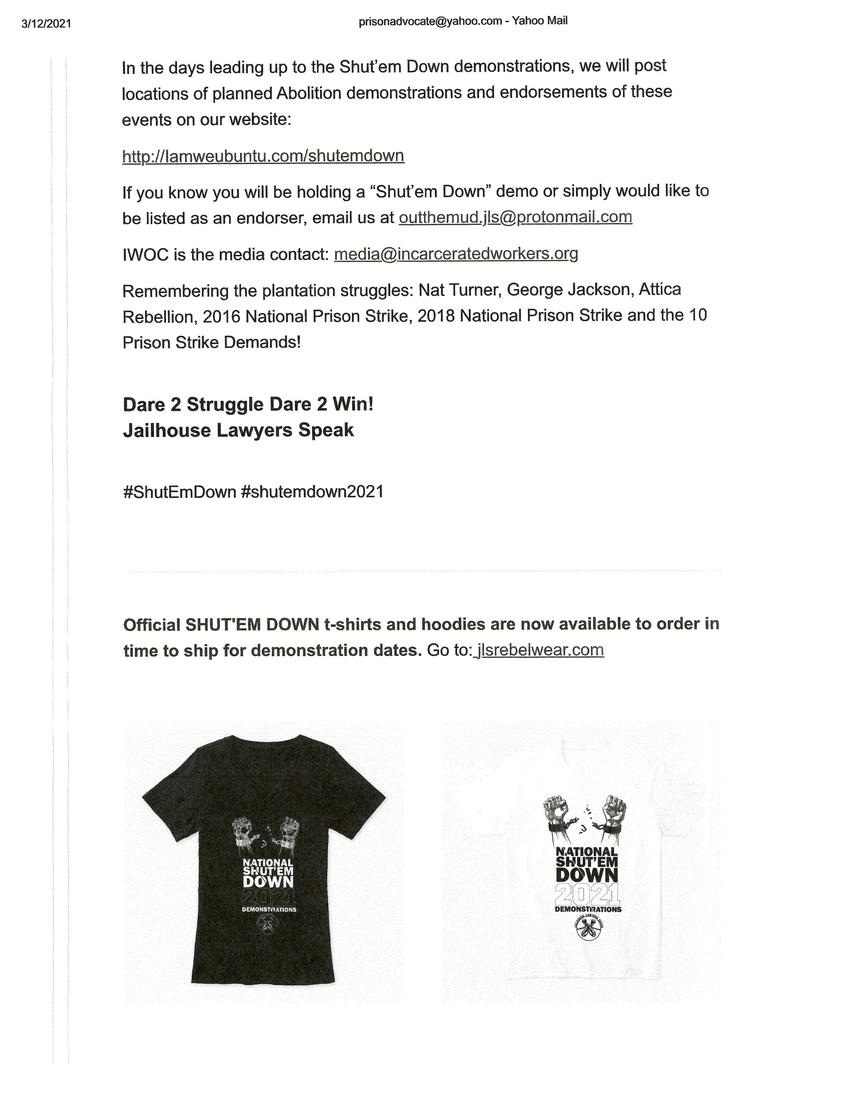 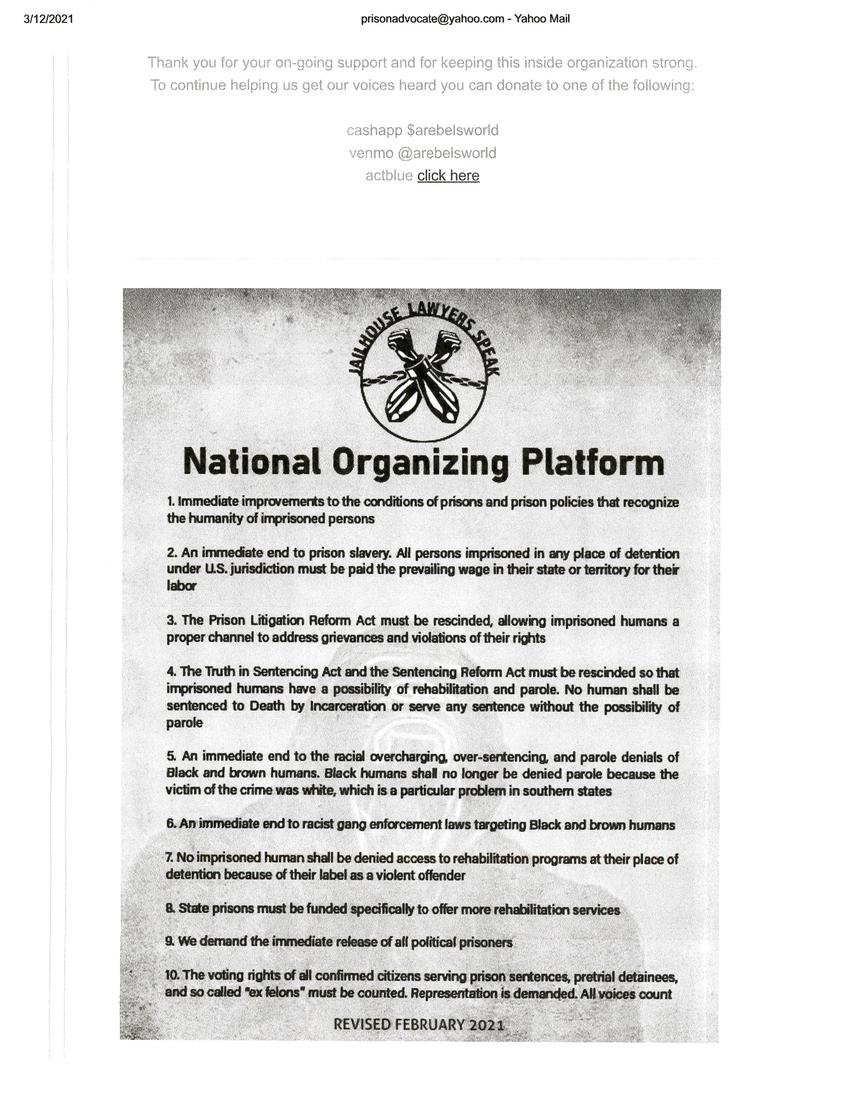 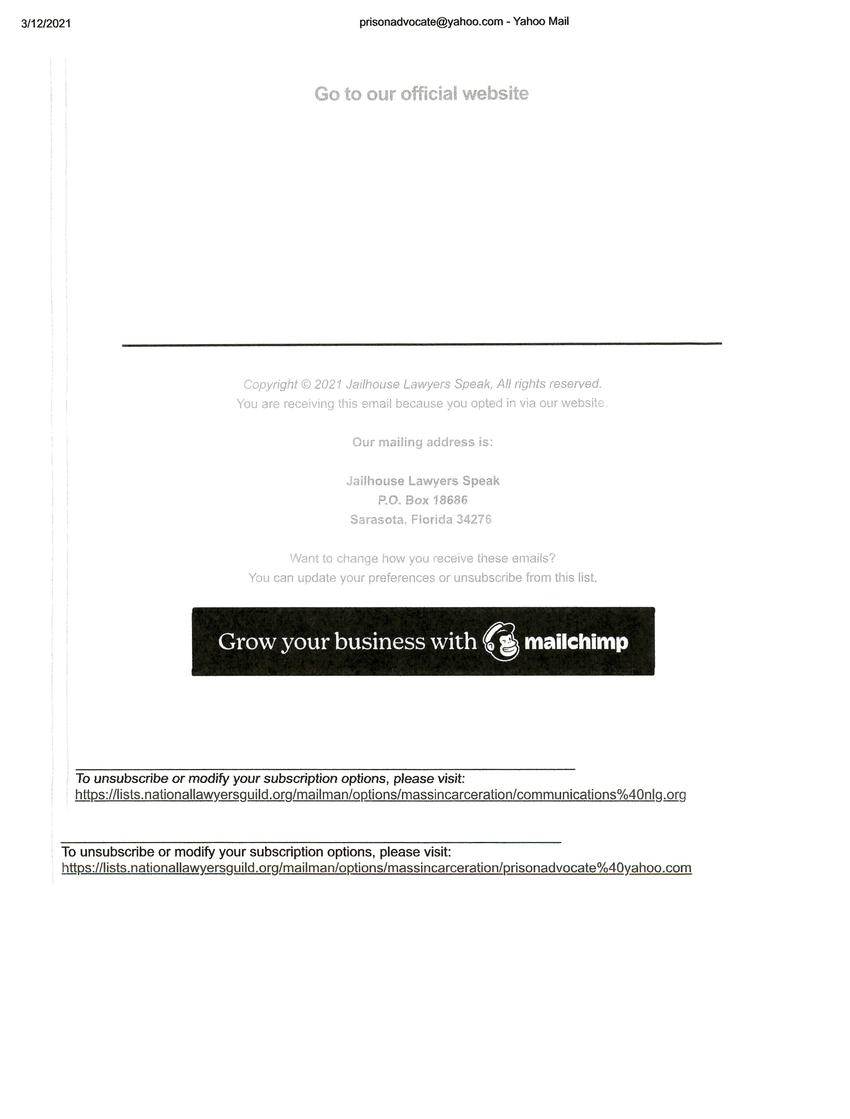 Over the last year prisoners across the country have been holding the longest
and largest spontaneous demonstrations in response to covid. With
approximately 300,000 (the number is possibly as high as 800,000) people in
prison having been infected by covid prisoners have continued to demand basic
human rights protections. These demonstrations have been sporadic and
largely ignored by the public as prisoners and supporters demanded covid
safety and precautions be enacted in prisons. In a number of states, these
covid demonstrations have turned into widespread and hard fought successful
court battles for releasing prisoners.

(#2)
As we draft this press release we note that North Carolina is about to release
approximately 3,000 prisoners due to a lawsuit settled over covid.

Even with all the releases and won policy changes, this country cannot make
up for the hundred of thousands that became ill or the thousands that were
killed by covid. Unlike reporters we know that everytime a prison official comes
to work, our lives are in jeopardy because they may be infected. The same is
true regarding prisoners deaths, we attribute every death to prison officials
infecting the prison population.

Now let us take a moment to think on how over the capacity US prisons and
jails are. People are being stacked on top of each other. Even with their on
guard to prisoner ratio, they admittedly fall outrageously short.

Lives could have been saved if America was on the path of Abolition. We must
struggle harder to close prisons, jails and to free people from the grips of
American prison slavery. The is all stated while recognizing that we must
develop effective strategies to have the billions of taxpayers dollars used to
grow the prison industrial slave complex (PISC) redirected to the communities.

Without going into the recent political presidential acrobats, we do want to
acknowledge we feel a stronger need then ever to make it known that the people
in prison struggles will not be pushed to the back burner in the muddy waters
of trying to make people feel good about their party politics.

In the spirit of Abolition on the historical dates of August 21st and September
9th, 2021 organizers must highlight prisoners' historical struggles, and the
current political struggles to dismantle the prison industrial slave complex.
Jailhouse lawyers Speak is calling for mass outside demonstrations.

A few states may already have specific ongoing campaigns that directly speak
to decarceration or closing down a prison or jail. Efforts should be made to
network to boost those campaigns on these dates at the recommended locations.

With everyone working across the nation on the same days, this would magnify
our struggle for humanity and highlight specific state related campaigns.
These "Shut'em Down" demonstrations should serve as a wake up call to every
person in this nation that the current jailing path does not work and it's
time to end it.

In the days leading up to the Shut'em Down demonstrations, we will post
locations of planned Abolition demonstrations and endorsements of these
events on our website:

If you know you will be holding a "Shut'em Down" demo or simply would like
to be listed as an endorser, email us at outthemud.jls@protonmail.com

Offical SHUT'EM DOWN t-shirts and hoodies are now available to order in
time to ship for demonstration dates. Go to: jlsrebelwear.com