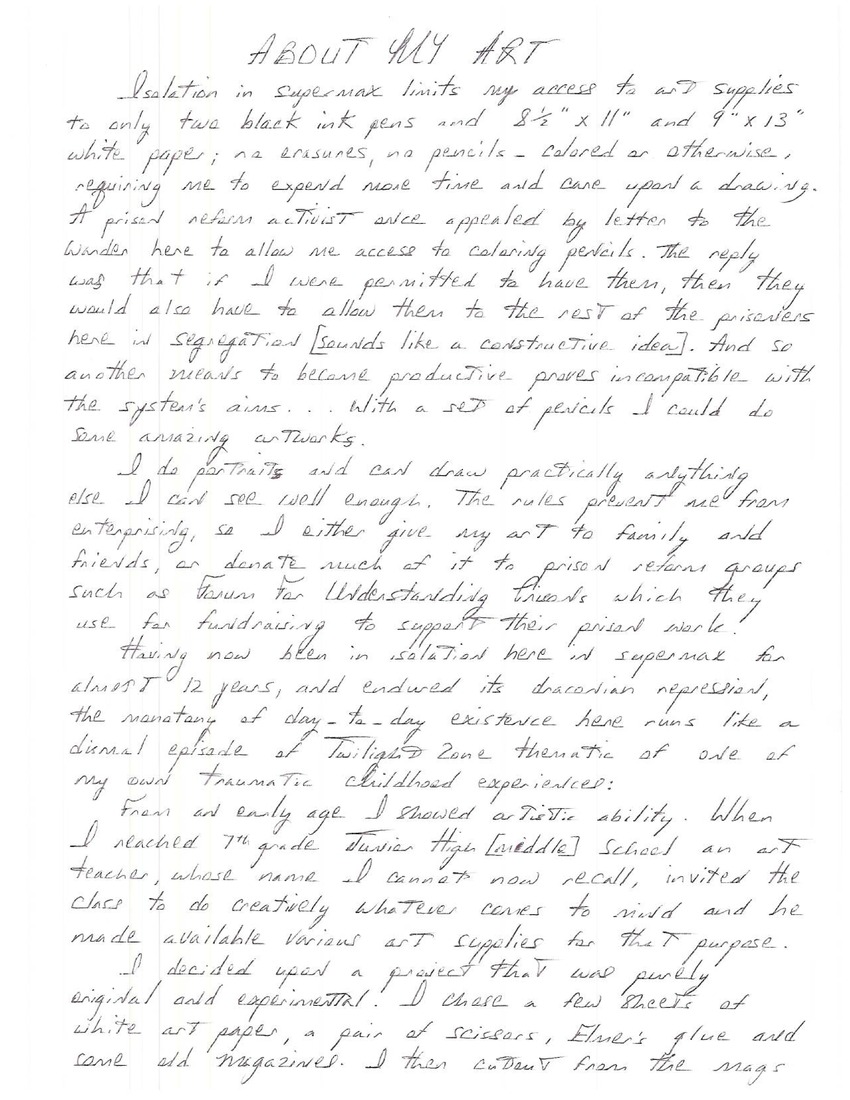 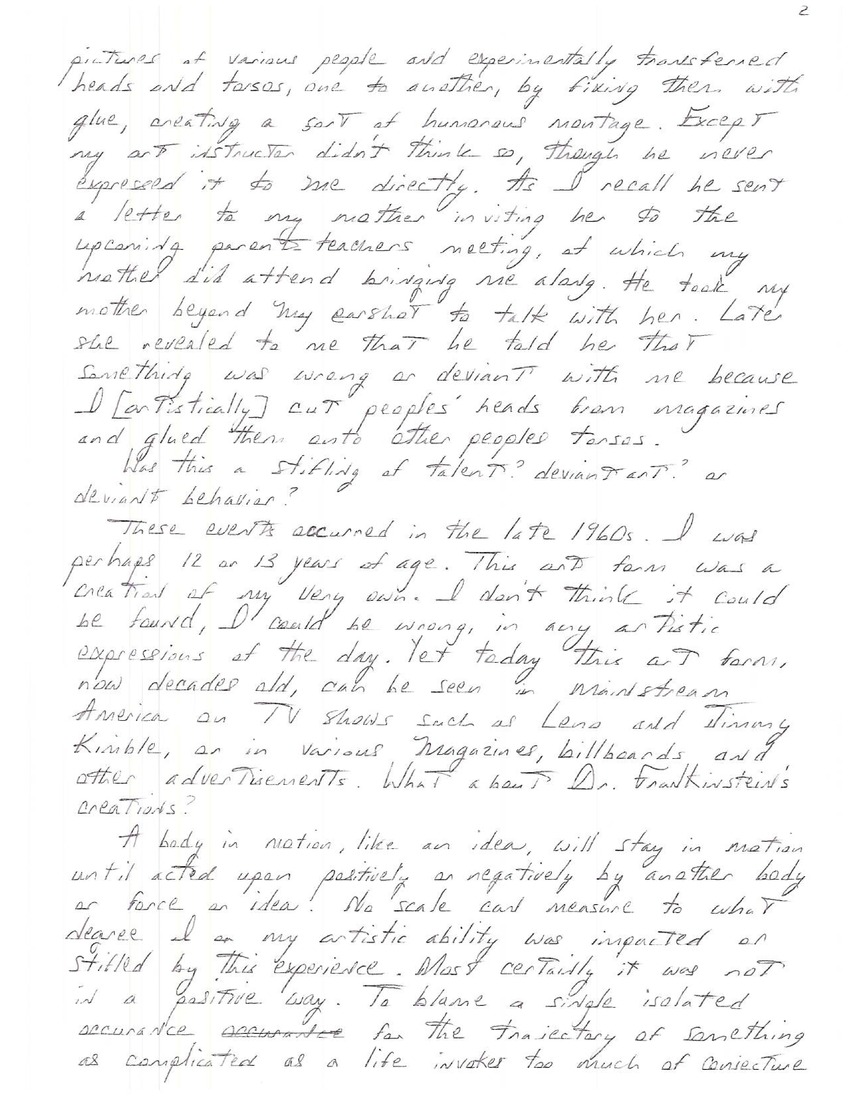 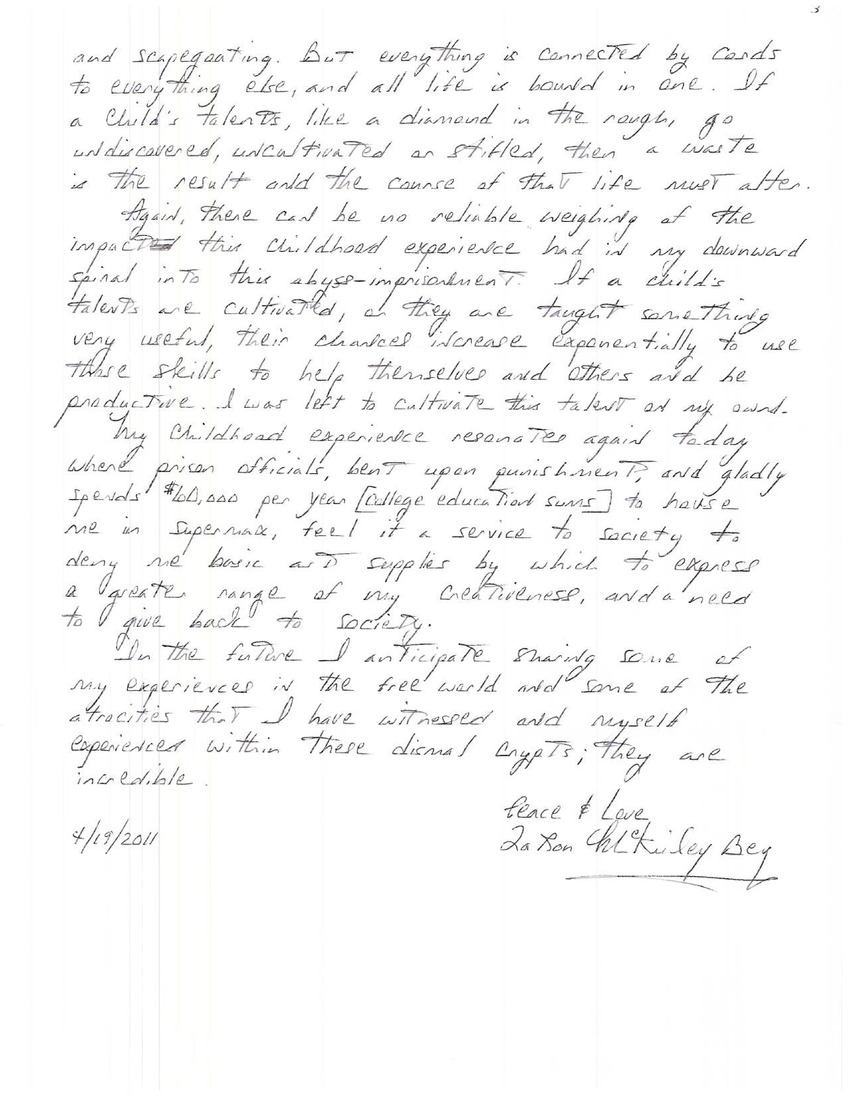 Isolation in supermax limits my access to art supplies to only two black ink pens and 8 and a half inches x 11 inches and 9 x 13 inch white paper. No erasures, no pencils - coloured or otherwise, requiring me to expend more time and care upon a drawing.

A prison reform activist once appealed by letter to the warden here to allow me access to colouring pencils. The reply was that if I were permitted to have them, then they would also have to allow them to the rest of the prisoners here in segregation(sounds like a constructive idea). And so another means to become productive proves incompatible with the systems aims......with a set of pencils I could do some amazing artworks.

I do portraits and can draw practically anything else I can see well enough. The rules prevent me from enterprising, so I either give my art to family and friends, or donate much of it to prison reforms groups such are Forum(?) for Understanding Prisons which they use for fundraising to support their prison work.

Having now been in isolation here in supermax for almost 12 years, and endured its draconian repression, the monotomy of day-to-day existence here runs like a dismal episode of Twilight Zone thematic of one of my own traumatic childhood experiences.

From an early age I showed artistic ability. When I reached 7th grade Junior High (middle) school an art teacher, whose name I cannot now recall, invited the class to do creatively whatever came to mind and he made available various art supplies for that purpose.

I decided upon a project that was purely original and experimental. I chose a few sheets of white art paper, a pair of scissors, Elmer's glue and some old magazines. I then cut out from the mags pictures of various people and experimentally transferred heads and torsos, one to another, by fixing then with glue, creating a sort of humorous montage. Except my art instructor didnt think so , though he never expressed it to me directly. As I recall he sent a letter to my mother inviting her to go to the upcoming parents-teachers meeting, at which my mother did attend bringing me along. He took, my mother beyond my earshot to talk with her. Later she revealed to me that he told her that something was wrong or deviant with me because I (artistically) cut peoples heads from magazines and glued them onto other peoples torsos.
Was this a stifling of talent? deviant art? or deviant behaviour?

These events occured in the late 1960's. I was perhaps 12 or 13 years of age. This art form was a creation of my very own. I dont think it could be found, I could be wrong, in any artistic expressions of the day. Yet today this art form, now decades old, can be seen in mainstream America on tv shows such as Leno and Jimmy Kimible, or in various magazines, billboards and other advertisements. What about Dr Frankenstein's creations?

A body in motion, like an idea, will stay in motion until acted upon positively or negatively by another body or force or idea. No scale can measure to what degree I or my artistic ability was impacted or stifled by this experience. Most certainally it was not in a positive way. To blame a single isolated occurance for the trajectory of something as complicated as a life invokes too much of conjecture and scapegoating. But everything is connected by cords to everything else, and all life is bound in one. If a child's talents, like a diamond in the rough, go undiscovered, uncultivated or stifled, then a waste is the result and the course of that life must alter.

Again, there can be no reliable weighing of the impact this childhood experience had in my downward spiral into this abyss-imprisonment. If a child's talents are cultivated or they are taught something very useful, their chances increas exponentially to use their skills to help themselves and others and be productive. I was left to cultivate this talent on my own.

My childhood experience resonates again today where prison officials, bent upon punishment, and gladly spends $60,000 per year(college education sums) to house me in supermax, feel it a service to society to deny me basic art supplies by which to express a greater range of my creativeness, and a need to give back to society.

In the future I anticipate sharing some of my experiences in the free world and some of the atrocities that I have witnessed and myself experienced within these dismal crypts; they are incredible.

Hey LaRon great blog babe some of this art teachers remind me how they say about some these music critics eg that they dont have much talent but wish they did so they try put down ppl who do whether consciously or subconsciously. It must been harsh that happening to you when you were young but if is part of the reason why u ended up not learning art formally but done it self taught then is like a positive in it too cos your art rocks. I think if get too much official learning can stop the flow of creativity and as you seem to flow like tao could have ended up better off. I start think the only thing i done right in this life was mess up mi formal educations but i seem to have picked up a few things here and there. I did do some school college and even uni but never stuck at it long prefering to also be autodicdatic /self taught. I always thought Bob Marley lyric - building church and university trying to brainwash educate i made a lot of sense. Its amazing how you managed rehabilitate yourself so much despite being in a place designed to not allow that. I replying your letter u rite mi address not changed. Stay Blessed, Michelle