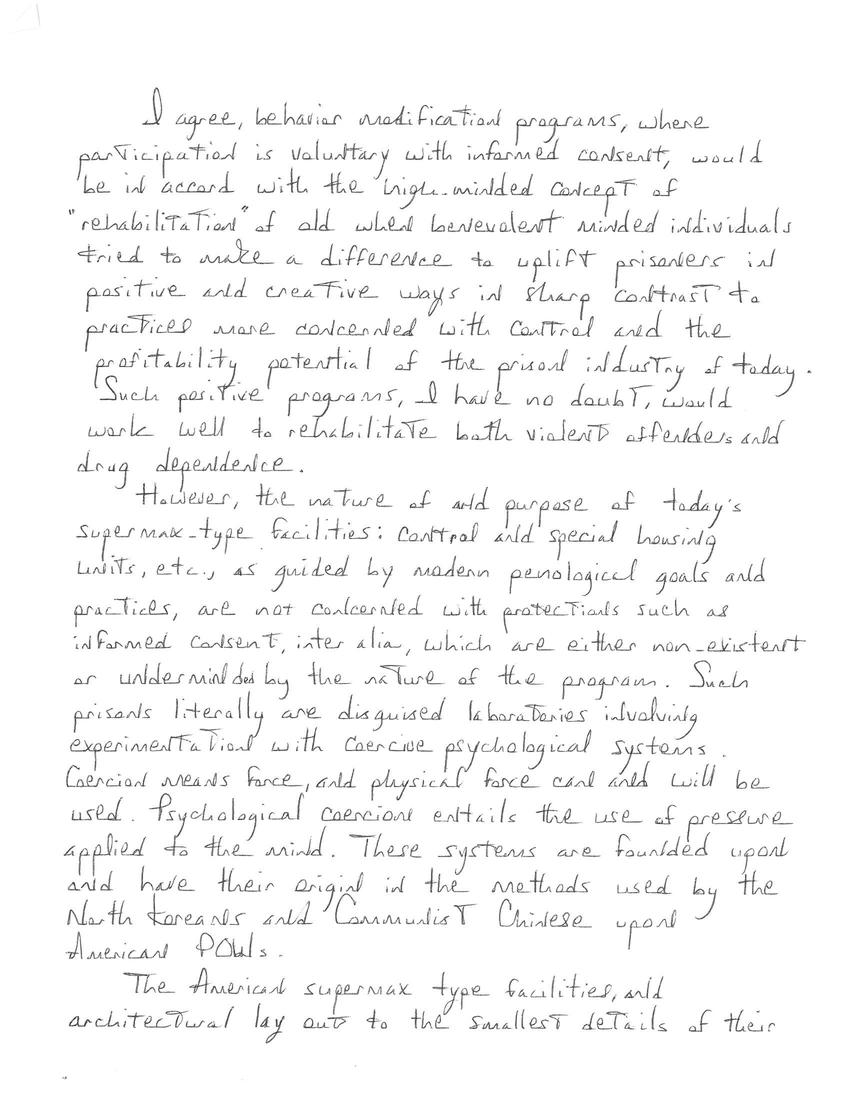 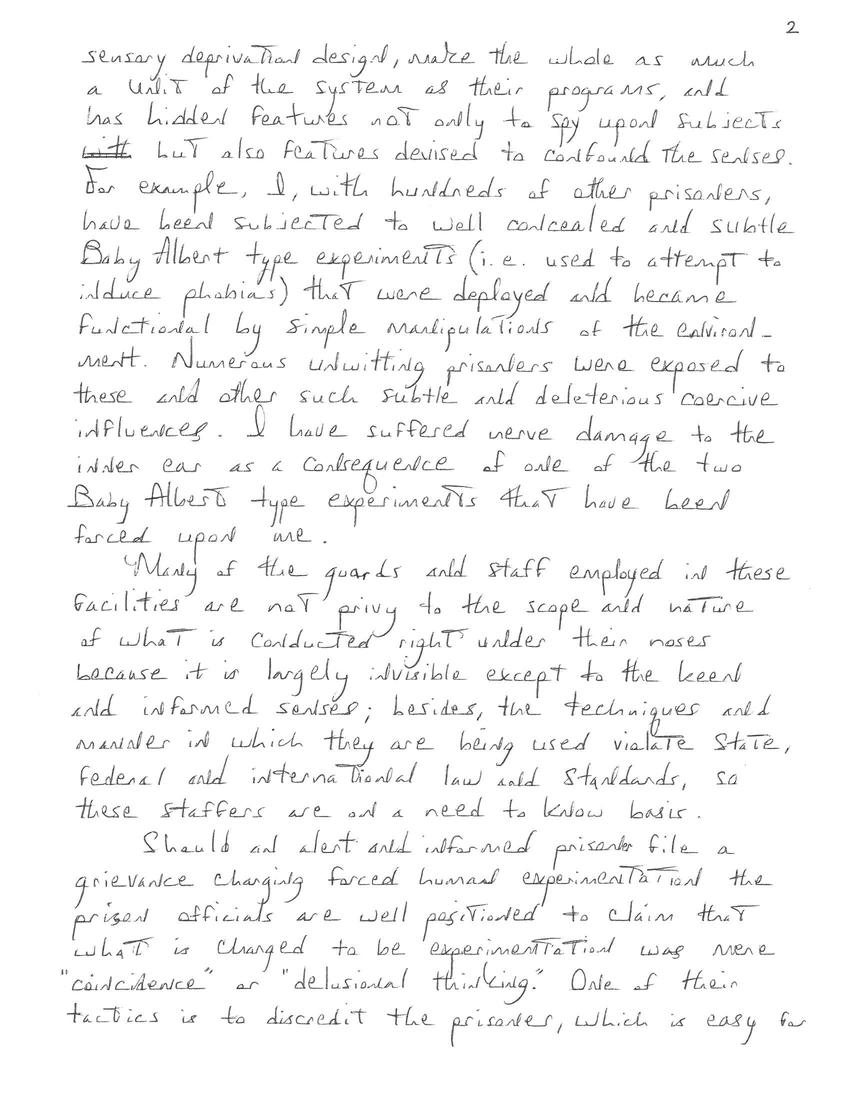 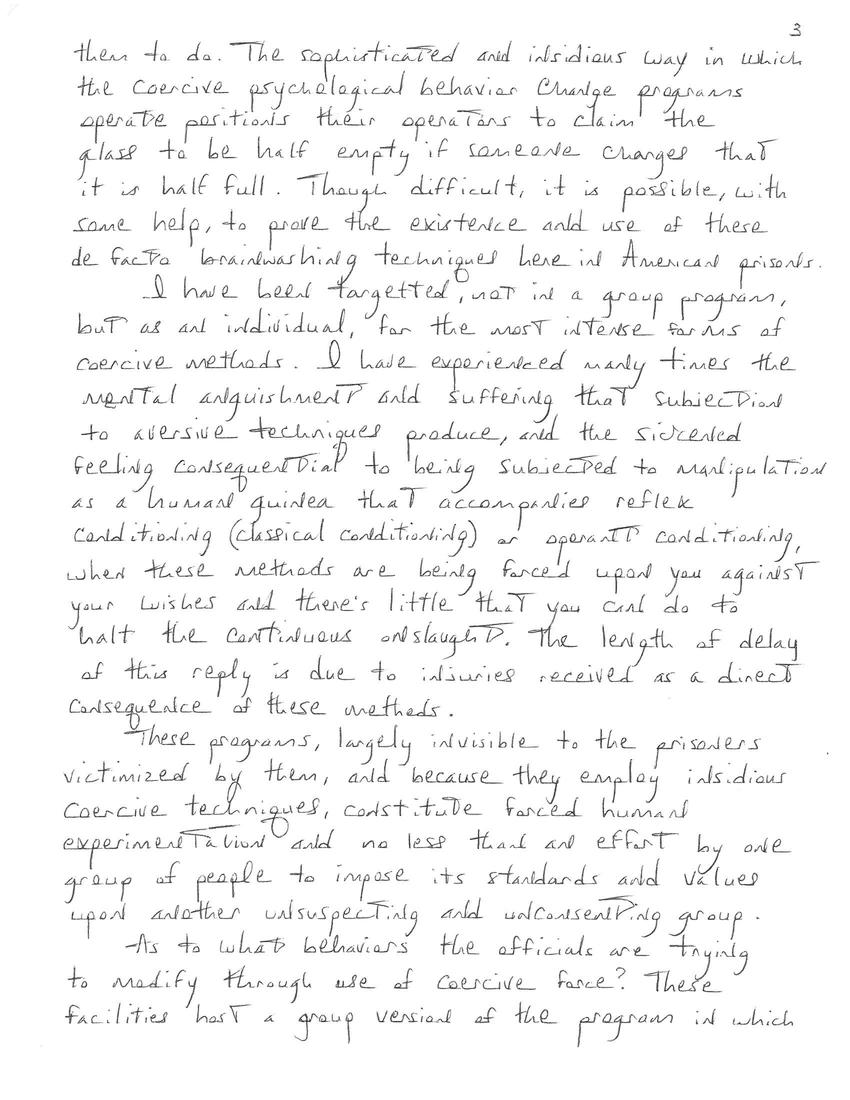 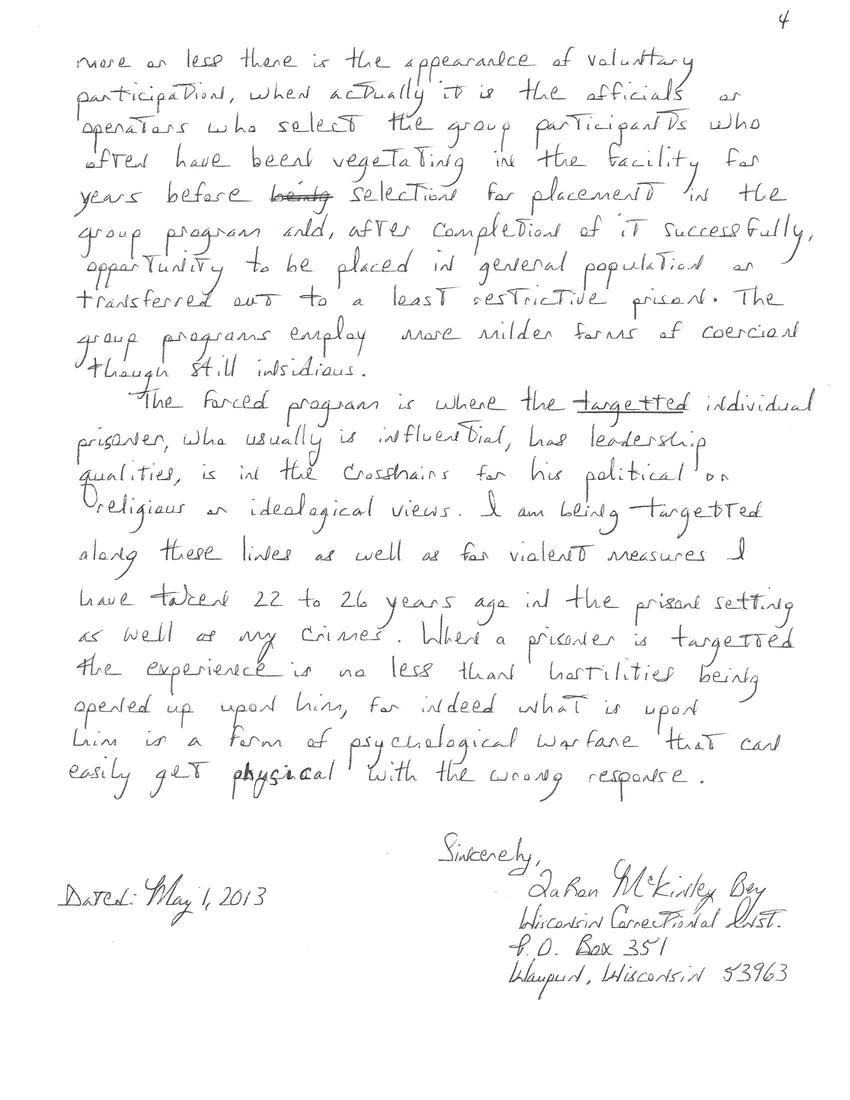 I agree, behavior modification programs, where participatation is voluntary with informed consent, would be in accord with the high minded concept of "rehabilitation" of old when benevolent minded individuals tried to make a difference to uplift prisoners in positive and creative ways in sharp contrast to practices more concerned with control and the profitability potential of the prison industry of today. Such positve programs, I have no doubt, would work well to rehabilitate both violent offenders and drug dependence.

However, the nature of and purpose of today's super max-type facilities: control and special housing units, etc., as guided by modern penological goals and practices, are not concerned with protections such as informed consent, [illegible], which are either non-existent or underminded by the nature of the program. Such prisons literally are disguised laboratories involving experimentation with coercive psychological systems. Coercion means force, and physical force can and will be used. Pschological coercion entails the use of pressure applied to the mind. These systems are founded upon and heve their origin in the methods used by the North Koreans and Communist Chinese upon American POW's.

The American supermax type facilities, and architectual layouts to the smallest details of their sensory deprivation design, make the whole as much a unit of the system as their programs, and has hidden features not only to spy upon subjects but also features devised to confound the senses. For example, I, with hundreds of other prisoners, have been subjected to well concealed and subtle Baby Albert type experiments (i.e. used to attempt to induce phobias) that were deployed and became functional by simple manipulations of the environment. Numerous unwitting prisoners were exposed to these and other such subtle and deleterious coercive influences. I have suffered nerve damage to the inner ear as a consequence of one of the two Baby Albert type experiments that have been forced upon me.

Many of the guards and staff employed in these facilities are not privy to the scope and nature of what is conducted right under their noses because it is largely invisible except to the keen and informed senses; besides, the techniques and manner in which they are being used violate state, federal and international law and standards, so these staffers are on a need to know basis.

Should an alert and informed prisoner file a grievance charging forced human experimentation the prison officials are well positioned to claim that what is charged to be experimentation was mere "coincidence" or "delusional thinking." One of their tactics is to discredit the prisoner, which is easy for them to do. The sophisticated and insidious way in which the coercive psychological behavior change programs operate positions their operators to claim the glass to be half empty if someone charges that it is half full. Though difficult, it is possible, with some help, to prove the existence and use of these defects brainwashing techniques here in American prisons.

I have been targeted, not in a group program, but as an individual, for the most intense forms of coercive methods. I have experienced many times the mental anguishment and suffering that subjectional to aversive techniques produce, and the sickened feeling consequential to being subjected to manipulation as a human guinea that accompanies reflex conditioning (classical conditioning) or [illegible] conditioning, when these methods are being forced upon you against your wishes and there's little that you can do to halt the continous onslaught. The length of delay of this reply is due to injuries received as a direct consequence of these methods.

These programs, largely invisible to the prisoners victimized by them, and because they employ insidious coercive techniques, consitute forced human experimentation and no less than an effort by one group of people to impose its standards and values upon another unsuspecting and unconsenting group.

As to what behaviors the officials are trying to modify through use of coercive force? These facilities host a group version of the program in which more or less there is the appearance of voluntary participation, when actually it is the officials or operators who select the group participants who often have been vegetating in the facility for years before selection for placement in the group program and, after completion of it successfully, opportunity to be placed in general population or transferred out to a least restrictive prison. The group programs employ more milder forms of coercion though still insidious.

The forced program is where the targeted individual prisoner, who usually is influential, has leadership qualities, is in the crosshairs for his political or religious or idealogical views. I am being targeted along these lines as well as for violent measures I have taken 22 to 26 years ago in the prison setting as well as my crimes. When a prisoner is targeted the experience is no less than hostilites being opened up upon him, for indeed what is upon him is a form of psychological warfare that can easily get physical with the wrong response.

Shalom LaRon I hope things will get easier for you and you will get a clearer perspective how to deal with your current situation...im real sorry have to be the bearer of wat u may view as bad tidings, i hope u will continue to find a way with ALLAH guidance i cant say when i will be able write again at the moment, maybe soon maybe far maybe never only Jah knows. as u know i go tru some similar issues even tho i aint in jail i know is worse there so i cud be getting confused if so i hope u forgive me and i be in touch soon if and when I feel Christ is guide me say that is the case...but in the meantime a couple of things that been bothering me i have continued to meditate on more the last couple of weeks...mi health is low again i think i just too ksome more poison or whatever to overcome and test for solomon cos someone impersonated orion lucky Jah is like kinda hint to me before that cud happen and he was no longer i nthat exact form i kinda knew from the syncornicitys i had seen but i thought more it was gonna be someone else i knew who had permision do that....so sorry if i cant explain, but main concerns is how u said some things are unforgiveable if u not practising forgivenss that cud be why Jah is not too keen me write u atm i dont get how u said before u had not one wicked thread of fibre left in u if u not strictly walking Jah path unless u had access to stuff u shouldnt or borrowed and didnt want give back or misuse or something?
if u r now practing forgivness maybe its like a time delay. also how when i said to u before dont worry for satan cos is on Jah side now u said satan couldnt hear u, is be same as any angel or human that has permission to help intervene on day of judgement wud need permisison from allah, i know cos i prayed for satan forgivenss and that Jah wud take satan back which i thought likely how i read the scriptures anyway is what ALLAH want, maybe u need to ponder on that...this new document u sent about i cant remember some bullshit motor cyle club i seen 2 fake muthafuckahs on utube do that i cud be wrong but only ALLAH is Lord of SOvernighty all this stuff about court too i not sure if we allowed acknowledge these courts it some kind of shirk but i cud be wrong, i think jah is gonna use these cases and nicaragua case who took cia stuff court for terrorism and case other day uk parliment acknowledged someting about kenya ma mau freedom fighters but not took responisiblity or offeer any recompensation ...i cud be wrong but like i mentoned before Jah has plan take the system whole if enuf ppl want that a new goverment, maybe Jah has plans for you if you have leadership capabiliity and is part of why u going tru these tribulations like u said jihad is ordained for us, some of this is part karma too and also what we may have agreed to do to help fight against the 12 that Jesus said Judas wud not be under those muthafuckahrs authority any more is i think how i said i connected with kuluminati and HIM 144,000 sleeping ones is do with this twin flame thing too and someone is trying keep me from mi man it aint happening we did do stuff like this i think but on a double agent spy thing that why quran says ALLAH is forgive who he wants for anyting and readjust thier deeds and stuff see cos we had a coveant made up off different elements i dont remember it exactly but Jah is showing me im like a witness maybe u r too and they try stop u remember i dont know but i hope u work it out and insha allah we be in contact again soon. Jah Bless Lion of Yuhudah and ALL be like returning and mainfesting soon take official authority i think , most ppl are gonna think its the antichrist but is hopefully time to repent and see is Christ is kind anyone who forgives and stand sup for truth and justice He already done most of it for us we just stand up walk in footsteps we can all make it together still maybe if not ones on the list go the new creation now but i think will continue mix of both and ones standing in the breach like between the worlds and in and out the matrix.