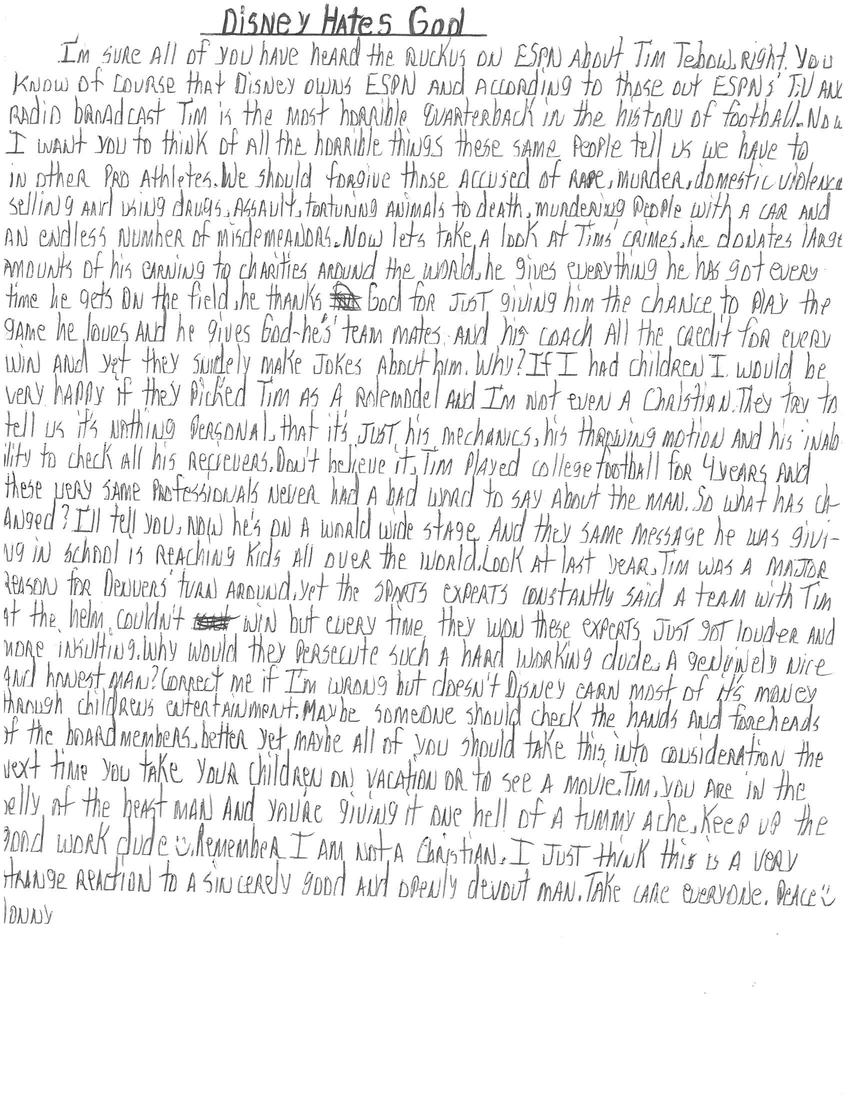 i'm sure all of you have heard the ruckus on ESPN about Tim Tebow, right. You know of course that Disney owns ESPN and according to those out ESPN's TV and radio broadcast Tim is the most horrible quarterback in the history of football. Now I want you to think of all the horrible things these same people tell us we have to in other Pro Athletes. We should forgive those accused of rape, murder, domestic violence selling and using drugs, assault, torturing animals to death, murdering people with a car and an endless number of misdemeanors. Now let's take a look at tim's crimes, he donates large amouts of hs earning to charities around the world, he gives everythuing he has got every time he gets on the field, he thanks god for just giving him the chance to play the game he loves and he gives God - he's team mates and his coach all the credit for every win and yet they snidely make jokes about him. Why? If I had children I would be very happy if they picked Tim as a rolemodel and I'm not even a Christian. They try to tell us it's nothing personal, that it's just his mechanics, his throwong motion and his inability to check all his receivers. Dont believe it, tim played college football for 4 years and these very same professionals never had a bad word to say about the man. So what has changed I'll tell you, now he's on a world wide stage, and they same message he was giving in school is reaching kids all over the world. look at last year. Tim was a major reason for denvers turn around, yet the sports experts contantly said a team with Tim at the helm, couldn't win but every time they won these experts just got louder and more insulting. Why would they percecute such a hard working duse. A genuinely nice and honest man? Correct me if I'm wrong but doesn't Sisney earn most of it's money through childrens entertainment. Maybe someone should check the hands and foreheads if the boardmembers, better yet maybe all of you should take this into consideration the next time you take your children on vacation or to see a movie. Tim, you are in the belly of the best man and you're giving it one hell ofa tummy ache, keep up the road work dude. Remember I am not a christian, I just think this is a very strange reaction to a sincrely good and openly devout man. Take care everyone. Peace
Lonny

Thanks for writing! I finished the transcription for your post.
donny: This is william. U wrote me in SCI Frackville and sent me a pretty good story. I wrote back and told you I would keep in touch after I am released so I am. But I sent u a few stories a few months ago and didn't get an answer. Just making sure ure OK.