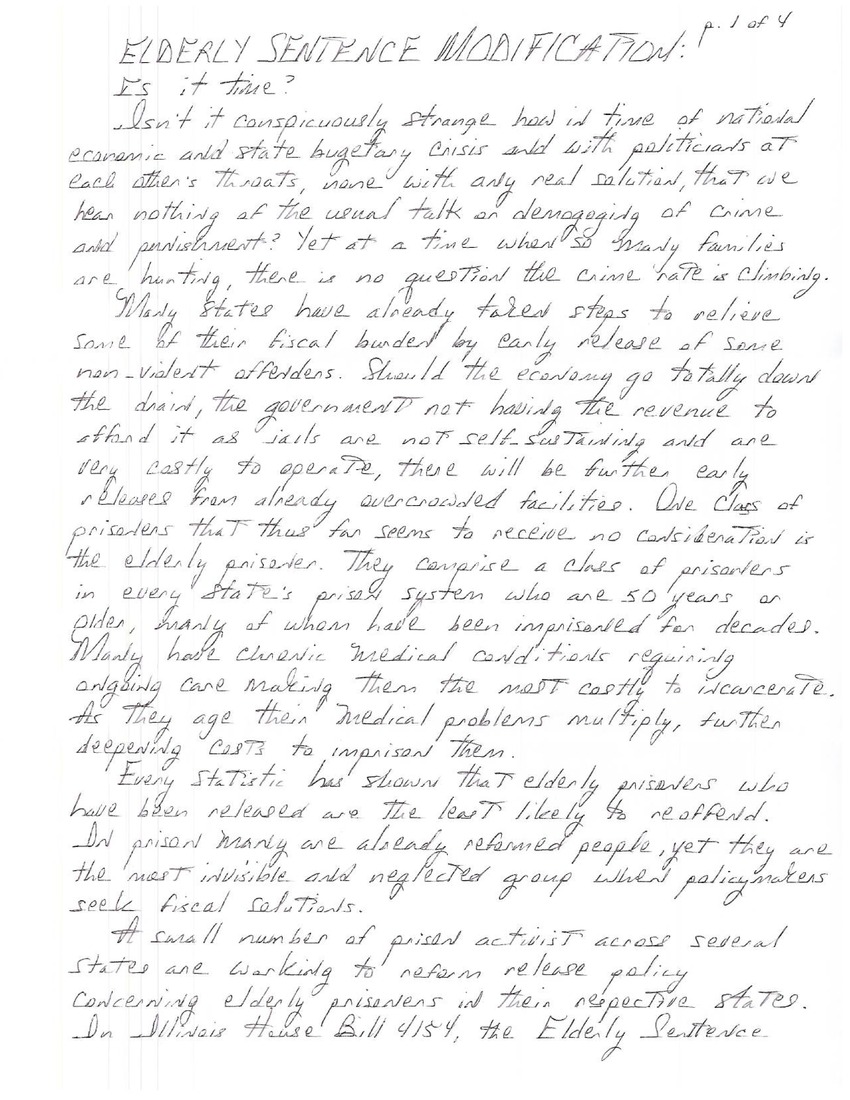 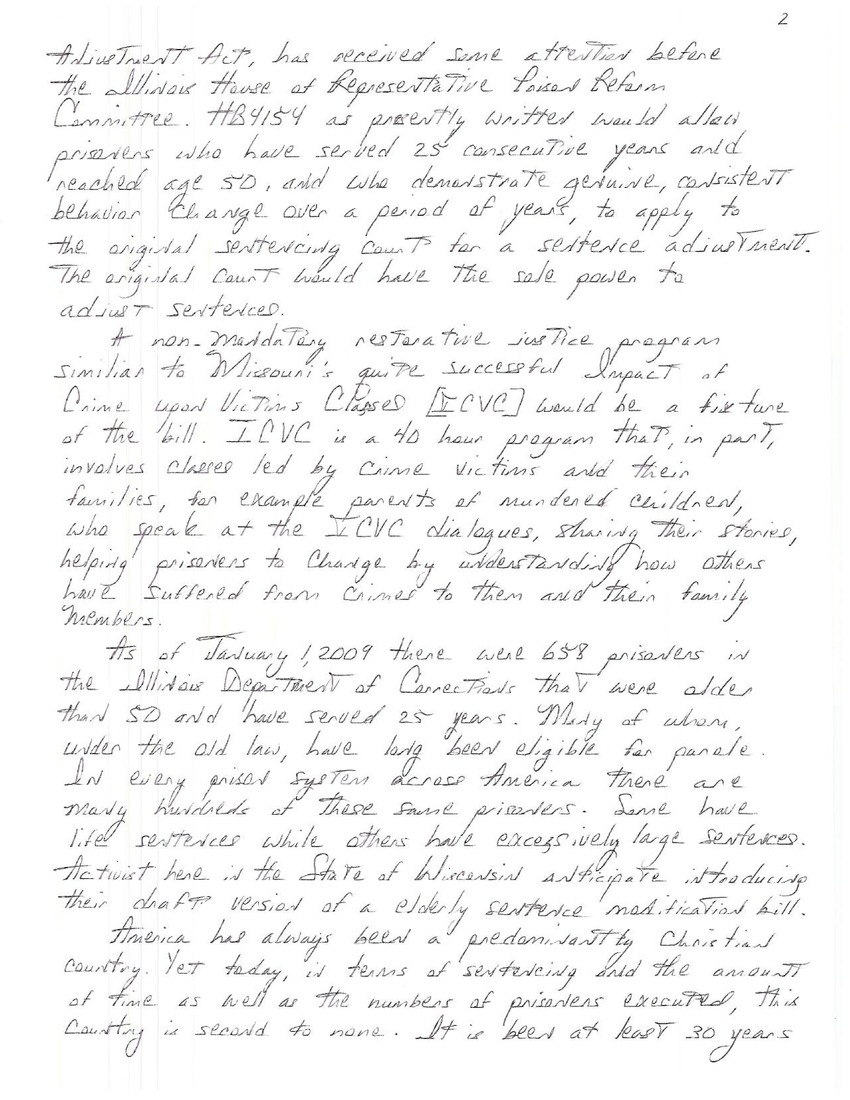 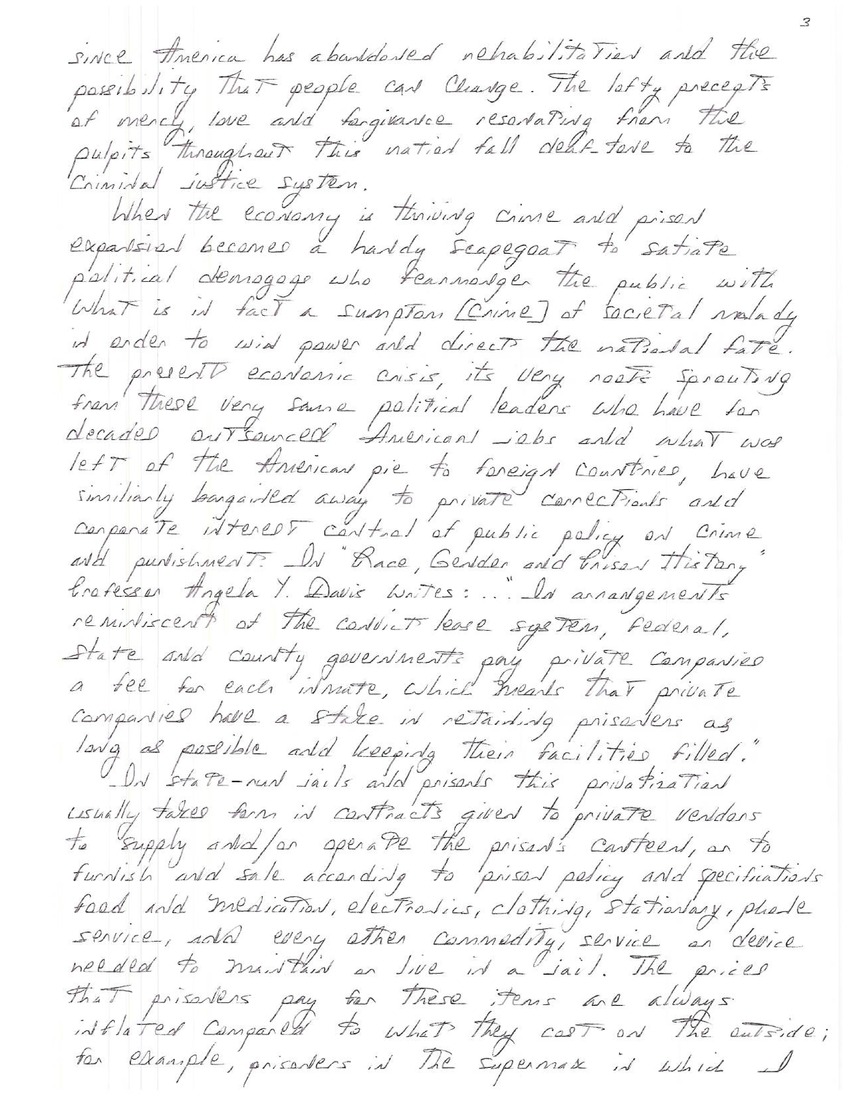 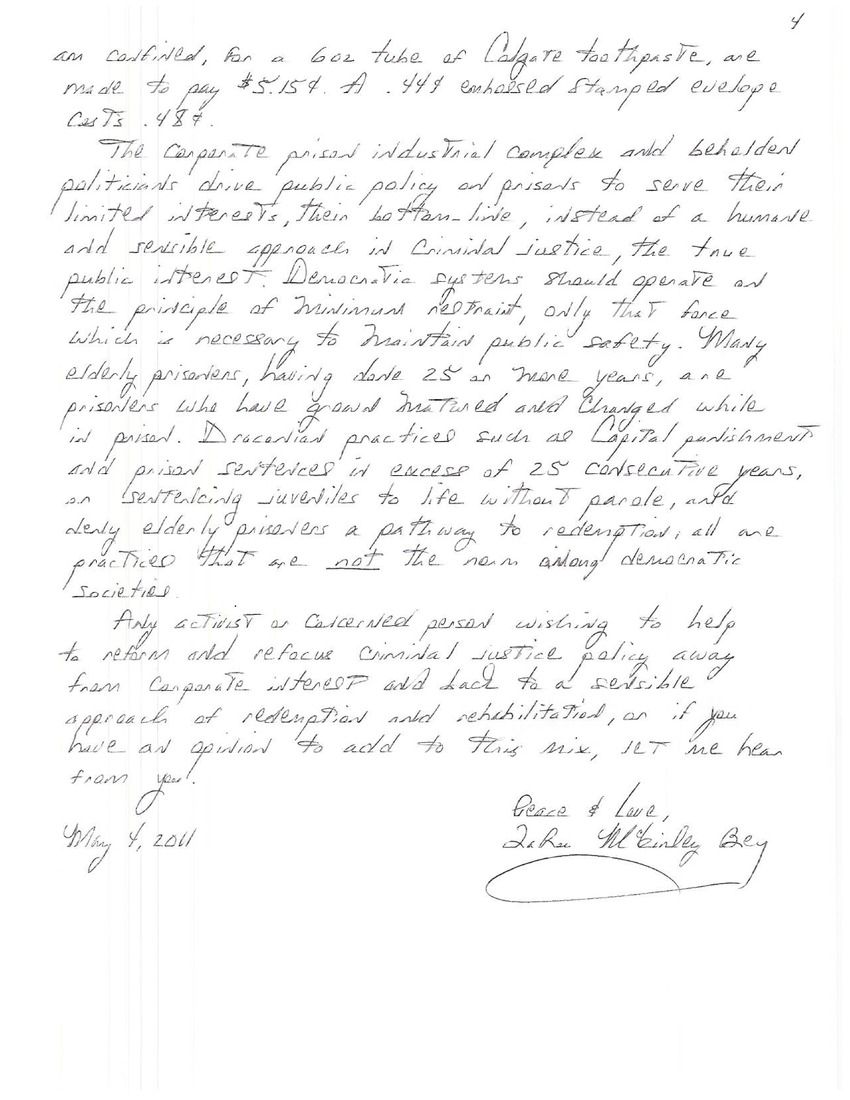 Isnt it conspicuously strange how in time of national, economic and state budetary crisis and with politicians at each others throats, none with any real solutions; that we hear nothing of the usual talk on demogoging of crime and punishment. Yet at a time when so many familys are hurting, there is no question the crime rate is climbing.
Many states have already taken steps to relieve some of their fiscal burden by early release of some non-violent offenders. Should the economy go totally down the drain, the government not having the revenue to afford it as jails are not self-sustaining and are very costly to operate, there will be further early releases from already overcrowded facilities.

One class of prisoners that thus far seem to receive no consideration is the elderly prisoner. They comprise a class of prisoners in every state's prison system who are 50 years or older, many of whom have been imprisoned for decades. Many have chronic medical conditions requiring ongoing care making them the most costly to incarcerate. As they age their medical problems multiply, further deepening costs to imprison them.

Every statistic has shown that elderly prisoners who have been released are the least likely to reoffend. In prison many are already reformed people, yet they are the most invisible and neglected group when policymakers seek fiscal solutions.

A small number of prison activists across several states are working to reform release policy concerning elderly prisoners in their respective states. In Illinois House Bill 4154, the Elderly Scentence Advisement Act has received some attention before the Illinois House of Representative Prison Reform Committee. HB4154 as presently written would allow prisoners who have served 25 consecutive years and reached age 50, and who demonstrate genuine, consistent behaviour change over a period of years, to apply to the original sentencing courts for a sentence adjustment. The original court would have the sole power to adjust sentences.

A non-mandatory restorative justice program similar to Missouri's quite sucessful impact of Crime upon Victims Clases(sp?) [ICVC] is a 40 hour program that, in part, involves classes led by crime victims and their families, for example parents of murdered children, who speak at the ICVC dialogues, sharing their stories, helping prisoners to change by understanding how others have suffered from crimes to them and their family members.

As of January 1, 2009 there were 658 prisoners in the Illinois Department of Corrections that were older than 50 and have served 25 years. Many of whom, under the old law, have long been eligible for parole. In every prison system across America there are many hundreds of these same prisoners. Some have life sentences while others have excessively large sentences. Activists here in the State of Wisconsin anticipate introducing their draft version of a elderly sentence modification bill.

America has always been a predominately christian country. Yet today, in terms of sentencing and the amount of time as well as the number of prisoners executed, this country is second to none. It has been at least 30 years since America has abandoned rehabilitation and the possibility that people can change. The lofty precepts of mercy love and forgiveness resonating from the pulpits throughtout this nation fall deaf-tone to the criminal justice system.

When the economy is thriving crime and prison expansion becomes a handy scapegoat to satiate political demogogs who fearmonger the public with what is in fact a sympton(crime) of societal malady in order to win power and direct the national fate. The present economic crisis, its very roots sprouting from these very same political leaders who have for decades out-sourced american jobs and what was left of the american pie to foreign countries, have similarly been given away to private corrections and corporate interest control of public policy on crime and punishment. In "RAce, Gender and Prison History" Professor Angela Y Davis writes : .."In arrangements reminiscent of the convicts lease system, federal, state and county government pay private companys a fee for each inmate, which means that private companies have a stake in retaining prisoners as long as possible and keeping their facilities filled."
In state-run-jails and prisons this privatisation usually takes form in contracts given to private vendors to supply and/or operate the prison's canteen, or to furnish and sale according to prison policy and specifications food and medication, electronics, clothing, stationary, phone service, and every other community service or device needed to maintain and live in jail. The prices that prisoners pay for these items are always inflated compared to what they cost on the outside. For example, prisoners in the supermax in which I am confined, for a 6oz tube of colgate toothpaste, are made to pay $5.15. A 44 cent embossed stamped envelope costs 48 cents.

The corporate prison industrial complex and beholden politicians drive public policy and prisons to serve their limited interests, their bottom-line, instead of a humane and sensible approach in criminal justice, the true public interest.

Democratic systems should operate on the principle of minimal restraint, only that force which is necessary to maintain public safety. Many elderly prisoners, having done 25 or more years, are prisoners who have grown matured and changed while in prison. Draconian practices such as Capital punishment and prison sentences in excess of 25 consecutive years, like sentencing juveniles to life without parole, and deny elderly prisoners a pathway to redemption, all are practices that are not the norm among democratic societies.

Any activist or concerned person wishing to help to reform and refocus criminal justice policy away from corporate interest and back to a sensible approach of redemption and rehabilitation, or if you have an opinion to add to this mix, let me hear from you.

Shalom comrade laron mibruthah in Christ i got couple more letters fromyou i been thru a few like tribulaitons found out that fabian is a fake its cool i had to get some info of him and maybe also is do with this 8 year old jamaican girl that was shot recent or maybe was 8 ppl arrested....yeah i wud have thought insha allah your sentence be modified soon or the script gwan flip to freedom i see lot of good signs sorry iaint got much time left on line i exposed this fake solomon in the gambia on youtube last night had bit inteference gone worse mi pc but its cool is lucky quran is say how they disguise ppls thrones and stuff i is only want ride with orion at the moment is who i trust along with you and oscar bageera sos sirius snake khat is who i trust totally these other ones is being deleted frommi mind...i just listening this girl 777aej on youtube i wanted take notes i used watch her in oz even tho she is white and the pharisee fake rastafari was saying we all hated by jah lol he was talk about himself is when i wrote u about the scorpion bit me in park...she said then and said again now scorpions is bad i told u that but said i knew u wasnt...is do with the moon ppl who are usually dodgy too and the 2 witnesses who change and alter disguise themselfs angels on foot who volutarily had drop their wings i sure they get them back is do with rahab the harlot who hide them....is like this the moon is a harsh mistress book i read once a machine computer call mike is wake up help the revoltuionarys overthrow the system.....heres a quick bit out mi journal from when i was in oz may help increase your faith lol be tru the roof soon....she saying that video too about how they do with walls of jericho coming down
ok this mi journal entry just before it bit of a dream - in mi dream last night was at house, granny martins but she was out, some other fam was there, was apple pie in bottom of oven....appel appeal apprael i cant spell it is maybe like clothing i wasnt actually thinking of that anyway so maybe i got it twisted lol forgive me fam:-) i meant write app-el like applications of el u know how have like apps on thiese mobile phones probably even radios and stuff these days....then this journal entry watching some film a hybrid vampire called michael corvin(?) some girl rescued him said never been hybrid cud have bare power(tho power only cvome from allah tru kristos) some devil tracked him got thing in his heart gave him heart attack. then a wanted thing came up on the tv in bar where he eating starts throwing up having heart attack.michael wears a celtic cross. then the devil comes to saline says last of yourwrtetched family. dead or alive u will give me what i want. that girl say to michael i see that cross long ago when i was a child but it was open. she says to find the meaning need go see andres(cud be russian guy of mi fb) he lives in a building with a celtic cross on used b we a monastry now is more like a prison. that vampire tells her that the vampire they think is source, victor, was not the 1st vampire but marcus was and his twin brother created some beasts bad vampires....not sure mi internet gwan cut out i leave it at that when i get paid monday i off ireland a week or few days what i can afford jah is say not worry share mi money he provides tru govt with these muthafuckash take the piss keep tell me charity covers multitude of sins im already ciovered by blud christ girl on this video too says i am forgiven already been judged chastised i see signs elsewhere too probably same as u i gonna send you that book i got mi softcover and brand new and maybe can get the glasses too and possibly couple other things mi social worker gave me form i can get back 170 quid towards the holoiday may have wait get reinbursed but i can definetely send more than just the usual thanks to our creator who provides for us sorry i wasted it on wrong causes but its cool probably buying slaves back like a game like in bhagetia gita cos obviously is all belong to allah ppl that dont want to maybe they get go with their phantasy ficiton but for us bagera be blue eyed melcheditz eejits want flip him to blue eyed willie lynch he drive them out to the other sun to explode then bail out he eats liek a horse too big too fail insha allah jah bless