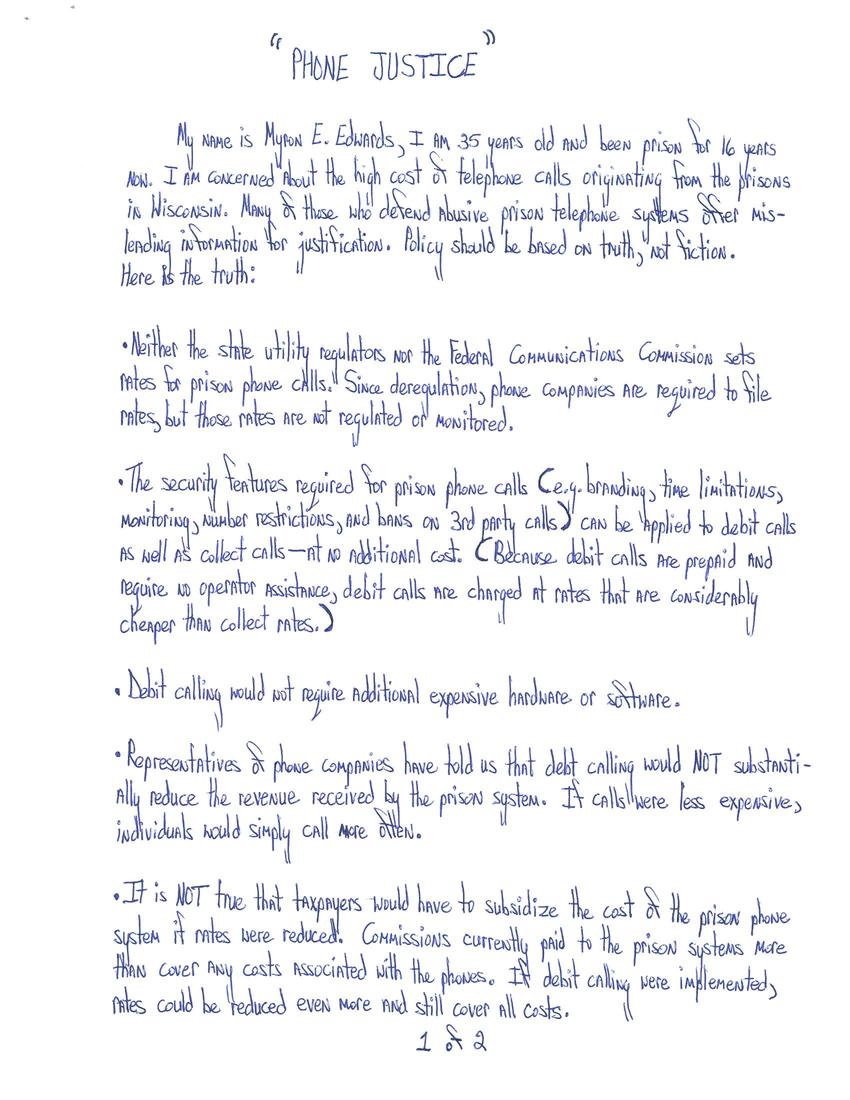 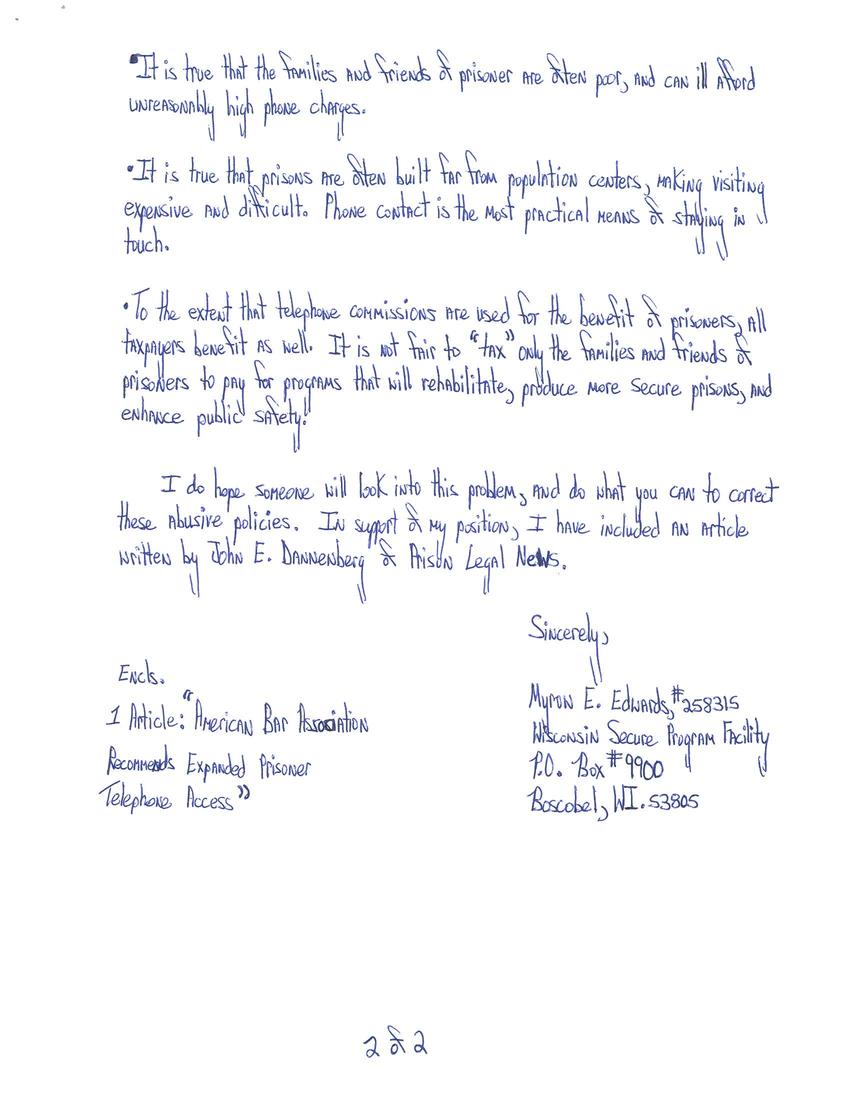 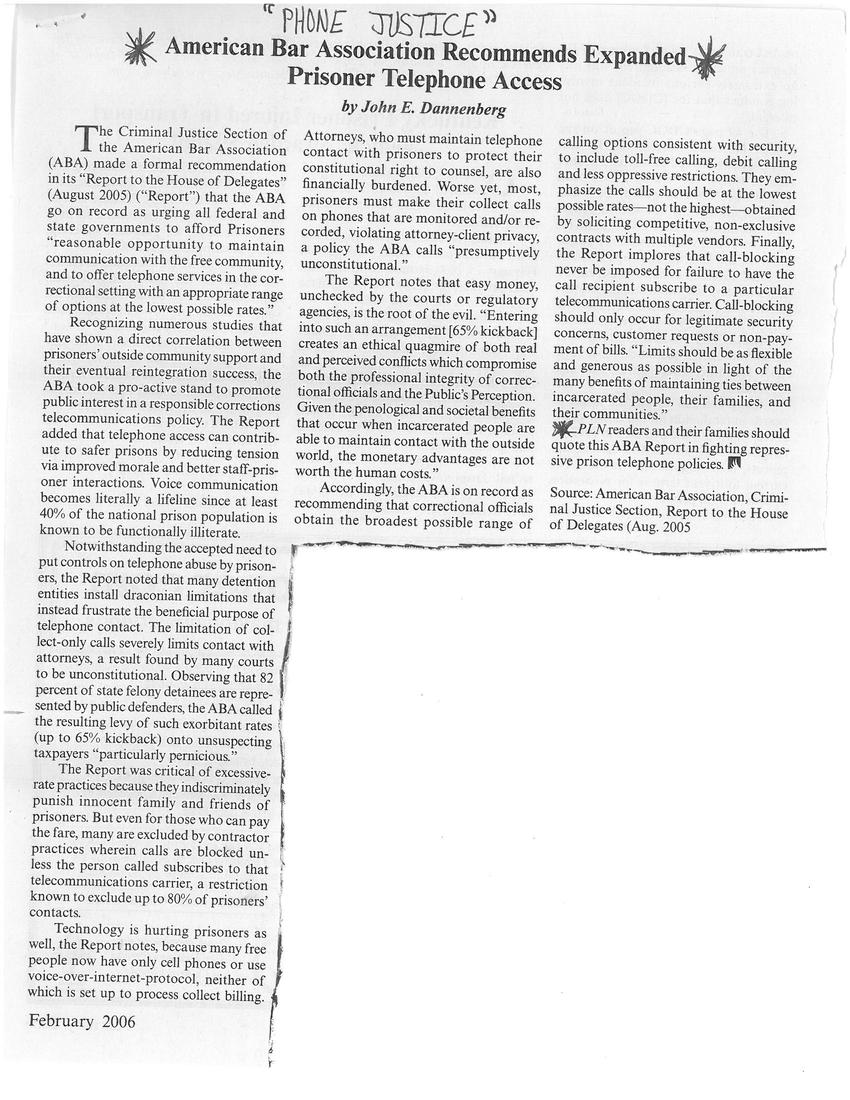 My name is Myron E. Edwards, I am 35 years old and been in prison for 16 years now. I am concerned about the high cost of telephone calls originating from the prisons in Wisconsin. Many of these who defend abusive prison telephone systems offer mis-leading information for justificcation. policy should be base don truth, not fiction. Here is the truth:

Neither the state utility regulators nor the Federal Communications Commision sets rates for prison phone calls. Since deregulation, phone companies are required to file rates, but these rates are not regulated or monitored.

The security features required for prison phone calls (e.g. branding, tile limitations, monitoring, number restrictions, and bans on 3rd party calls) cam be applied to debit calls as well as collect calls - at no additional cost. (Because debit calls are prepaid and require no operator assistance, debit calls are charged at rates that are considerably cheaper than rates)

Debit calling would not require additional expensive hardware or software

Representatives of phone companies have told us tha tdebt calling would not substantially reduce the revenue received by the prison system. If calls were less expensive, individuals would simply call more often.

It is not true that taxpayers would have to subsidize the cost of the prison phone system if rates were reduced. Commissions currently paid to the prison systems more than cover any costs associated with the phones. If debit calling were implemented, rates could be reduced even more and still cover all costs.

It is true that the families and friends of prisoner and often poor, and can ill afford unreasonably high phone charges.

It is true that prisons are often built far from population centers, making visiting expensive and difficult. Phone contact is the most practical means of staying in touch.

To the extent that telephone commisions are used for the benefit of prisoners, all taxpayers benefit as well. It is not fair to "tax" only yhe families and friends of prisoners to pay for programs that will rehabilitate, produce more secure prisos, and enhance public safety.

I do hope someone will look into this problem, and so what you can to correct these abusive policies. in support of my position, I have included an article written by John E Dannenberg of Prison Legal News.

The Criminal Justice Section of the American Bar Association (ABA) made a formal recommendation in its "Report to the House of Delegates" (August 2005) ("Report") that the ABA go on record as urging all federal and state governments to afford Prisoners "reasonable opportunity to maintain communication with the free community, and to offer telephone services in the correctional setting with an appropriate range of options at the lowest possible rates."

Recognizing numerous srudies that have shown a direct correlation between prisoners' outside community support and their evetual reintegration success, the ABA took a pro-active stand to promote public interest in a responsible corrections telecommunications policy. The report added that telephone access can contribute to safer prisons by reducing tension via improved morale and better staff-prisoner interactions. Voice communication becomes literally a lifeline since at least 40% of the national prison population is known to be functionally illiterate.

Notwithstanding the accepted need to put controls on telephone abuse by prisoners, the Report noted that many detention entities install draconian limitations that instead frustrate the beneficial purpose of telephone contact. The limitation of collect-only calls severely limits contact with attorneys, a result found by many courts to be unconstitutional. Observing that 82 percent of state felony detainees are represented by public defenders, the ABA called the resulting levy of such exorbitant rates (up to 65% kickback)onto unsuspecting taxpayers "particularly pernicious."

The Report was critical of excessive rate practices because they indiscriminately punish innocent family and friends of prisoners. But even for those who can pay the fare, many are excluded by contractor practices wherein calls are blocked unless the person called subscribes to that telecommunications carrier, a resriction known to exclude up to 80% of prisoners' contacts.

Technology is hurting prisoners as well, the Report notes, because many free people now have only cell phones or use voice-over-internet-protocol, neither of which is set up to process collect billing.

Attorneys, who must maintain telephone contact with prisoners to protect their constitutional right to counsel, are also financially burdened. Worse yet, most, prisoners must make their collect calls on phones that are monitored and/or recorded, violating attorney-client privacy, a policy the ABA calls "presumptively unconstitutional."

The Report notes that easy money, unchecked by the courts or regulatory agencies, is the root of the evil. "Entering into such an arrangement [65% kickback] creates an ethical quagmire of both real and perceived conflicts which compromise both the professional integrity of correctional officials and the Public's Perception. Given the penological and societal benefits that occur when incarcerated people are able to maintain contact with the outside world, the monetary advantages are not worth the human costs."

Accordingly, the ABA is on record as recommending that correctional officials obtain the broadest possible range of calling options consistent with security, to include toll-free calling, debit calling and less oppressive restrictions. They emphasize the calls should be at the lowest possible rates - not the highest - obtained by soliciting competitive, non-exclusive contracts with multiple vendors. Finally, the Report implores that call-blocking never be imposed for failure to have the call recipient subscribe to a particular telecommunications carrier. Call-blocking should only occur for legitimate security concerns, customer requests or non-payment of bills. "Limits should be as flexible and generous as possible in light of the many benefits of maintaining ties between incarcerated people, their families, and their communities."

PLN readers and their families should quote this ABA Report in fighting repressive prison telephone policies.