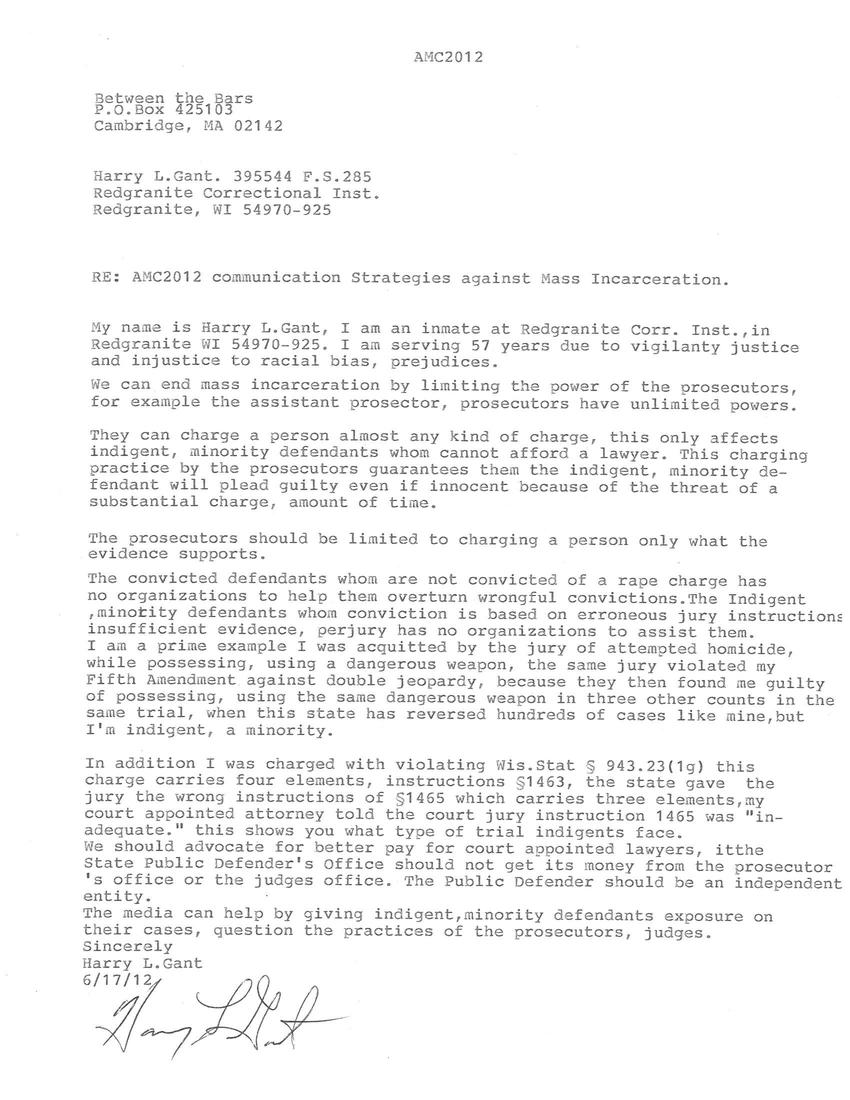 My name is Harry L. Gant, I am an inmate at Redgranite Corr. Inst., in Redgranite WI 54970-925. I am serving 57 years due to vigilante justice and injustice to racial bias, prejudices.

We can end mass incarceration by limiting the power of the prosecutors, for example the assistant prosecutor; prosecutors have unlimited powers.

The prosecutors should be limited to charging a person only what the evidence supports.

The convicted defendants whom are convicted of a rape charge have no organizations to help them overturn wrongful convictions. The indigent, minority defendants whom conviction is based on erroneous jury instructions, insufficient evidence, and perjury has no organizations to assist them. I am a prime example - I was acquitted by the jury of attempted homicide, while possessing and using a dangerous weapon. The same jury violated my Fifth Amendment right against double jeopardy, because they then found me guilty of possessing and using the same dangerous weapon in three other counts in the same trial, when this state has reversed hundreds of cases like mine, but I'm indigent, a minority.

In addition I was charged with violating Wis. State [?] 943.23(1g). This charge carries four elements, instructions [?]1463, the state gave the jury the wrong instructions of [?]1465 which carries three elements, my court appointed attorney told the court jury instruction 1465 was "inadequate." This shows you what type of trial indigents face. We should advocate for a better pay for court appointed lawyers, and the State Public Defender's Office should not get its money from the prosecutor's office or judge's office. The Public Defender should be an independent entity.

The media can help by giving indigent, minority defendants exposure on their cases, question the practices of the prosecutors, judges.

Thank you for the opportunity to read your thoughts and ideas concerning Mass Incarceration.

I definitely understand your statement on limiting the power of prosecutors and how they increase charges to harm indigent and minority defendants. Unfortunately, I know someone facing a similar situation and his court appointed attorney seems to be doing everything she can be help him be found guilty. Yes, Public Defenders should be a separate entity.

Will continue my response a little later, in a workshop learning to use this system.

Again, thank you for be so open and allowing me to become better informed.