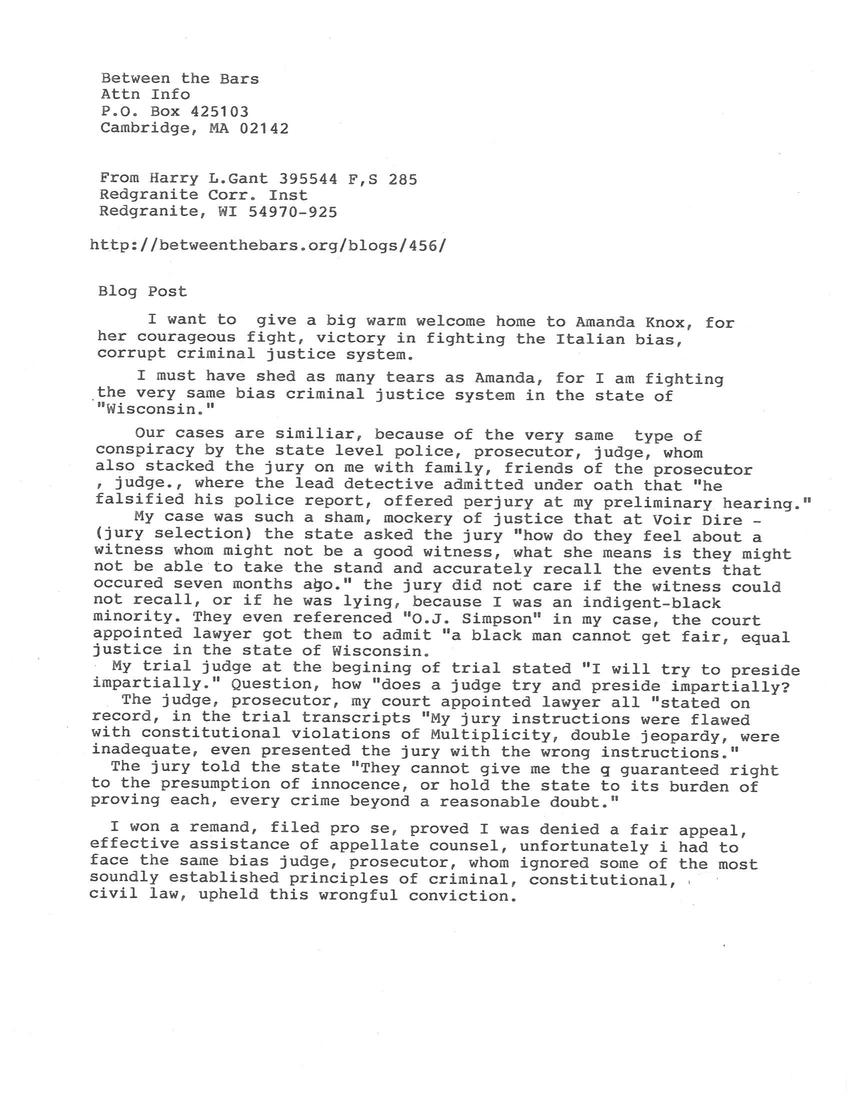 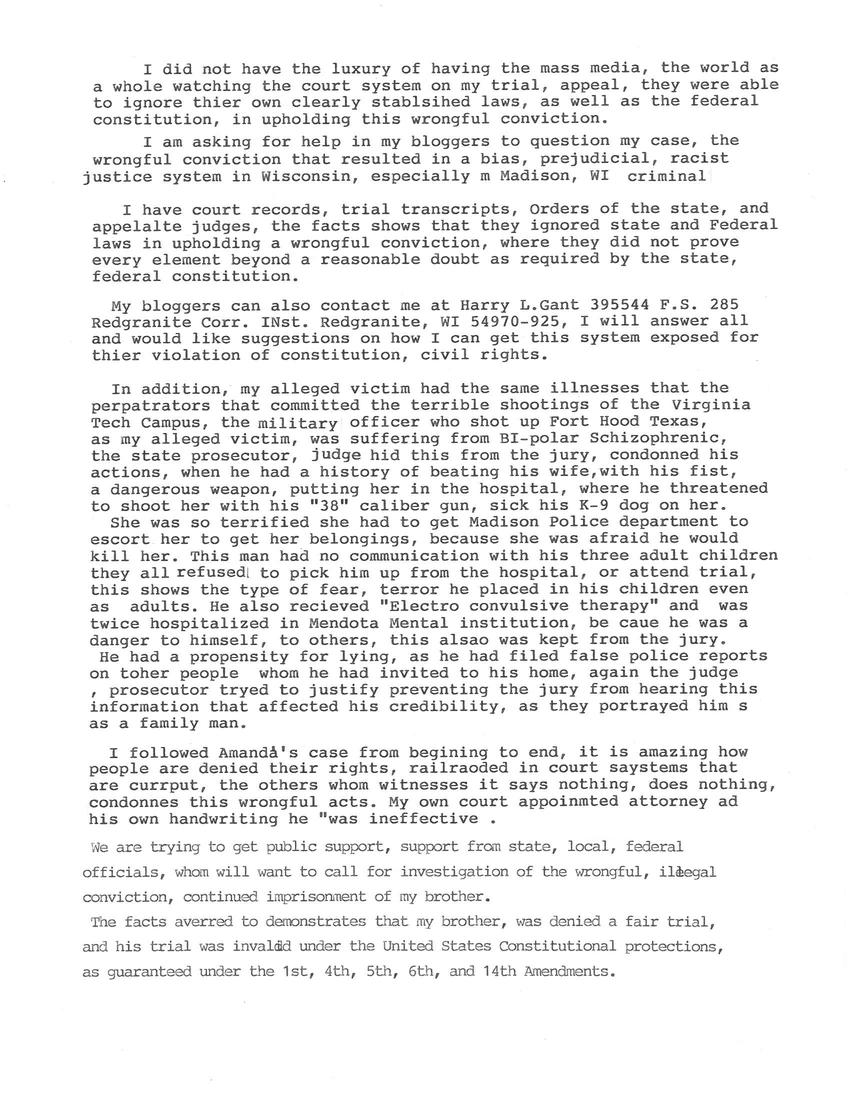 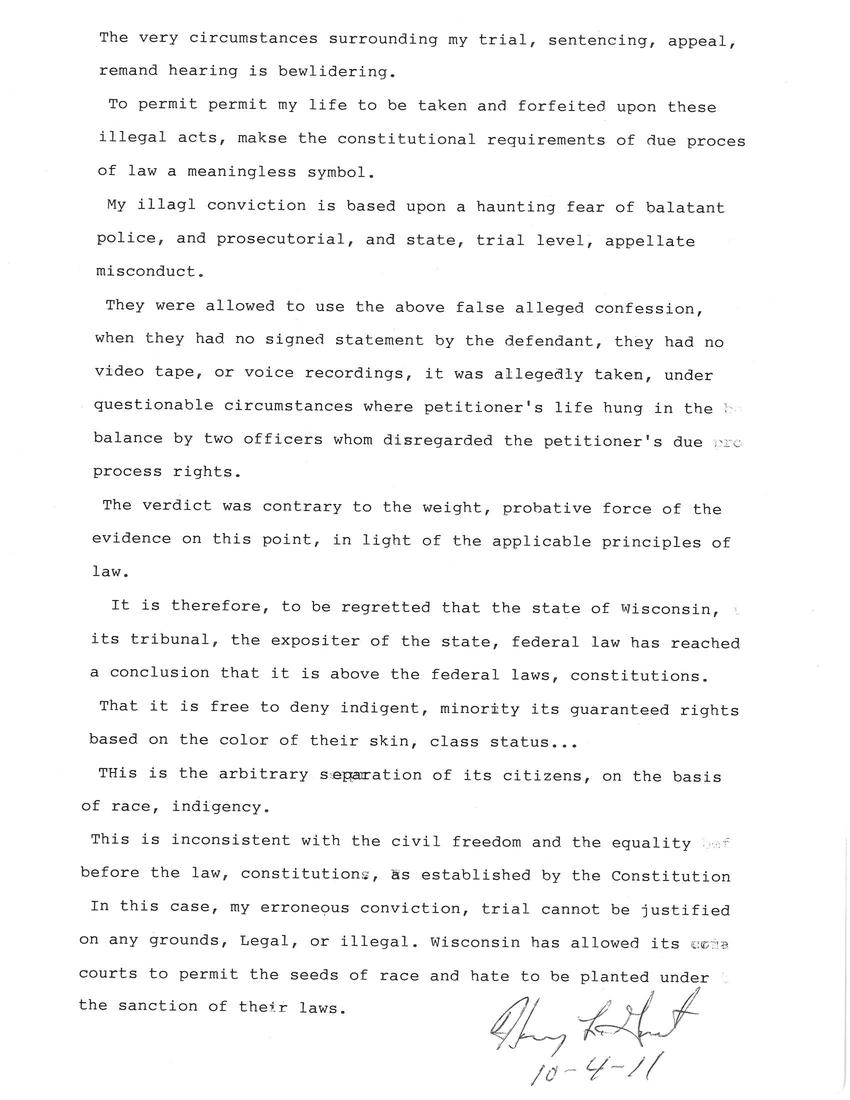 I want to give a big warm welcome home to Amanda Knox, for her courageous fight, victory in fighting the Italian bias, corrupt criminal justice system.

I must have shed as many tears as Amanda, for I am fighting the very same bias criminal justice system in the state of "Wisconsin."

Our cases are similar, because of the very same type of conspiracy by the state level police, prosecutor, judge, whom also stacked the jury on me with family, friends of the prosecutor, judge., where the lead detective admitted under oath that "he falsified his police report, offered perjury at my preliminary hearing."

My case was such a sham, mockery of justice that at Voir Dire - (jury selection) the state asked the jury "how do they feel about a witness whom might not be a good witness, what she means is they might not be able to take the stand and accurately recall the events that occurred seven months ago." the jury did not care if the witness could not recall, or if her was lying, because I was an indigent-black minority. They even referenced "O.J. Simpson" in my case, the court appointed lawyer got them to admit "a black man cannot get fair, equal justice in the state of Wisconsin.

The judge, prosecutor, my court appointed lawyer all "state on record, in the trial transcripts "My jury instructions were flawed with constitutional violations of Multiplicity, double jeopardy, were inadequate, even presented the jury with the wrong instructions."

The jury told the state "They cannot give me the guaranteed right to the presumption of innocence, or hold the state to its burden of proving each, every crime beyond a reasonable doubt."

I won a remand, filed pro se, proved I was denied a fair appeal, effective assistance of appellate counsel, unfortunately I had to face the same bias judge, prosecutor, whom ignored some of the most soundly established principles of criminal, constitutional, civil law, upheld this wrongful conviction.

I did not have the luxury of having the mass media, the world as a whole watching the court system on my trial, appeal, they were able to ignore their own clearly established laws, as well as the federal constitution, in upholding this wrongful conviction.

I am asking for help in my bloggers to question my case, the wrongful conviction that resulted in a bias, prejudicial, racist justice system in Wisconsin, especially Madison, WI criminal

I have court records, trial transcripts, Orders of the state, and appellate judges, the facts shows that they ignored state and Federal laws in upholding a wrongful conviction, where they did not prove every element beyond a reasonable doubt as required by the state, federal constitution.

My bloggers can also contact me at Harry L.Gant 395544 F.S. 285 Redgranite Corr. Inst. Redgranite, WI 54970-925, I will answer all and would like suggestions on how I can get this system exposed for their violation of constitution, civil rights.

In addition, my alleged victim had the same illnesses that the perpetrators who committed the terrible shootings of the Virginia Tech Campus, the military officer who shot up Fort Hood Texas, as my alleged victim, were suffering from bipolar schizophrenic. The state prosecutor and the judge hid this from the jury, condoned his actions, when he had a history of beating his wife with his fist, a dangerous weapon, and putting her in a hospital. He threatened to shoot her with his 38 caliber gun and sic his K-9 dog on her.

She was so terrified she had to get the Madison Police Department to escort her to her belongings. She was afraid he would kill her. This man had no communication with his three adult children. They all refused to pick him up from the hospital or attend his trial. This shows the type of fear and terror he placed in his children, even as adults. He also received electro convulsive therapy and was twice hospitalized in Mendota Mental Institution because he was a danger to himself and to others. This was also kept from the jury.

He had a propensity for lying as he had filed false police reports on other people whom he had invited to his home. Again, the judge and the prosecutor tried to justify preventing the jury from hearing this information that could have affected his credibility; they portrayed him as a family man.

I followed Amanda's case from beginning to end. It is amazing how people are denied their rights, railroaded in court systems that are corrupt. The others whom witnesses it say nothing, do nothing, condone his wrongful acts. My own court appointed attorney adds in his own handwriting that he "was ineffective."

We are trying to get public support, support from state, local, federal officials, whom will want to call our investigation of the wrongful and illegal conviction and continued imprisonment of my brother.

The facts averred to demonstrate that my brother was denied a fair trial, and his trial was invalid under the United States Constitutional protections, as guaranteed under the 1st, 4th, 5th, 6th, and 14th Amendments.

The very circumstances surrounding my trial, sentencing, appeal, and remand hearing are bewildering. To permit my life to be taken and forfeited upon these illegal acts makes the constitutional requirements of due process of law a meaningless symbol. My illegal conviction is based on a haunting fear of blatant police, and prosecutorial, and state, trial level and appellate misconduct.

They were allowed to use the above false alleged confession, when they had no signed agreement by the defendant, no video tape or voice recordings. It was allegedly taken under questionable circumstances where the petitioner's life hung in the balance by two officers whom disregarded the petitioner's due process rights. The verdict was contrary to the weight and probative force of the evidence on this point, in light of the applicable principles of the law.

It is therefore to be regretted that the state of Wisconsin, its tribunal, the expositor of the state, and federal law has reached a conclusion that is above the federal law and constitution. That it is to free to deny indigent minorities its guaranteed rights based on the color of their skin and class status. This is the arbitrary separation of its citizens on the basis of race and indigence. This is inconsistent with the civil freedom and the equality before the law and constitution as established by the Constitution.

In this case, my erroneous conviction and trial cannot be justified on any grounds, legal or illegal. Wisconsin has allowed its courts to permit the seeds of race and hate to be planted under the sanction of their laws.

Hi Harry Grant,
I can't help too much, but I'll try to provide you here with some resources:

Otherwise or additionally you should write the ACLU (American Civil Liberties Coalition) in WI:

Lawrence should be able to give you more resources, if nothing else.