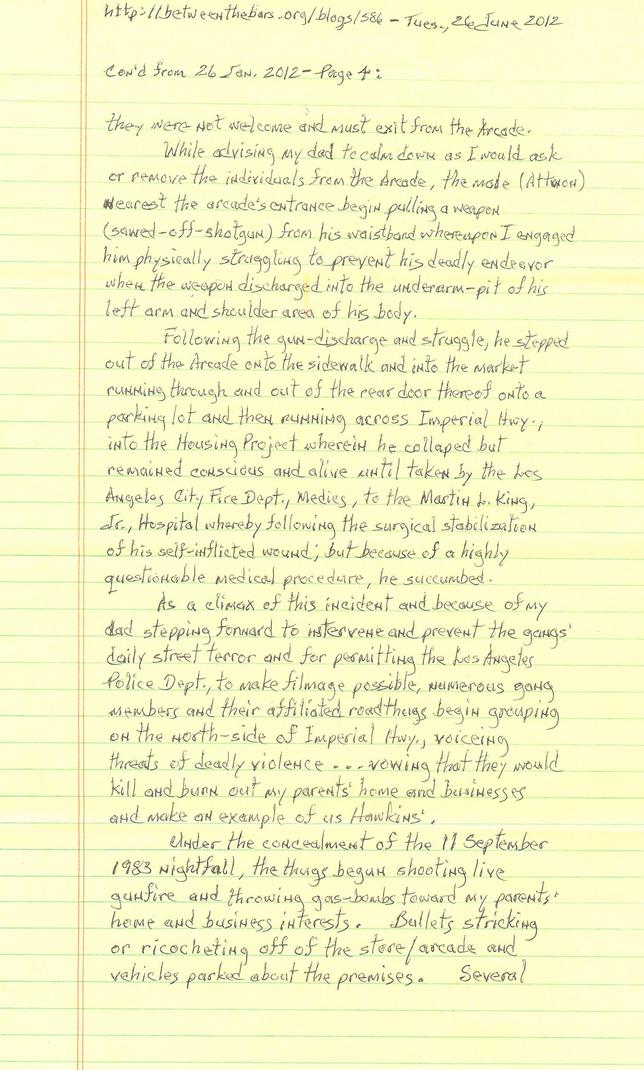 They were not welcome and must exit from the arcade.

While advising my Dad to calm down as I would ask or remove the individuals from the Arcade, the mode (attach) nearest the arcade's entrance begin pulling a weapon (sawed off - off - shotgun) from his waistband whereupon I engaged him physically struggling to prevent his deadly endeavor when the weapon discharged into the underarm - pit of his left arm and shoulder area of his body.

Following the gun-discharge and struggle, he stepped out of the arcade onto the sidewalk and into the market running through and out of the rear door thereof onto a parking lot and then running across Imperial Highway, into the Housing Project wherein he collapsed but remained conscious and alive until taken by the Los Angeles City fire Department, medics, to the Martin L King, Tr, hospital whereby following the surgical stabilization of his self-inflicted wound; but because of a highly questionable medical procedure, he succumbed.

As a climax of this incident and because of my Dad stepping forward to intervene and prevent the gsngs daily street terror and for permitting the Los Angeles Police Department to make filmage possible, numerous gang membrs and their affiliated roadthugs begin grouping on the north-side of Imperial Highway, voicing threats of deadly violence...vowing that they would kill and burn out my parent's home and business and make an example of us Hawkins.

Under the concealment of the 11 September 1983 nightfall, the thugs begun shooting live gunfire and throwing gas-bombs toward my parents home and business interests. Bullets stricking or ricocheting off of the dtore/arcade and vehicles parked about the premises. Several