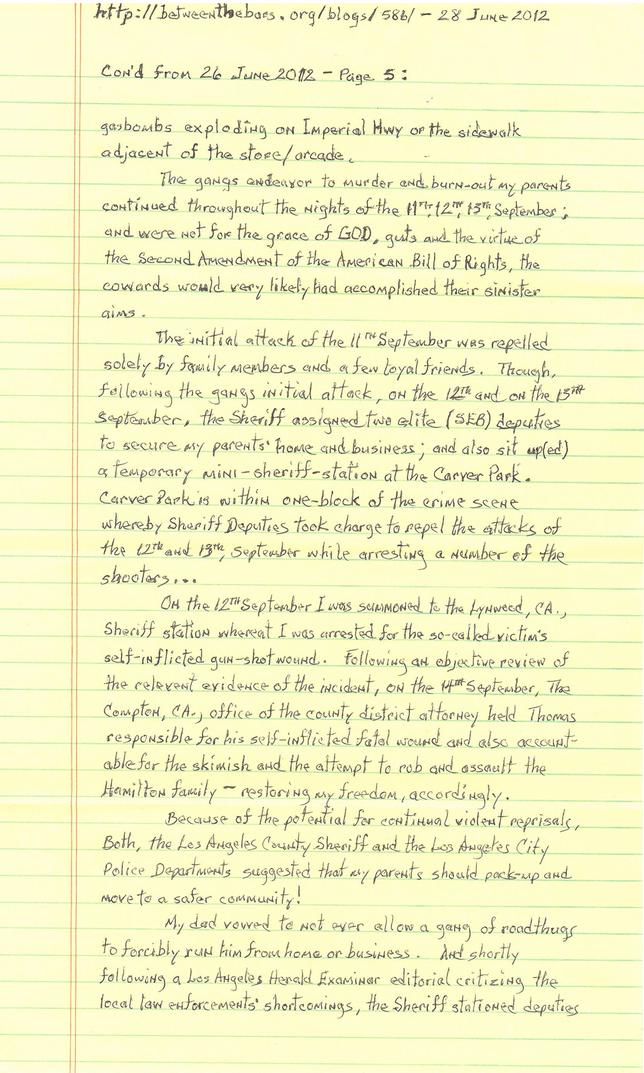 gas bomps exploding on Imperial Highway of the sidewalk adjacent of the store/arcade.

The gangs endeavor to murder ad burn-out my parents continued throughout the nights of the 11th, 12th, 13th September; and were not for the grace of GOD, guts and the virtue of the Second Amendment of the American Bill of Rights, the cowards would very likely had accomplished their sinister aims.

the initial attack of the 11th September was repelled solely by family members and a few loyal friends. Though, following the gangs initial attack, on the 12th and on the 13th September, the Sheriff assigned two elite (SEB) deputies to secure my parents home and business; and also sit up (ed) a temporary mini-sheriff-station at the Carver Park. Carver Park is within one-block of the crine scene whereby Sheriff Deputies took charge to repel the attacks of the 12th and 13th, September while arresting a number of the shooter...

On the 12th September I was summoned to the Lynwood, CA, Sheriff station whereat I was arrested for the so-called victims self-inflicted gun-shot wound. Following and objective review of the relevant evidence of the incident, on the 14th September, The Compton CA, office of the county district attorney held Thomas responsible for his self-inflicted fatal would and also accountable for the skimish and the attempt to rob and assault the Hamilton family - restoring my freedom, accordingly.

Because of the potential for continual violent reprisals, both, the Los Angeles County Sheriff and the Los Angeles City Police Departments suggested that my parents should pack-up and move to a safer community!

My Dad vowed to not ever allow a gang of roadthugs to forcibly run him from home or business. And shortly following a Los Angeles, Herald examiner editorial criticizing the local law enforcements shortcomings, the Sheriff stationed deputies