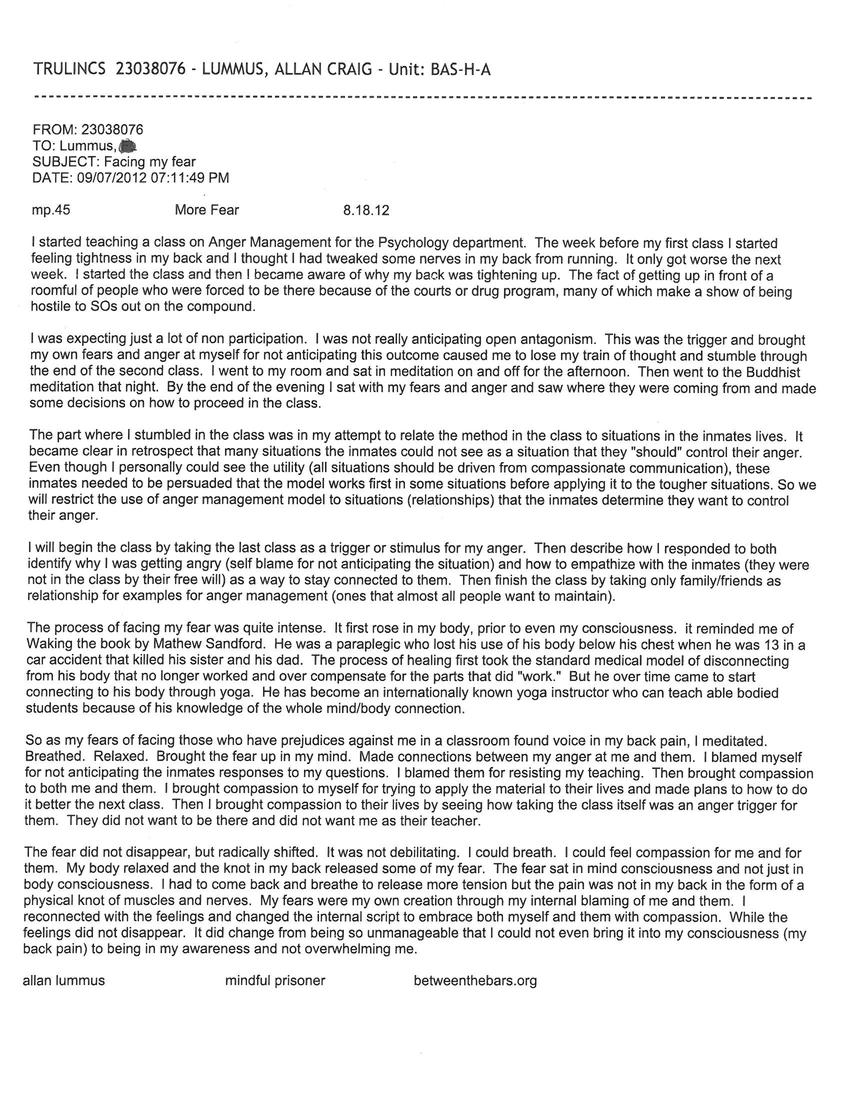 I started teaching a class on Anger Management for the Psychology Department. The week before my first class I started feeling tightness in my back and I thought I had tweaked some nerves in my back from running. It only got worse the next week. I started the class and then I became aware of why my back was tightening up. The fact of getting up in front of a roomful of people who were forced to be there because of the courts or drug program, many of which make a show of being hostile to SOs out on the compound.

I was expecting just a lot of non participation. I was not really anticipating open antagonism. This was the trigger and brought my own fears and anger at myself for not anticipating this outcome caused me to lose my train of thought and stumble through the end of the second class. I went to my room and sat in meditation on and off for the afternoon. Then went to the Buddhist meditation that night. By the end of the evening I sat with my fears and anger and saw where they were coming from and made some decisions on how to proceed in the class.

I will begin the class by taking the last class as a trigger or stimulus for my anger. Then describe how I responded to both identify why I was getting angry (self blame for not anticipating the situation) and how to empathize with the inmates (they were not in the class by their free will) as a way to stay connected to them. Then finish the class by taking only family/friends as relationship for examples for anger management (ones that almost all people want to maintain).

The process of facing my fear was quite intense. It first rose in my body, prior to even my consciousness. It reminded me of Waking, the book by Matthew Sandford. He was a paraplegic who lost his use of his body below his chest when he was 13 in a car accident that killed his sister and his dad. The process of healing first took the standard medical model of disconnecting from his body that no longer worked and over compensate for the parts that did "work". But he over time came to start connecting to his body through yoga. He has become an internationally known yoga instructor who can teach able bodied students because of his knowledge of the whole mind/body connection.

So my fears of facing those who have prejudices against me in a classroom found voice in my back pain. I meditated. Breathed. Relaxed. Brought the fear up in my mind. Made connections between my anger at me and them. I blamed myself for not anticipating the inmates' responses to my questions. I blamed them for resisting my teaching. Then brought compassion to both me and them. I brought compassion to myself for trying to apply the material to their lives and made plans to how to do it better the next class. Then I brought compassion to their lives by seeing how taking the class itself was an anger trigger for them. They did not want to be there and did not want me as their teacher.

The fear did not disappear, but radically shifted. It was not debilitating. I could breathe. I could feel compassion for me and for them. My body relaxed and the knot in my back released some of my fear. The fear sat in mind consciousness and not just in body consciousness. I had to come back and breathe to release more tension but the pain was not in my back in the form of a physical knot of muscles and nerves. My fears were my own creation through my internal blaming of me and them. I reconnected with the feelings and changed the internal script to embrace both myself and them with compassion. While the feelings did not disappear. It did change from being so unmanageable that I could not even bring it into my consciousness (my back pain) to being in my awareness and not overwhelming me.