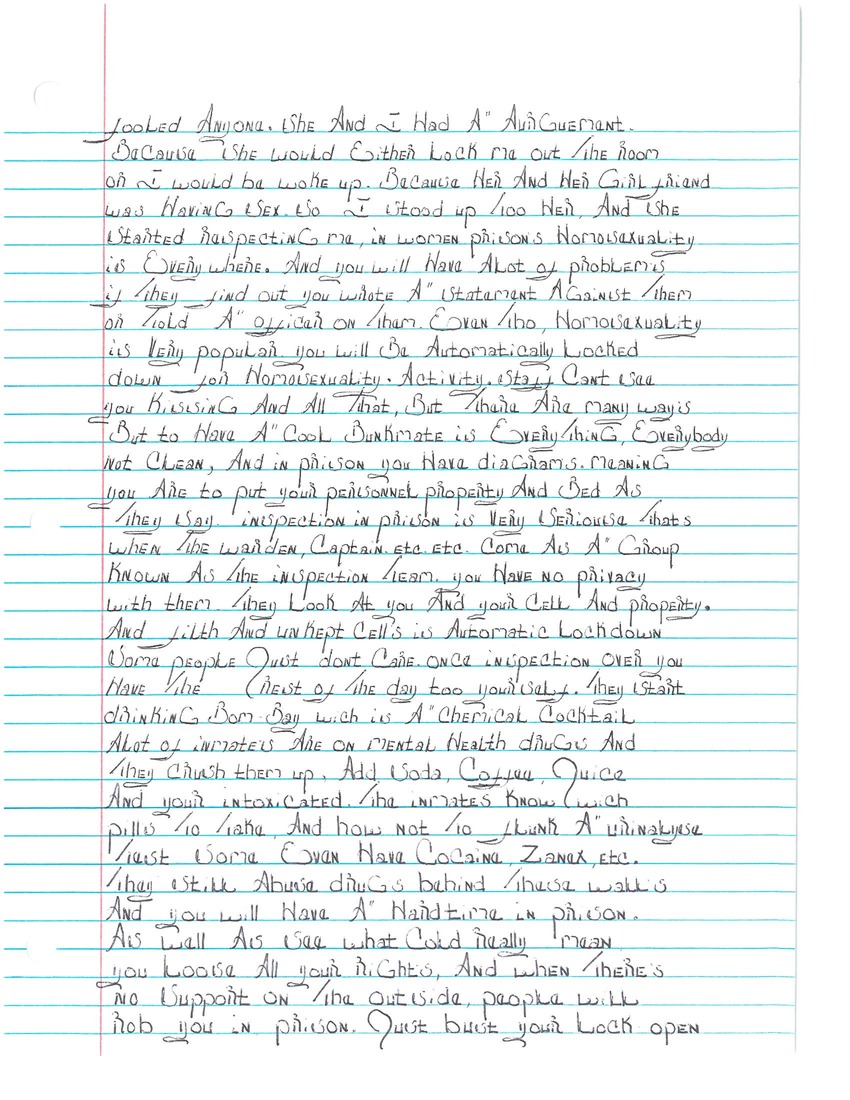 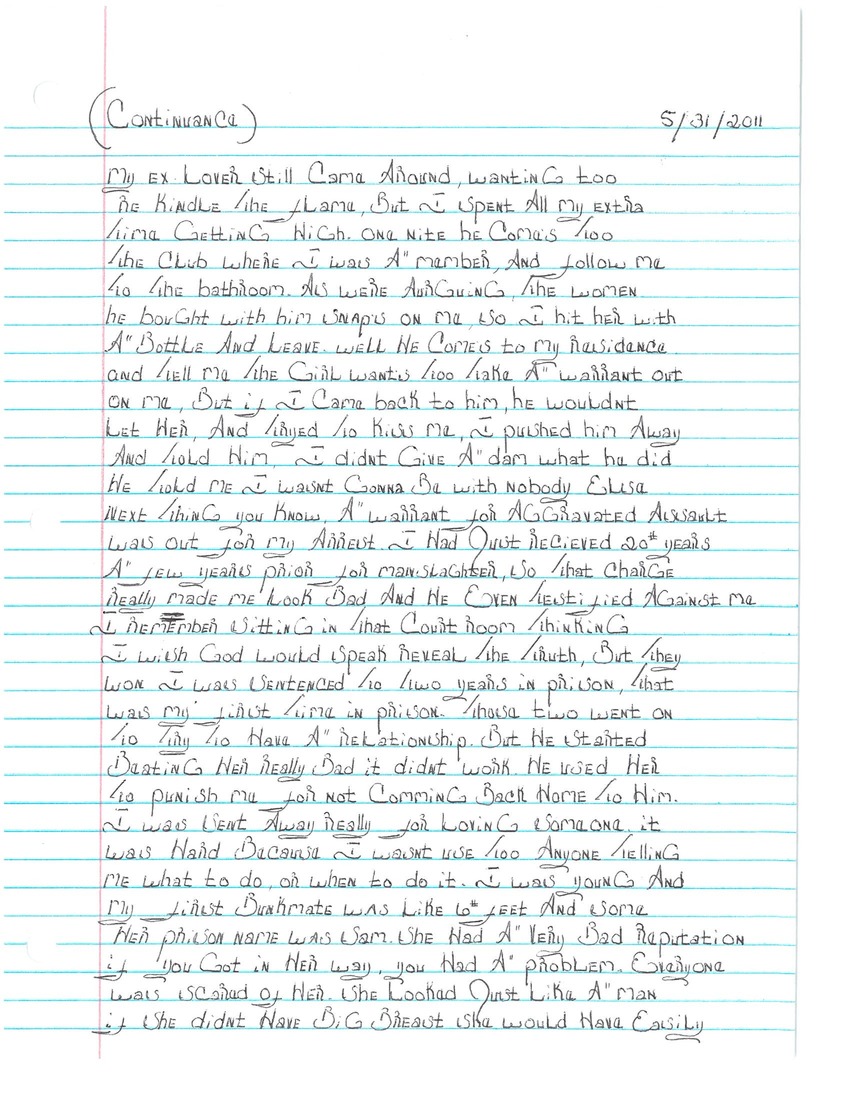 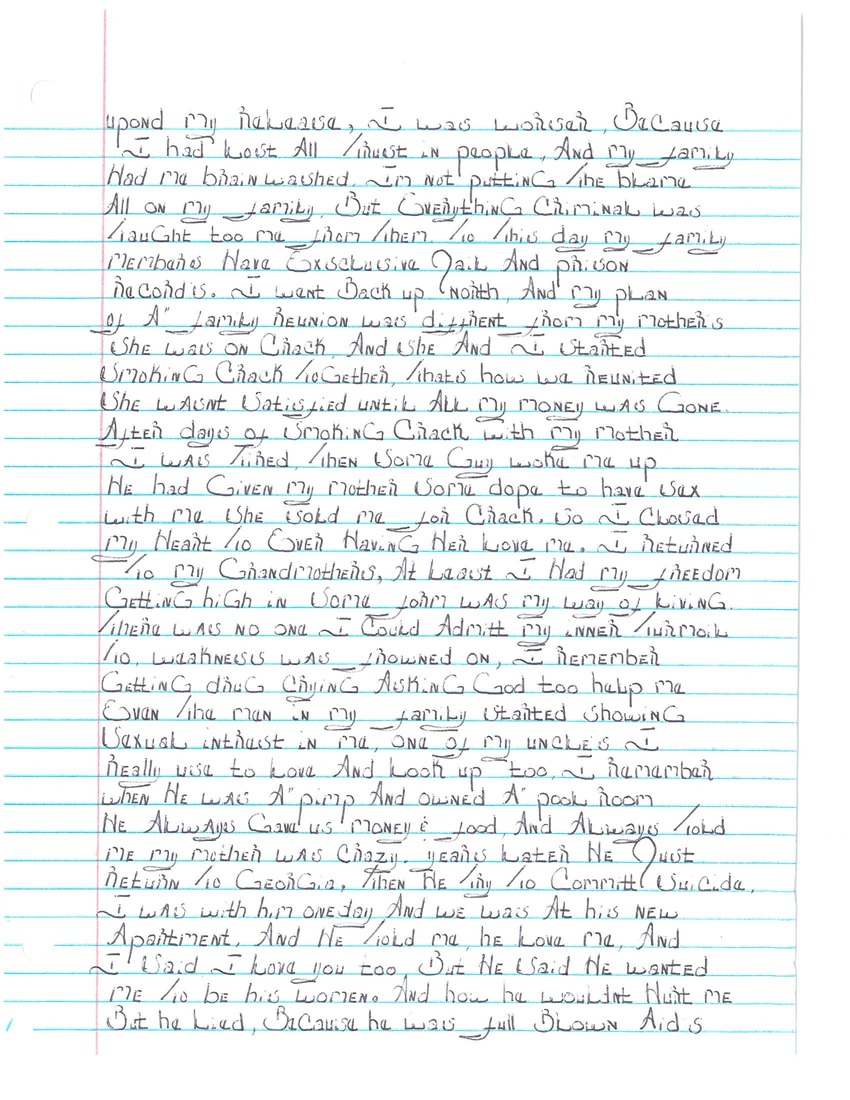 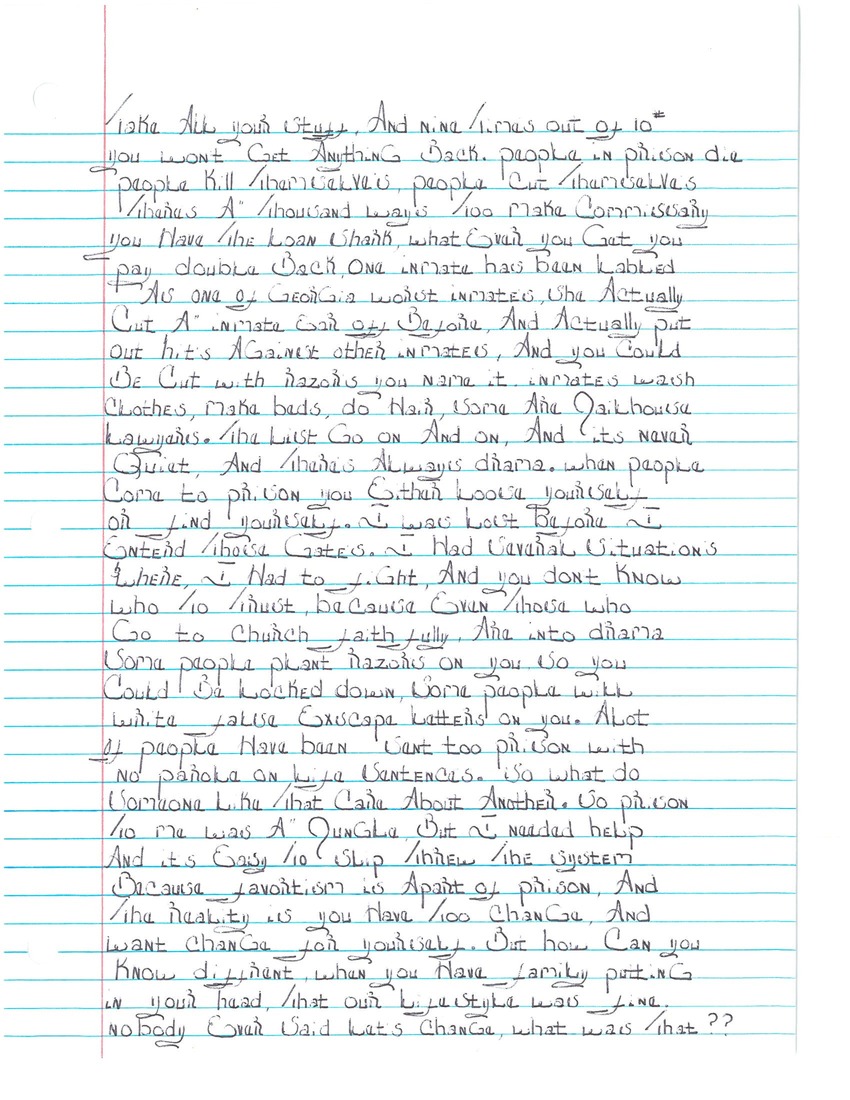 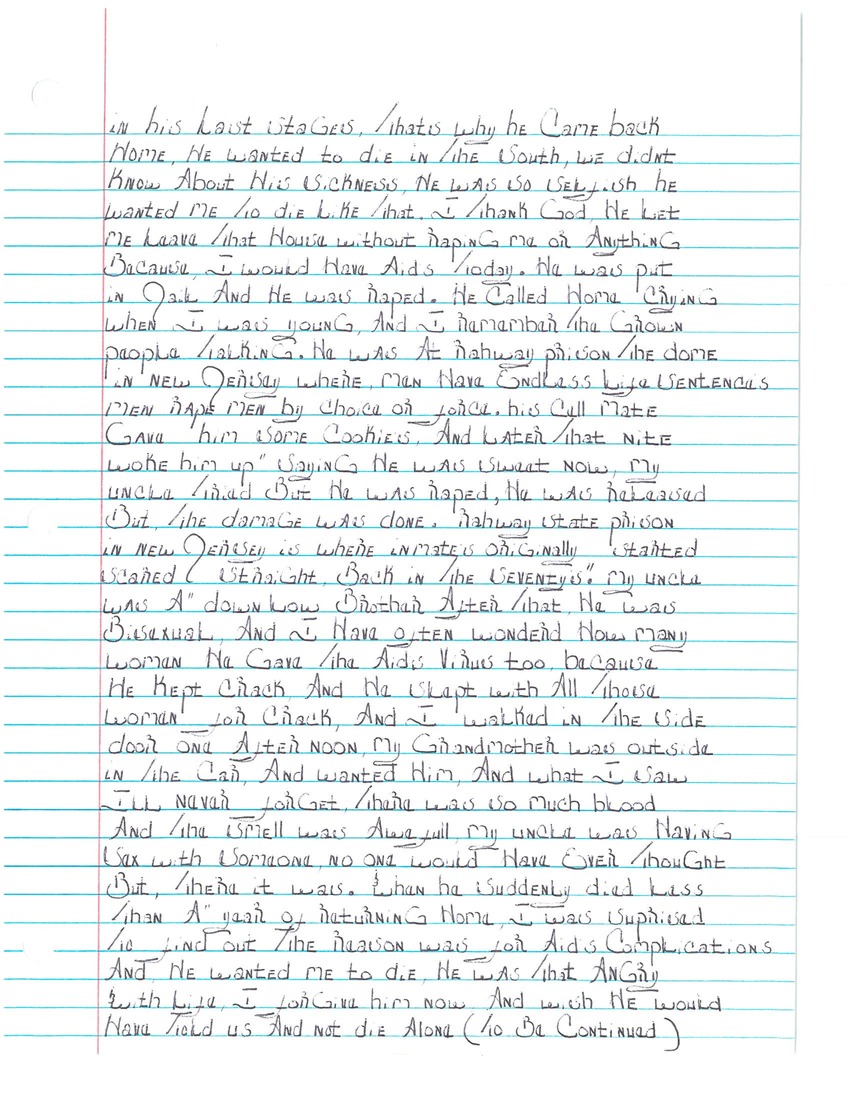 My ex lover still came around, wanting to rekindle the flame, but I spent all my extra time getting high. One night he comes to the club where I was a member, and follow me to the bathroom. As we're arguing, the woman he brought with him snaps on me, so I hit her with a bottle and leave. Well, he comes to my residence and tell me the girl wants to take a warrant out on me. But if I came back to him, he wouldn't let her, and tried to kiss me, I pushed him away and told him I didn't give a damn what he did. He told me I wasn't gonna be with nobody else. Next thing you know, a warrant for aggravated assault was out for my arrest. I had just received 20 years a few years prior for manslaughter, so that charge really made me look bad and he even testified against me. I remember sitting in that courtroom thinking I wish God would speak, reveal the truth, but they won. I was sentenced to two years in prison, that was my first time in prison. Those two went on to try to have a relationship. But he started beating her really bad, it didn't work. He used her to punish me for not coming back home to him. I was sent away really for loving someone. It was hard because I wasn't used to anyone telling me what to do, or when to do it. I was young and my first bunkmate was like 6 feet and some. Her prison name was Sam. She had a very bad reputation. If you got in her way, you had a problem. Everyone was scared of her. She looked just like a man. If she didn't have big breasts she would have easily fooled anyone. She and I had an argument because she would either lock me out the room or I would be woke up. Because her and her girlfriend was having sex. So I stood up to her, and she started suspecting me, in women prisons homosexuality is everywhere. And you will have a lot of problems if they find out you wrote a statement against them or told an officer on them. Even tho, homosexuality is very popular. You will be automatically locked down for homosexuality activity. Staff can't see you kissing and all that, but there are many ways but to have a cool bunkmate is everything, everybody not clean, and in prison you have diagrams. Meaning you are to put your personal property and bed as they say. Inspection in prison is very serious, that's when the warden, captain etc. etc. come as a group known as the inspection team. You have no privacy with them. They look at you and your cell and property. And filth and unkept cells is automatic lockdown. Some people just don't care. Once inspection over you have the rest of the day to yourself. They start drinking Bom-Bay, which is a chemical cocktail. A lot of inmates are on mental health drugs and they crush them up, add soda, coffee, juice and you're intoxicated. The inmates know which pills to take and how not to flunk a urinalysis test. Some even have cocaine, Xanax, etc. They still abuse drugs behind these walls and you will have a hard time in prison. As well as see what cold really mean. You lose all your rights, and when there's no support on the outside, people will rob you in prison. Just bust your lock open, take all your stuff, and nine times out of 10 you won't get anything back. People in prison die. People kill themselves, people cut themselves. There's a thousand ways to make commissary. You have the loan shark, whatever you get you pay double back. One inmate has been labelled as one of Georgia worst inmates. She actually cut an inmate ear off before, and actually put out hits against other inmates. And you could be cut with razors, you name it. Inmates wash clothes, make beds, do hair, some are jailhouse lawyers. The list go on and on, and it's never quiet, and there's always drama. When people come to prison you either lose yourself or find yourself. I was lost before I entered these gates. I had several situations where I had to fight, and you don't know who to trust, because even those who go to church faithfully, are into drama. Some people plant razors on you so you could be locked down. Some people will write false escape letters on you. A lot of people have been sent to prison with no parole on life sentences. So what do someone like that care about another. So prison to me was a jungle. But I needed help and it's easy to slip through the system because favoritism is a part of prison, and the reality is you have to change, and want change for yourself. But how can you know different, when you have family putting in your head, that our lifestyle was fine. Nobody ever said let's change, what was that??

Upon my release, I was worser, because I had lost all trust in people, and my family had me brainwashed. I'm not putting the blame all on my family, but everything criminal was taught to me from them. To this day my family members have exclusive jail and prison records. I went back up north, and my plan of a family reunion was different from my mother's. She was on crack, and she and I started smoking crack together, that's how we reunited. She wasn't satisfied until all my money was gone. After days of smoking crack with my mother I was tired, then some guy woke me up. He had given my mother some dope to have sex with me. She sold me for crack. So I closed my heart to ever having her love me. I returned to my grandmother's, at least I had my freedom. Getting high in some form was my way of living. There was no one I could admit my inner turmoil to, weakness was frowned on, I remember getting drug, crying, asking God to help me. Even the men in my family started showing sexual interest in me, one of my uncles I really used to love and look up to, I remember when he was a pimp and owned a pool room he always gave us money & food, and always told me my mother was crazy. Years later he just return to Georgia, then he try to commit suicide. I was with him one day and we was at his new apartment, and he told me he love me, and I said I love you too. But he said he wanted me to be his woman. And how he wouldn't hurt me. But he lied, because he was full blown AIDS in his last stages. That's why he came back home, he wanted to die in the South, we didn't know about his sickness. He was so selfish he wanted me to die like that. I thank God, he let me leave that house without raping me or anything because I would have AIDS today. He was put in jail and he was raped. He called home crying when I was young, and I remember the grown people talking. He was at Rahway Prison, the dome in New Jersey where men have endless life sentences. Men rape men by choice or force. His cell mate gave him some cookies, and later that night woke him up saying he was sweet now. My uncle tried but he was raped, he was released but the damage was done. Rahway State Prison in New Jersey is where inmates originally started Scared Straight, back in the seventies. My uncle was a down low brother after that. He was bisexual, and I have often wondered how many women he gave the AIDS virus to, because he kept crack and he slept with all those women for crack, and I walked in the side door one afternoon, my grandmother was outside in the car, and wanted him, and what I saw I'll never forget. There was so much blood and the smell was awful. My uncle was having sex with someone, no one would have ever thought but, there it was. When he suddenly died less than a year of returning home, I was surprised to find out the reason was for AIDS complications and he wanted me to die. He was that angry with life. I forgive him now and wish he would have told us and not die alone. (To Be Continued)