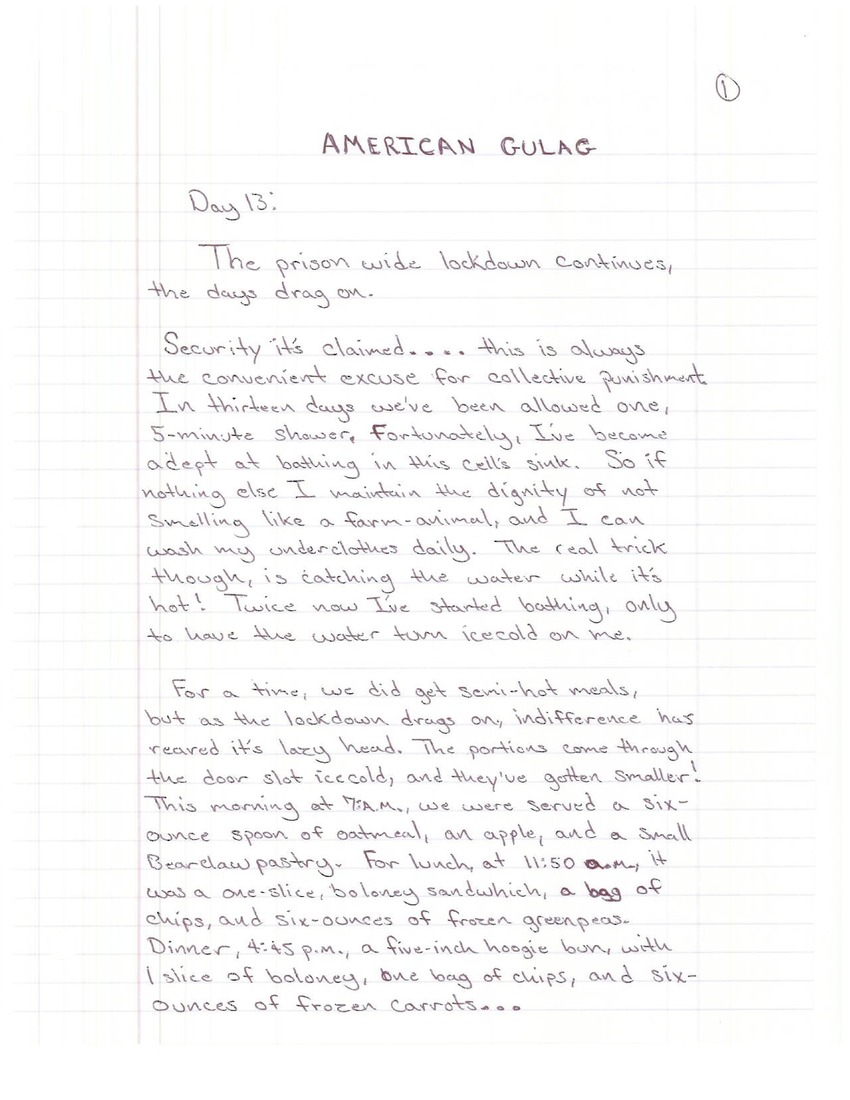 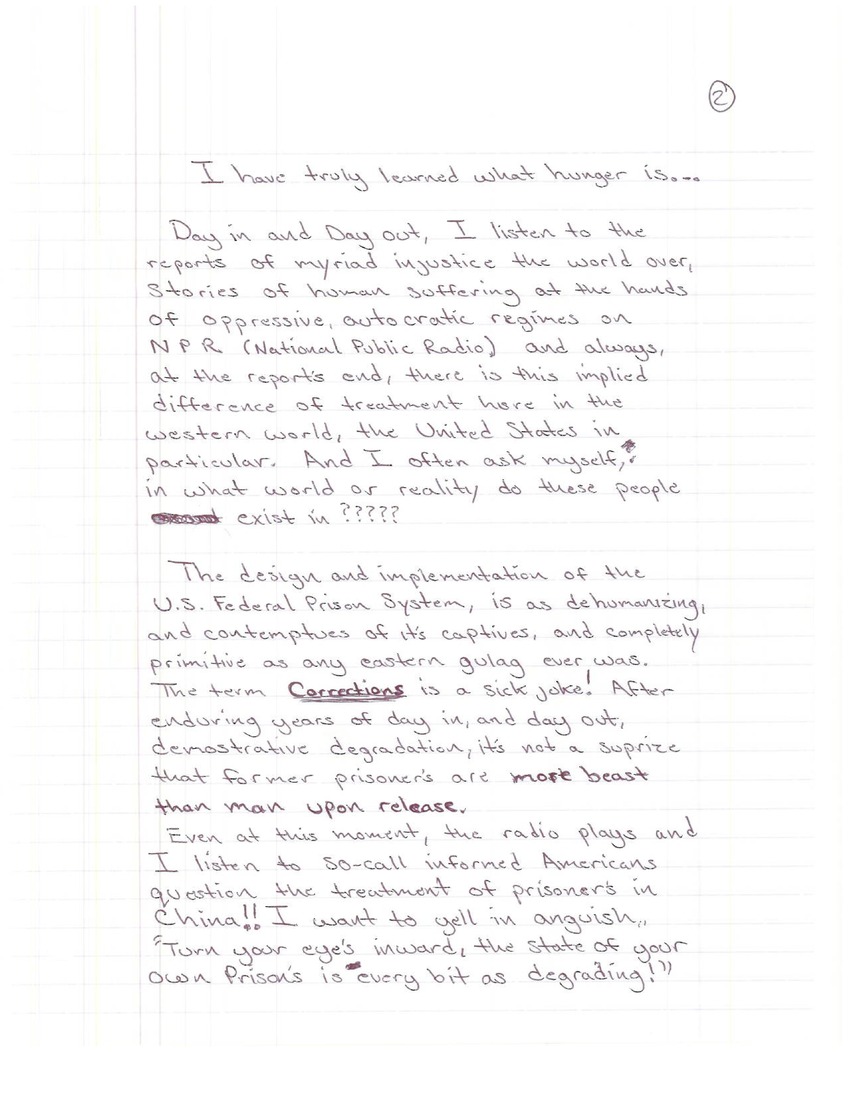 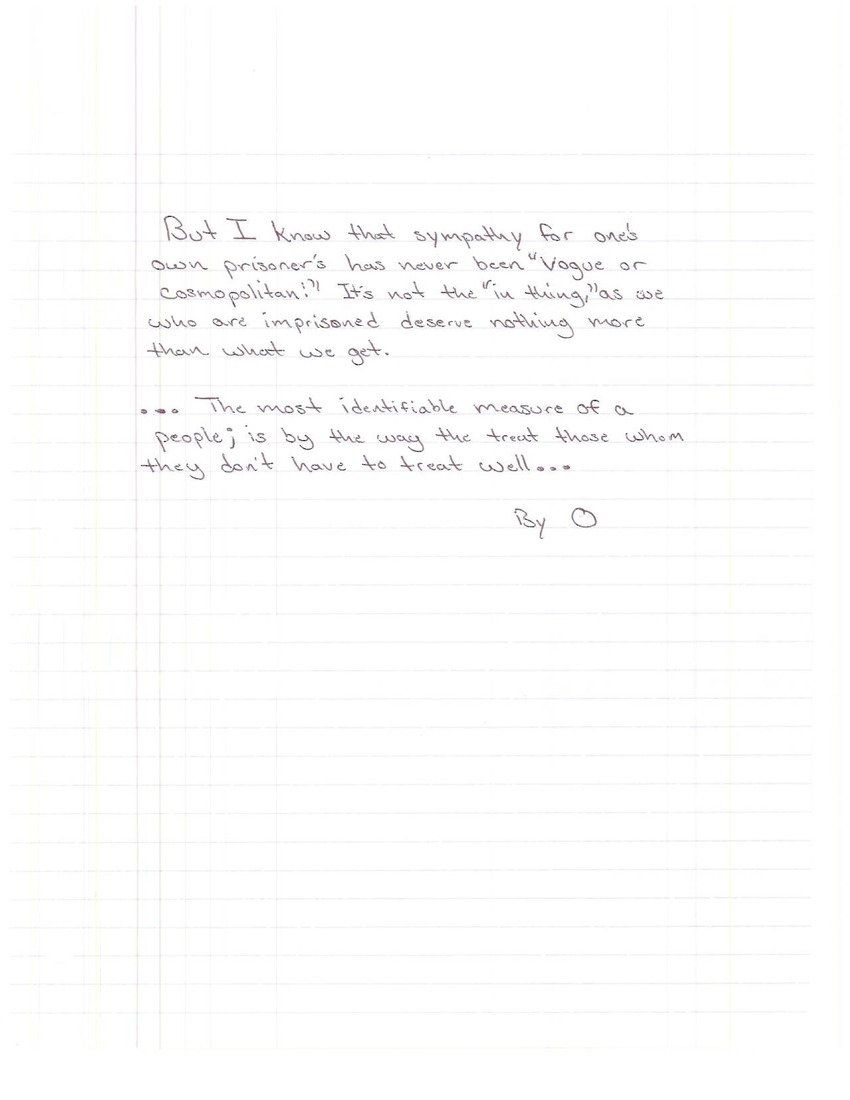 The prison wide lockdown continues, the days drag on. Security it's claimed. This is always the convenient excuse for collective punishment.

In thirteen days, we've been allowed one five-minute shower. Fortunately, I've become adept at bathing in this cell's sink. So if nothing else, I maintain the dignity of not smelling like a farm animal, and I can wash my underclothes daily. The real trick though is catching the water while it's hot! Twice now I've started bathing, only to have the water turn ice cold on me.

For a time, we did get semi-hot meals, but as the lockdown drags on, indifference has reared its ugly head. The portions come through the door slot ice cold, and they've gotten smaller! This morning at 7 A.M., we were served a six-ounce spoon of oatmeal, an apple, and a small bearclaw pastry. For lunch at 11:50 A.M., it was a one-slice boloney sandwich, a bag of chips, and six ounces of frozen green peas. Dinner, 4:45 P.M., a five-inch hoogie bun with one slice of boloney, one bag of chips, and six ounces of frozen carrots.

I have truly learned what hunger is.

Day in and day out, I listen to the reports of myriad injustice the world over. Stories of human suffering at the hands of oppressive, autocratic regimes on NPR (National Public Radio) and always at the report's end, there is this implied difference of treatment here in the Western world, the United States in particular. And I often ask myself, in what world or reality do these people exist?

The design and implementation of the U.S. Federal Prison System is as dehumanizing and contemptuous of its captives and completely primitive as any eastern gulag ever was. The term "corrections" is a sick joke! After enduring years of day in and day out, demonstrative degradation, it's not a surprise that former prisoners are more beast than man upon release.

Even at this moment, the radio plays and I listen to so-called informed Americans question the treatment of prisoners in China! I want to yell in anguish, "Turn your eyes inward! The state of your own prisons is every bit as degrading!"

But I know that sympathy for one's own prisoners has never been "vogue" or "cosmopolitan"! It's not the "in thing", as we who are imprisoned deserve nothing more than what we get.

The most identifiable measure of a people; is by the way the treat those whom they don't have to treat well.

What happens in China is important. But yes, in Amerika we do like to point to autocracies elsewhere, somehow it makes us happy - as if injustice in other places absolves us of injustice in our own homes and cities.

But I think it's even worse than you realise. I live in a third world country and NOTHING compares to the horrors of the USA. Monstrous conceptions such Administrative Segregation are the sole prerogative of the USA in the entire civilised world. As more and more countries put an end to the death penalty more and more states are re-introducing it in the USA. Children are tried as adults. Children are sentenced to death. Sentences are so long that they would be laughable if they weren't so tragic. The COs in prisons are cowards and are armed to the teeth with unimaginable powers over those who they are supposed to care for. Your cops have draconian powers. Even during apartheid years in South Africa nothing like this ocurred in my country. We were considered the cesspool of the world, but America stands proud.
And justice for all - I think not.