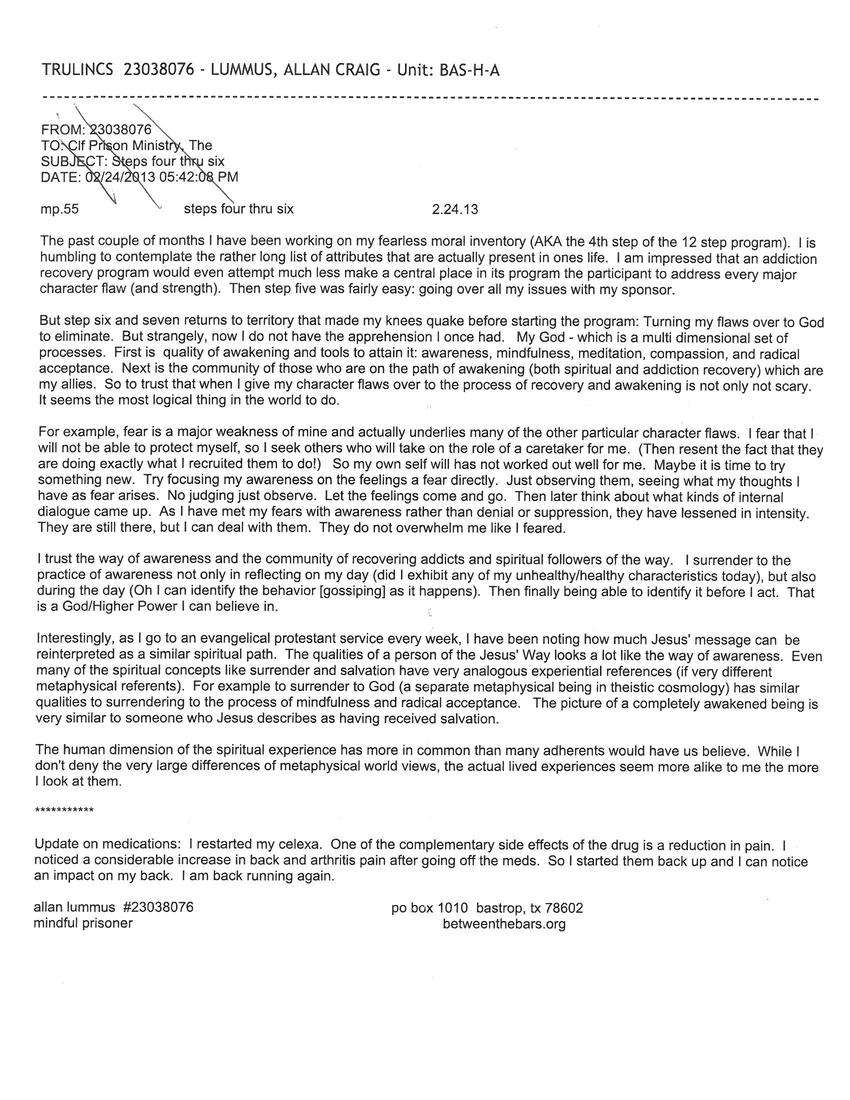 The past couple of months I have been working on my fearless moral inventory (AKA the 4th step of the 12-step program). It is humbling to contemplate the rather long list of attributes that are actually present in one's life. I am impressed that an addiction recovery program would even attempt much less make a central place in its program ask the participant to address every major character flaw (and strength). Then step five was fairly easy; going over all my issues with my sponsor.

But step six and seven returns to territory that made my knees quake before starting the program: Turning my flaws over to God to eliminate. But strangely, now I do not have the apprehension I once had. My God - which is a multi-dimensional set of processes. First is quality of awakening and tools to attain it; awareness, mindfulness, meditation, compassion, and radical acceptance. So to trust that when I give my character flaws over to the process of recovery and awakening is not only not scary, it seems the most logical thing in the world to do.

For example, fear is a major weakness of mine and actually underlies many of the other particular character flaws. I fear that I will not be able to protect myself, so I seek others who will take on the role of caretaker for me. (Then resent the fact that they are doing exactly what I recruited them to do!) So my own self will has not worked out well for me. Maybe it is time to try something new. Try focusing my awareness on the feelings of fear directly. Just observing them, seeing what my thoughts are as my fear arises. No judging, just observation. Let the feelings come and go. Then later think about what kinds of internal dialogue came up. As I have met my fears with awareness rather than denial or suppression, they have lessened in intensity. They are still there, but I can deal with them. They do not overwhelm me like I feared.

I trust the way of awareness and the community of recovering addicts and spiritual followers of the way. I surrender to the practise of awareness not only in reflecting on my day (did I exhibit any of my unhealthy/healthy characteristics today), but also during the day (oh I can identify the behaviour [gossiping] as it happens). Then finally being able to identify it before I act. That is a God/Higher Power I can believe in.

Interestingly, as I go to an Evangelical Protestant service every week, I have been noting how much Jesus' message can be reinterpreted as a similar spiritual path. The qualities of a person of Jesus' way looks a lot like the way of awareness. Even many of the spiritual concepts like surrender and salvation have very analogous experiential references (if very different metaphysical referents). For example to surrender to God (a separate metaphysical being in theistic cosmology) has similar qualities to surrendering to the process of mindfulness and radical acceptance. The picture of a completely awakened being is very similar to someone who Jesus describes as having received salvation.

The human dimension of the spiritual experience has more in common than many adherents would have us believe. While I don't deny the very large differences of metaphysical world views, the actual lived experiences seem more alike to me the more I look at them.

Update on medications: I restarted my Celexa. One of the complementary side-effects of the drug is a reduction in pain. I noticed a considerable increase in back and arthritis pain after going off the meds. So I started them back up and I can notice an impact on my back. I am back running again.