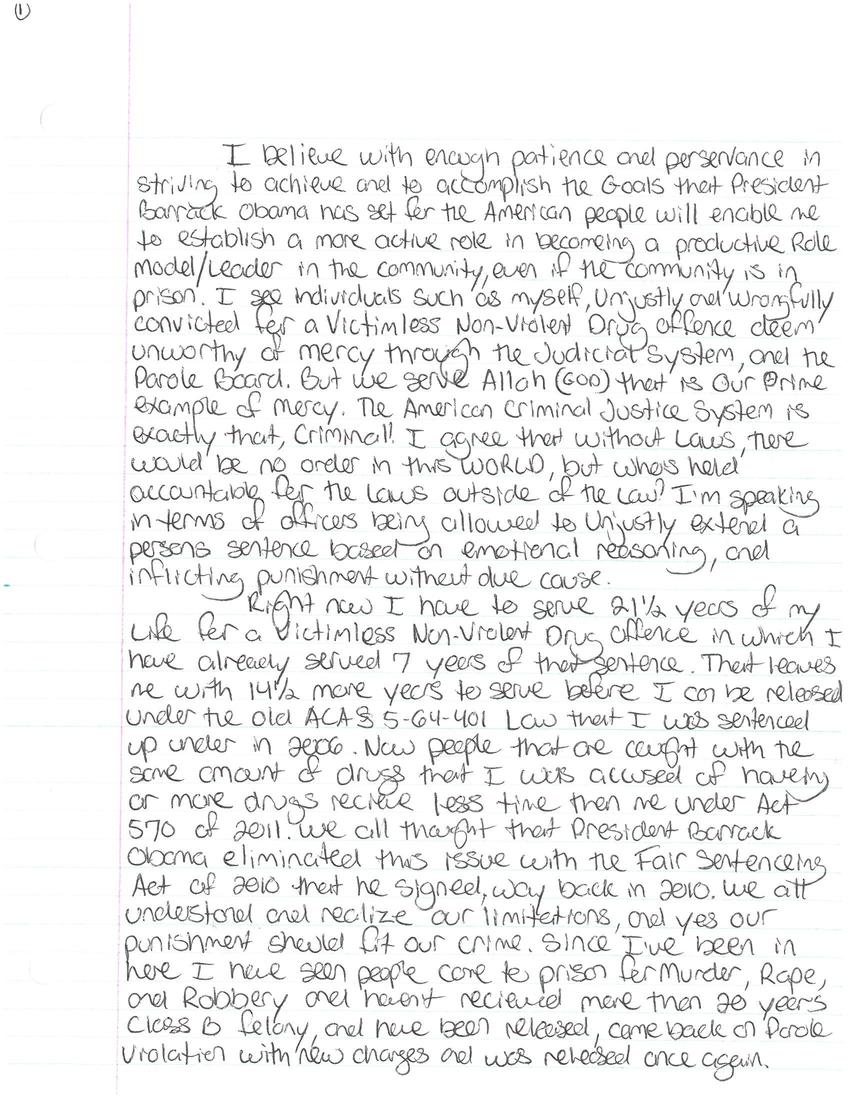 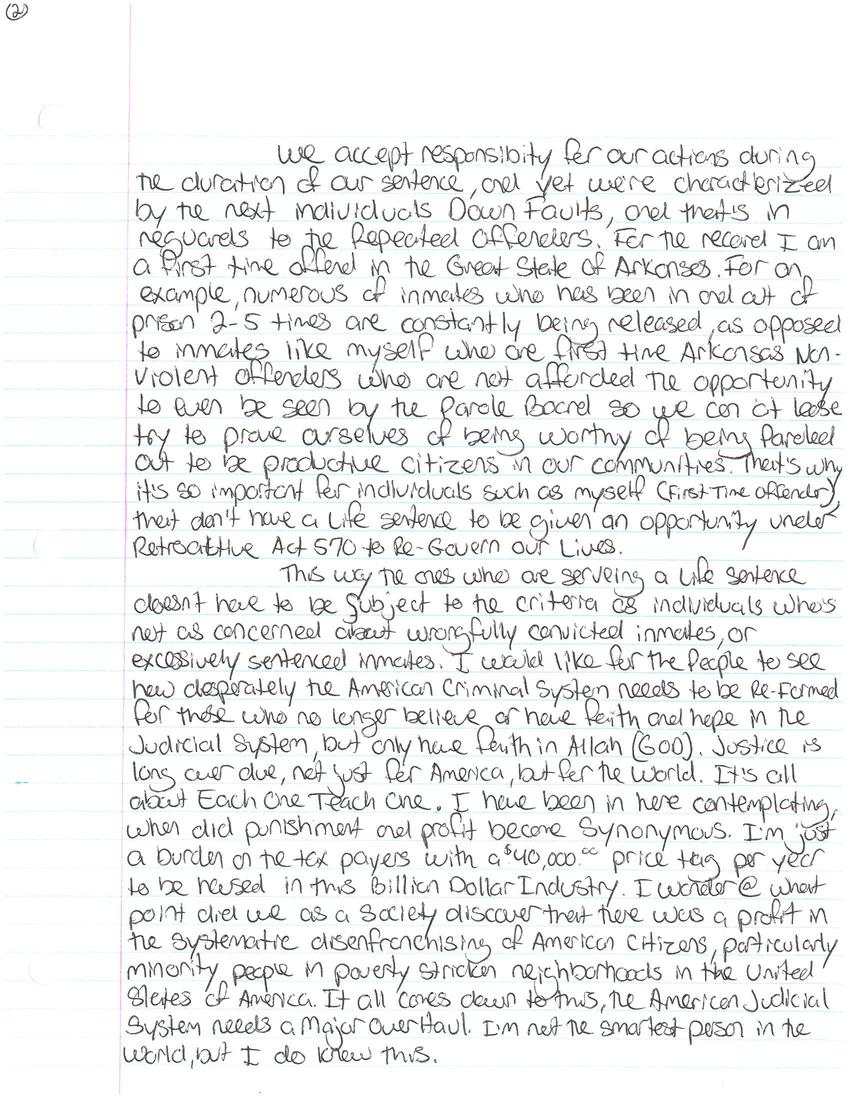 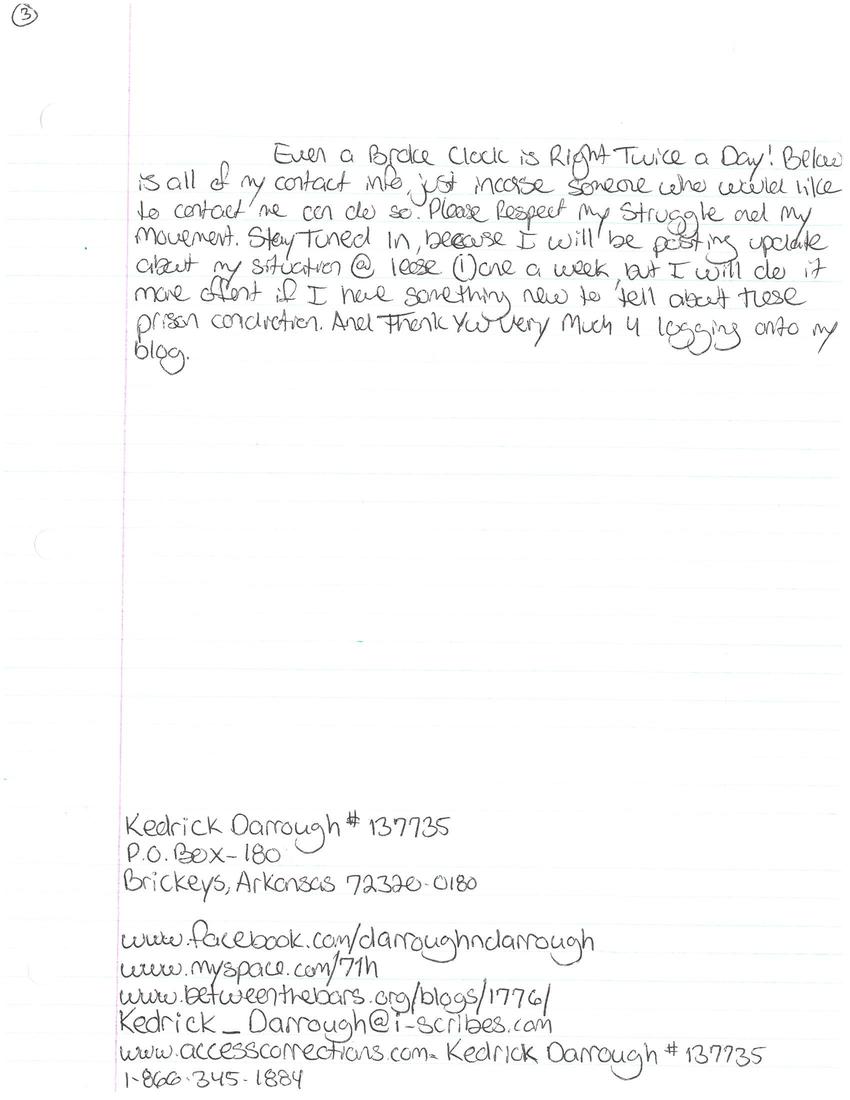 I believe with enough patience and perseverance in striving to achieve and to accomplish the goals that President Barack Obama has set for the American people will enable me to establish a more active role in becoming a productive role model/leader in the community, even if the community is in prison. I see individuals such as myself, unjustly and wrongfully convicted for a victimless non-violent drug offence deem unworthy of mercy through the judicial system, and the Parole Board. But we serve Allah (God) that is our prime example of mercy. The American criminal justice system is exactly that, criminal! I agree that without laws, there would be no order in this world, but who's held accountable for the laws outside of the law? I'm speaking in terms of officers being allowed to unjustly extend a person's sentence based on emotional reasoning, and inflicting punishment without due cause.

Right now I have to serve 21 1/2 years of my life for a victimless non-violent drug offence in which I have already served 7 years of that sentence. That leaves me with 14 1/2 more years to serve before I can be released under the old Act S 5-64-401 law that I was sentenced up under in 2006. Now people that are caught with the same amount of drugs that I was accused of having or more drugs receive less time than me under Act 570 of 2011. We all thought that President Barack Obama eliminated this issue with the Fair Sentencing Act of 2010 that he signed, way back in 2010. We all understand and realize our limitations, and yes, our punishment should fit our crime. Since I've been in here I have seen people come to prison for murder, rape, and robbery and haven't received more than 20 years class B felony, and have been released, came back on parole violation with new charges and was released once again.

We accept responsibility for our actions during the duration of our sentence, and yet we're characterized by the next individual's down faults, and that's in regards to the repeated offenders. For the record I am a first time offend in the great state of Arkansas. For an example, numerous of inmates who has been in and out of prison 2-5 times are constantly being released, as opposed to inmates like myself who are first time Arkansas non-violent offenders who are not afforded the opportunity to even be seen by the Parole Board so we can at least try to prove ourselves of being worthy of being paroled out to be productive citizens in our communities. That's why it's so important for individuals such as myself (first time offender) that don't have a life sentence to be given an opportunity under Retroactive Act 570 to re-govern our lives.

This way the ones who are serving a life sentence doesn't have to be subject to the criteria as individuals who's not as concerned about wrongfully convicted inmates, or excessively sentenced inmates. I would like for the people to see how desperately the American criminal system needs to be reformed for those who no longer believe or have faith and hope in the judicial system, but only have faith in Allah (God). Justice is long overdue, not just for America, but for the world. It's all about Each One Teach One. I have been in here contemplating when did punishment and profit become synonymous. I'm just a burden on the tax payers with a $40,000.00 price tag per year to be housed in this billion dollar industry. I wonder @ what point did we as a society discover that there was a profit in the systematic disenfranchising of American citizens, particularly minority people in poverty stricken neighborhoods in the United States of America. It all comes down to this, the American judicial system needs a major overhaul. I'm not the smartest person in the world, but I do know this.

Even a broke clock is right twice a day! Below is all of my contact info, just in case someone who would like to contact me can do so. Please respect my struggle and my movement. Stay tuned in, because I will be posting update about my situation @ least (1) one a week, but I will do it more often if I have something new to tell about these prison conditions. And thank you very much 4 logging onto my blog.