Reflection On The Iraq War 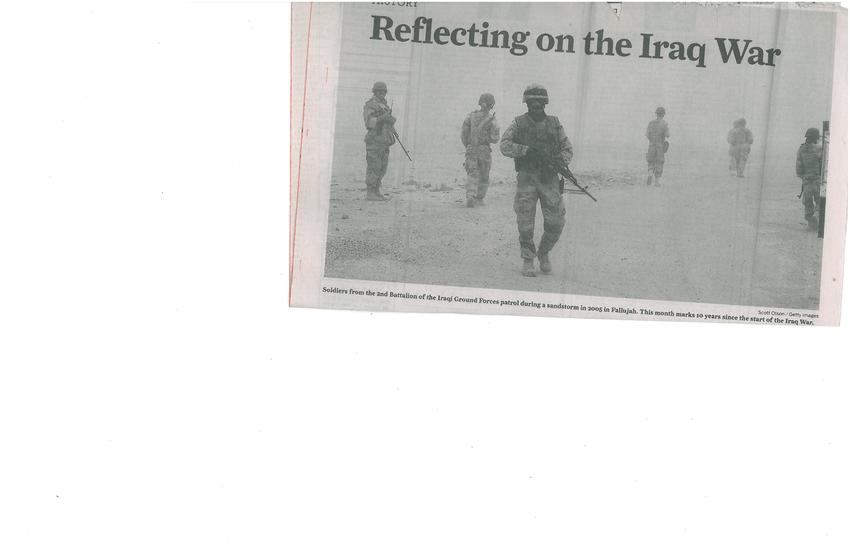 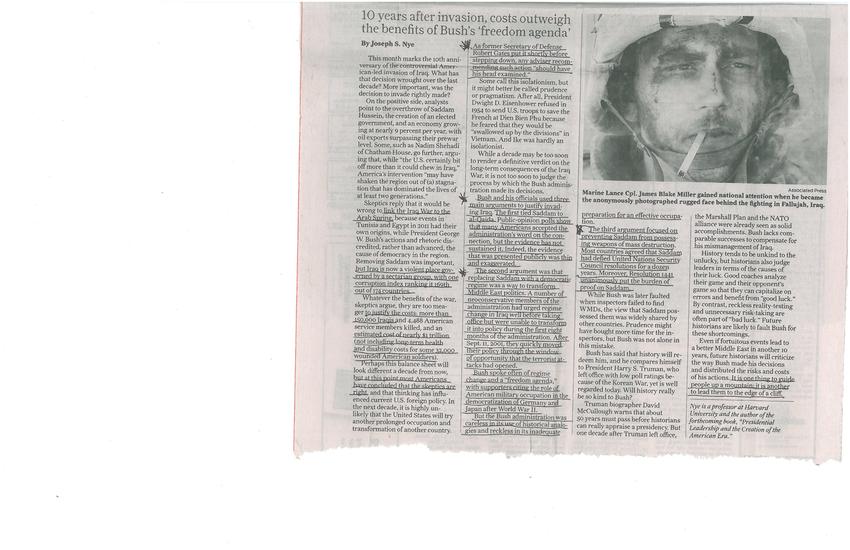 Reflecting on the Iraq War

Soldiers from the 2nd Battalion of the Iraqi Ground Forces patrol during a sandstorm in 2005 in Fallujah. This month marks 10 years since the start of the Iraq War.

This month marks the 10th anniversary of the controversial American-led invasion of Iraq. What has that decision wrought over the last decade? More important, was the decision to invade rightly made?

On the positive side, analysts point to the overthrow of Saddam Hussein, the creation of an elected government, and an economy growing at nearly 9 percent per year, with oil exports surpassing their prewar level. Some, such as Nadim Shehadi of Chatham House, go further, arguing that, while "the U.S. certainly bit off more than it could chew in Iraq", America's intervention "may have shaken that region out of (a) stagnation that has dominated the lives of at least two generations."

Skeptics reply that it would be wrong to link the Iraq War to the Arab Spring, because events in Tunisia and Egypt in 2011 had their own origins, while President George W. Bush's actions and rhetoric discredited, rather than advanced, the cause of democracy in the region. Removing Saddam was important, but Iraq is now a violent place governed by a sectarian group, with one corruption index ranking it 169th out of 174 countries.

Whatever the benefits of the war, skeptics argue, they are too meager to justify the costs, more than 150,000 Iraqis and 4,488 American service members killed, and an estimated cost of nearly $1 trillion (not including long term and health and disability costs for some 32,000 wounded American soldiers).

Perhaps this balance sheet will look different a decade from now, but at this point most Americans have concluded that the skeptics are right, and that thinking has influenced current U.S. foreign policy. In the next decade, it is highly unlikely that the United States will try another prolonged occupation and transformation of another country.

As former Secretary of Defense Robert Gates put it shortly before stepping down, any adviser recommending such action "should have his head examined".

Some call this isolationism, but it might better be called prudence or pragmatism. After all, President Dwight D. Eisenhower refused in 1954 to send U.S. troops to save the French at Dien Bien Phu because he feared that they would be "swallowed up by the divisions" in Vietnam. And Ike was hardly an isolationist.

While a decade may be too soon to render a definitive verdict on the long-term consequences of the Iraq War, it is not too soon to judge the process by which the Bush administration made its decisions.

Bush and his officials used three main arguments to justify invading Iraq. The first tied Saddam to al-Qaeda. Public opinion polls show that many Americans accepted the administration's word on the connection, but the evidence has not sustained it. Indeed,the evidence that was presented publicly was thin and exaggerated.

The second argument was that replacing Saddam with a democratic regime was a way to transform Middle East politics. A number of neoconservative members of the administration had urged regime change in Iraq well before taking office but were unable to transform it into policy during the first eight months of the administration. After Sept. 11, 2001, they quickly moved their policy through the window of opportunity that the terrorist attacks had opened.

Bush spoke often of regime change and a "freedom agenda", with supporters citing the role of American military occupation in the democratization of Germany and Japan after World War II.

But the Bush administration was careless in its use of historical analogies and reckless in its inadequate preparation for an effective occupation.

The third argument focused on preventing Saddam from possessing weapons of mass destruction. Most countries agreed that Saddam had defied United Nations Security Council resolutions for a dozen years. Moreover, Resolution 144L unanimously put the burden of proof on Saddam.

While Bush was later faulted when inspectors failed to find WMDs, the view that Saddam possessed them was widely shared by other countries. Prudence might have bought more time for the inspectors, but Bush was not alone in this mistake.

Bush has said that history will redeem him, and he compares himself to President Harry S. Truman, who left office with low poll ratings because of the Korean War, yet is well regarded today. Will history really be so kind to Bush?

Truman biographer David McCullough warns that about 50 years must pass before historians can really appraise a presidency. But one decade after Truman left office, the Marshall Plan and the NATO alliance were already seen as solid accomplishments. Bush lacks comparable successes to compensate for his mismanagement of Iraq.

History tends to be unkind to the unlucky, but historians also judge leaders in terms of the causes of their luck. Good coaches analyze their game and their opponent's game so that they can capitalize on errors and benefit from "good luck". By contrast, reckless reality-testing and unnecessary risk-taking are often part of "bad luck". Future historians are likely to fault Bush for these shortcomings.

Even if fortuitous events lead to a better Middle East in another 10 years, future historians will criticize the way Bush made his decisions and distributed the risks and costs of his actions. It is one thing to guide people up a mountain; it is another to lead them to the edge of a cliff.

Nye is a professor at Harvard University and the author of the forthcoming books, "Presidential Leadership and the Creation of the American Eru."