A Brief History of Shirleyworld - The Madness Journals - Chapter III 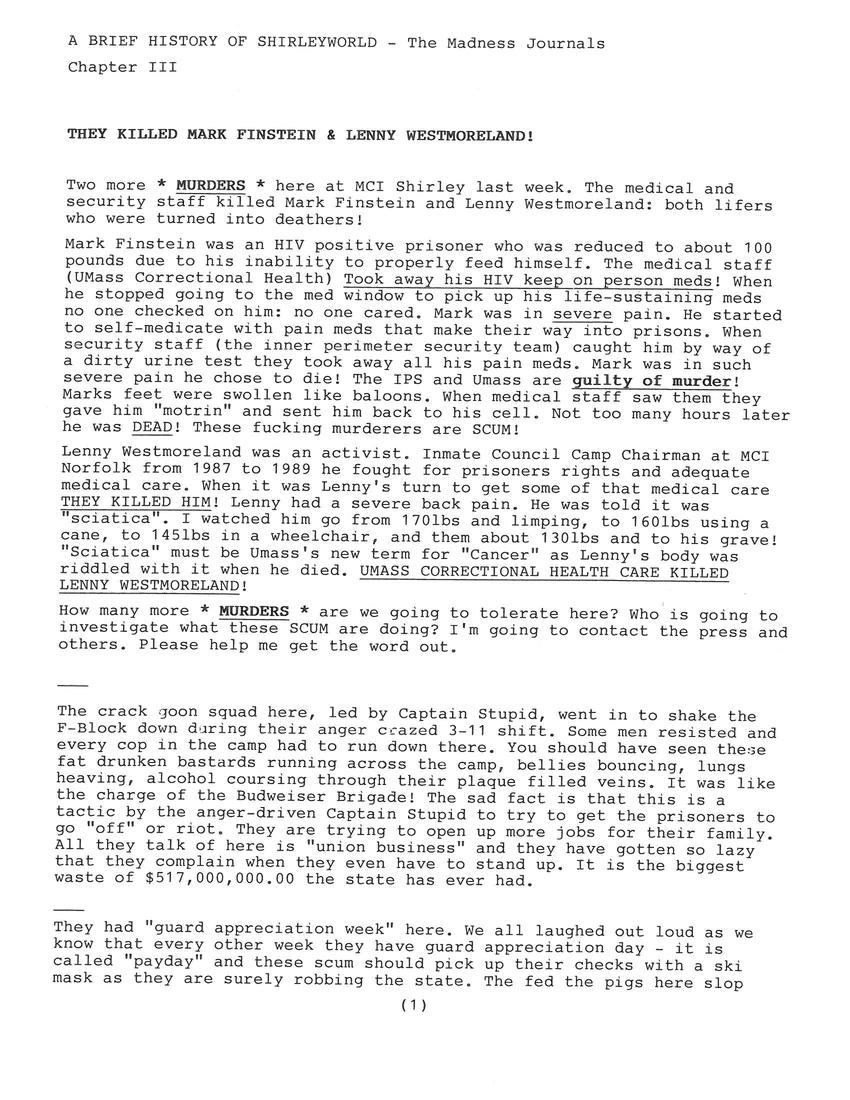 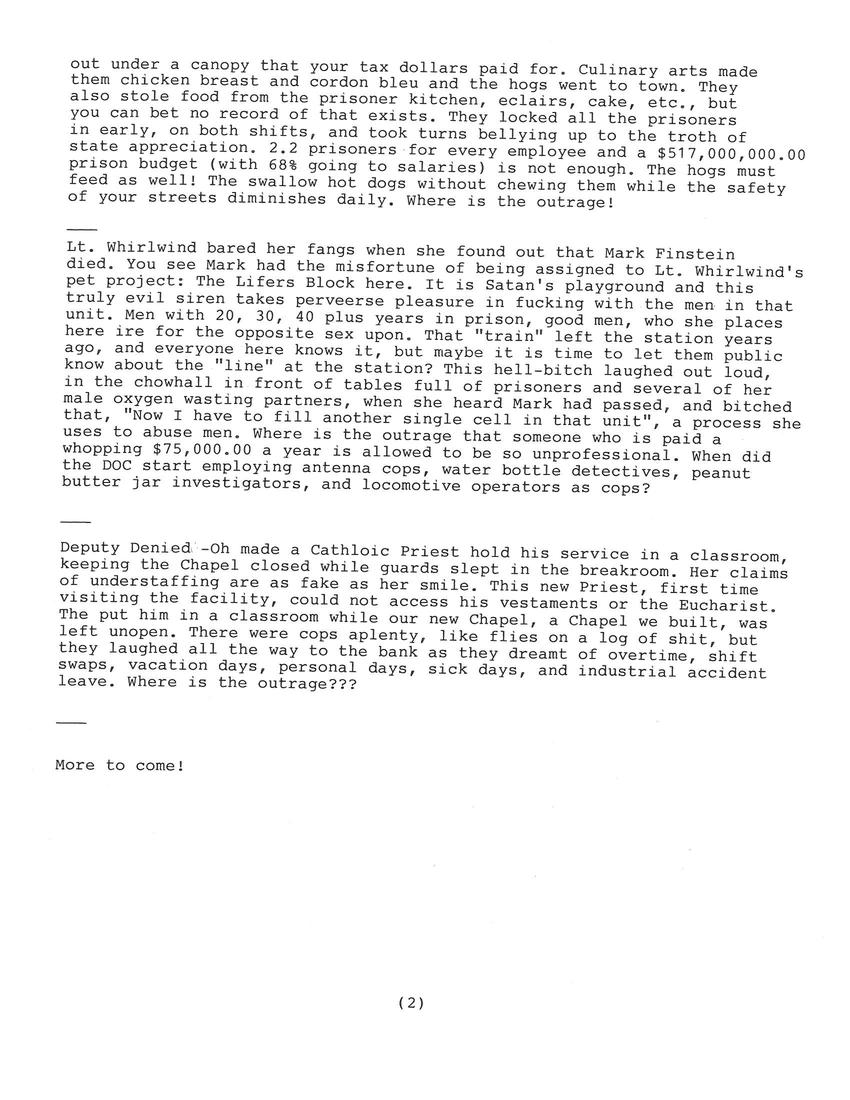 A BRIEF HISTORY OF SHIRLEYWORLD - The Madness Journals
Chapter III

Mark Finstein was an HIV positive prisoner who was reduced to about 100 pounds due to his inability to properly feed himself. The medical staff (UMass Correctional Health) TOOK AWAY HIS HIV KEEP ON PERSON MEDS! When he stopped going to the med window to pick up his life-sustaining meds no one checked on him: no one cared. Mark was in SEVERE pain. He started to self-medicate with pain meds that make their way into prisons. When security staff (the inner perimeter security team) caught him by way of a dirty urine test they took away all his pain meds. Mark was in such severe pain he chose to die! The IPS and Umass are GUILTY OF MURDER! Mark's feet were swollen like balloons. When medical staff saw them they gave him "motrin" and sent him back to his cell. Not too many hours later he was DEAD! These fucking murderers are SCUM!

Lenny Westmoreland was an activist. Inmate Council Camp Chairman at MCI Norfolk from 1987 to 1989 he fought for prisoners rights and adequate medical care. When it was Lenny's turn to get some of that medical care THEY KILLED HIM! Lenny had a severe back pain. He was told it was "sciatica." I watched him go from 170 lbs and limping, to 160 lbs using a cane, to 145 lbs in a wheelchair, and then about 130 lbs and to his grave! "Sciatica" must be Umass's new term for "Cancer" as Lenny's body was riddled with it when he died. UMASS CORRECTIONAL HEALTH CARE KILLED LENNY WESTMORELAND!

How many more * MURDERS * are we going to tolerate here? Who is going to investigate what these SCUM are doing? I'm going to contact the press and others. Please help me get the word out.

The crack goon squad here, led by Captain Stupid, went in to shake the F-Block down during their anger crazed 3-11 shift. Some men resisited and every cop in the camp had to run down there. You should have seen these fat drunken bastards running across the camp, bellies bouncing, lungs heaving, alcohol coursing through their plaque filled veins. It was like the charge of the Budweiser Brigade! The sad fact is that this is a tactic by the anger-driven Captain Stupid to try to get the prisoners to go "off" or riot. They are trying to open up more jobs for their family. All they talk of here is "union business" and they have gotten so lazy that they complain when they even have to stand up. It is the biggest waste of $517,000,000.00 the state has ever had.

They had "guard appreciation week" here. We all laughed out loud as we know that every other week they ahve guard appreciation day - it is called "payday" and these scum should pick up their checks with a ski mask as they are surely robbing the state. They fed the pigs here slop out under a canopy that your tax dollars paid for. Culinary arts made them chicken breast and cordon bleu and the hogs went to town. They also stole food from the prisoner kitchen, eclairs, cake, etc., but you can bet no record of that exists. They locked all the prisoners in early, on both shifts, and took turns bellying up to the troth of state appreciation. 2.2 prisoners for every employee and a $517,000,000.00 prison budget (with 68% going to salaries) is not enough. The hogs must feed as well! They swallow hot dogs without chewing them while the safety of your streets diminishes daily. Where is the outrage?

Lt. Whirlwind bared her fangs when she found out that Mark Finstein died. You see Mark had the misfortune of being assigned to Lt. Whirlwind's pet project: The Lifers Block here. It is Satan's playground and this truly evil siren takes perverse pleasure in fucking with the men in that unit. Men with 20, 30, 40 plus years in prison, good men, who she places her ire for the opposite sex upon. That "train" left the station years ago, and everyone here knows it, but maybe it is time to let the public know about the "line" at the station? This hell-bitch laughed out loud, in the chowhall in front of tables full of prisoners and several of her male oxygen wasting partners, when she heard Mark had passed, and bitched that, "Now I have to fill another single cell in that unit," a process she uses to abouse men. Where is the outrage that someone who is paid a whoping $75,000.00 a year is allowed to be so unprofessional? When did the DOC start employing antenna cops, water bottle detectives, peanut butter jar investigators, and locomotive operators as cops?

Deputy Denied-Oh made a Catholic priest hold his service in a classroom, keeping the Chapel closed while guards slept in the breakroom. Her claims of understaffing are as fake as her smile. This new priest, first time visiting the facility, could not access his vestaments or the Eucharist. They put him in a classroom while our new Chapel, a Chapel we built, was left unopen. There were cops aplenty, like flies on a log of shit, but they laughed all the way to the bank as they dreamt of overtime, shift swaps, vacation days, personal days, sick days, and industrial accident leave. Where is the outrage???

Thanks for writing! I finished the transcription for your post.
What a thoroughly unpleasant person you are! You will use the deaths of 2 men to feed your hate for the system and the total inadequacy that is your life past and present.

And the Beat(down) Goes On: Ken Seguin

You do recognise that post don't you. He is every bit(and more)the activist you claim to be but he sees the deaths as suicide because they didn't want to go to medical. He claims that his friends wanted to take him to medical but you claim no-one cared.

The hate within you is eating you alive. All can see it. You have nothing good to say about any employee of the DOC but demand respect from those same people. If they hated you half as much as you so vocally hate them your sorry ass wouldn't see daylight for the next 15 years and we may be spared your repetitive inane garbage on BTW.

There is a reason that I am about the only one wasting their precious time commenting........they probably quickly change the page when they see your name attached to a post.
I second this comment. I generally whizz past posts by this author. His hatred and venom are immortalized.
One thing positive in the posts from the author in question is his obvious knowledge of the law garnered during his incarceration. He is obviously intelligent and it's a shame to see him waste the few positive outlets he has by these hate and venom filled posts. My wish is that he would continue his quest for legal knowledge and be all that he can be within the confines of the system. His rantings detract from the possible benefits his intellect allows him.
In my experience, it's so hard to tell about medical care in prisons. They often do offer adequate (and sometimes even good) care.

But, when they don't, there is no way to tell. There is no accountability in the system because it is so closed.

You'd be surprised how common/how easy it is for the system to lie and justify their behavior.

It's just so hard to tell.

I've also seen cases where the inmates knew just what happened to one of their peers and were justified in their complaints. Other times, they thought that they had all the information - but were missing an important piece of information (HIPPA regulations and all).

IME, Inmates need 'their people' watching out for them - from the outside - in order to ensure that they get what they need.
(scanned reply – view as blog post)
uploaded Sept. 20, 2013.  Original (PDF)

I am not sure what meds this deranged person is on but I suspect that he needs further professional help.

W T F is Laura and why would I need to change my name to respond to your vitriol. Mirror....E F ? I'm not sure even he knows what he is talking about.

Clearly your mental state demands immediate attention. There must be someone out there that could help him but said person would need to be some kind of miracle worker.

I had a rewarding career putting myself in harms way to defend others. You, on the other hand, had a profligate career as a self indulging drug user, criminal and ultimately ending up in prison for murder. Not much difference between us then!

Your religious epiphany says it all. Selective application of love thy neighbour clearly ends at the door to your cell not extending to anyone in DOC. Another self-serving indulgence.

Your mention of skirts caused me to ponder if, in your situation, you were a pitcher or a catcher. Given your whiny nature and your constitution it seems certain that you are a catcher.......correct me if I'm wrong!

This is something you should talk to psych about. It is called 'Narcissistic Personality Disorder'

You believe that using your full name lends gravitas and authority to your drivel. In fact it is a barrier to your audience. It feels a bit ostentatious, even priggish. Us mere mortals can get by perfectly well without its use.