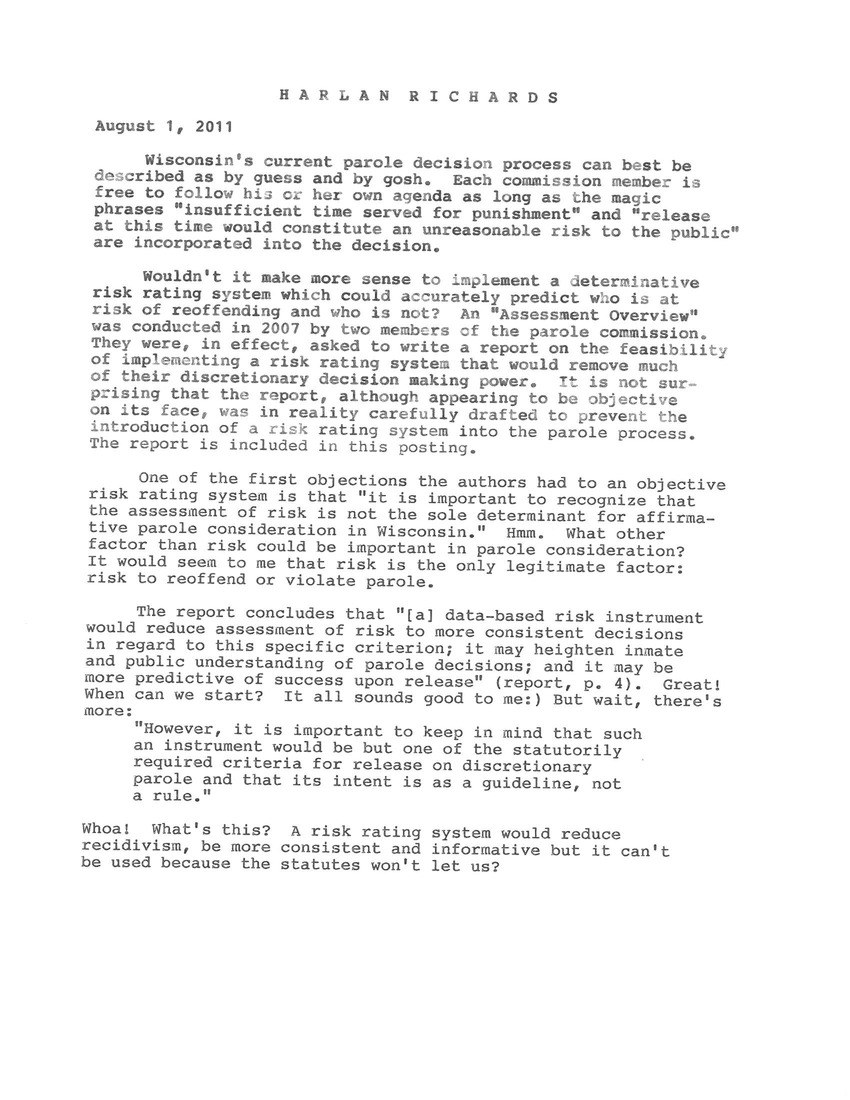 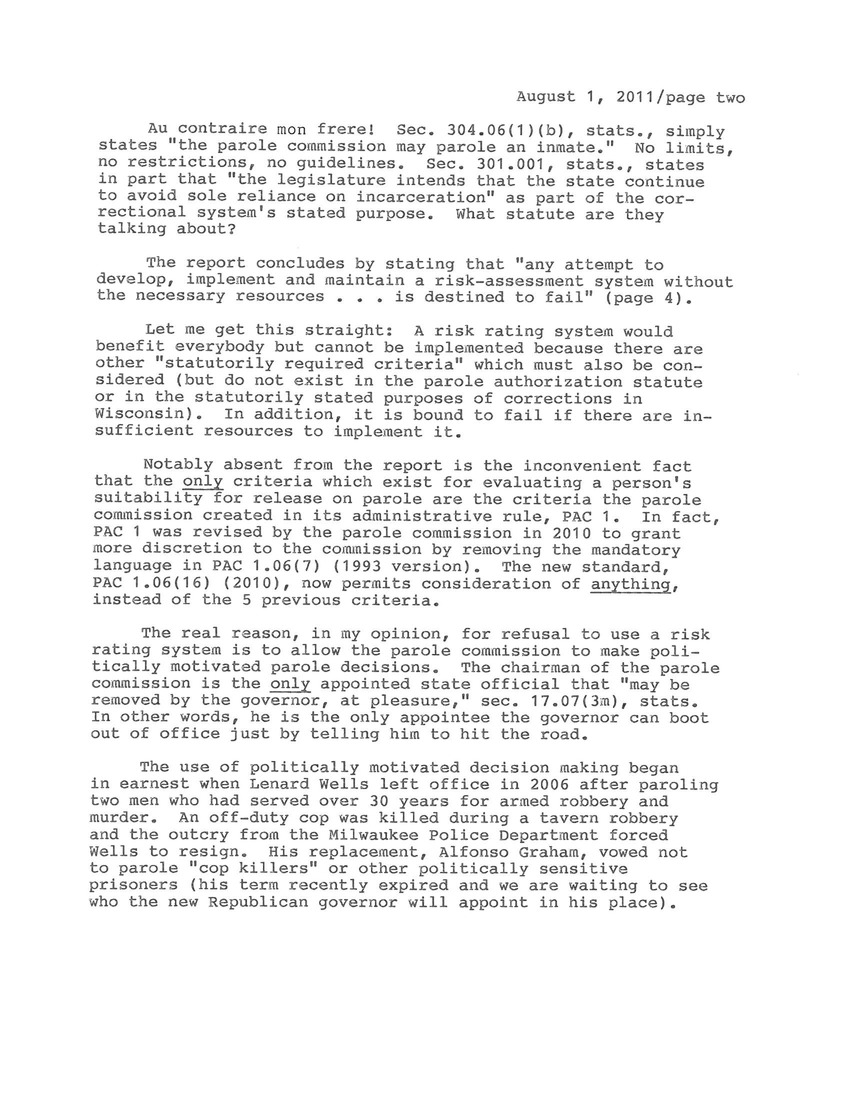 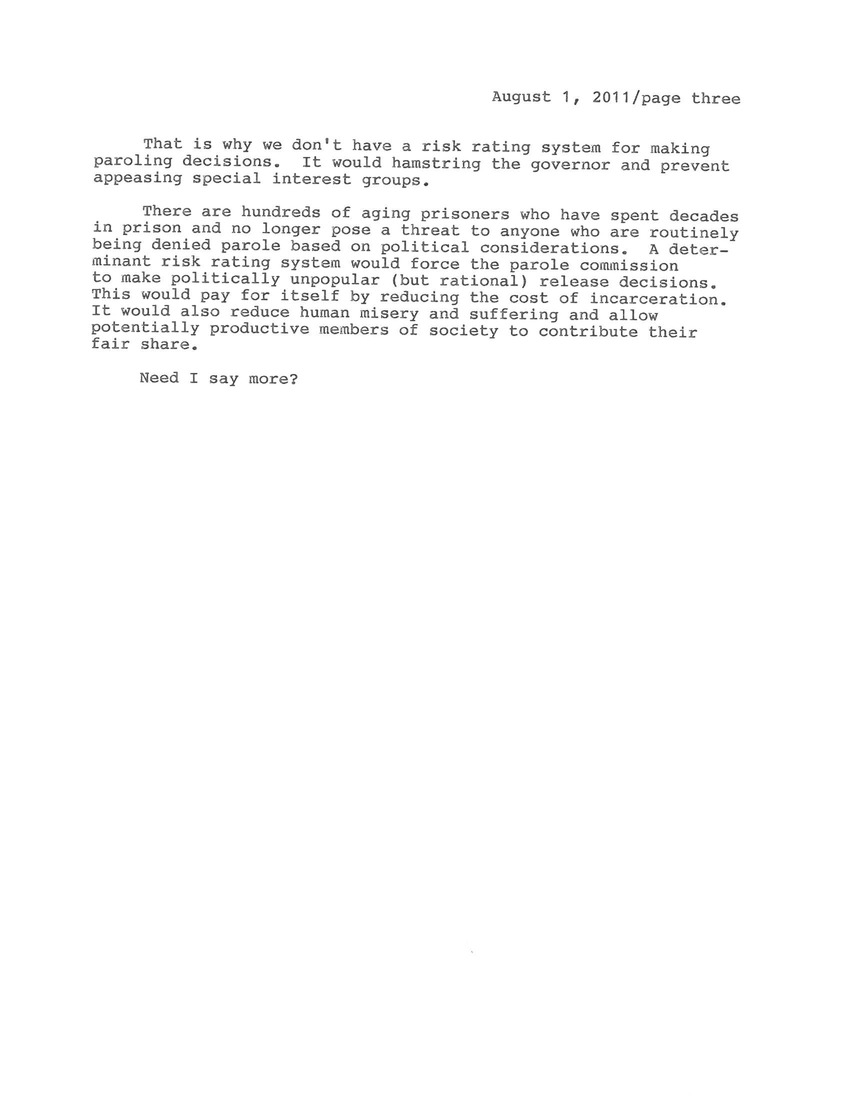 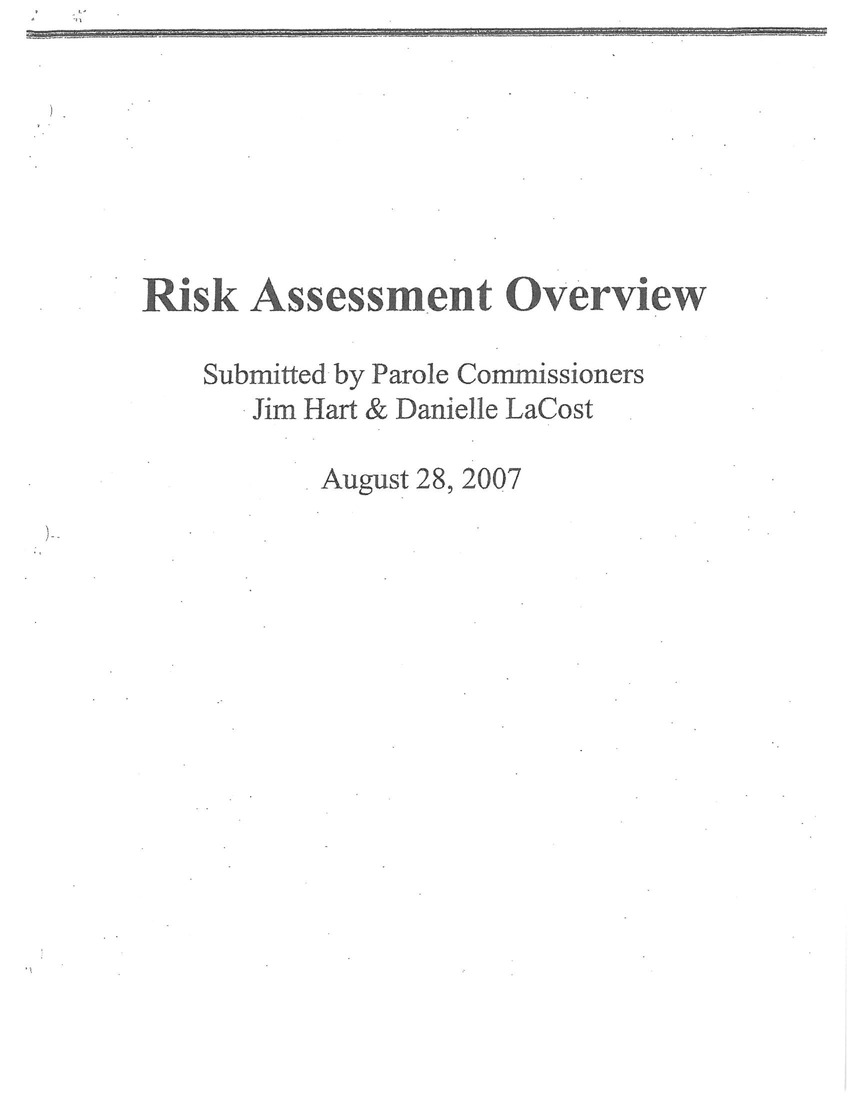 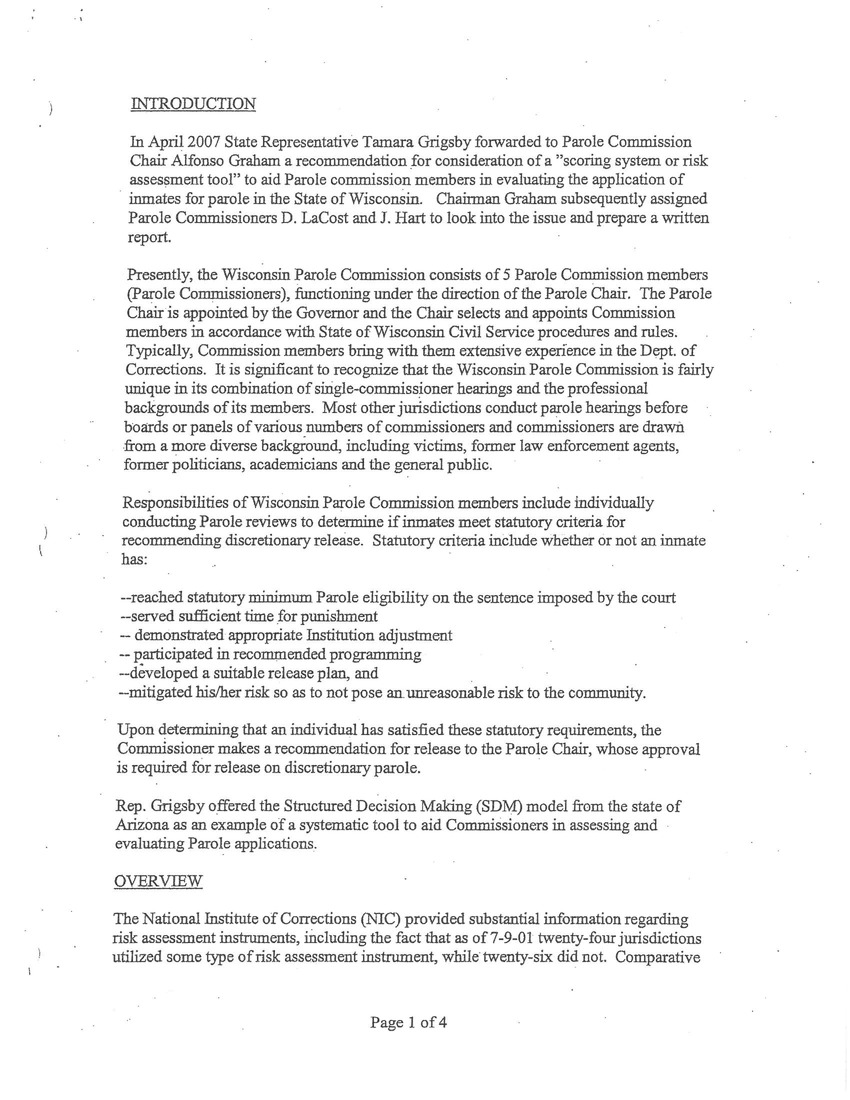 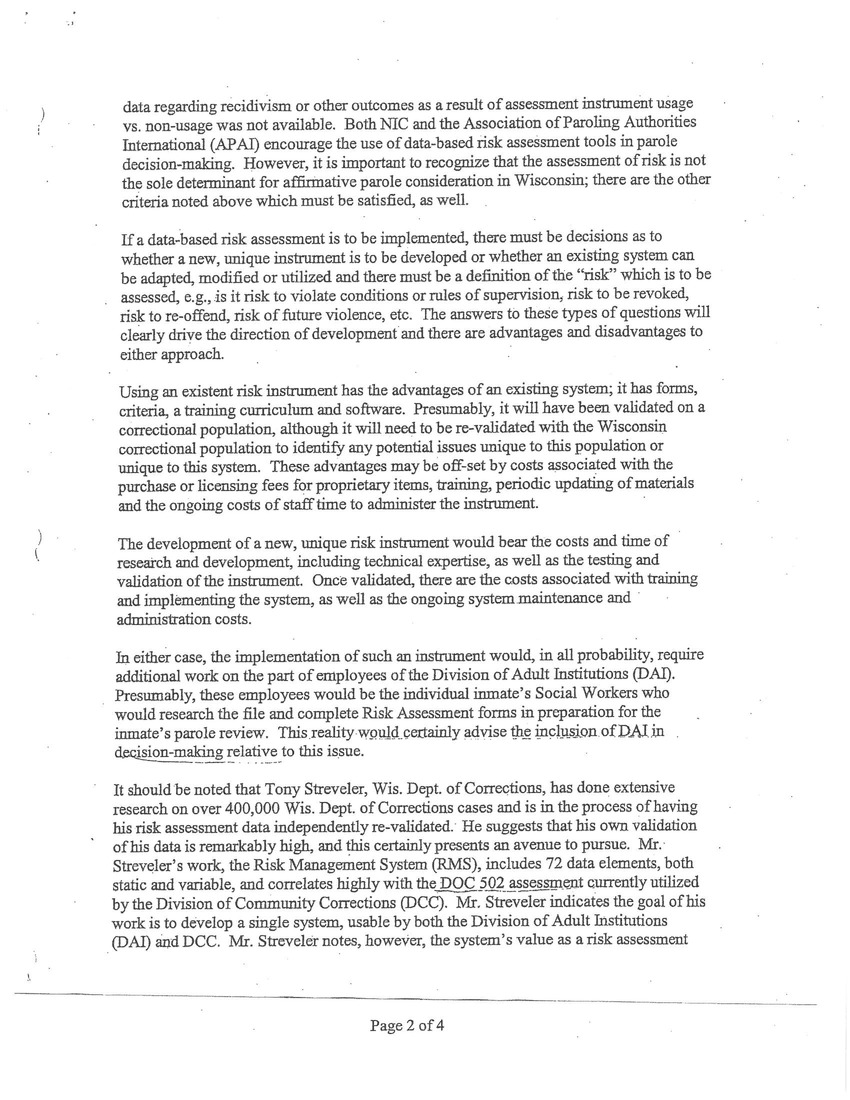 Wisconsin's current parole decision process can best be described as by guess and by gosh. Each commission member is free to follow his or her own agenda as long as the magic phrases "insufficient time served for punishment" and "release at this time would constitute an unreasonable risk to the public" are incorporated into the decision.

Wouldn't it make more sense to implement a determinative risk rating system which could accurately predict who is at risk of reoffending and who is not? An "Assessment Overview" was conducted in 2007 by two members of the parole commission. They were, in effect, asked to write a report on the feasibility of implementing a risk rating system that would remove much of their discretionary decision making power. It is not surprising that the report, although appearing to be objective on its face, was in reality carefully drafted to prevent the introduction of a risk rating system into the parole process. The report is included in this posting.

One of the first objections the authors had to an objective risk rating system is that "it is important to recognize that the assessment of risk is not the sole determinant for affirmative parole consideration in Wisconsin." Hmm. What other factor than risk could be important in parole consideration? It would seem to me that risk is the only legitimate factor: risk to reoffend or violate parole.

The report concludes that "[a] data-based risk instrument would reduce assessment of risk to more consistent decisions in regard to this specific criterion; it may heighten inmate and public understanding of parole decisions; and it may be more predictive of success upon release" (report, p. 4). Great! When can we start? It all sounds good to me :) But wait, there's more:
"However, it is important to keep in mind that such an instrument would be but one of the statutorily required criteria for release on discretionary parole and that its intent is as a guideline, not a rule."

Whoa! What's this? A risk rating system would reduce recidivism, be more consistent and informative but it can't be used because the statutes won't let us?

Au contraire mon frere! Sec. 304.06(1)(b), stats., simply states "the parole commission may parole an inmate." No limits, no restrictions, no guidelines. Sec. 301.001, stats., states in part that "the legislature intends that the state continue to avoid sole reliance on incarceration" as part of the correctional system's stated purpose. What statute are they talking about?

The report concludes by stating that "any attempt to develop, implement and maintain a risk-assessment system without the necessary resources ... is destined to fail" (page 4).

Let me get this straight: A risk rating system would benefit everybody but cannot be implemented because there are other "statutorily required criteria" which must also be considered (but do not exist in the parole authorization statute or in the statutorily stated purposes of corrections in Wisconsin). In addition, it is bound to fail if there are insufficient resources to implement it.

Notably absent from the report is the inconvenient fact that the only criteria which exist for evaluating a person's suitability for release on parole are the criteria the parole commission created in its administrative rule, PAC 1. In fact, PAC 1 was revised by the parole commission in 2010 to grant more discretion to the commission by removing the mandatory language in PAC 1.06(7) (1993 version). The new standard, PAC 1.06(16) (2010), now permits consideration of anything, instead of the 5 previous criteria.

The real reason, in my opinion, for refusal to use a risk rating system is to allow the parole commission to make politically motivated parole decisions. The chairman of the parole commission is the only appointed state official that "may be removed by the governor, at pleasure," sec. 17.07 (3m), stats. In other words, he is the only appointee the governor can boot out of office just by telling him to hit the road.

The use of politically motivated decision making began in earnest when Lenard Wells left office in 2006 after paroling two men who had served over 30 years for armed robbery and murder. An off-duty cop was killed during a tavern robbery and the outcry from the Milwaukee Police Department forced Wells to resign. His replacement, Alfonso Graham, vowed not to parole "cop killers" or other politically sensitive prisoners (his term recently expired and we are waiting to see who the new Republican governor will appoint in his place).

That is why we don't have a risk rating system for making parole decisions. It would hamstring the governor and prevent appeasing special interest groups.

There are hundreds of aging prisoners who have spent decades in prison and no longer pose a threat to anyone who are routinely being denied parole based on political considerations. A determinant risk rating system would force the parole commission to make politically unpopular (but rational) release decisions. This would pay for itself by reducing the cost of incarceration. It would also reduce human misery and suffering and allow potentially productive members of society to contribute their fair share.

In April 2007 State Representative Tamara Grigsby forwarded to Parole Commission Chair Alfonso Graham a recommendation for consideration of a "scoring system or risk assessment tool" to aid Parole commission members in evaluating the application of inmates for parole in the State of Wisconsin. Chairman Graham subsequently assigned Parole Commissioners D. LaCost and J. Hart to look into the issue and prepare a written report.

Responsibilities of Wisconsin Parole Commission members include individually conducting Parole reviews to determine if inmates meet statutory criteria for recommending discretionary release. Statutory criteria include whether or not an inmate has:

--reached statutory minimum Parole eligibility on the sentence imposed by the court
--served sufficient time for punishment
--demonstrated appropriate Institution adjustment
--participated in recommended programming
--developed a suitable release plan, and
--mitigated his/her risk so as to not pose an unreasonable risk to the community.

Upon determining that an individual has satisfied these statutory requirements, the Commissioner makes a recommendation for release to the Parole Chair, whose approval is required for release on discretionary parole.

Rep. Grigsby offered the Structured Decision Making (SDM) model from the state of Arizona as an example of a systematic tool to aid Commissioners in assessing and evaluating Parole applications.

The National Institute of Corrections (NIC) provided substantial information regarding risk assessment instruments, including the fact that as of 7-9-01 twenty-four jurisdictions utilized some type of risk assessment instrument, while twenty-six did not. Comparative data regarding recidivism or other outcomes as a result of assessment instrument usage vs. non-usage was not available. Both NIC and the Association of Paroling Authorities International (APAI) encourage the use of data-based risk assessment tools in parole decision-making. However, it is important to recognize that the assessment of risk is not the sole determinant for affirmative parole consideration in Wisconsin; there are the other criteria noted above which must be satisfied, as well.

If a data-based risk assessment is to be implemented, there must be decisions as to whether a new, unique instrument is to be developed or whether an existing system can be adapted, modified or utilized and there must be a definition of the "risk" which is to be assessed, e.g., is it risk to violate conditions or rules of supervision, risk to be revoked, risk to re-offend, risk of future violence, etc. The answers to these types of questions will clearly drive the direction of development and there are advantages and disadvantages to either approach.