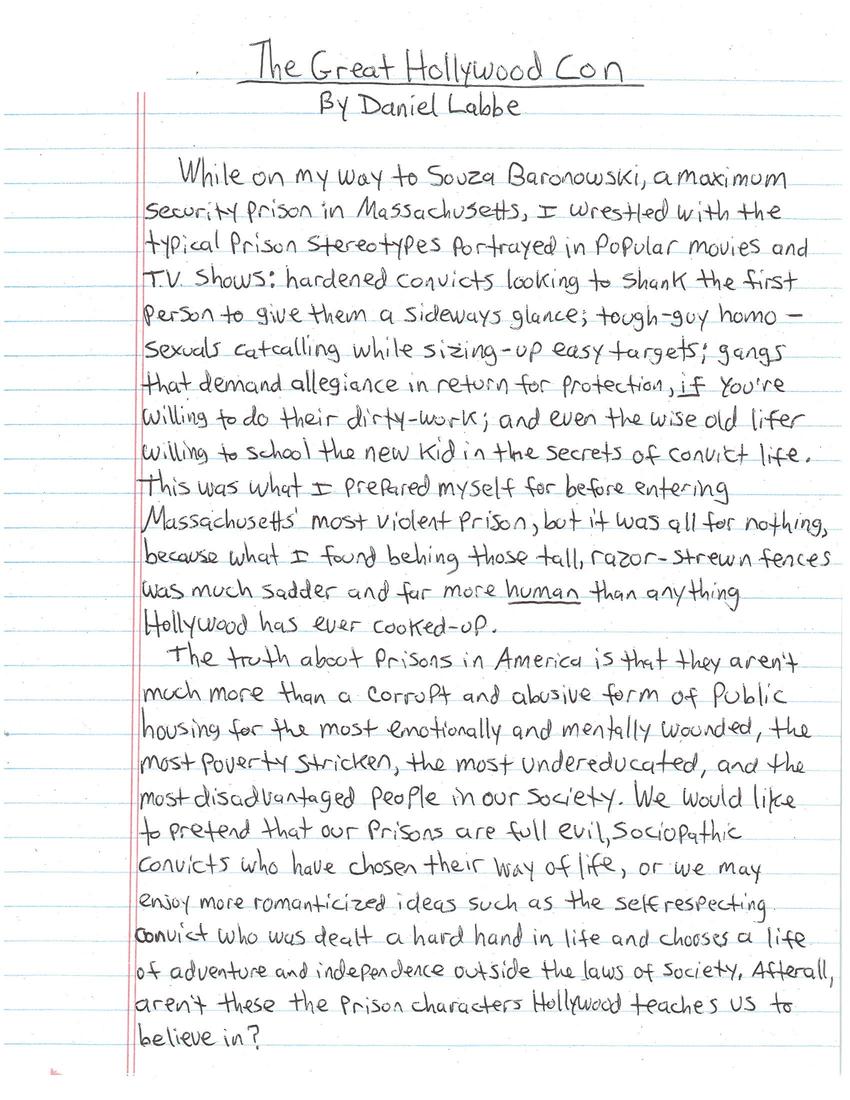 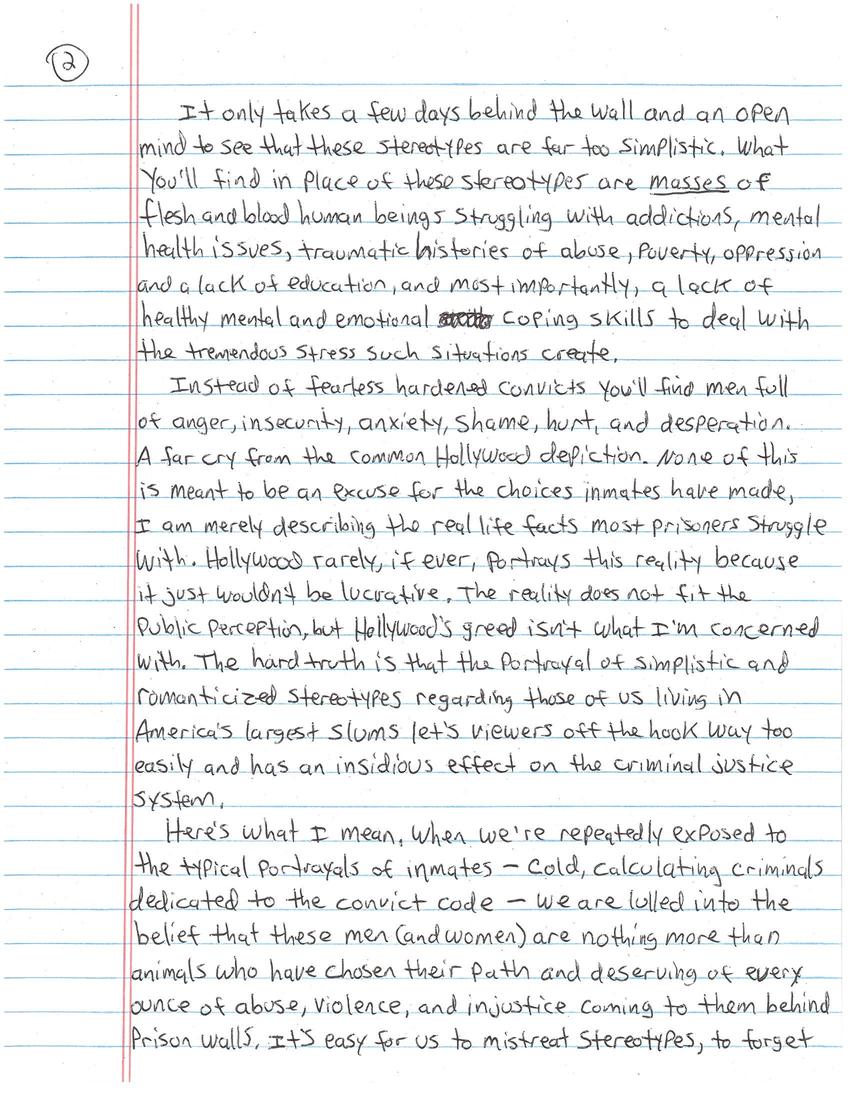 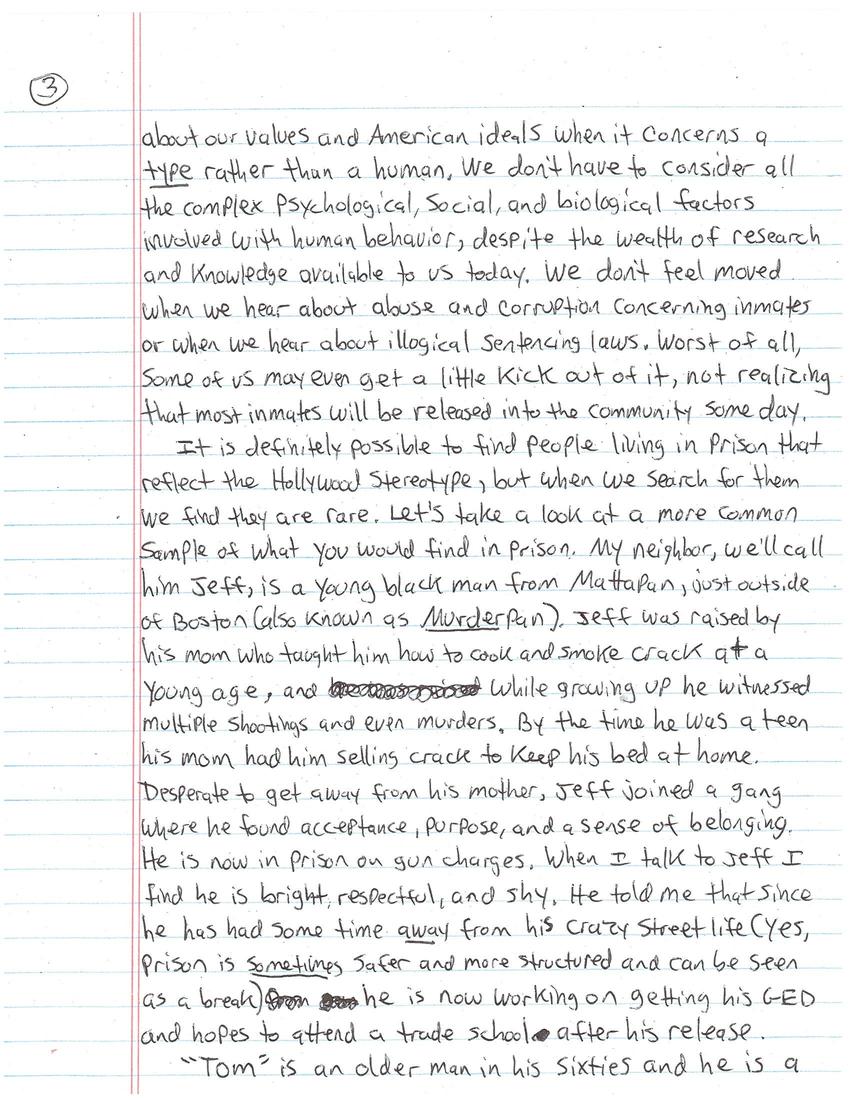 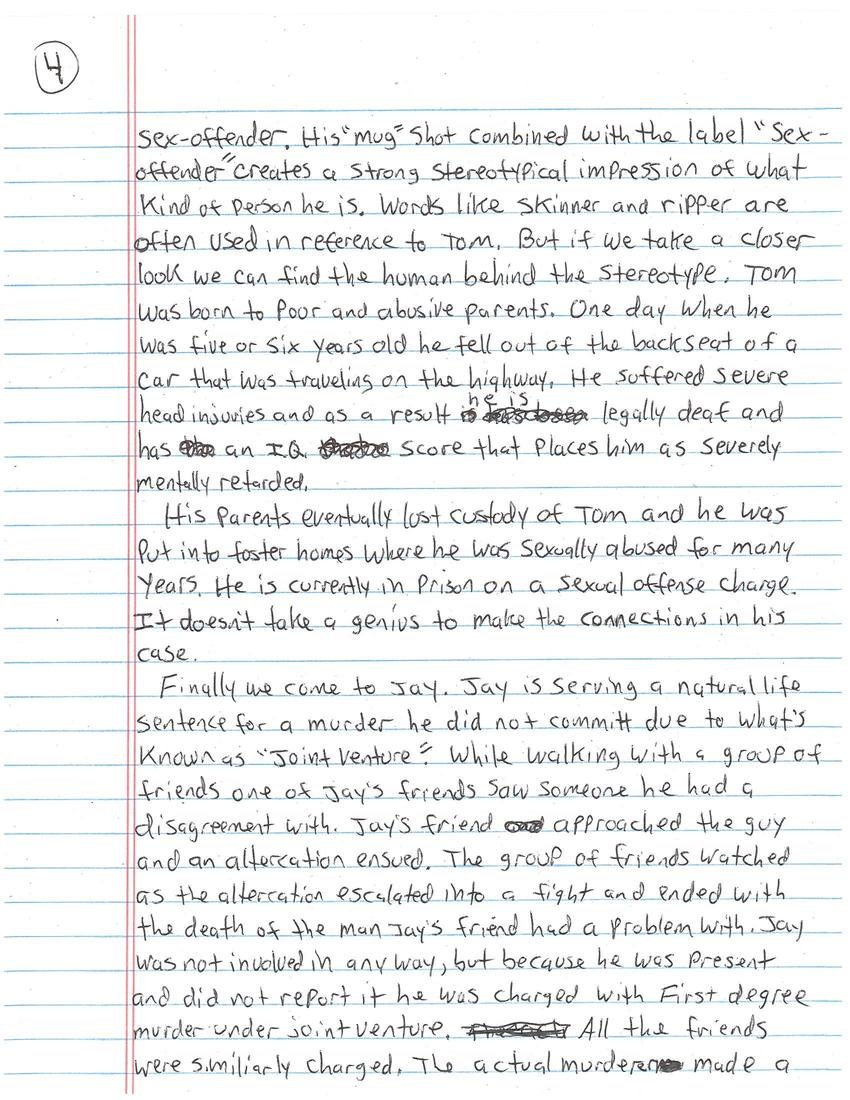 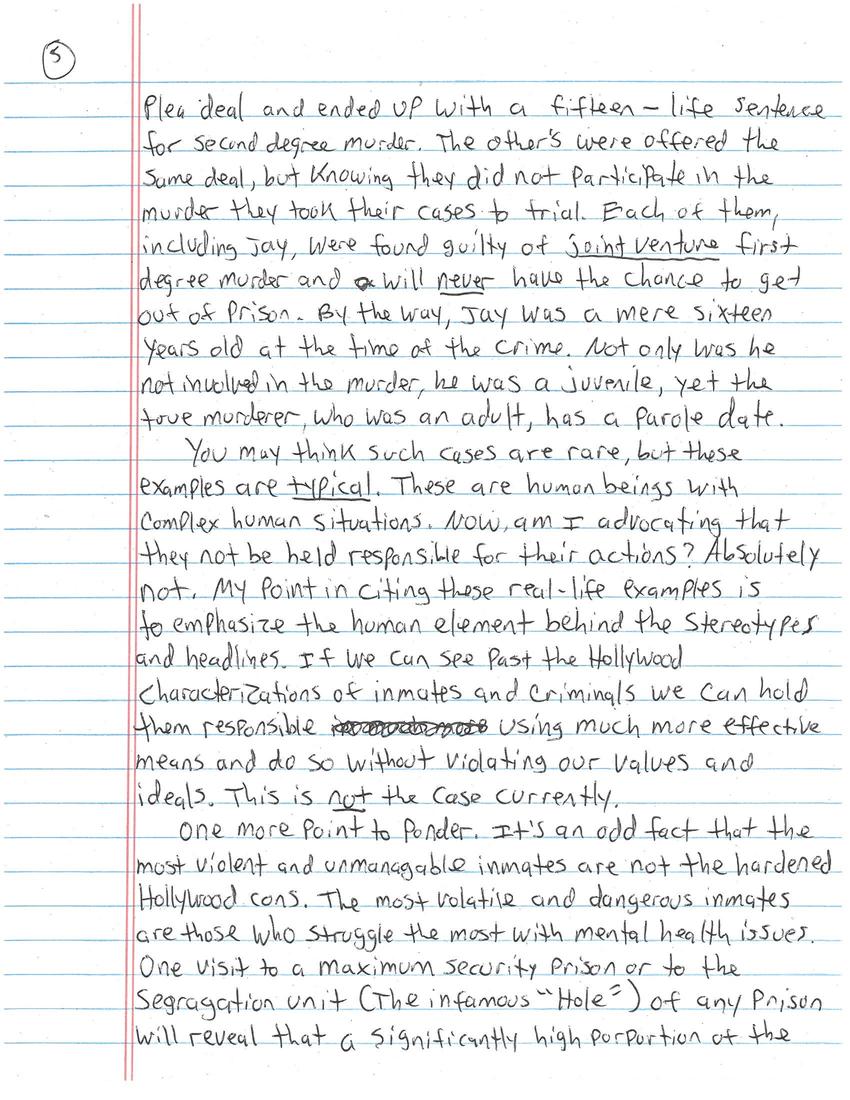 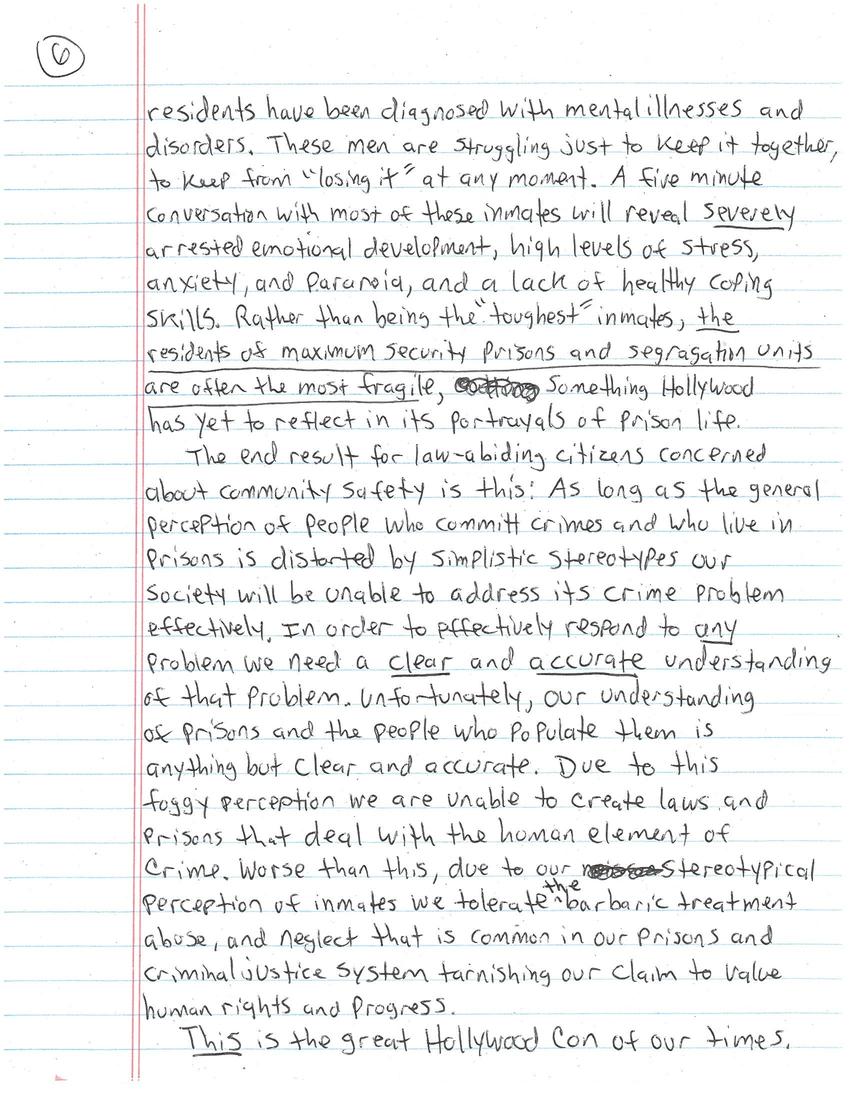 While on my way to Souza Baronowski, a maximum security prison in Massachusetts, I wrestled with the typical prison stereotypes portrayed in popular movies and T.V. shows: hardened convicts looking to shank the first person to give them a sideways glance; tough-guy homosexuals catcalling while sizing-up easy targets; gangs that demand allegiance in return for protection, IF you're willing to do their dirty-work; and even the wise old lifer willing to school the new kid in the secrets of convict life. This was what I prepared myself for before entering Massachusetts' most violent prison, but it was all for nothing, because what I found behind those tall, razor-strewn fences was much sadder and far more HUMAN than anything Hollywood has ever cooked-up.

The truth about prisons in America is that they aren't much more than a corrupt and abusive form of public housing for the most emotionally and mentally wounded, the most poverty stricken, the most undereducated, and the most disadvantaged people in our society. We would like to pretend that our prisons are full evil, sociopathic convicts who have chosen their way of life, or we may enjoy more romanticized ideas such as the self respecting convict who was dealt a hard hand in life and chooses a life of adventure and independence outside the laws of society. After all, aren't these the prison characters Hollywood teaches us to believe in?

It only takes a few days behind the wall and an open mind to see that these stereotypes are far too simplistic. What you'll find in place of these stereotypes are MASSES of flesh and blood human beings struggling with addictions, mental health issues, traumatic histories of abuse, poverty, oppression and a lack of education, and most importantly, a lack of healthy mental and emotional coping skills to deal with the tremendous stress such situations create.

Instead of fearless hardened convicts you'll find men full of anger, insecurity, anxiety, shame, hurt, and desperation. A far cry from the common Hollywood depiction. None of this is meant to be an excuse for the choices inmates have made, I am merely describing the real life facts most prisoners struggle with. Hollywood rarely, if ever, portrays this reality because it just wouldn't be lucrative. The reality does not fit the public perception, but Hollywood's greed isn't what I'm concerned with. The hard truth is that the portrayal of simplistic and romanticized stereotypes regarding those of us living in America's largest slums lets viewers off the hook way too easily and has an insidious effect on the criminal justice system.

Here's what I mean, when we're repeatedly exposed to the typical portrayals of inmates - cold, calculating criminals dedicated to the convict code - we are lulled into the belief that these men (and women) are nothing more than animals who have chosen their path and deserving of every ounce of abuse, violence, and injustice coming to them behind prison walls. It's easy for us to mistreat stereotypes, to forget about our values and American ideals when it concerns a TYPE rather than a human. We don't have to consider all the complex psychological, social, and biological factors involved with human behavior, despite the wealth of research and knowledge available to us today. We don't feel moved when we hear about abuse and corruption concerning inmates or when we hear about illogical sentencing laws. Worst of all, some of us may even get a little kick out of it, not realizing that most inmates will be released into the community someday.

It is definitely possible to find people living in prison that reflect the Hollywood stereotype, but when we search for them we find they are rare. Let's take a look at a more common sample of what you would find in prison. My neighbor, we'll call him Jeff, is a young black man from Mattapan, just outside of Boston (also known as MURDERpan). Jeff was raised by his mom who taught him how to cook and smoke crack at a young age, and while growing up he witnessed multiple shootings and even murders. By the time he was a teen his mom had him selling crack to keep his bed at home. Desperate to get away from his mother, Jeff joined a gang where he found acceptance, purpose, and a sense of belonging. He is now in prison on gun charges. When I talk to Jeff I find he is bright, respectful, and shy. He told me that since he has had some time AWAY from his crazy street life (yes, prison is SOMETIMES safer and more structured and can be seen as a break) he is now working on getting his GED and hopes to attend a trade school after his release.

"Tom" is an older man in his sixties and he is a sex-offender. His "mug" shot combined with the label "sex-offender" creates a strong stereotypical impression of what kind of person he is. Words like skinner and ripper are often used in reference to Tom. But if we take a closer look we can find the human behind the stereotype. Tom was born to poor and abusive parents. One day when he was five or six years old he fell out of the back seat of a car that was traveling on the highway. He suffered severe head injuries and as a result he is legally deaf and has an I.Q. score that places him as severely mentally retarded.

His parents eventually lost custody of Tom and he was put into foster homes where he was sexually abused for many years. He is currently in prison on a sexual offense charge. It doesn't take a genius to make the connections in his case.

Finally we come to Jay. Jay is serving a natural life sentence for a murder he did not commit due to what's known as "joint venture". While walking with a group of friends, one of Jay's friends saw someone he had a disagreement with. Jay's friend approached the guy and an altercation ensued. The group of friends watched as the altercation escalated into a fight and ended with the death of the man Jay's friend had a problem with. Jay was not involved in any way, but because he was present and did not report it he was charged with first degree murder under joint venture. All the friends were similarly charged. The actual murderer made a plea deal and ended up with a fifteen-life sentence for second degree murder. The others were offered the same deal, but knowing they did not participate in the murder they took their cases to trial. Each of them, including Jay, were found guilty of JOINT VENTURE first degree murder and will NEVER have the chance to get out of prison. By the way, Jay was a mere sixteen years old at the time of the crime. Not only was he not involved in the murder, he was a juvenile, yet the true murderer, who was an adult, has a parole date.

You may think such cases are rare, but these examples are TYPICAL. These are human beings with complex human situations. Now, am I advocating that they not be held responsible for their actions? Absolutely not. My point in citing these real-life examples is to emphasize the human element behind the stereotypes and headlines. If we can see past the Hollywood characterizations of inmates and criminals we can hold them responsible using much more effective means and do so without violating our values and ideals. This is NOT the case currently.

One more point to ponder. It's an odd fact that the most violent and unmanageable inmates are not the hardened Hollywood cons. The most volatile and dangerous inmates are those who struggle the most with mental health issues. One visit to a maximum security prison or to the segregation unit (the infamous "Hole") of any prison will reveal that a significantly high proportion of the residents have been diagnosed with mental illnesses and disorders. These men are struggling just to keep it together, to keep from "losing it" at any moment. A five minute conversation with most of these inmates will reveal SEVERELY arrested emotional development, high levels of stress, anxiety, and paranoia, and a lack of healthy coping skills. Rather than being the "toughest" inmates, THE RESIDENTS OF MAXIMUM SECURITY PRISONS AND SEGREGATION UNITS ARE OFTEN THE MOST FRAGILE, something Hollywood has yet to reflect in its portrayals of prison life.

The end result for law-abiding citizens concerned about community safety is this: As long as the general perception of people who commit crimes and who live in prisons is distorted by simplistic stereotypes our society will be unable to address its crime problem effectively. In order to effectively respond to ANY problem we need a CLEAR and ACCURATE understanding of that problem. Unfortunately, our understanding of prisons and the people who populate them is anything but clear and accurate. Due to this foggy perception we are unable to create laws and prisons that deal with the human element of crime. Worse than this, due to our stereotypical perception of inmates we tolerate the barbaric treatment, abuse, and neglect that is common in our prisons and criminal justice system tarnishing our claim to value human rights and progress.

THIS is the great Hollywood con of our times.

"Out of suffering have emerged the strongest souls; The most massive characters are seared with scars". Kahlil Gibran. Stay strong.

Karen
Amazing writing, very moving, it's a shame we are only fed lies by the media. It isn't as black and white as they want it to seem.
Really well written, makes us face up to the fact that the perpetrator-victim paradigm is often much more complex.
It is very true that nothing is neither black nor white. If only there was a way to help fix the wrongs that are being committed. But no matter where you are the world is a harsh and unforgiving place, and the only thing you really can do is stay strong and don't give up.

Stephanie
Thank you for this fantastic essay. Everyone should read this. Thank you. - Spider