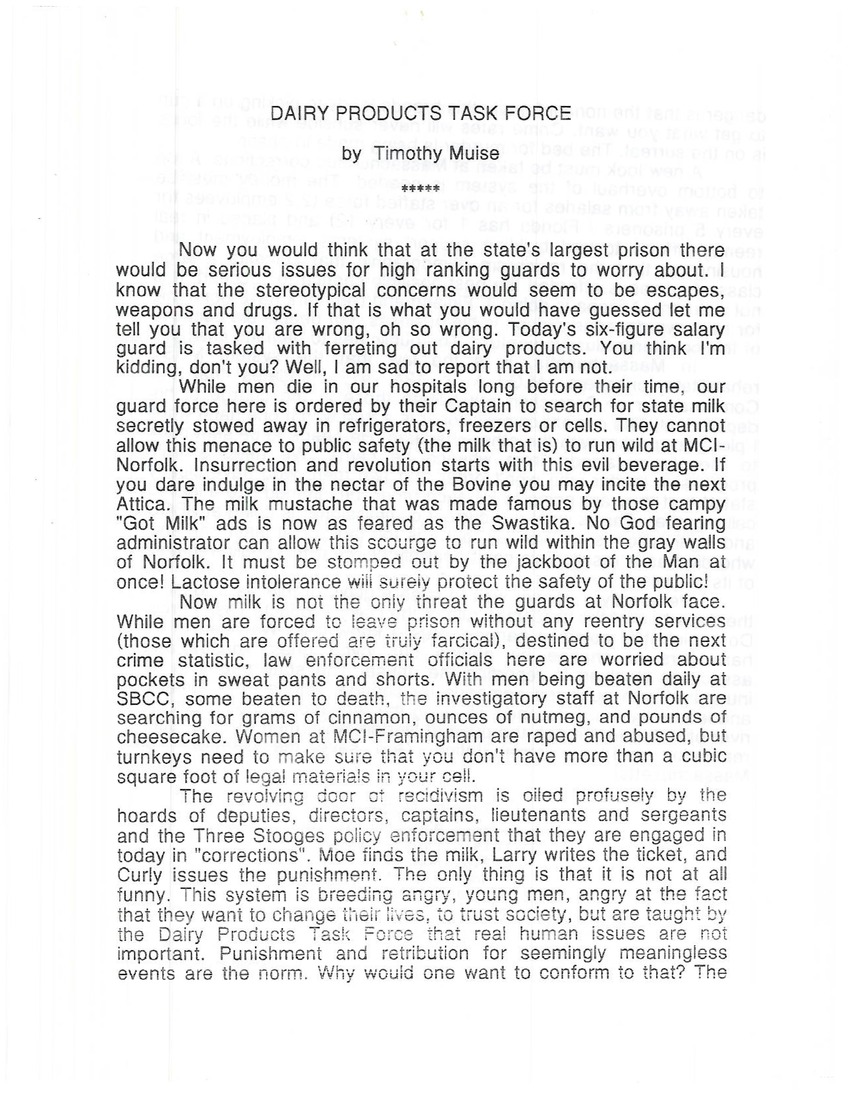 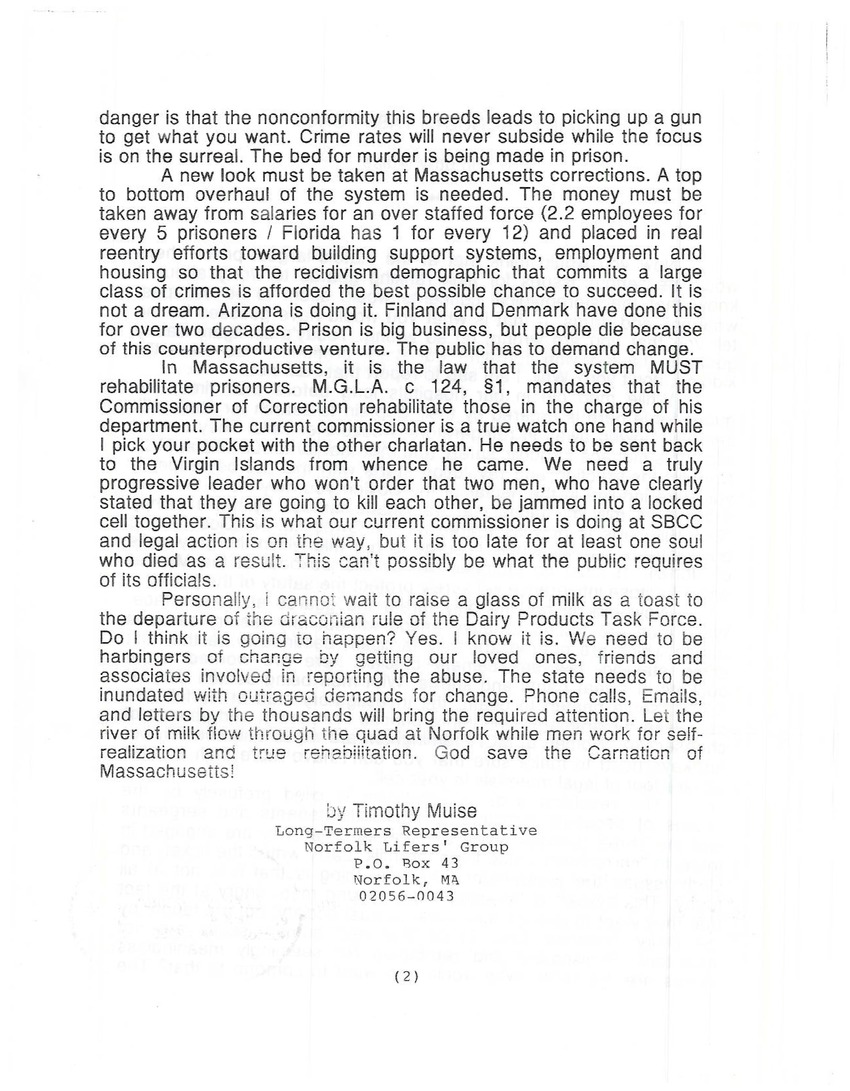 Now you would think that at the state's largest prison there would be serious issues for high ranking guards to worry about. I know that the stereotypical concerns would seem to be escapes, weapons and drugs. If that is what you would have guessed let me tell you that you are wrong, oh so wrong. Today's six-figure salary guard is tasked with ferreting out dairy products. You think I'm kidding, don't you? Well, I am sad to report that I am not.

While men die in our hospitals long before their time, our guard force here is ordered by their Captain to search for state milk secretly stowed away in refrigerators, freezers or cells. They cannot allow this menace to public safety (the milk that is) to run wild at MCI-Norfolk. Insurrection and revolution starts with this evil beverage. If you dare indulge in the nectar of the Bovine you may incite the next Attica. The milk mustache that was made famous by those campy "Got Milk" ads is now as feared as the Swastika. No God fearing administrator can allow this scourge to run wild within the gray walls of Norfolk. It must be stomped out by the jackboot of the Man at once! Lactose intolerance will surely protect the safety of the public!

Now milk is not the only threat the guards at Norfolk face. While men are forced to leave prison without any reentry services (those which are offered are truly farcical), destined to be the next crime statistic, law enforcement officials here are worried about pockets in sweat pants and shorts. With men being beaten daily at SBCC, some beaten to death, the investigatory staff at Norfolk are searching for grams of cinnamon, ounces of nutmeg, and pounds of cheesecake. Women at MCI-Framingham are raped and abused, but turnkeys need to make sure that you don't have more than a cubic square foot of legal materials in your cell.

The revolving door of recidivism is oiled profusely by the hoards of deputies, directors, captains, lieutenants and sergeants and the Three Stooges policy enforcement that they are engaged in today in "corrections". Moe finds the milk, Larry writes the ticket, and Curly issues the punishment. The only thing is that it is not at all funny. This system is breeding angry, young men, angry at the fact that they want to change their lives, to trust society, but are taught by the Dairy Products Task Force that real human issues are not important. Punishment and retribution for seemingly meaningless events are the norm. Why would one want to conform to that? The danger is that the nonconformity this breeds leads to picking up a gun to get what you want. Crime rates will never subside while the focus is on the surreal. The bed for murder is being made in prison.

A new look must be taken at Massachusetts corrections. A top to bottom overhaul of the system is needed. The money must be taken away from salaries for an over staffed force (2.2 employees for every 5 prisoners / Florida has 1 for every 12) and placed in real reentry efforts toward building support systems, employment and housing so that the recidivism demographic that commits a large class of crimes is afforded the best possible chance to succeed. It is not a dream. Arizona is doing it. Finland and Denmark have done this for over two decades. Prison is big business, but people die because of this counterproductive venture. The public has to demand change.

In Massachusetts, it is the law that the system MUST rehabilitate prisoners. M.G.L.A. c 124, (section) 1, mandates that the Commissioner of Correction rehabilitate those in the charge of his department. The current commissioner is a true watch one hand while I pick your pocket with the other charlatan. He needs to be sent back to the Virgin Islands from whence he came. We need a truly progressive leader who won't order that two men, who have clearly stated that they are going to kill each other, be jammed into a locked cell together. This is what our current commissioner is doing at SBCC and legal action is on the way, but it is too late for at least one soul who died as a result. This can't possibly be what the public requires of its officials.

Personally, I cannot wait to raise a glass of milk as a toast to the departure of the draconian rule of the Dairy Products Task Force. Do I think it is going to happen? Yes. I know it is. We need to be harbingers of change by getting our loved ones, friends and associates involved in reporting the abuse. The state needs to be inundated with outraged demands for change. Phone calls, Emails, and letters by the thousands will bring the required attention. Let the river of milk flow through the quad at Norfolk while men work for self-realization and true rehabilitation. God save the Carnation of Massachusetts!

It was enjoyable to read you wax poetic on the milk situation. Lactose intolerance and all.

I'm curious, though. Where does the milk come from? Is this zealousness on the part of the guards a by-the-letter adherence to some internal rule? Are the guards trying to save money, or avoid "waste" by being so strict?

To be honest, the post reads a little like your personal milk storage was over some limit, and this letter was a way to vent. Which is fine, if that's the case, it just wasn't explicitly stated.

As for the rest of your letter, cases of death by beating, and putting death-threat prisoners together in one cell is very disturbing. I don't live in the U.S., so there's not much I can do, except for this blog. But I agree that such incidents need to be documented by multiple witnesses and brought to light.