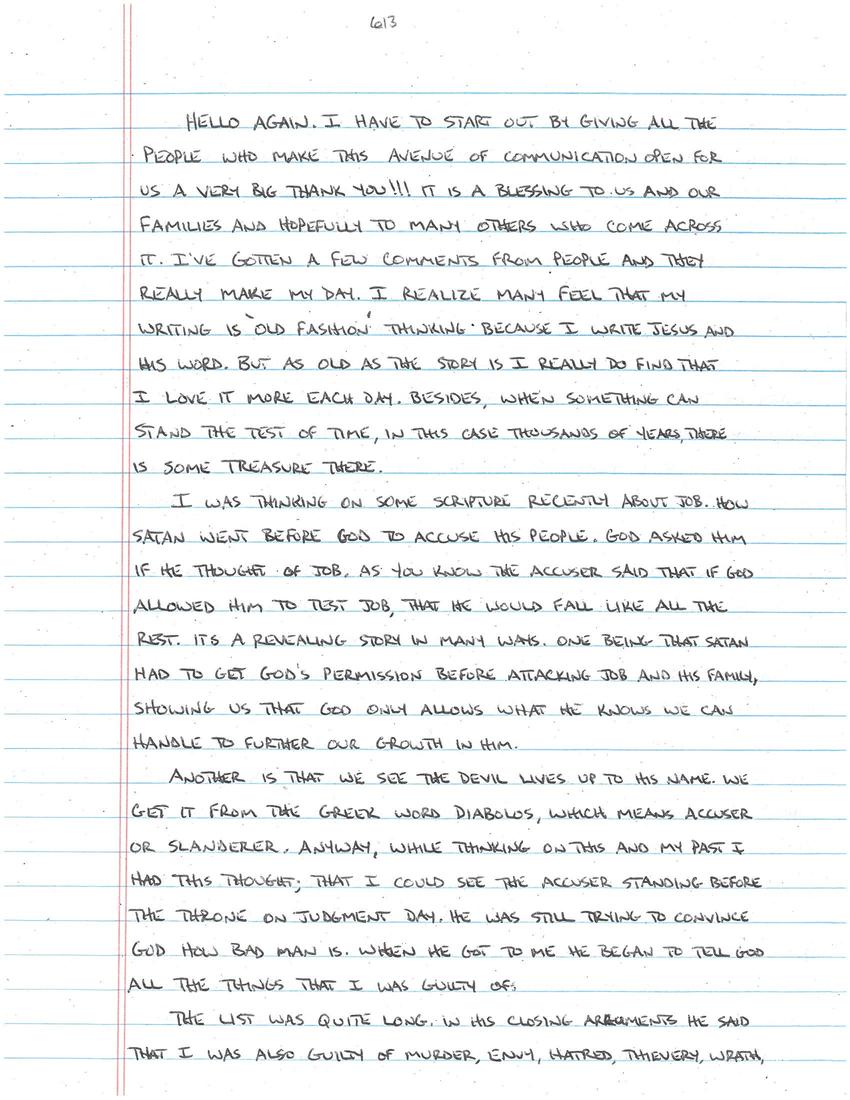 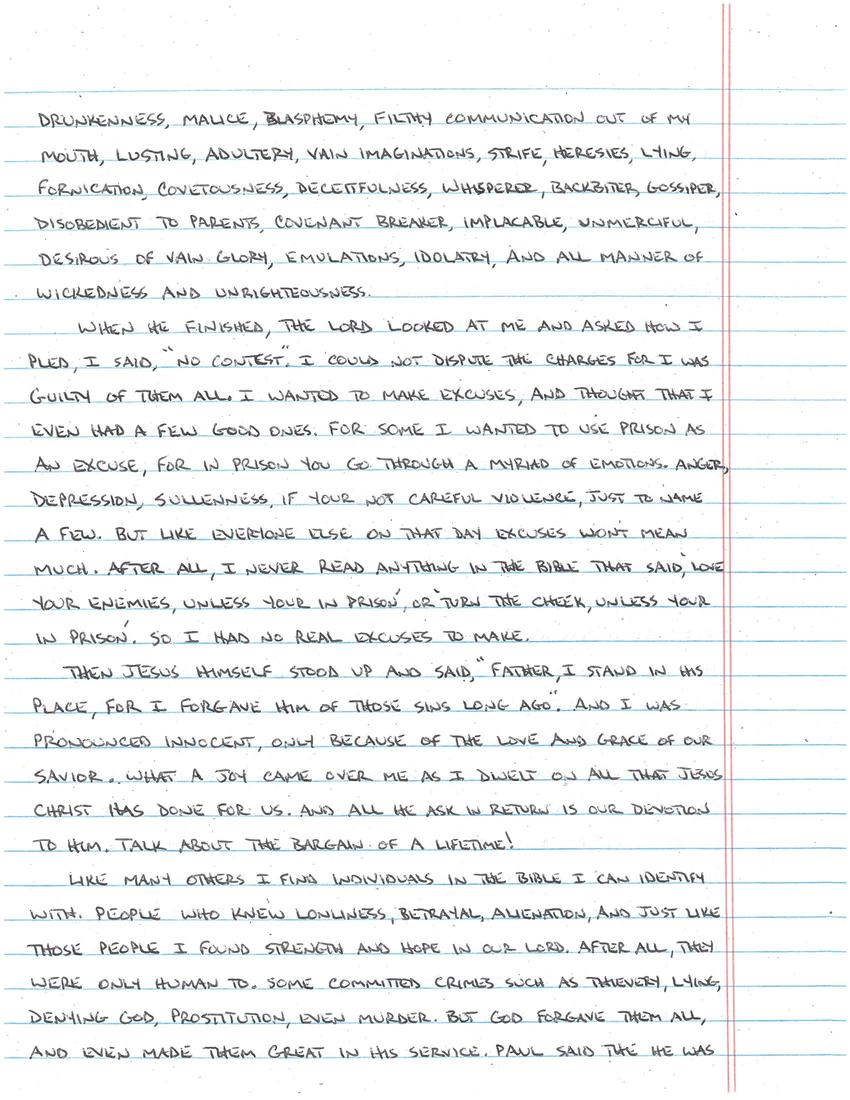 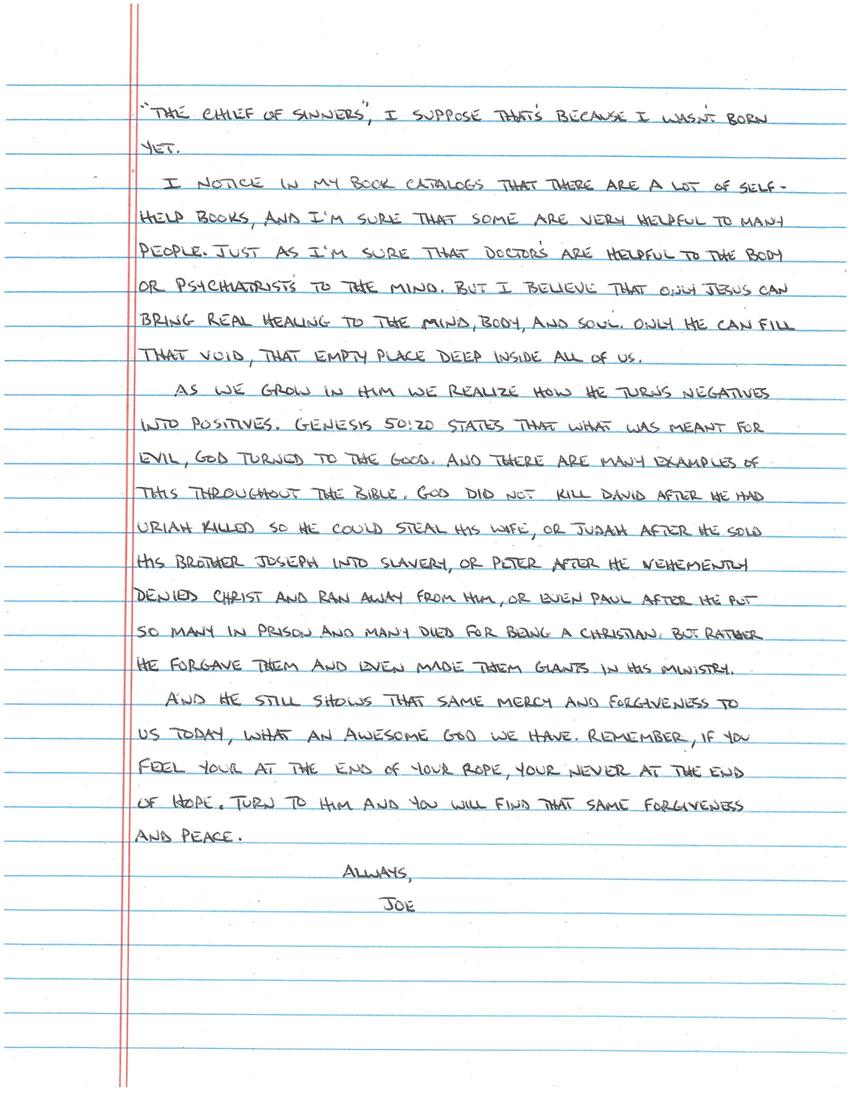 Hello Again. I have to start out by giving all the people who make this avenue of communication open for us a very big THANK YOU!!! It is a blessing to us and our families and hopefully to many others who come across it. I've gotten a few comments from people and they really make my day. I realize many feel that my writing is "old fashion" thinking because I write Jesus and his word. But as old as the story is I really do find that I love it more each day. Besides, when something can stand the test of time, in this case thousands of years, there is some treasure there.

I was thinking of some scripture recently about Job. How Satan went before God to accuse his people. God asked him if he thought of Job. As you know the accuser said that if God allowed him to test Job, that he would fall like all the rest. It's a revealing story in many ways. One being that Satan had to get God's permission before attacking Job and his family, showing us that God only allows what he knows we can handle to further our growth in Him.

Another is that we see the devil lives up to his name. We get it from the Greek word diabolos, which means accuser or slanderer, anyway, while thinking on this and my past I had this thought; that I could see the accuser standing before the throne on judgment day. He was still trying to convince God how bad man is. When he got to me he began to tell God all the things that I was guilty of.

When he finished, the Lord looked at me and asked how I plead, I said "No Contest". I could not dispute the charges for I was guilty of them all. I wanted to make excuses, and thought that I even had a few good ones. For some I wanted to use prison as an excuse, for in prison you go through a myriad of emotions. Anger, depression, sullenness, if your not careful violence, just to name a few. But like everyone else on that day excuses won't mean much. After all, I never read anything in the Bible that said, "Love your enemies, unless you are in prison", or "turn the cheek, unless you are I prison". So I had no real excuses to make.

Then Jesus himself stood up and said, "Father, I stand in his place, for I forgave him of those sins long ago". And I was pronounced innocent, only because of the love and grace of Our Savior. What a joy came over me as I dwelt on all that Jesus Christ had done for us. And all he ask in return is our devotion to Him. Talk about the bargain of a lifetime!

Lime many others I find individuals in the Bible I can identify with. People who knew loneliness, betrayal, alienation, and just like those people I found strength and hope in our Lord. After all, they were only human too. Some committed crimes such as thievery, lying, denying God, prostitution, even murder but God forgave them all, and even made them great in his service. Paul said that he was "the chief of sinners", I suppose that's because I wasn't born yet.

I notice in my book catalogs that there are a lot of self help books and I'm sure that some are very helpful to many people. Just as I'm sure that doctors are helpful to the body or psychiatrists to the mind. But I believe that on Jesus can bring real healing to the mind, body and soul. Only He can fill that void, that empty place deep inside all of us.

As we grown in Him we realize how he turns negatives into positives. Genesis 50:20 states that what was meant for evil, God turned to the good. And there are many examples of this throughout the Bible. God did not kill David after he had Uriah killed so he could steal his wife, or Judah after he sold his brother Joseph into slavery, or Peter after he vehemently denied Christ and ran away from him, or even Paul after he put so many in prison and many died for being Christian. But rather he forgave them and even made them giants in his ministry.

And he still shows that same mercy and forgiveness to us today, what an awesome God we have. Remember, if you feel you are at the end of your rope, you are never at the end of hope. Turn to Him and you will find that some forgiveness and peace.

First as Joe said we appreciate the opportunity to be able to read the blogs and to be able to reply to them it makes us feel closer to our love ones, thank you for making this publication possible.
Wow, Joe you never cease to amaze me with your writing sure wish I could put into words my thoughts the way you do. I think you are pretty smart not sure who you got it from. I am so proud of you Joe, I am looking forward to seeing what God has in store for you. He is going to use you in a mighty way. I love you and looking forward to your next writing.
love
mom
Joe you are a very gifted writer. Your insights and knowledge on the scripture is powerful. You have always had that gift but I suppose, the isolation of the life you have now allows even more focus. God bless you and keep you safe. I love you always. Shannon
Just today I commented, that I didn't have your address so I couldn't write you. Joyce found this awesome letter you wrote and Kevin put the address of betweenthebars so now I can write you. Keep the Faith I believe you are headed for heaven. I'm not in good health myself, but I'm trusting the Lord who can take care of body and soul. You must be an inspiration to your fellow inmates. I thoroughly enjoyed your letter. Love Grandma