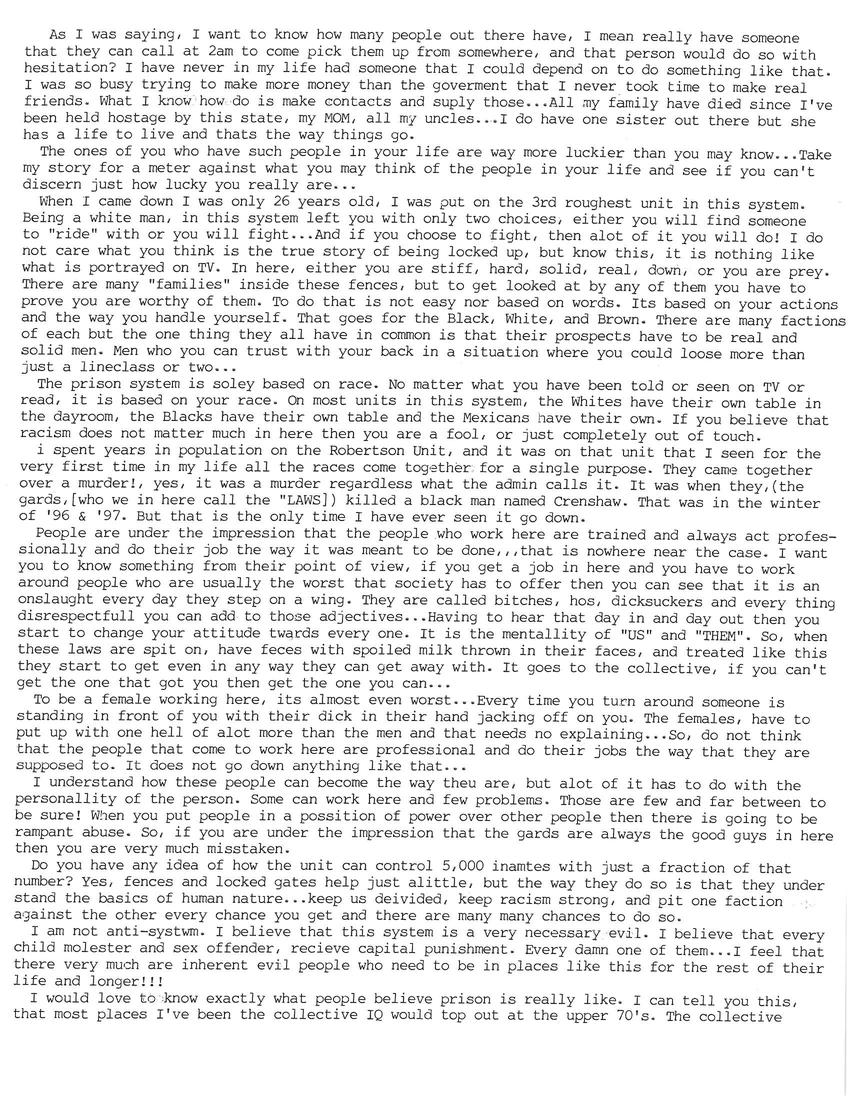 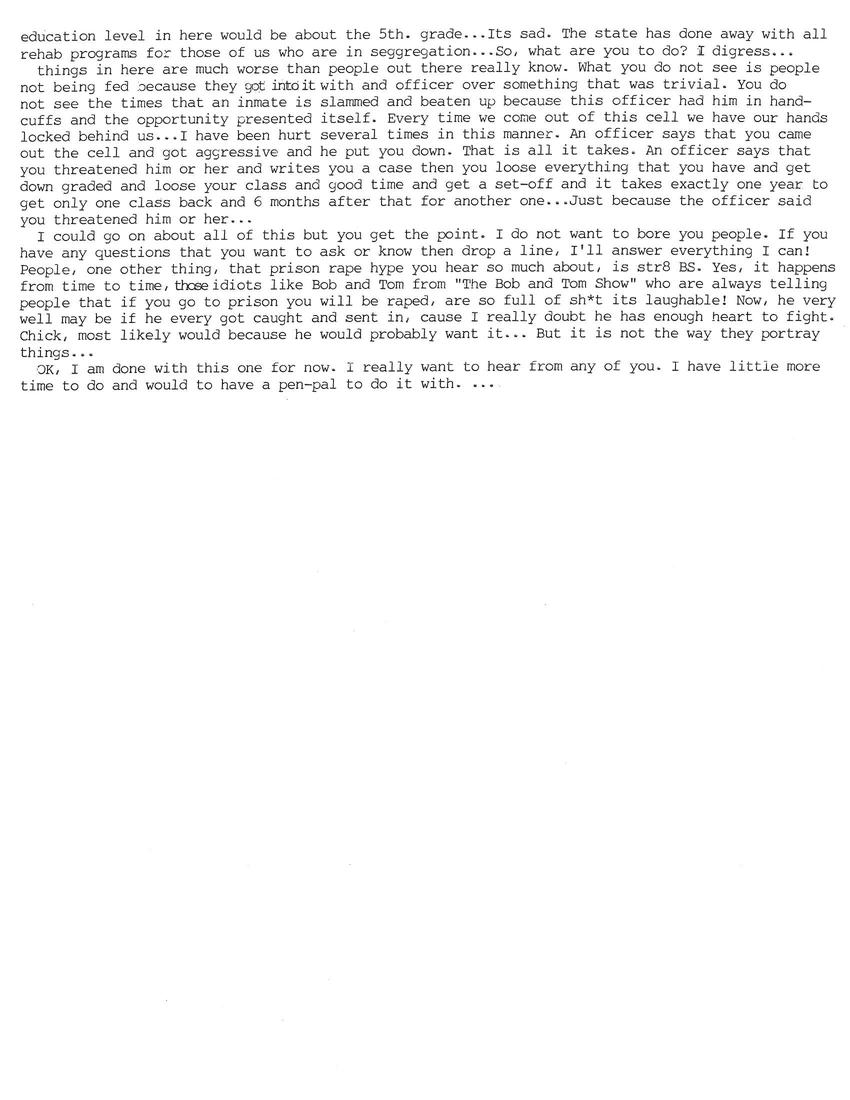 As I was saying, I want to know how many people are out there have—I mean, really have—someone that they can call at 2am to come pick them up from somewhere, and that person would do so without hesitation. I have never in my life had someone that I could depend on to do something like that.

I was so busy trying to make more money than the government that I never took time to make real friends. What I know how to make is contacts and supply those. All my family have died since I've been held hostage by this stake. My mom, my uncles... I do have one sister out there, but she has a life to live and that's the way things go.

When I came down, I was only 26 years old. I was put on the 3rd roughest unit in this system. Being a white man in this system left you with only two choices: either you will find someone to "ride" with or you will fight. And if you choose to fight, then a lot of it you will do!

I do not care what you think is the true story of being licked up, but know this: it is nothing like what is portrayed on TV. In here, either you are stiff, hard, solid, real, down, or you are prey. There are many "families" inside these fences, but to get looked at by any of them, you have to prove you are worthy of them. To do that is not easy nor based on words. It's based on your actions and the way you handle yourself. that goes for the black, white, and brown. There are many factions of each, but the one thing they all have in common is that their prospects have to be real and solid men. Men who you can trust with your back in a situation where you could lose more than just a lineclass or two.

The prison system is solely based on race. No matter what you have been told or seen on TV or read, it is based on your race. On most units in this system, the whites have their own table in the day room, the blacks have their own table, and the Mexicans have their own. If you believe that racism does not matter much in here, then you are a fool or just completely out of touch.

I spent years in population on the Robertson Unit, and it was on that unit that I seen for the very first time in my life all the races come together for a single purpose. They came together over a murder! Yes, it was murder, regardless of what the admin calls it. It was when they (the guards who we in here call the "LAWS") killed a black man named Crenshaw. That was in the winter of '96 and '97. But that is the only time I have ever seen it go down.

People are under the impression that the people who work here are trained and always act professionally and do their job the way it was meant to be done. That is nowhere near the case. I want you to know something from their point of view: if you get a job in here and you have to work around people who are usually the worst that society has to offer, then you can see that it is an onslaught every day they step on a wing. They are called bitches, hos, dicksuckers, and everything disrespectful you can add to those nouns.

Having to hear that day in and day out, then you start to change your attitude towards everyone. It is the mentally of "us" and "them". So, when these laws are spit on, have feces with spoiled milk thrown in their faces, and are treated like this, they start to get even in any way they can get away with. It goes to the collective. If you can't get the one that got you, then get the one you can.

To be a female worker here, it's almost even worse. Every time you turn around, someone is standing in front of you with their dick in their hand, jacking off on you. The females have to put up with hell of a lot more than the men, and that needs no explaining. So do not think that the people who come to work here are professional and do their jobs the way that they are supposed to. It does not go down anything like that.

I understand how these people can become the way they are, but a lot of it has to do with the personality of the person. Some can work here and have few problems. Those are few and far between to be sure! When you put people in a position of power over other people, then there is going to be rampant abuse. So if you are under the impression that the guards are always the good guys in here, then you are very much mistaken.

Do you have any idea of how the unit can control 5,000 inmates with just a fraction of that number? Yes, fences and locked gates help just a little. But the way they do so is that they understand the basics of human nature: keep us divided, keep racism strong, and pit one faction against the other every chance you get. And there are many, many chances to do so.

I am not anti-system. I believe that this system is a very necessary evil. I believe that every child molester and sex offender receive capital punishment. Every damn one of them. I feel that there are very much inherent evil people who need to be in places like this for the rest of their lives and longer!

I would love to know exactly what people believe prison is really like. I can tell you this: most places that I've been, the collective IQ would top out at the upper 70s. The collective education level in here would be about the 5th grade. It's sad. The state has done away with all rehab programs for those of us who in segregation. So what are you to do? I digress.

Things in here are much worse than people out there really know. What you not see is people not being fed because they got into it with an officer over something that was trivial. You do not see the times that an inmate is slammed and beaten up because this officer who had him in handcuffs and the opportunity presented itself.

Every time we come out of this cell, we have our hands locked behind us. I have been hurt several times in this manner. An officer says that you threatened him or her; writes you a case; then you lose everything that you have and get downgraded; lose your class and good time; and get a set-off. And it takes exactly one year to get only one class back and 6 months after that for another one. Just because the officer said you threatened him or her.

I could go on about all of this, but you get the point. I do not want to bore you people. If you have any questions that you want to ask or know, then drop a line. I'll answer everything I can!

People, one other thing: that prison rape hype you hear so much about is straight BS. Yes, it happens from time to time. Those idiots like Bob and Tom from the "The Bob and Tom Show" who are always telling people that if you go to prison, you will be raped, are so full of shit it's laughable! Now, he very well may be, if he ever got caught and sent it, 'cause I really doubt he has enough heart to fight. Chick, most likely would because he would probably want it. But it is no the way they portray things.

Okay, I am done with this for now. I really want to hear from any of you. I have little more time to do and would want to have a pen-pal to do it with.

Hi William! My name is Alyssa :) I really liked your blog post you did in 2011. I thought it was really eye opening. It was really interesting to see your perspective on prison guards and how bad they treat people in prison. I am sorry that has happened to you. I also found the prison gangs information interesting. I would love to see some more writing from you. I hope you are doing okay and I hope you write back soon.

Ps. I would love for you to send a picture of yourself to between the bars also;)
(scanned reply – view as blog post)
uploaded Feb. 6, 2017.  Original (PDF) 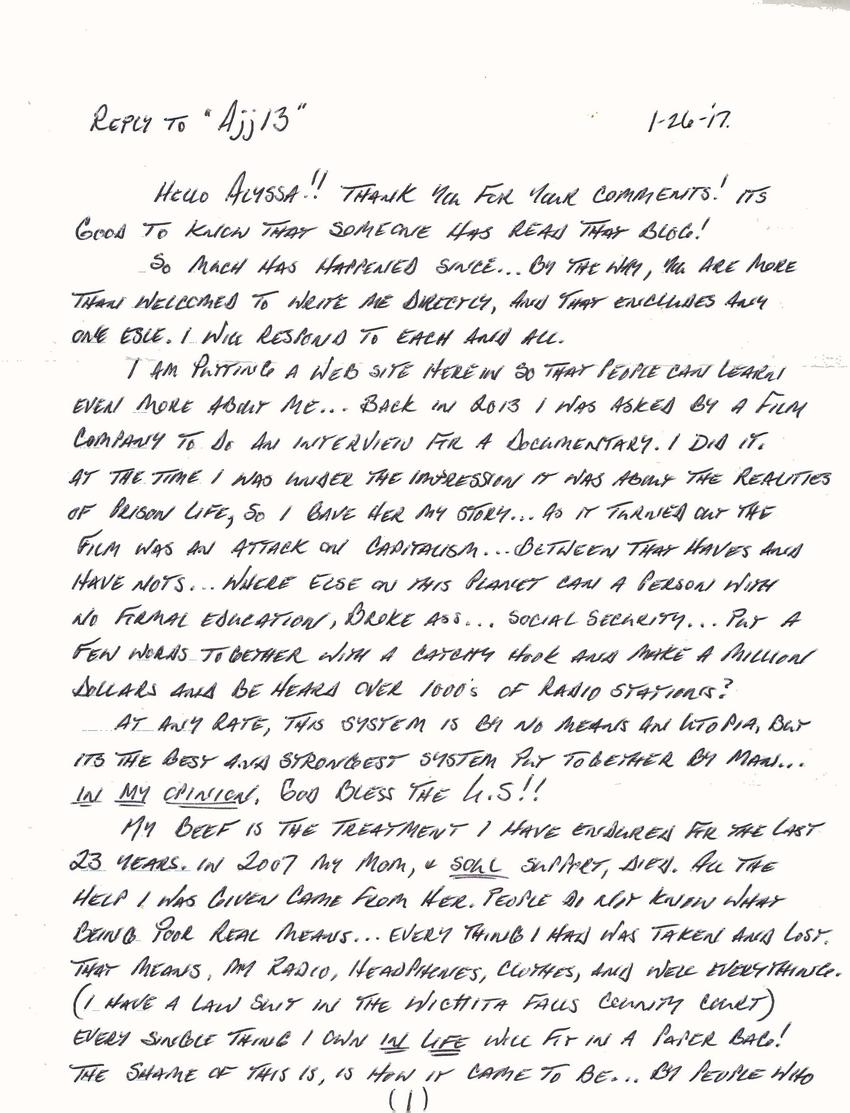 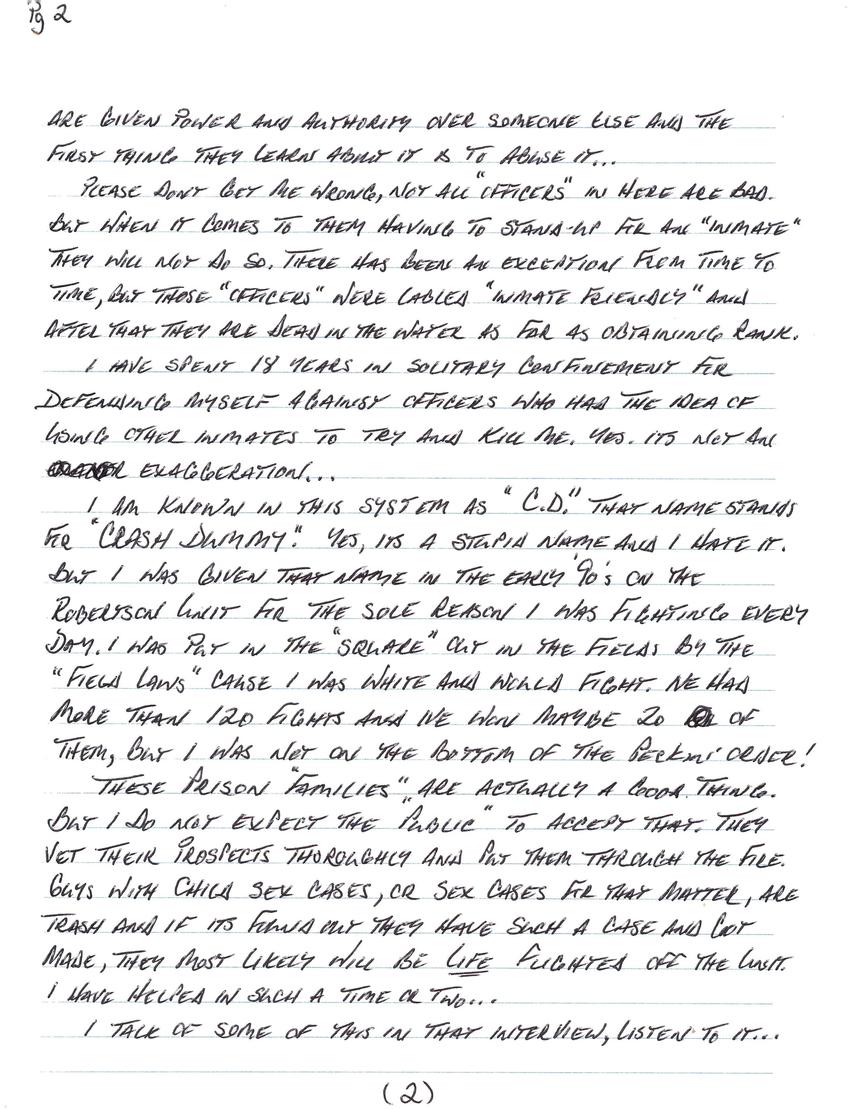 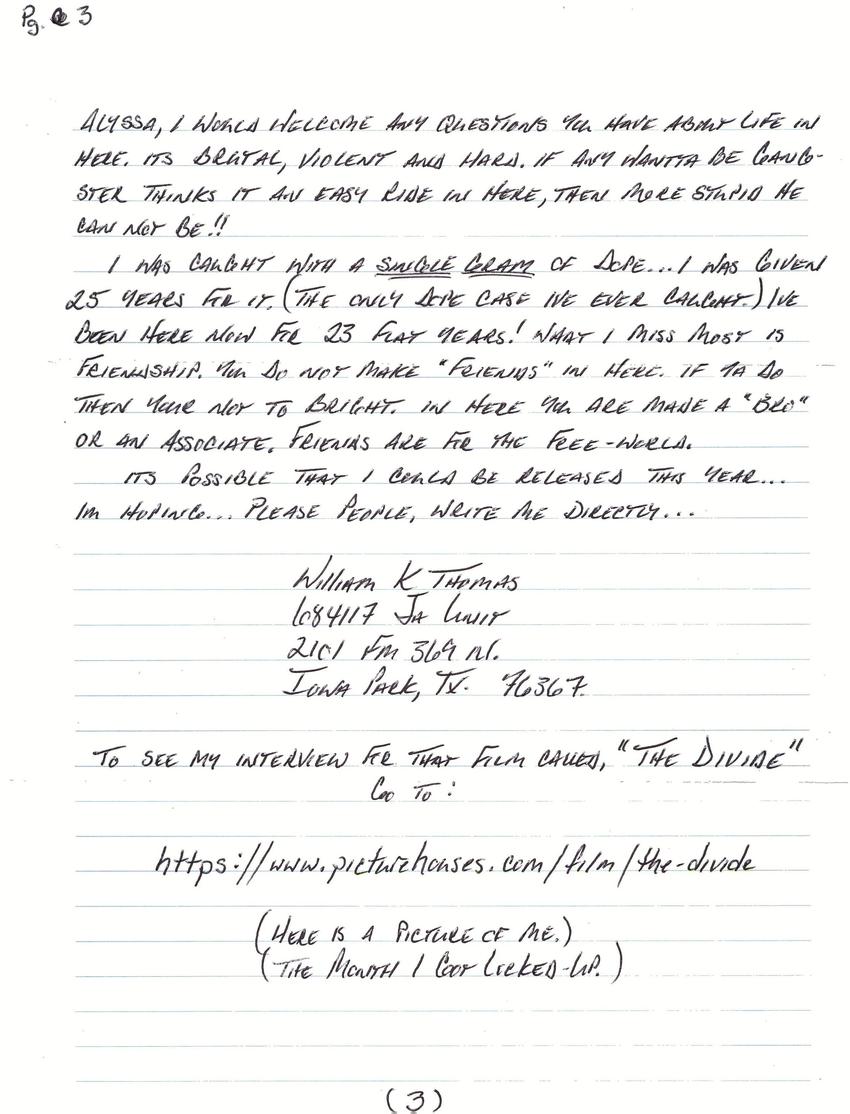 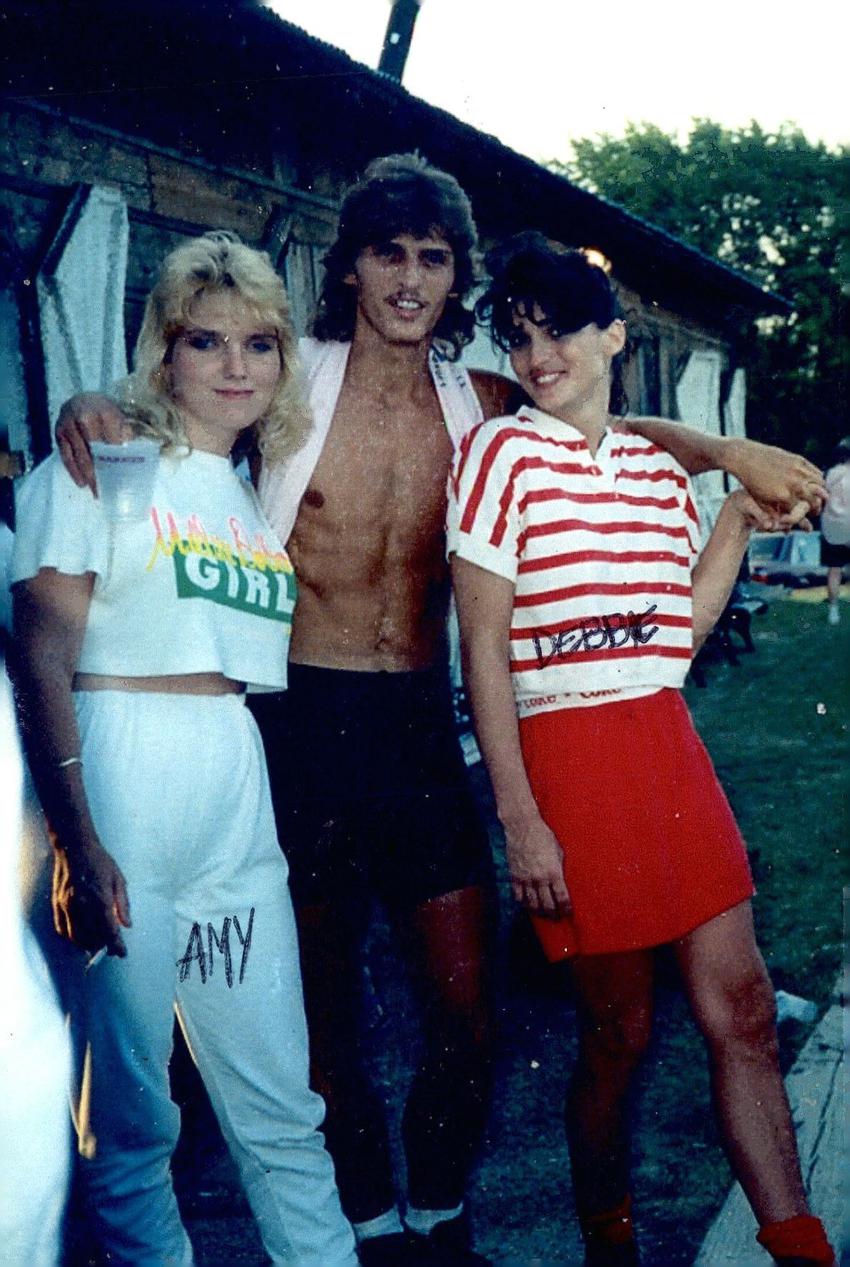 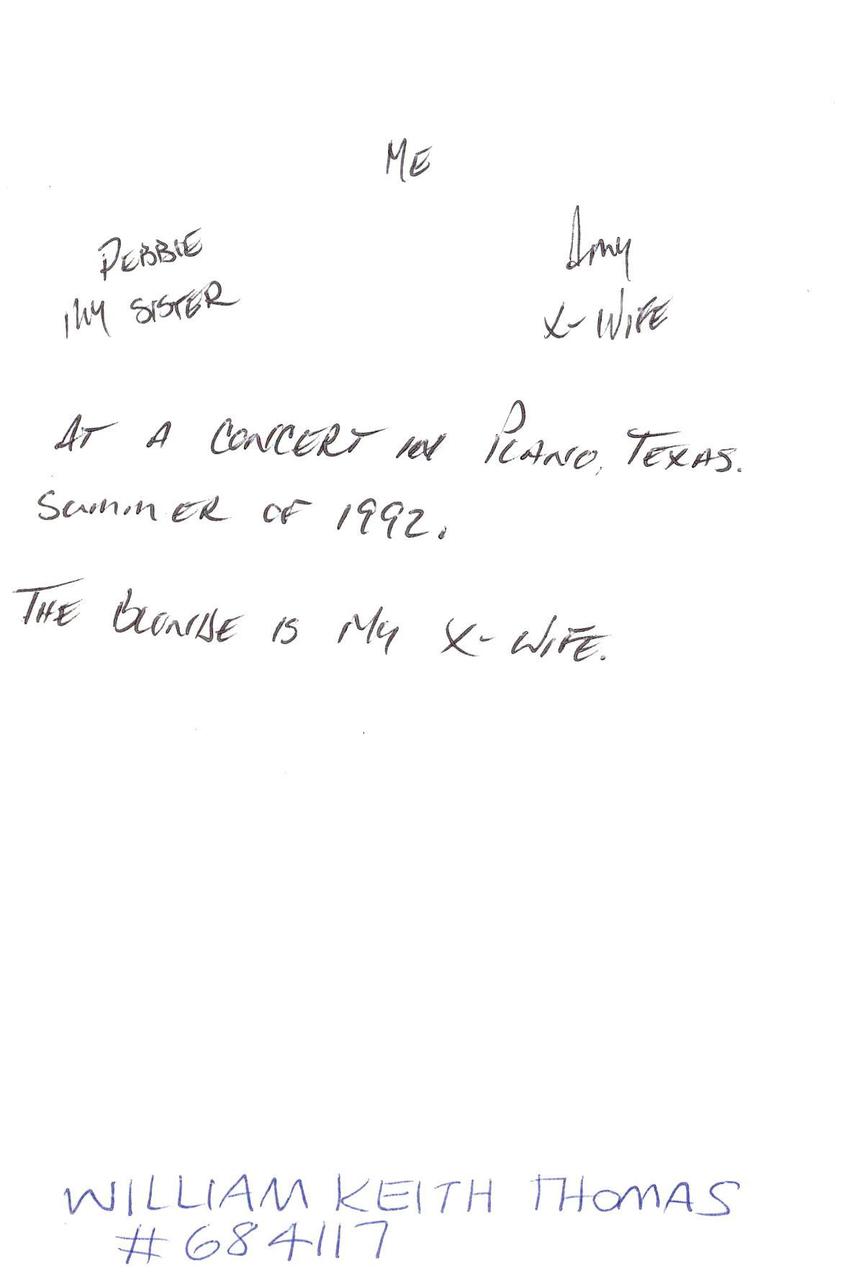 Hi Keith! Thank you for the reply. I loved your letter. It is SO cool that you are in that documentary. Im going to have to watch it. It was interesting to read your stories in your reply also. I was also wondering if you would be able to help me with something. I am asking a few people on the betweenthebars.org some questions for a research project and was wondering if you would answer them if you felt like it. Here are the questions: What are ways that men deal with missing women in prison? Do you think men change not being around women? If so in what ways? How do you think this affects them when they are released? How do men deal with their "needs"? Do you think solitary confinement changes any of this or plays into this topic? Do you think men become more reserved or dont know how to deal with a womens "touch" when released from prison? ;) I just want to hear your input on this out of curiosity. Speak your mind. I would love to maybe see a blog post about this too. Thank you. Hope to hear back soon :)