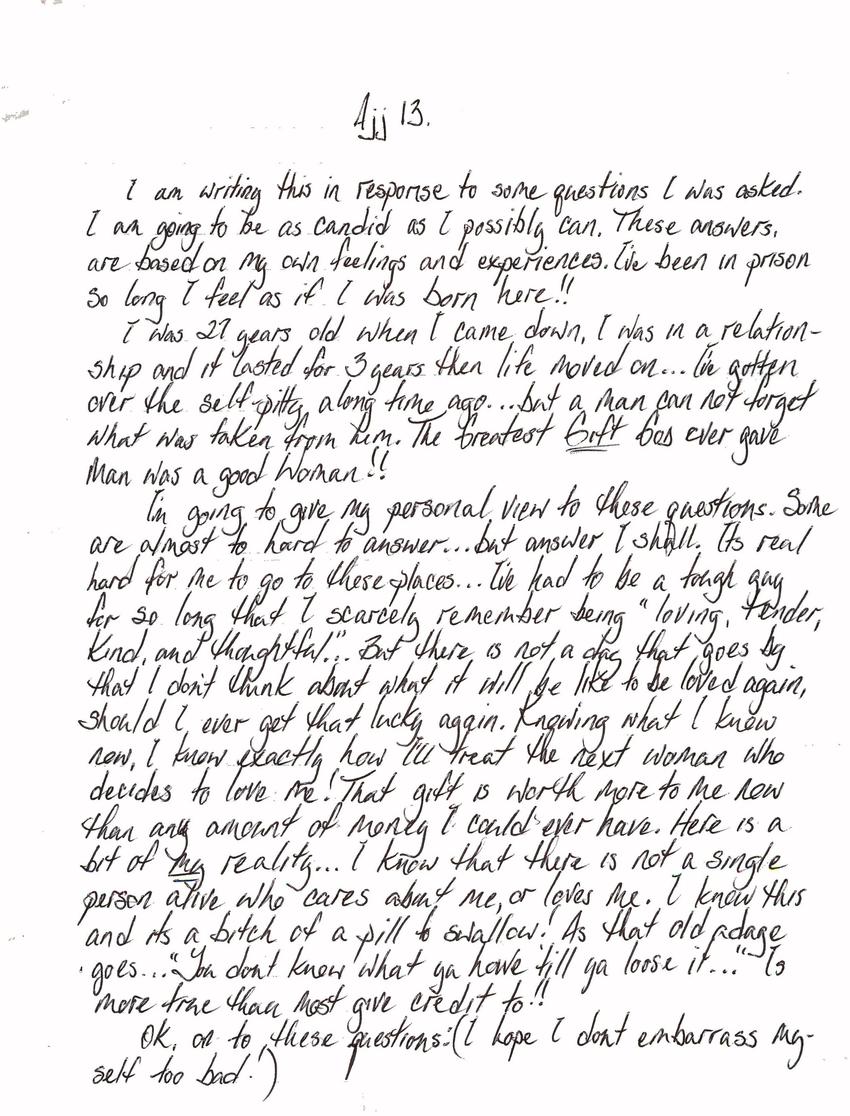 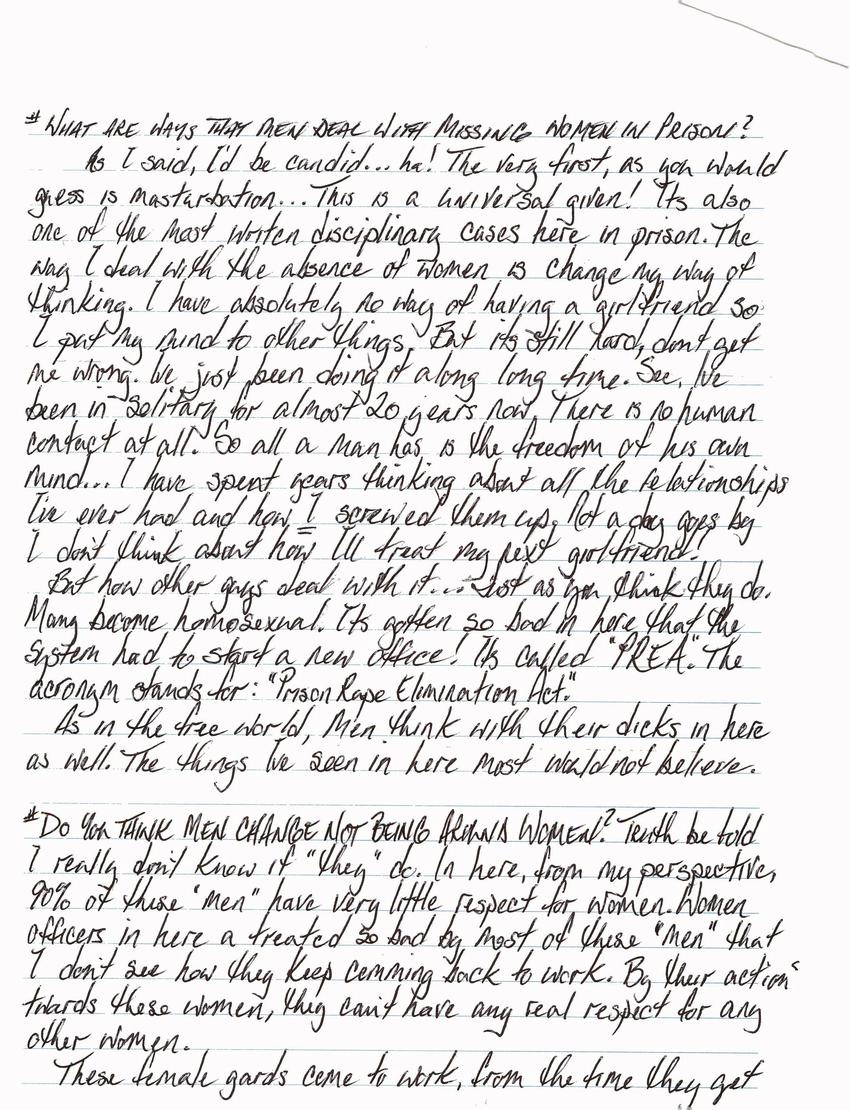 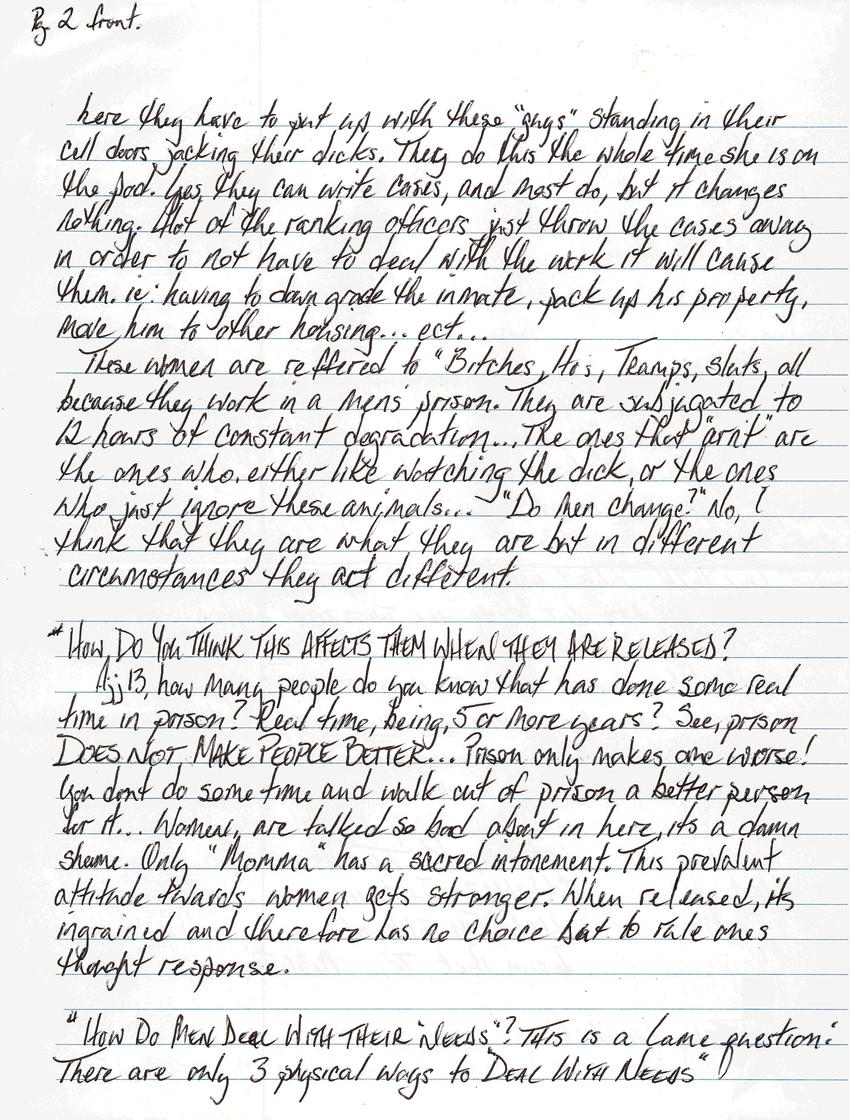 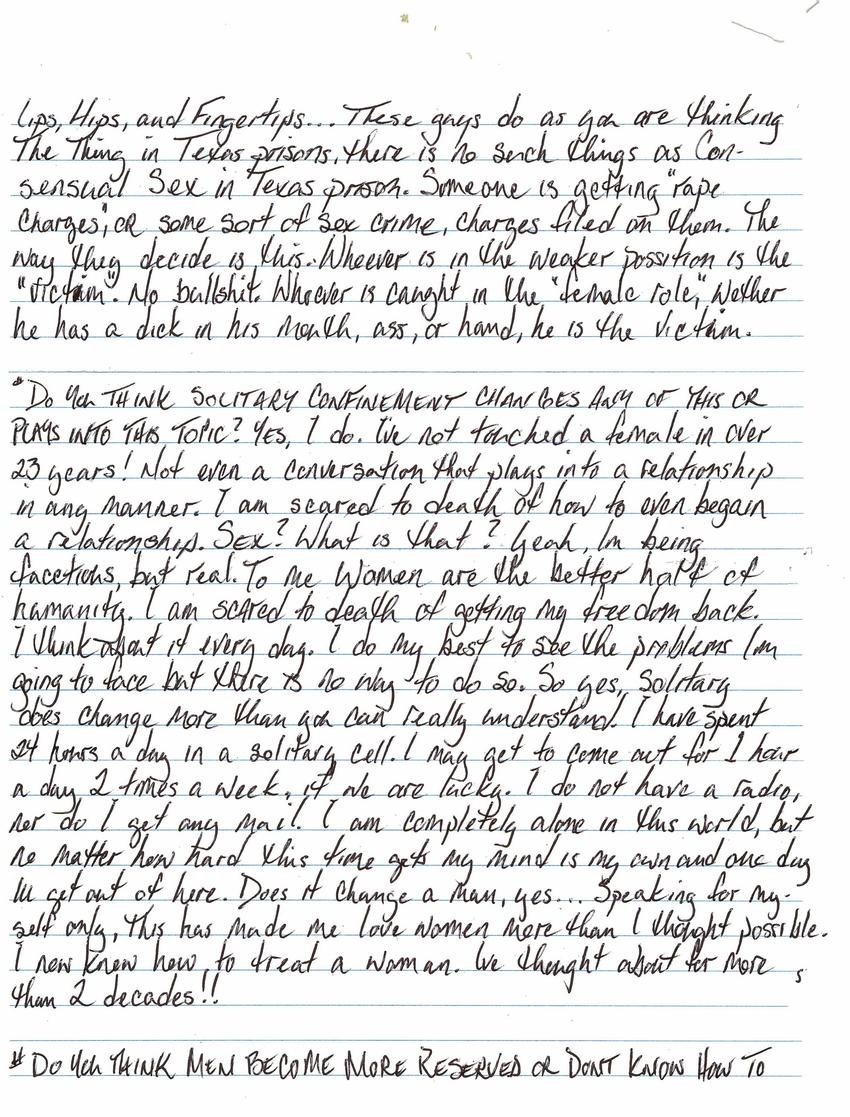 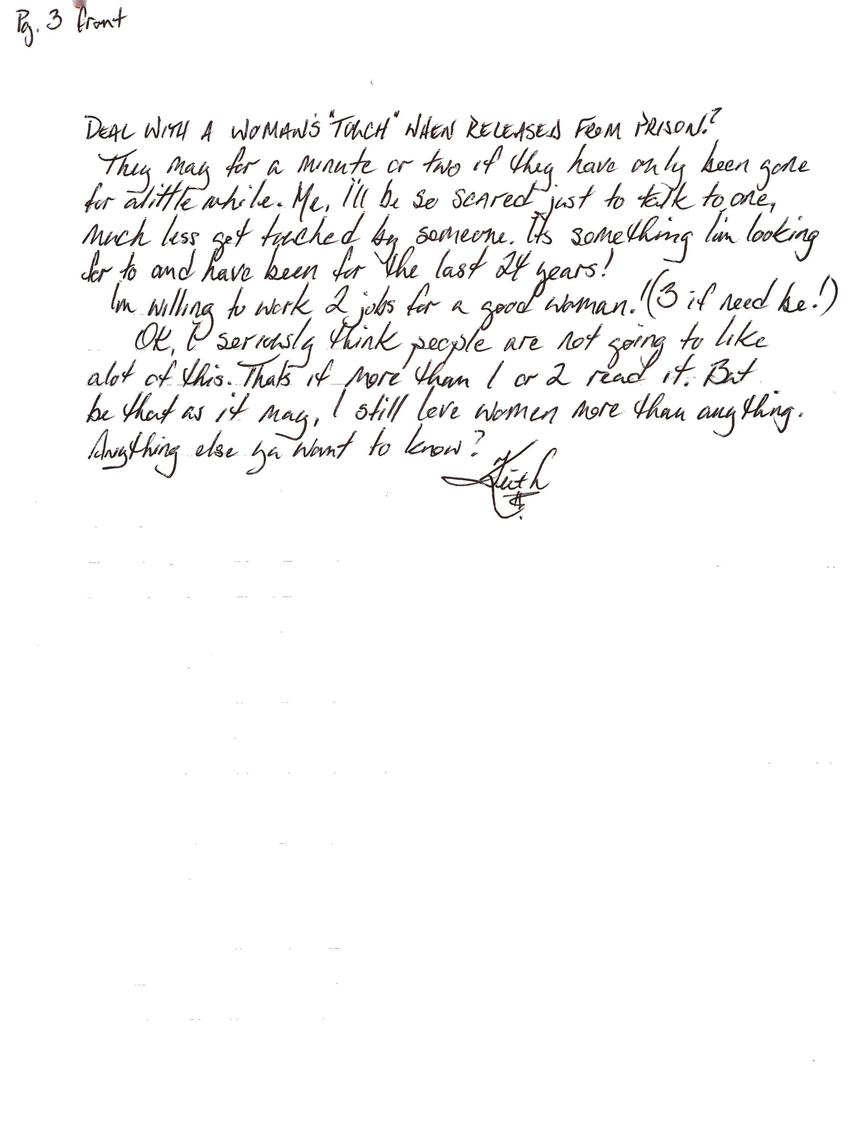 I am writing this in response to some questions I was asked. I am going to be as candid as I possibly can. These answers are based on my own feelings and experiences. I've been in prison for so long I feel as if I was born here!

I was 27 years old when I came down. I was in a relationship and it lasted for three years, then life moved on. I've gotten over the self-pity a long time ago, but a man cannot forget what was taken from him. The greatest gift God ever gave man was a good woman!

I'm going to give my personal view to these questions. Some are almost too hard to answer, but answer I shall. It's real hard for me to go to these places. I've had to be a tough guy for so long that I scarcely remember being "loving, tender, kind, and thoughtful." But there is not a day that goes by that I don't think about what it will be like to be loved again, should I ever get that lucky again. Knowing what I know now, I know exactly how I'll treat the next woman who decides to love me! That gift is worth more to me now than any amount of money I could ever have.

Here is a bit of my reality: I know that there is not a single person alive who cares about me or loves me. I know this, and it's a bitch of a pill to swallow. As that old adage goes, "You don't know what you have till you lose it." It's more true than most give it credit!

Okay, onto the questions. I hope I don't embarrass myself too bad.

#What are ways that men deal with missing women in prison?
As I said, I'd be candid. Ha!

The very first, as you would guess, is masturbation. This is an universal given! It's also one of the most written disciplinary cases here in prison. The way I deal with the absence of a woman is to change my way of thinking. I have absolutely no way of having a girlfriend, so I put my mind to other things. But it's still hard, don't get me wrong. I've just been doing it a long, long time. See, I've been in solitary for almost twenty years now. There is no human contact at all. So all a man has is the freedom of his own mind. I have spent years thinking about all the relationships I've ever had and now I screwed them up. Not a day goes by when I don't think about how I'll treat my next girlfriend!

But how do other guys deal with it? Just as you think they do: many become homosexuals! It's gotten so bad in here that the system had to start a new office! It's called PREA: Prison Rape Elimination Act.

As in the free world, men think with their dicks in here. The things I've seen in here most would not believe.

#Do you think men change not being around women?
Truth be told, I really don't know if they do. In here, from my perspective, 90% of these "men" have very little respect for women. Women officers in here are treated so bad by most of these "men" that I don't see how they keep coming back to work. By their actions towards these women, they can't have any real respect for any other women.

These female guards come to work. From the time they get here, they have to put up with these "guys" standing in their cell doors jacking their dicks. They do this the whole time she is on the pod. Yes, they can write cases and most do, but it changes nothing. A lot of the ranking officers just throw the cases away in order to not have to deal with the work it will cause them (i.e. having to downgrade the inmate, pack up his property, move him to other housing, etc.).

The women are referred to as bitches, hos, tramps, sluts—all because they work in a men's prison. They are subjugated to 12 hours of constant degradation. The ones that aren't are the ones who either like watching the dick or the ones who just ignore these animals. Do men change? No, I think they are what they are, but, in different circumstances, they are different.

#how do you think this affects them when they are released?
Ajj13, how many people do you know that has done some real time in prison? Real time being five or more years? See, prison does NOT make people better. Prison only makes one worse! You don't do some time and walk out of prison a better person for it.

Women are talked so bad about in here, it's a damn shame. Only "Momma" has a sacred enthronement. This prevalent attitude towards women gets stronger. When released, it's ingrained and therefore has no choice but to rule one's though response.

#How do men deal with their needs?
This is a lame question. There are only three physical ways to deal with "needs": lips, hips, and fingertips. These guys do as you are thinking.

The thing in Texas prisons is there is no such thing as consensual sex in Texas prison. Someone is getting rape charges or some sort of sex crime charges filed on them. The way they decide is this: whoever is in the weaker position is the "victim." No bullshit. Whoever is caught in the "female role," whether he has a dick in his mouth, ass, or hand, he is the victim.

#Do you think solitary confinement changes any of this or plays into this topic?
Yes, I do. I've not touched a female in over twenty years! Not even a conversation that plays into a relationship in any manner.

I am scared to death of how to even begin a relationship. Sex? What is that? Yeah, I"m being facetious, but real. To me, women are the better half of humanity. I am scared to death of getting my freedom back. I think about it every day. I do my best to see the problems I'm going to face, but there is no way to do so.

So, yes, solitary does change more than you can really understand. I have spent 24 hours a day in a solitary cell. I may get to come out for one hour a day, two times a week. If we are lucky. I do not have a radio nor do I get any mail. I am completely alone in this world, but no matter hard this time gets, my mind is my own and one day I'll get out of here. Does it change a man? Yes. Speaking for myself only, this has made me love women more than I thought possible. I now know how to treat a woman. I've thought about it for more than two decades!

#Do you think men become more reserved or don't know how to deal with a women's touch when released from prison?
They may for a minute or two, if they have only been gone for a little while. Me? I'll be so scared just to talk to one, much less get touched by someone. It's something I'm looking for and have been for the last twenty-four years!

I'm willing to work two jobs for a good woman, three if need be!

Okay, I seriously think people are not going to like a lot of this. That's if more than one or two read it. But, be that as it may, I still love women more than anything.

Anything else you want to know?

Hi Keith! Thank you so much for your response it was so thorough. Just to let you know I asked these questions for a psychology class that I am taking in college. I am doing research on human interactions and how a lack of intimate contact can change a persons personality and outlook on life. I am specifically looking at correction systems. I asked men and women about how they deal with the lack of contact with each other and I have found similar results in some instances and very different results in others. It seems that masturbation is a similar thing that men and women both use as a coping mechanism to deal with the lack of contact in prison. ( Dont blame anyone for that. lol. Got to have some kind of fun in prison I bet. I know I would ;) ) Some people said that masturbation was okay in their prison while others said they would get in big trouble for it. What is the case with you? Also most men responded with saying they have a stronger appreciation of women than before they were in prison. Women seem to just miss the interaction in general with men. Keith I appreciate you responding and I really do enjoy all of your blog posts. I will keep reading and feel free to comment back on this and maybe we can keep this conversation going or whatever you would like to talk about. I am doing research and my paper wont be due until the end of the semester so I could alway use more inspiration on what to look up and dive deeper into this topic. It was interesting to see your perspective. I can ask a few more questions to you if you want to respond or not it is up to you. We could also just talk about life on here if you would like that also. If you would like to write about solitary confinement and what you think about that I would really like to see your opinions and feelings about it. I recently watched a live video stream online of a man from the news network vice who put himself in solitary confinement for 30 days and cameras were on him 24-7. You could go on YouTube and watch him at anytime. It was really interesting and sad to see the effects of the expirement. I'm sorry that you have been going through that for 20 years. Like I said feel free to write about whatever you wanted to me. Thank you again your friend Alyssa :)
(scanned reply – view as blog post)
uploaded April 13, 2017.  Original (PDF) 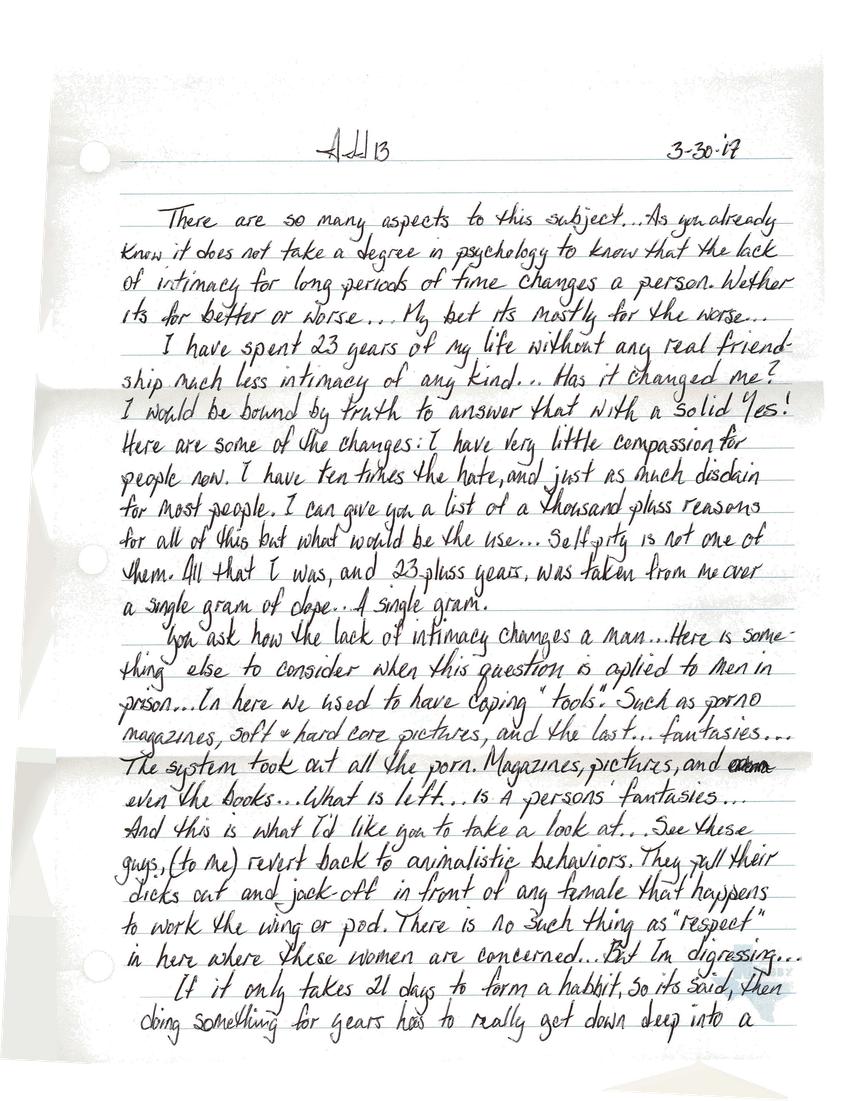 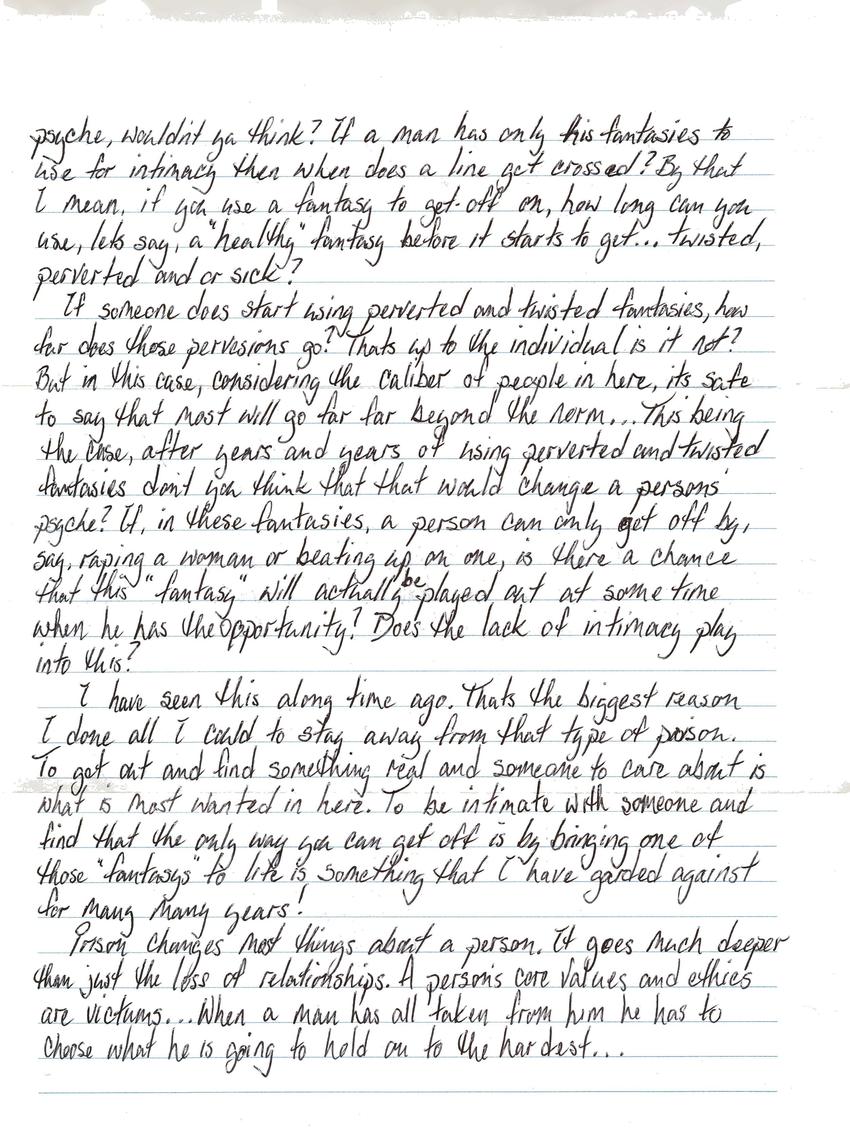 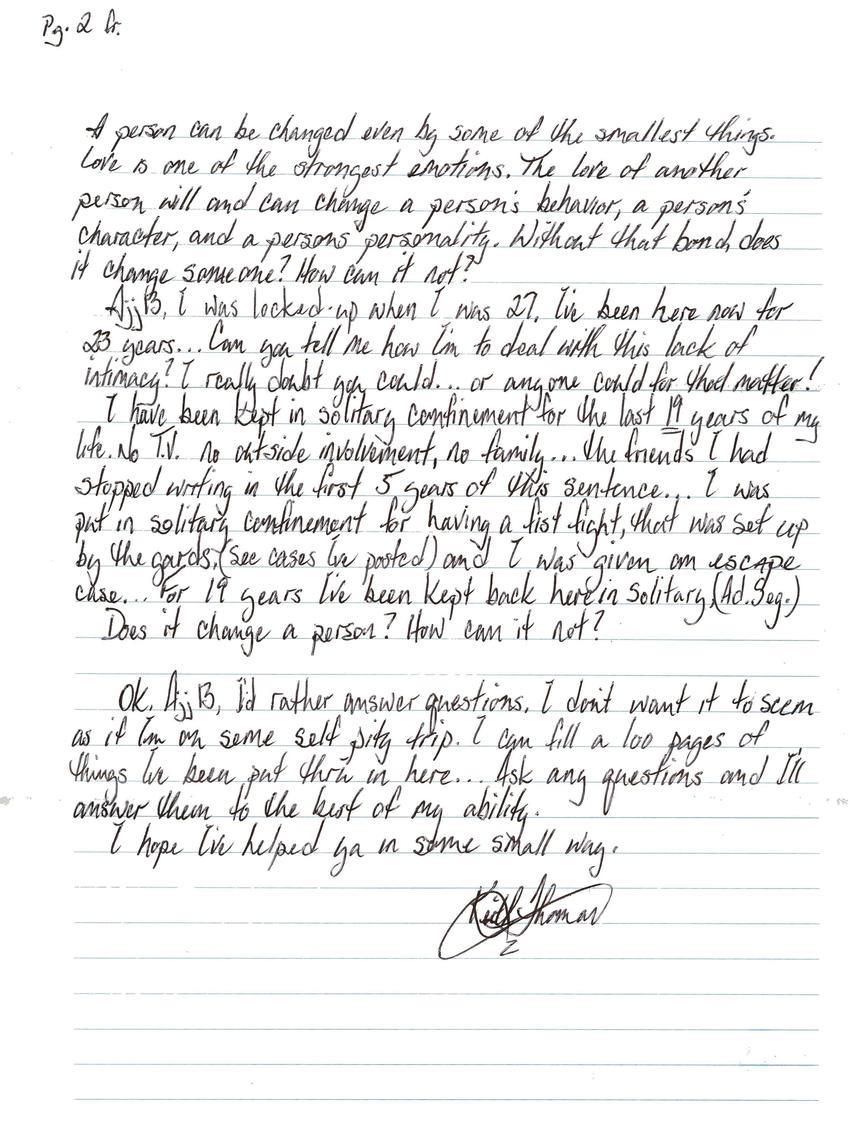