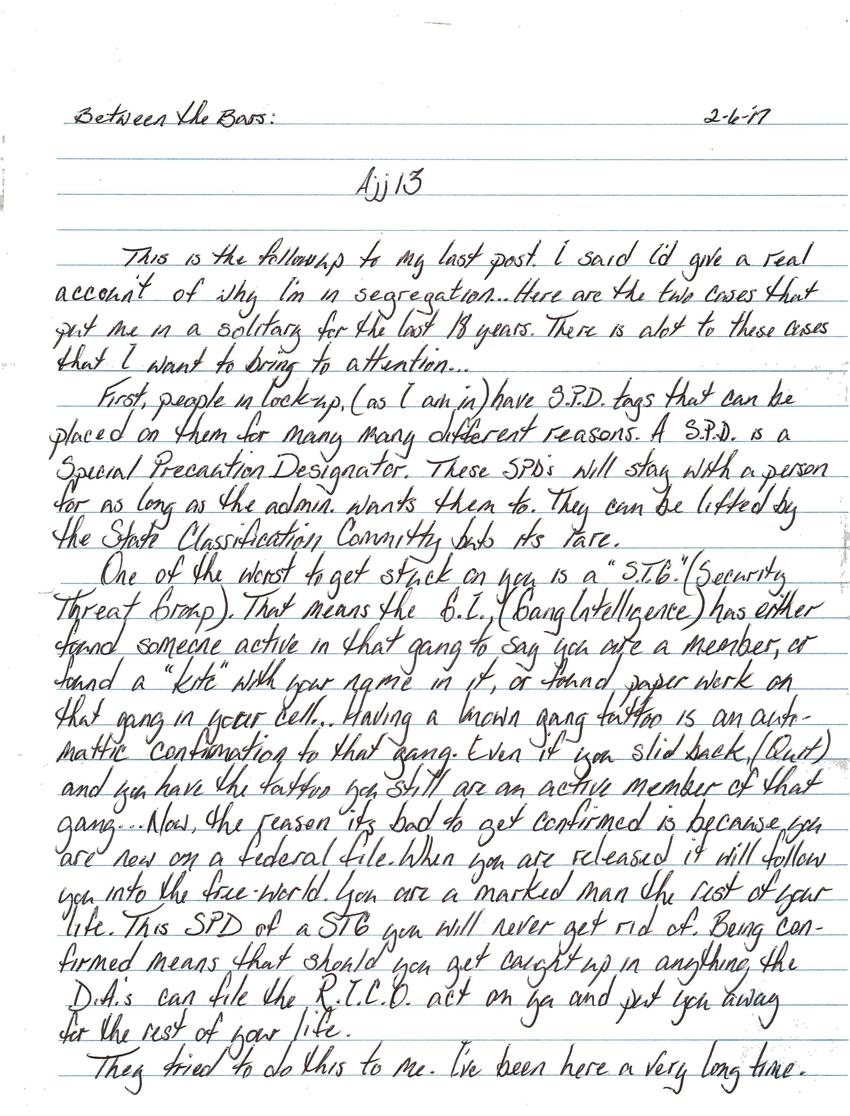 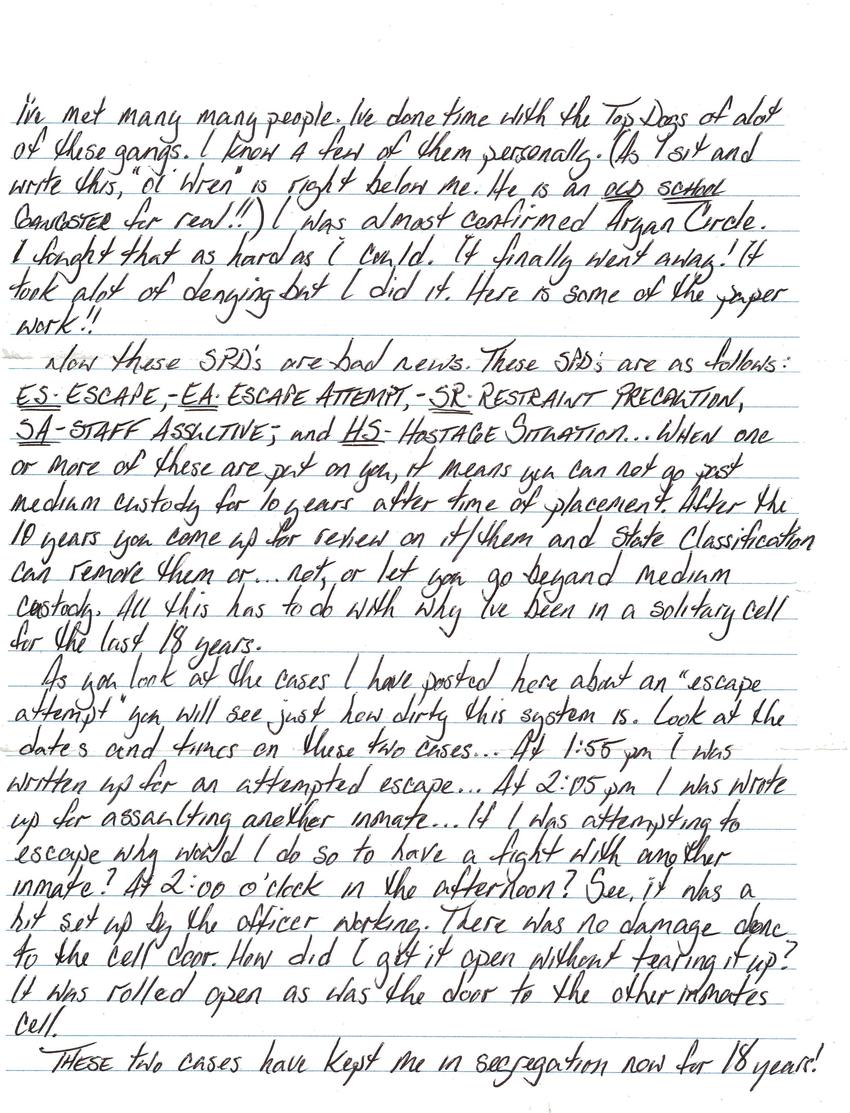 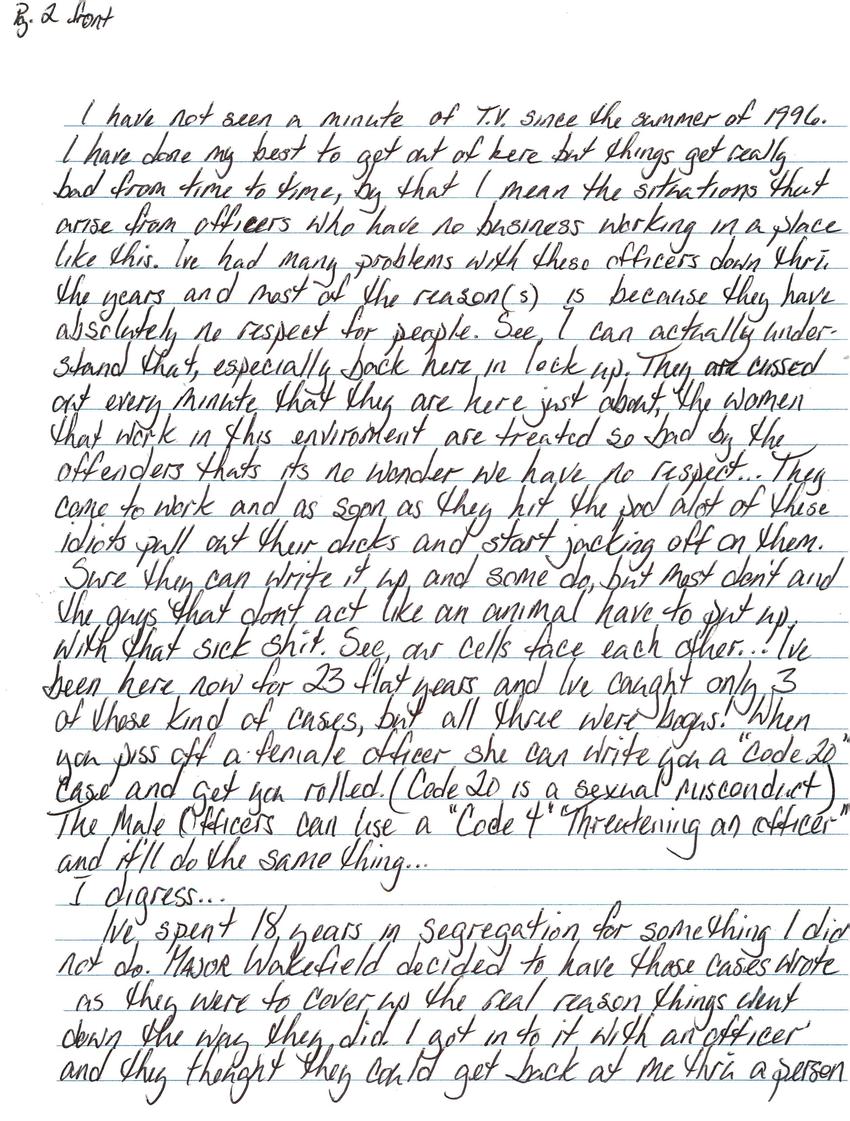 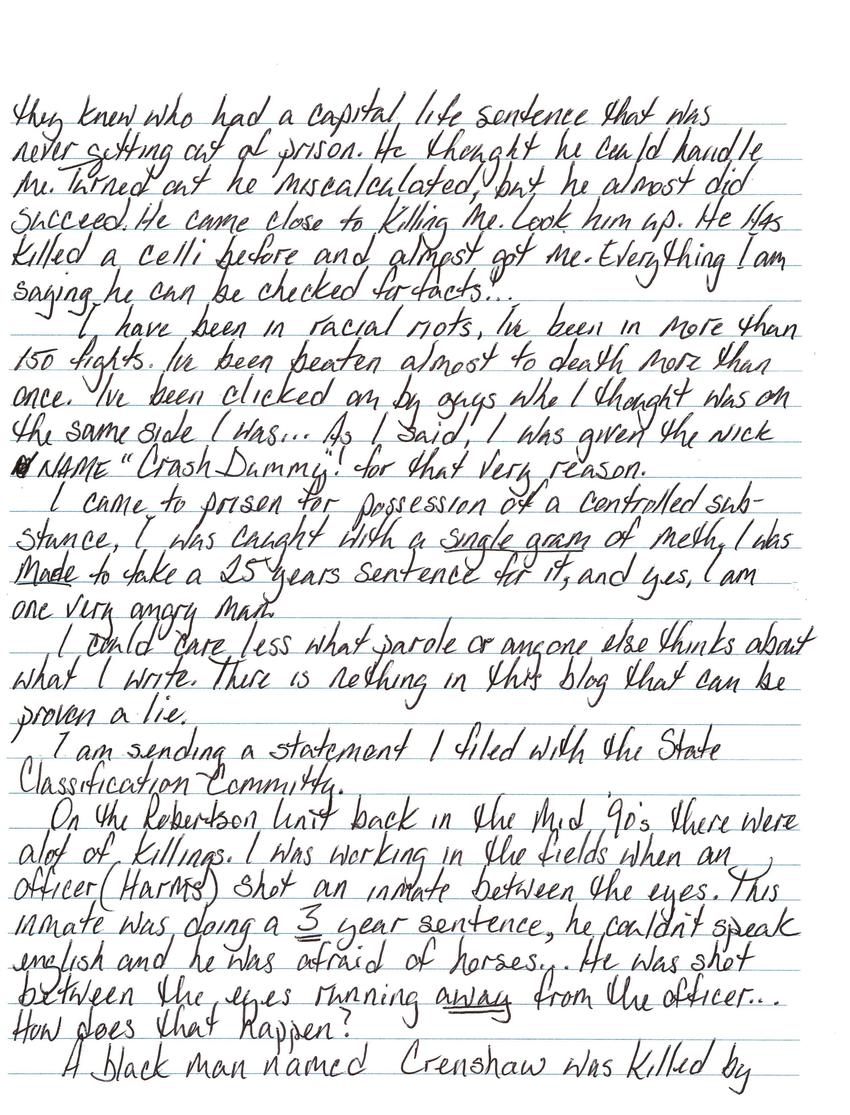 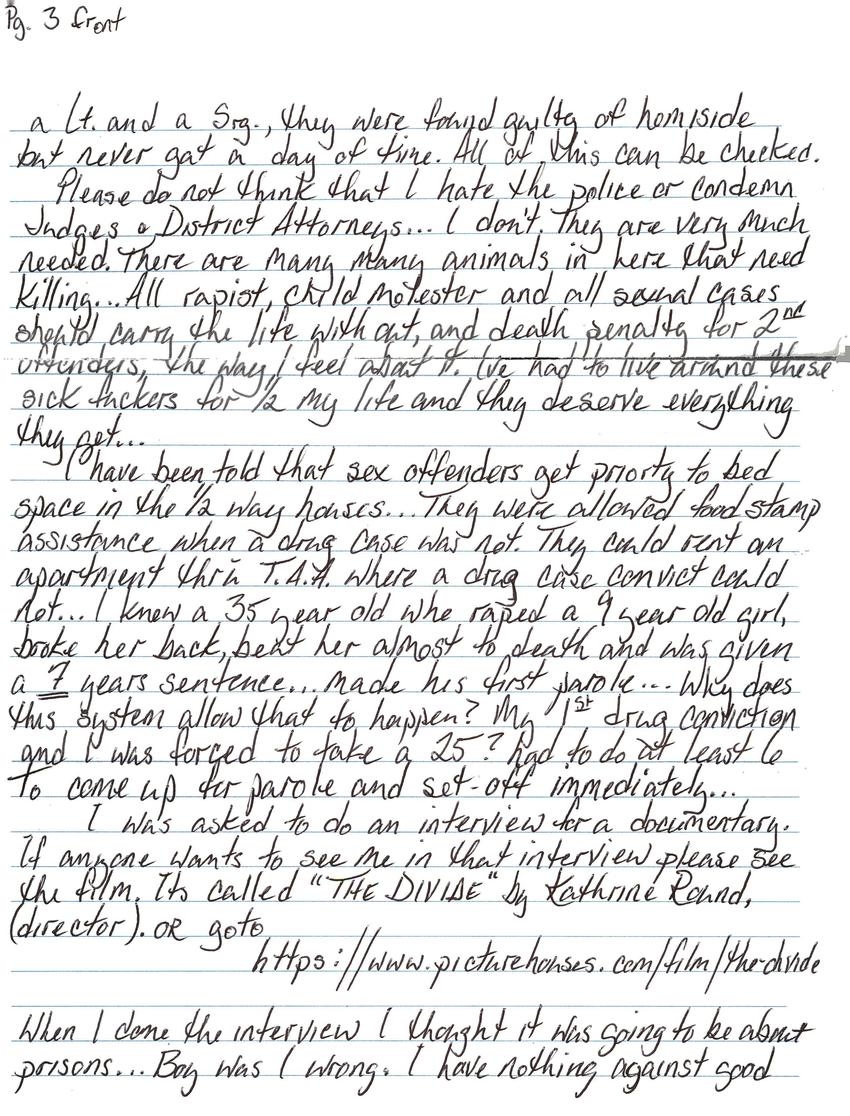 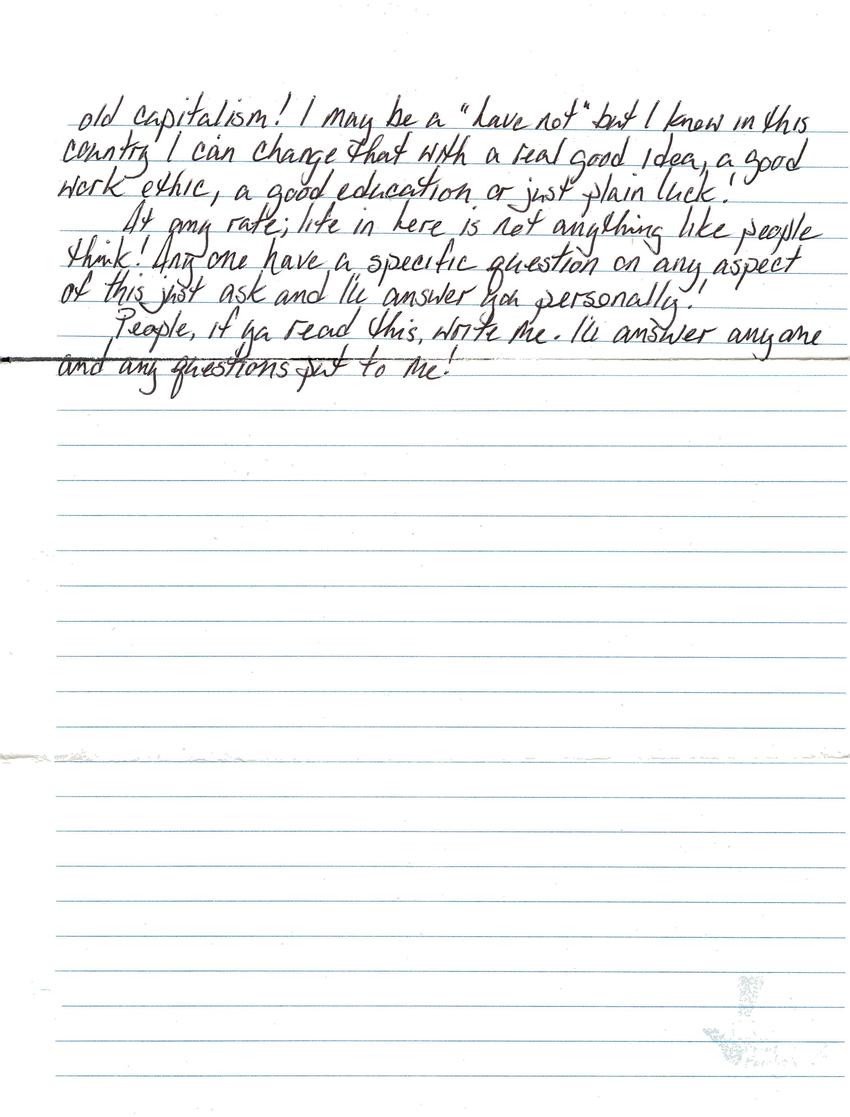 When I done the interview I thought it was going to be about prisons...Boy was I wrong. I have nothing against good old capitalism! I may be a "have not" but I knew in this country I can change that with a real good idea, a good work ethic, a good education or just plain luck!
At any rate; life in here is not anything like people think! Any one have a specific question on any aspect of this just ask and I'll answer you personally!
People, if ya read this, write me. I'll answer anyone and any questions put to me!

STG, I have been told twice in an I-60 that I have not been confirmed as an STG. I would like to know why then I am getting UCC sheets saying different? I want to know from your office in writing if I have been confirmed or not...The paper work that I was found to have did not belong to me and in fact, it was in a large envelope that I was asked to pass for someone else. My name has bns never been, found in any kite or letter to any known member. There is not one shred of proof that I am an active member of any gang or group!
I want to know what evidence is being used to put this jacket on me. There is not a member you know that can tell you my name... That paper work that was found in my cell was in the places it was for the sake of hiding it from incompetent staff members. It took a raid from the STG office to find this and most of it was in the open in order that I could have quick access to it for when it was time to pass it on...
I am not a member of any group or gang. Not AC, WK, TM nor any other racial based gangs. I do not have any tattoos of a gang theme. I have been here for more than 17 flat years and now I am being targeted as a member of a hate group? Stop it! I am not going to wear that jacket for the rest of my life. Its not true. If you have a problem with me having the name of "Norman Smith" in my mail log, then look back to about 1998, I was locked up with him on the Robertson unit. There are many reasons that people can have incriminating paper work in their possession, but that does not mean that they are are a member of that "gang". Have you ever heard my name in the context of gang relations before? I do not think so. In 17 years at no time can you point to a point that I was considered gang relate There is good reason for that...
None of you GI's are fools, or incompetent lackeys...I ask that you really take a closer look at me before you label me with that jacket. In 17 you can not find a kite with my name in it. Ask any member if they can give you any one of my 3 names? William Keith Thomas. This is a plea. I was labeled an escape risk which was nothing short of str8 bullshit, excuse the expletive... I would like to ask for a face to face interview with any one of you... Please consider this request...

OFFENSE DESCRIPTION
ON THE DATE AND TIME LISTED ABOVE, AND AT FM ROBERTSON UNIT,12E-69, OFFENDER: THOMAS,WILLIAM KEITH, TDCJ-ID NO. 00684117, ATTEMPTED TO ESCAPE FROM THE CUSTODY OF TDCJ.

CHARGING OFFICER, ROBERTS, B. CO III SHIFT/CARD: I A

OFFENDER NOTIFICATION.
IF APPLICABLE,INTERPRETER, TIME & DATE NOTIFIED. 2:30PM 1.29.00, BY: (PRINT) [SIGNATURE]
YOU WILL APPEAR BEFORE A HEARING OFFICER 24 HOURS OR MORE AFTER RECEIPT OE THIS
NOTICE. DO YOU WANT TO ATTEND THE HEARING? YES [CIRCLED] NO. IF NOT, HOW DO YOU PLEASE? GUILTY NOT GUILTY [CIRCLED]
OFFENDER NOTIFICAION SIGNATURE [REDACTED].
BY SIGNING BELOW, YOU GIVE UP YOUR RIGHT TO A 24 HOUR NOTICE AND AUTORIZE THE HEARING OFFICER TO PROCEED WITH THE HEARING
OFFENDER WAIVER SIGNATURE [REDACTED] DATE: 1-27-00
HEARING DATE: 2-2-00 TIME: 8:35 TAPE* 387 SIDE#A START#308 END#380
TAPE# SIDE# START# END#

EXPLAIN BELOW BY NUMBER: (1)IF COUNSEL SUBSTITUTE WAS NOT PRESENT DURING PART OF HEARING, (2)IF ACCUSED OFFENDER WAS CONFINED IN PRE-HEARING DETENTION MORE THAN 72 HOURS PRIOR TO HEARING, (3) IF ACCUSED WAS EXCLUDED FROM ANY PART OF THE EVIDENCE STAGE, (4) IF ANY WITNESSES OR (5) DOCUMENTATION WAS EXCLUDED FROM HEARING (6) IF OFFENDER WAS DENIED CONFRONTATION AND/OR CROSS-EXAMINATION,OF A WITNESS AT THE HEARING (7) IF INTERPRETER USED: (SIGNATURE__________):

Re: Presumption of an Escape Attempt

I extend my respects to each and all members of this classification board... I am writing this statement in the hopes that, after more than 10 years, I will be able to show that what was written and presented in this case(s) was a blatant lie and an exaggeration of what really happened, and why it happened. At no time was there ever an attempt to 'escape' from the custody of TDCJ-ID. What follows will prove this to be true...Or at least that is what I am hoping it will do... With that I would like to present the facts of this situation first...
As you can see on the first case it happened at [1:55 (Pm)]. This being in the very middle of the day and the shift. It took place in a [12 Bldg. Seg.] on the French Robertson Unit. The case I am referring to is Case #20000161646.
I was charged with a 01.0 and was found guilty of this charge. I would like to point out that at no time was an inspection made of the door or cell. The door was found to be solid and not tampered with. The proof of this is after I was moved out of that cell it was utilized almost immediately there after. That door was rolled by the officer in the picket...
What happened was this; Another door was rolled along with mine. It belonged to offender Eugene Hernon #453187. The reason for this is, was a few weeks before all of this happened I got into it with an officer named Mrs. Cagle (Cagel)?) and I spit in her face. I was rolled to that cell for this incident. A little while later Offender Hernon shows up. We are both now on the same section and on the same run, (2 row).
I was taken to the shower at about 1:30pm, after I was finished with showering, the officer came over the speaker and told me to go back to my cell and that's when he pop open the shower door for me to do so. When I get back to my cell Offender Hernon was already in there and sitting on my bunk. He stands up and tells me that he and I are going to finish some unfinished business concerning Mrs. Cagle. That is when he told me that he was going to kill me for what I did to Mrs. Cagle.
The fight commenced. I fought, true enough, but I did so out of self defense. That's why I plead not guilty on the following case. I won that fight luckily. This person has killed before and I was not going to be another victim. (Review his disciplinary history)
By this time things did not go like the officer working thought it would. It was officer Corey I believe that set this up with Hernon. When they seen that Hernon was not going to be able to do what he said he would be able to do they had no choice but to get the rank involved. I had refused to go back into my cell and close the door. When the rank showed up, a newly made major was with them. It was Major Wakefield. I was not thinking straight and said some things to him that I should not have...To say the least, it piss. him off...he ordered the officer(s) to write an escape case. I was wrote an escape case at [1:55pm] and within 10 minutes I was written another case for fighting without a weapon, Case #20000161864, at [2:05pm].
The case states that I came out of my cell and assaulted offender Hernon. Why and how was he out of his cell? At the time of this incident there were more than 10 officers on the wing. How is it an escape and a fight? It takes two people to fight and we were both put into cells on F-Wing where both our doors were CHAINED SHUT. This so called "escape" was nothing but a set-up fight that went wrong. There is no evidence, such as door tampering, maps, dyed clothes, ect...to even suggest that this was anything but a fight.
Where was a person to escape to? In the middle of the day, with a pod full of officers, and in one of the most secure prisons in the system? In segregation on top of it all...
I have spent more than 12 years back here over this. I have written to everyone I could think of concerning this matter... If it was such an ESCAPE OR ATTEMPTED ESCAPE, WHY WAS IT NOT TAKEN TO STATE COURT? Charges have been filed on people for nothing more than throwing water on an officer.
I am providing copies of the cases I have sited here. I would like for anyone of you to look them over and see the truth in what I am saying here. I do not have any kind of escape history, from the custody of TDCJ-ID or any Police agency. I have ran from the police a many of times but once caught I have never attempt. to "escape" from them... that is called, (and I am sure you all know this), Evading Arrest. Not ESCAPE!!!

I now have more than 12 years back here in this segregation because of it and I have done none of what I was accused of. I fought for my life and if you think that to be an exaggeration, then look at Eugene Hernon's disciplinary history. In the mid, 1990's, the Robertson Unit was the 3rd. worst prison in the system. With good reason. It takes officers to make that happen, and if you do not believe that then you are very naive to the environment of prison life. Truth be told, I really do not believe that any of you are naive to any of this.
I ask that you, the Classification Committee, take into account what I have said herein and see the truth in it. I am doing my very best to get accepted in the SVORI program. I have spent the entire prime of my life here and I would like to try and rectify some of it...
Please take into consideration what I have presented here. I have done the required 10 years on this designator... Thank you for your time and consideration in this matter....