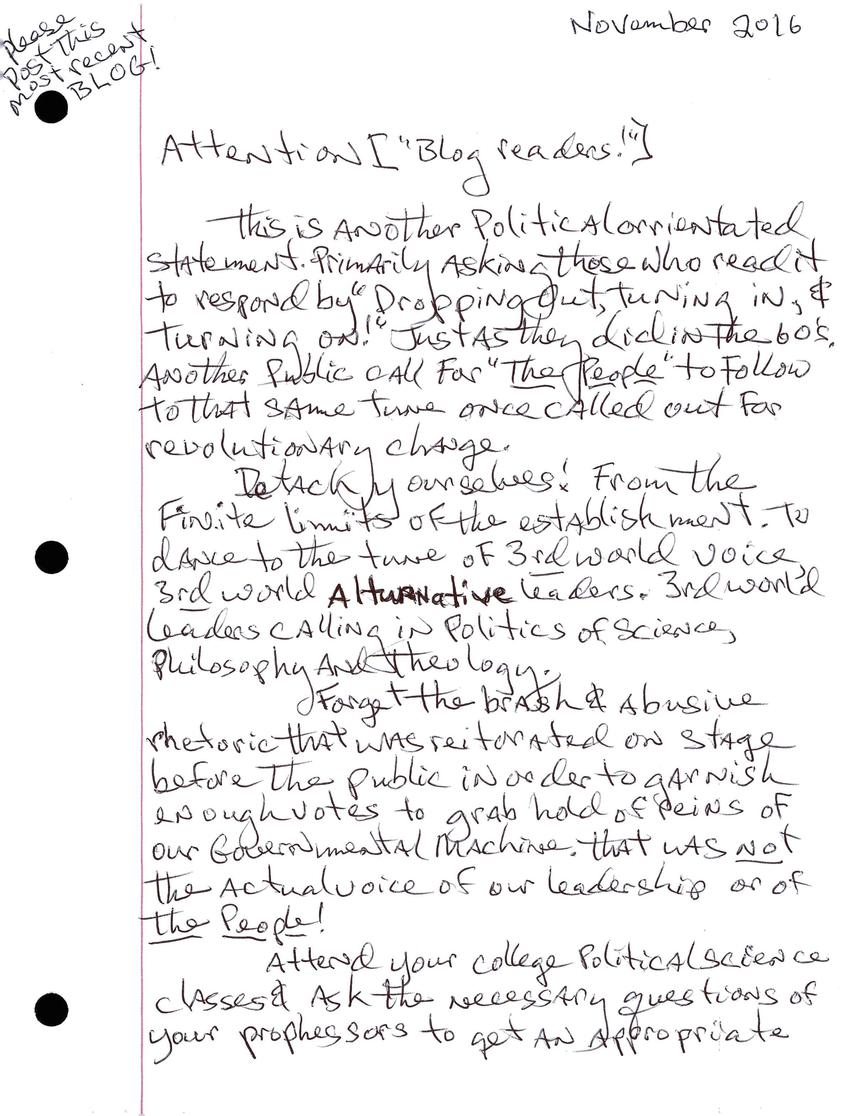 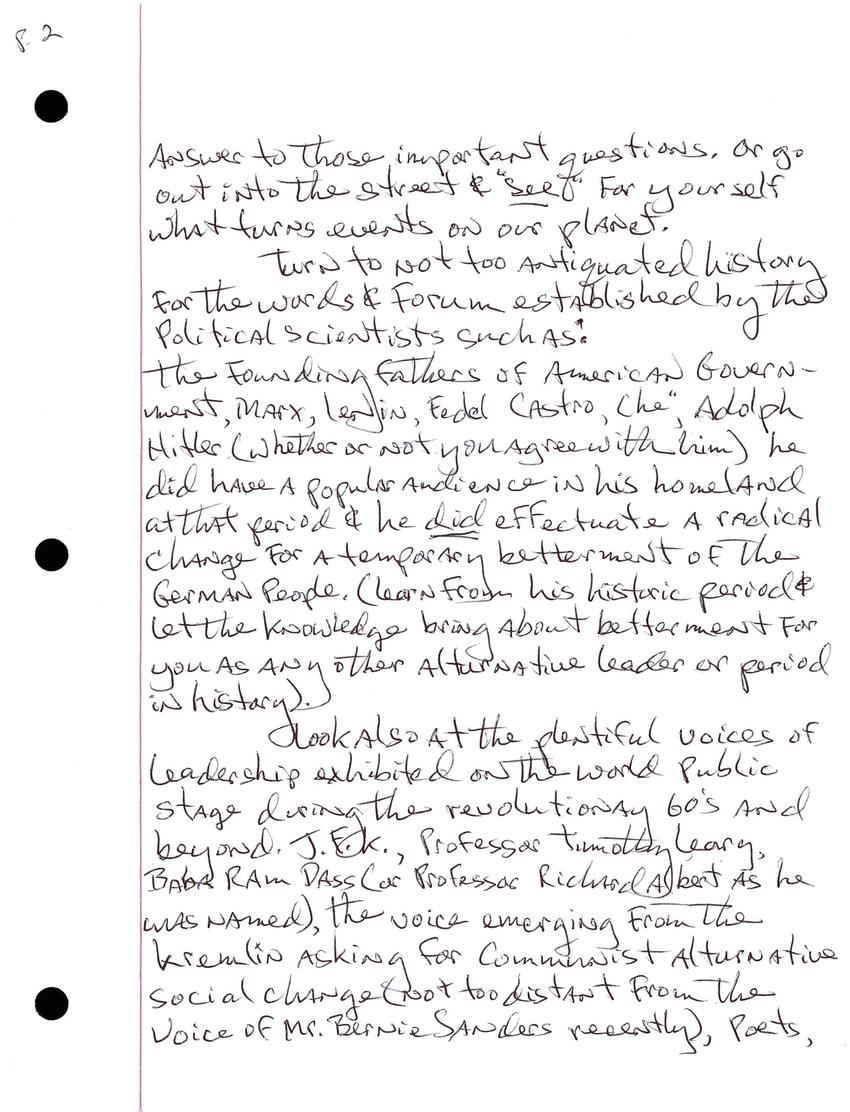 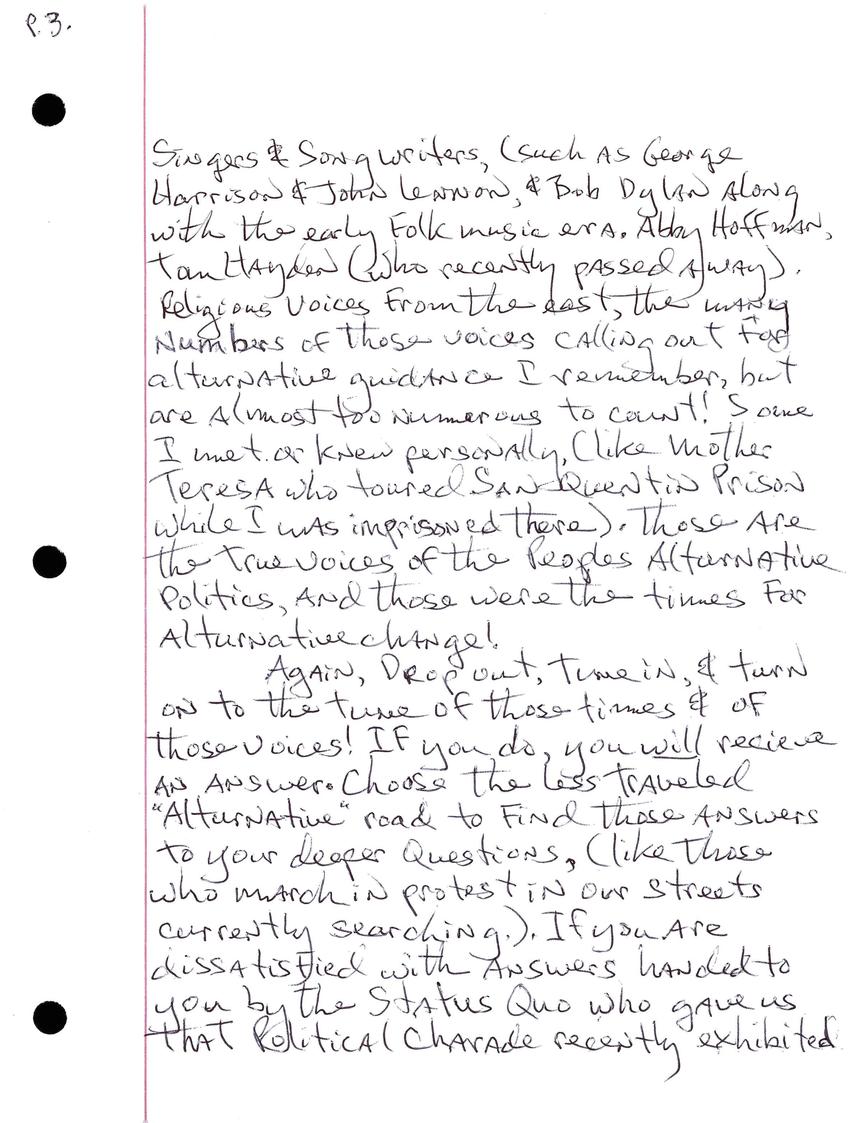 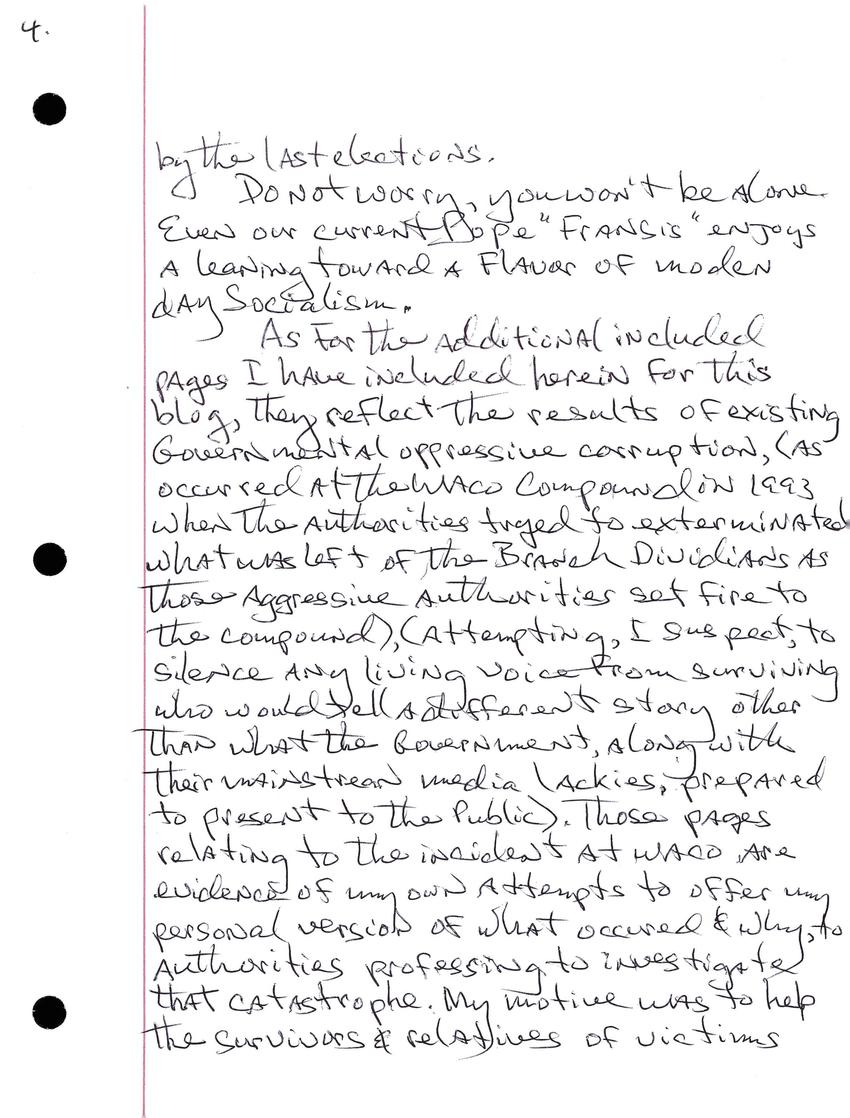 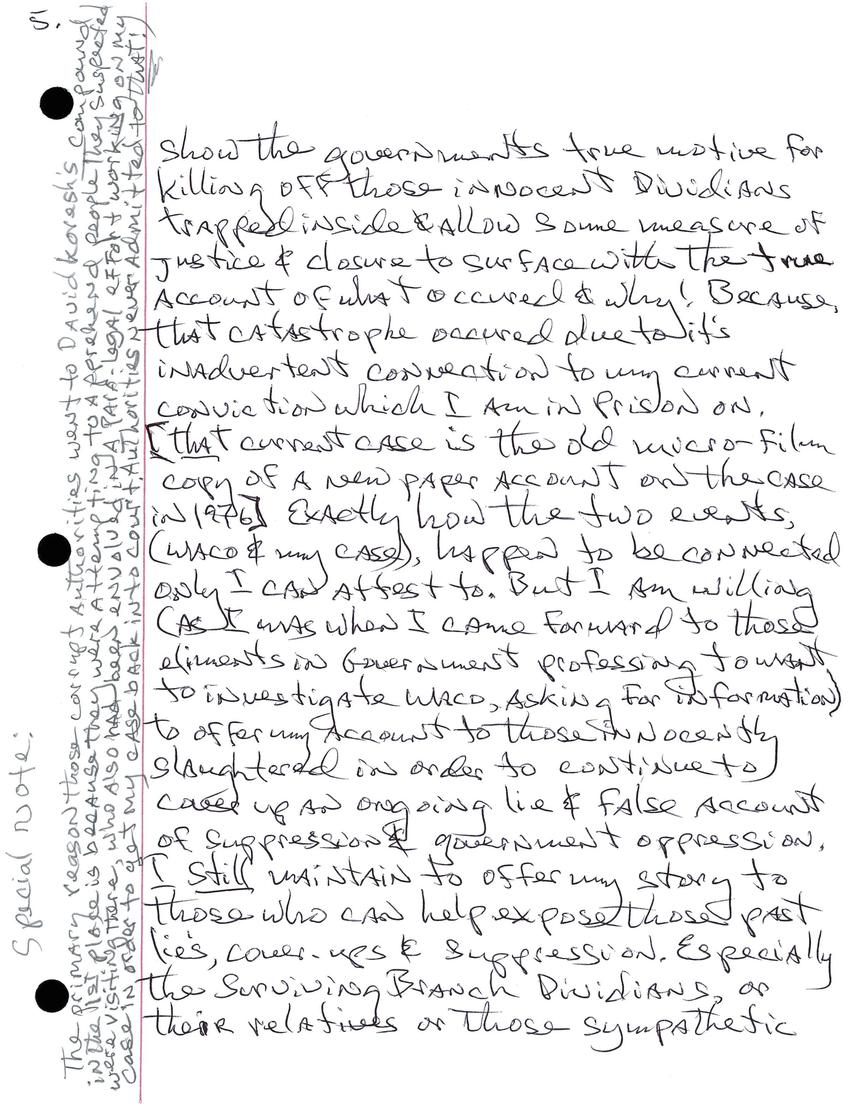 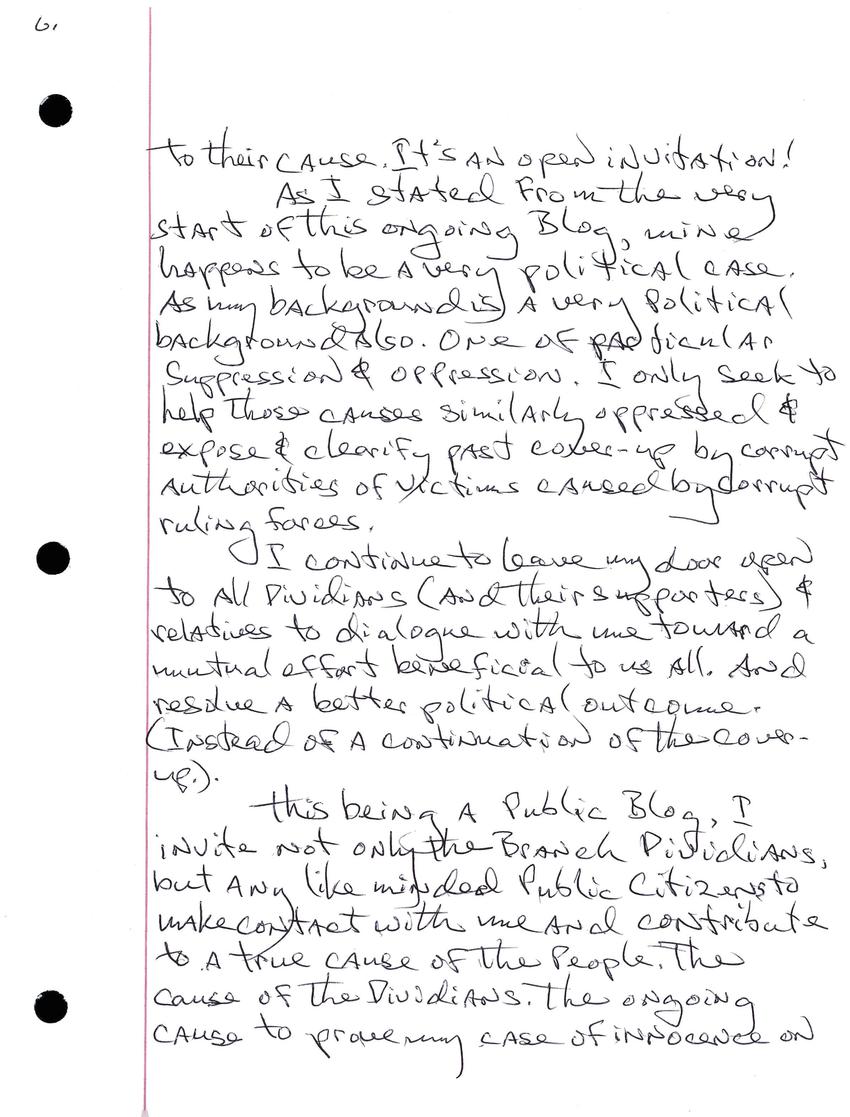 This is another political orientated statement. Primarily asking those who read it to respond by "Dropping out, tuning in, & turning on!" Just as they did in the 60s another public call for "The People" to follow to that same tune once called out for revolutionary change.
Detach ourselves! From the finite limits of the establishment. To dance to the tune of 3rd world voice 3rd world alternative leaders. 3rd world leaders calling in politics of science, philosophy and theology.
Forget the brash & abusive rhetoric that was reiterated on stage before the public in order to garnish enough votes to grab hold of reins of our governmental machine. That was not the actual voice of your leadership or of the people!
Attend your college political science classes & ask the necessary questions of your professors to get an appropriate answer to those important questions. Or go out into the street & "see" for yourself what turns events on our planet.
Turn to not too antiquated history for the words & forum established by the political scientists such as:
The founding fathers of American government, Marx, Lenin, Fedel Castro, Che, Adolf Hitler (whether or not you agree with him) he did have a popular audience in his homeland at that period & he did effectuate a radical change for a temporary betterment of the German people. (Learn from his historic period & let the knowledge bring about betterment for you as any other alternative leader or period in history.)
Look also at the plentiful voices of leadership exhibited on the world public stage during the revolutionary 60s and beyond. J.F.K., Professor Timothy Leary, Baba Ram Dass (or Professor Richard Albert as he was named), the voice emerging from the kremlin asking for communist alternative social change (not too distant from the voice of Mr. Bernie Sanders recently), poets, singers & songwriters, (such as George Harrison & John Lennon, & Bob Dylan along with the early folk music era. Abby Hoffman, Tom Hayden (who recently passed away.) Religious voices from the past, the waning numbers of those voices calling out for alternative guidance I remember but are almost too numerous to count! Some I met or knew personally, (like Mother Teresa who toured San Quentin Prison while I was imprisoned there). Those are the true voices of the peoples alternative politics, and those were the times for alternative change!
Again, drop out, tune in, & turn on to the tune of those times & of those voices! If you do, you will receive an answer. Choose the less traveled "alternative" road to find those answers to your deeper questions, (like those who march in protest in our streets currently searching.). If you are dissatisfied with answers handed to you by the status quo who gave us that political charade recently exhibited by the last elections.
Do not worry, you won't be alone. Even our current Pope "Francis" enjoys a leaning toward a flavor of modern-day socialism.
As for the additional included pages I have included herein for this blog, they reflect the results of existing governmental oppressive corruption, (as occurred at the Waco Compound on 1993 when the authorities tried to exterminate what was left of the Branch Dividends as those aggressive authorities set fire to the compound), (Attempting, I suspect, to silence any living voice from surviving who would tell a different story other than what the government, along with their mainstream media lackeys, prepared to present to the public). Those pages relating to the incident at Waco, are evidence of my own attempts to offer my personal version of what occurred & why to authorities professing to investigate that catastrophe. My motive was to help the survivors & relatives of victims show the government's true motive for killing off those innocent Davidians trapped inside & allow some measure of justice & closure to surface with the true account of what occurred & why! Because, that catastrophe occurred due to it's inadvertent connection to my current conviction which I am in prison on. (that current case is the old micro-film copy of a new paper account on the case in 1976) Exactly how the two events, (Waco & my case), happen to be connected only I can attest to. But I am willing (as I was when I came forward to these elements in government profession to want to investigate Waco, asking for information) to offer my account to those innocently slaughtered in order to continue to cover up an ongoing lie & false account of suppression & government oppression. I still maintain to offer my story to those who can help expose those past lies, cover-ups & suppression. Especially the surviving Branch Dividians or their relatives or those sympathetic to their cause. It's an open invitation!

(Special Note: The primary reason those corrupt authorities went to David Koresh's compound in the 1st place is because they were attempting to apprehend people they suspected were visiting there, who also had been involved in a para-legal effort & working on my case in order to get my case back into court. Authorities never admitted to that!)

As I stated from the very start of this ongoing blog, mine happens to be a very political case. As my background is a very political background is also one of particular suppression & oppression. I only seek to help those causes similarily oppressed & expose & clarify past cover-up by corrupt authorities of victims caused by corrupt ruling forces.
I continue to have my door open to all Dividians (and their supporters) & relatives to dialogue with me toward a mutual effort beneficial to us all. And residue a better political outcome. (Instead of a continuation of the cover-up.).
This being a public blog, I invite not only the Branch Dividians, but any like minded public citizens to make contact with me and contribute to a true cause of the people. The cause of the Dividians. The ongoing cause to prove my case of innocence on my conviction, (whereby I was set-up by corrupt authorities who sought to oppress my actual political ambitions the short while I was out on parole in 1976). Or both those combined efforts, (of my case and indicating the Dividian massacre. Along with any & all peoples struggles involving alternative policies as aforementioned herein. Comrades certainly welcome! (past or present) I welcome them all.
In the struggle!

Being that both my conviction, and the catastrophe at Mt. Carmel were related & both involved illegal Post script: (OR! An independent commission of private citizens &/or legal establishment executions.) suppression of the truth, (along w/ suppression of evidence), I continue to call for a full investigation into both by a "fair government agency.